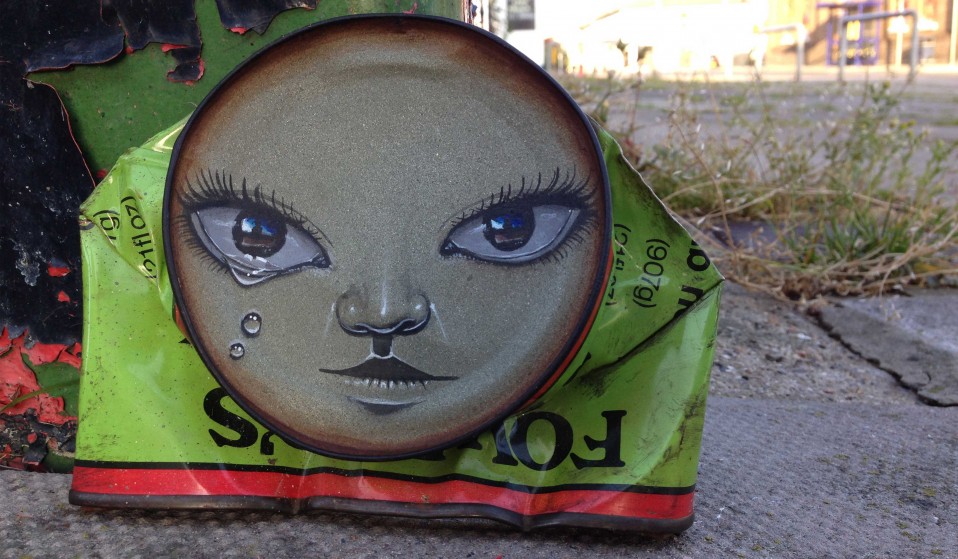 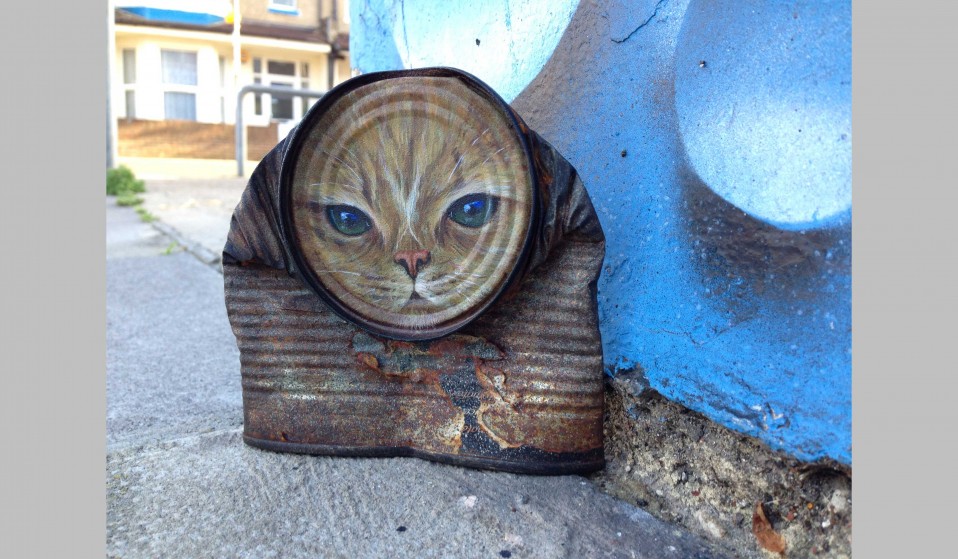 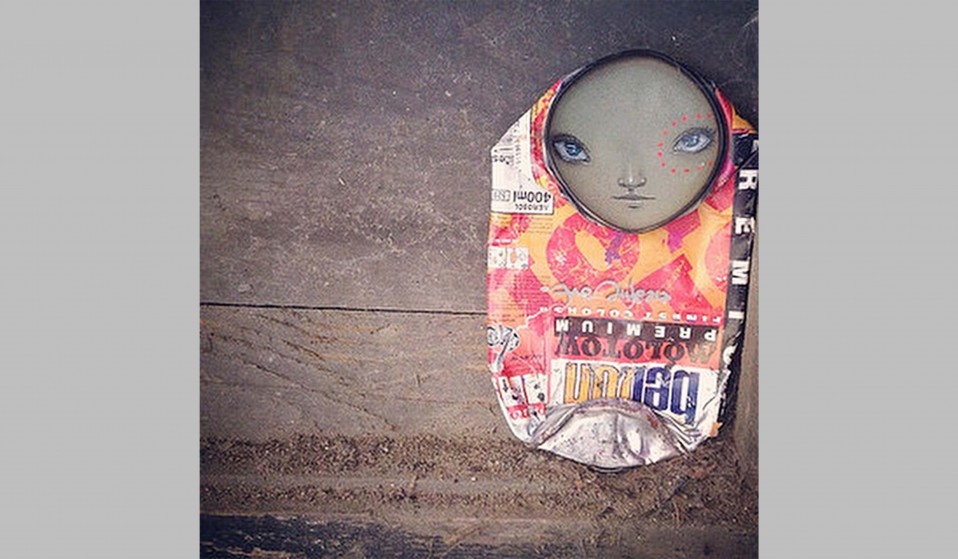 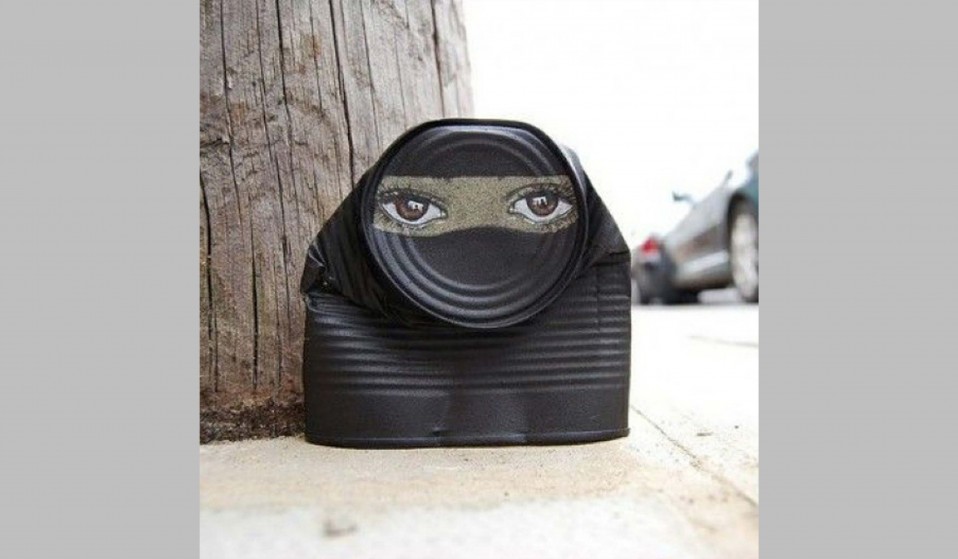 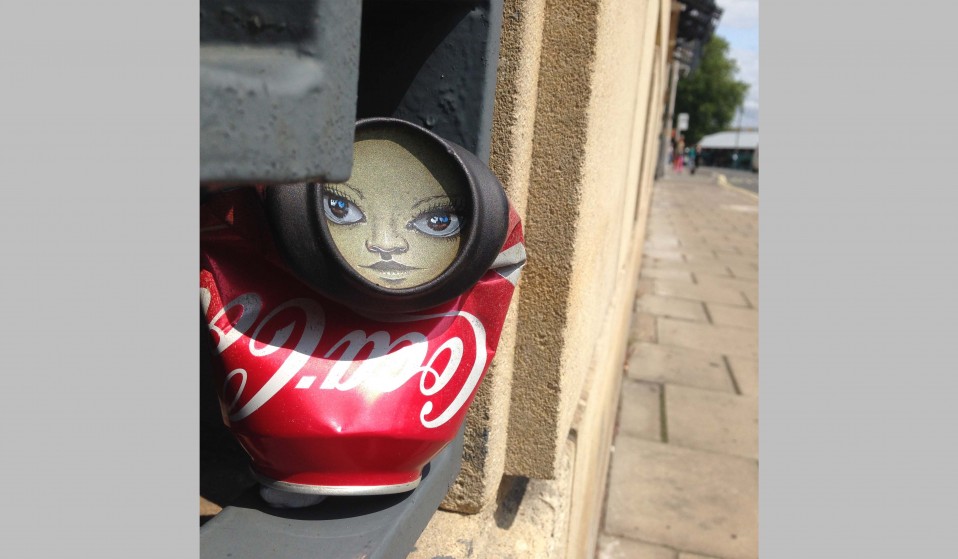 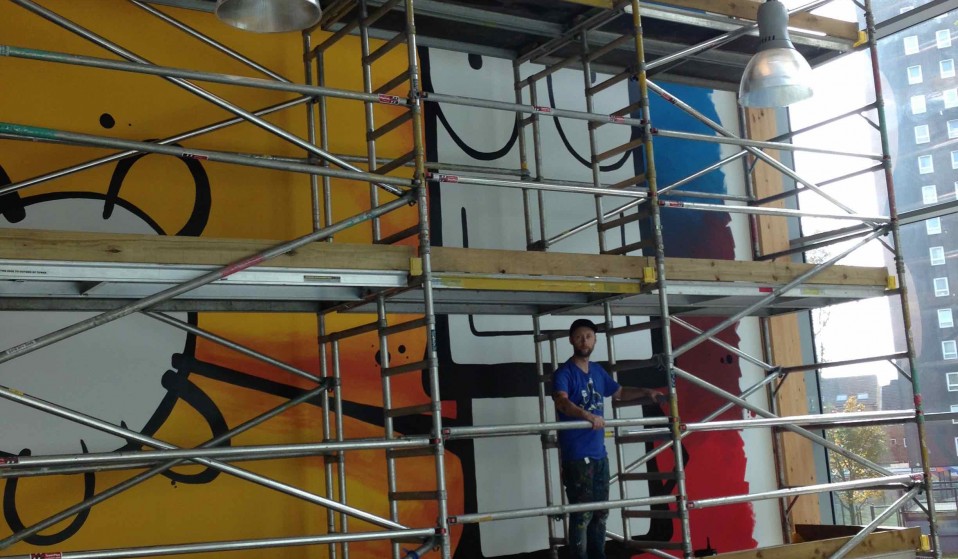 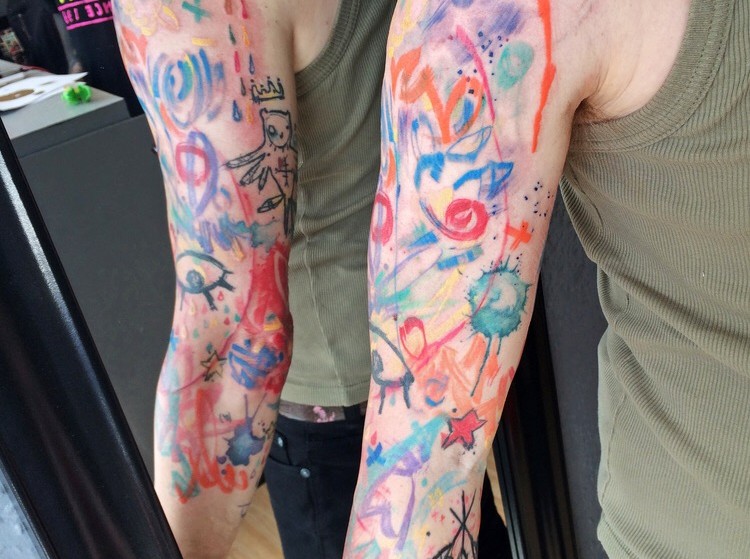 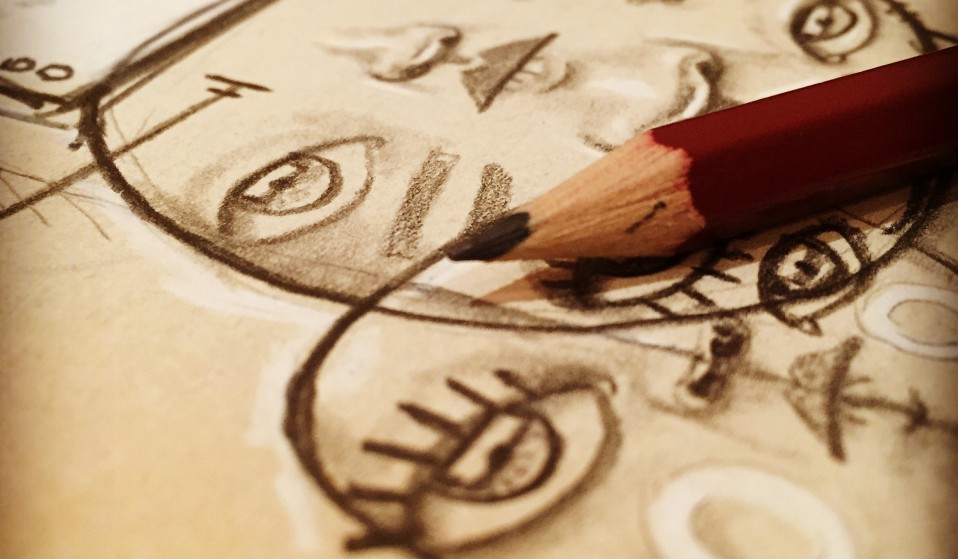 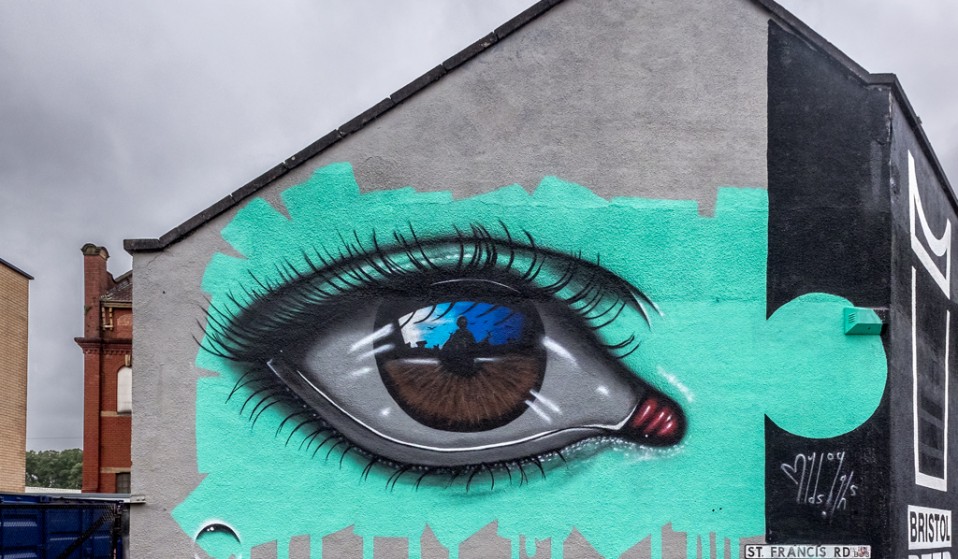 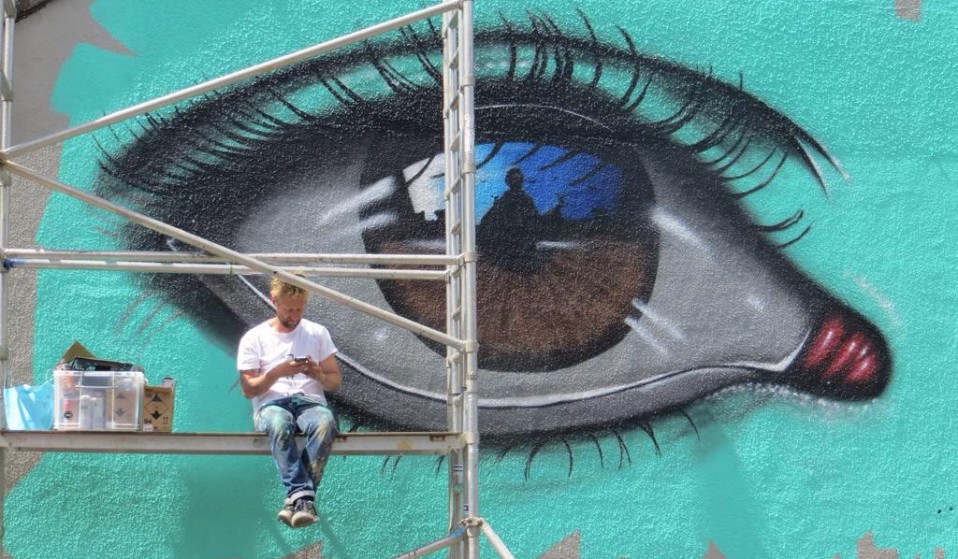 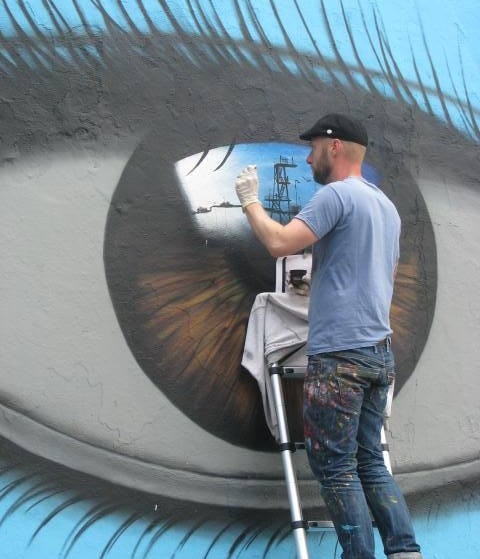 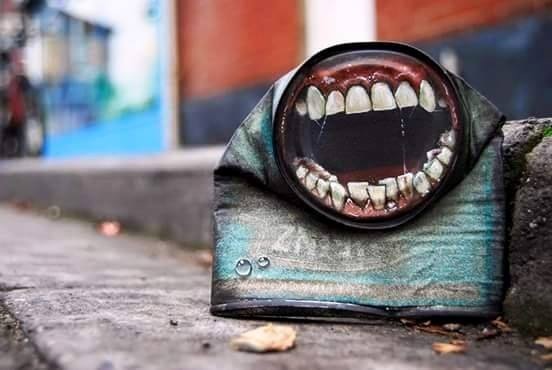 My Dog Sighs explains the struggle of leaving his artwork behind for others and shares his influences and inspirations with Huck.

My Dog Sighs explains the struggle of leaving his artwork behind for others and shares his influences and inspirations with Huck.

For thirteen years, artist My Dog Sighs has been leaving pieces of his work on the street for anyone to pick up.

Where street artists usually look for the most visible walls in the hope their pieces will be seen by as many people as possible, My Dog Sighs puts his painted tin can figures in less obvious locations – to be discovered only by eagle-eyed passersby.

My Dog Sighs is a street and urban artist based on England’s south coast, whose work explores the idea of loss and discovery.

Ahead of his solo show, Quiet Little Voices at Play Dead in Southsea, we hit him up for his influences and inspirations.

1. The act of letting go

For a long time now I’ve run a street project called Freeartfriday. It was my way of stepping into the world of street art, but without the issues of illegality and vandalism. I quietly place, some thing I’ve painted that week, on the streets to be found by an unsuspecting passerby.

As time has gone on I’ve developed my work to echo the strong emotional pull of leaving something I’ve invested both time and heart into onto the street to fend for itself. Tin cans are personified with lonely and melancholic expressions wit the aim to tug at a strangers heart strings in the hope that they won’t be able to pass by. It’s a killer sometimes to leave my work and walk away but it’s also incredibly liberating and cathartic.

Music is an important part of the creative process for me. My studio has music playing constantly. I’ve got a lovely old turntable in there and I can’t help but be inspired by the sounds and lyrics that reach into me while I’m painting.

Some times you hear a song or even just a snippet and it just gets stuck in your head and consumes you. I occasionally take advantage of that and use it as the inspiration for a piece or even a complete body of work. For a recent show in Italy, the entire show was based around and named after by an old Fun Boy Three song ‘Our Lips Are Sealed’. Titles of the pieces came from the lyrics and the song became a soundtrack to the show.

I’m currently stuck on a song by a band called We Were Promised Jet Packs called ‘Quiet Little Voices’ and for almost the entire time I’m working on pieces for the show the song is on loop. I can’t explain the energy that is created when you hear a song that just fits everything about the creative process your in the middle of exploring.  It gives me shivers.

3. The ephemeral nature of street art 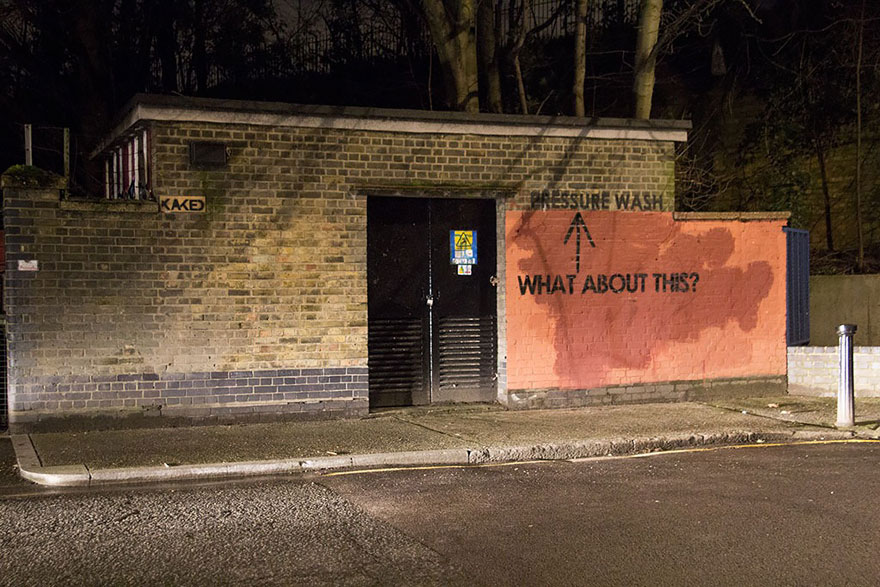 If sat too still for too long, art becomes wallpaper and disappears. But street art is so ephemeral. Time slowly eats away at work and walls get buffed and repainted. Places that embrace street art display a moment in time, be it political, social or aesthetic.  I love to see the way artists express themselves so immediately with their art and how over time new messages appear and eventually cover and destroy work. One artist who cleverly plays with the idea of ephemeral art is Mobstr. His toying with the authorities who clean and buff the talking walls is so simple yet so inspired.

Herakut are a German duo whose painting makes the hairs on the back of my neck stand up. Originally two street artists in their own right, they joined forces a few years ago to create the most beautiful work. Hera approaches the wall with a  mix of loose, drippy almost raw composition. Her fragile characters almost plead for you attention. Erkut’s part in the duo is to pick the smallest elements in Hera’s loose sketchy lines and define them in an almost photorealistic brilliance. This marriage of looseness and perfection, for me, is the ultimate goal.

I stumbled across Funns a good few years ago. As such a young kid, I saw a freshness in his style of painting that excited me. His naive almost Basquait paintings seemed so much older than his years. Over time he picked up a tattoo gun and I knew who I wanted to do my tattoo sleeve. It’s really exciting to offer up your whole arm and let someone produce something completely different with it. It’s still work in progress but I love it.

Linkedin
OTHER ARTICLES
With skyrocketing rents, packed out viewings, bidding wars and more, renting in London has never been harder.
The two-day long event returned to London this year, showcasing a spectacular parade, steel bands and Caribbean food.
Financial turmoil is pushing people who work in the sex industry into more dangerous and desperate situations as a means of survival.
By turning a real-life crisis into daytime television fodder, TV bosses have once again shown themselves to be completely out of touch with audiences.
Yesterday thousands gathered outside Buckingham Palace after news of the Queen’s death broke.
Thousands attended the annual event this year to wheelie through the city and call for ‘knives down, bikes up’.