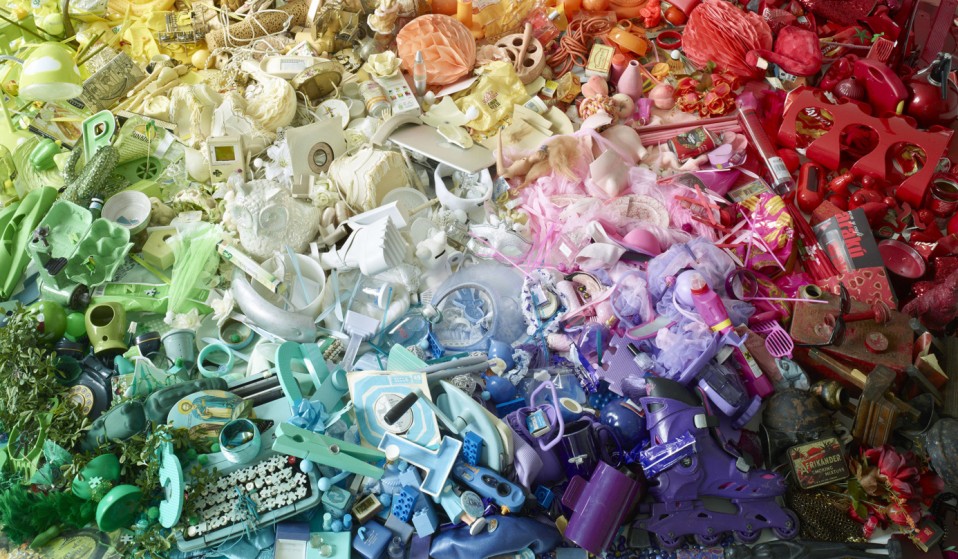 Online editor at creative inspiration title It's Nice That on her personal favourite artists from the last year.

Online editor at creative inspiration title It's Nice That on her personal favourite artists from the last year.

I fell head over heels for Rist at her 2011 Hayward retrospective Eyeball Massage, and her new show at Hauser & Wirth proved that whatever the space, her work is an utter pleasure. Without sounding too earnest/hippyish/daft, only at Rist’s shows have I felt such a unity with others viewing the work – in no small part due to the fact she forces her viewers to lay on the floor, shoeless, rather than jostling for space in front of wall-mounted works. Though everyone will draw something different from her huge, surreal video pieces; everyone is united in the same utter sensory envelopment they offer, making her work go far beyond the visual and into something that feels much, much deeper.

I had the pleasure of meeting Barry Hale from Threshold Studios again this year, and the man’s thirst for technology-driven art, and his desire to help others feel the same at Thredshold Studios, is utterly inspiring. At this year’s Kinetica Art Fair he was showing a brilliant piece that’s been in the pipeline for a good 20 years, 63|3D, which used a 1960s Stereoscopic 3D arcade viewer to show Abraham Zapruder’s 8mm home movie of the Kennedy assassination in a way that’s brilliantly innovative, effective, and rather chilling.

In a year where discourse about feminism has exploded into our consciousness in ways of varying credibility, one of the standout exhibitions exploring the theme was at Richard Saltoun Gallery. It showed work by Freidl Kubelka, a Vienna-based artist who, in a pre-internet era, seemed to predict two of the biggest concerns of 2014 – feminism and selfies. The gallery showed her Jahreportraits (Year Portraits) project, which began in 1972 and saw her take a picture of herself daily for a year, with the process repeated every five years. 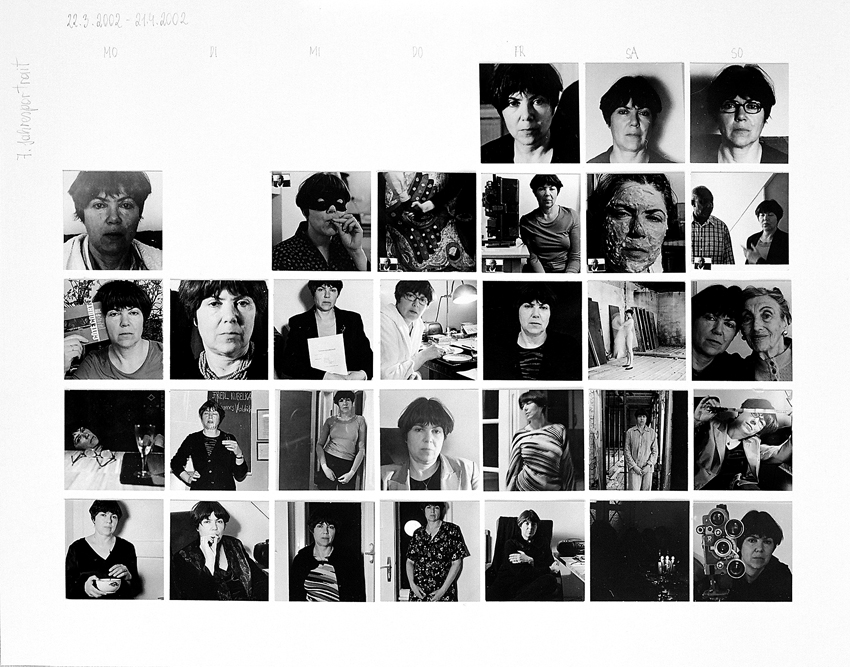 Chinneck has managed quite a tricky feat this year – making public art that it seems hardly anyone railed against. His standout project was his levitating house, which sat in Covent Garden piazza. Entitled ‘Take my lightning but don’t steal my thunder’, the piece uses optical illusion to create the sense that a house designed to be in-keeping with the area’s Georgian buildings is floating in mid air. Better than those chaps dressed as sad little Yodas any day. 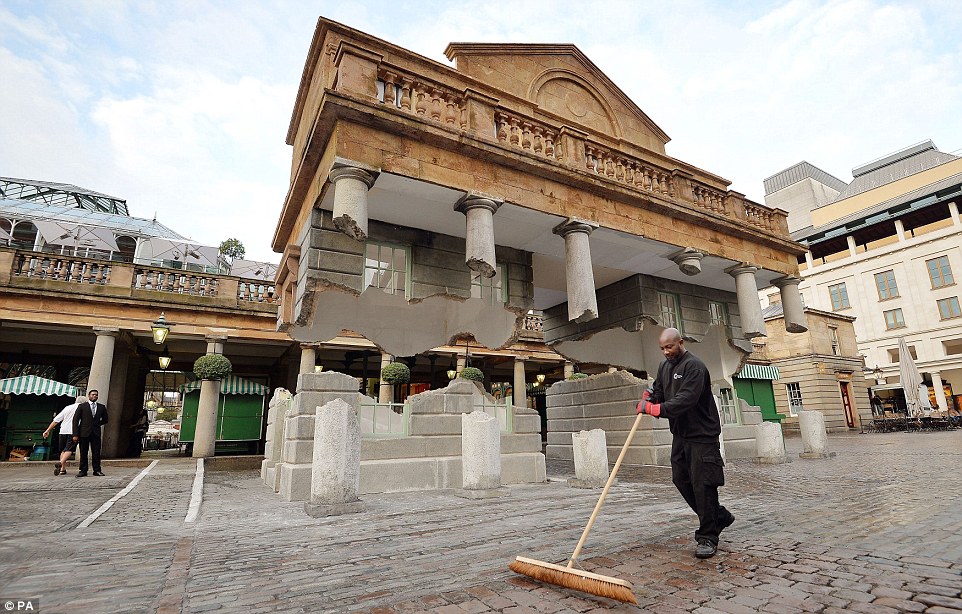 The undoubted highlight of this year’s London Design Festival for me was, rather oddly, by the artist Dan Tobin Smith. His piece ‘The First Law of Kipple’ was a mind-blowing maze of junk, arranged by colour within his studio with only a path to guide you through the car-boot of creativity and crap spread out across the floor. 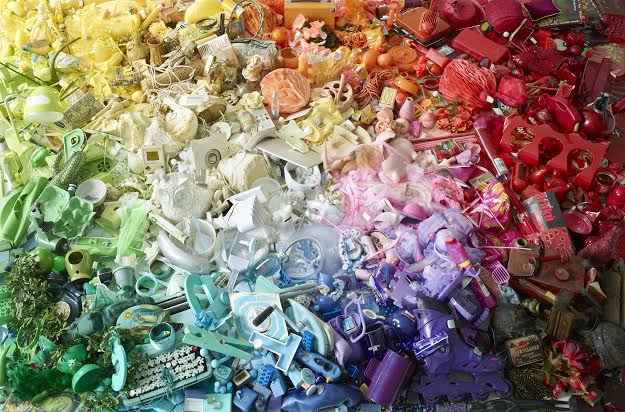 I heard about Joe from the Photo50 section of this year’s London Art Fair, and really loved his collaged digital pieces. I don’t know too much about Joe to be honest, but there’s something about his work that means I could happily flick through his site of video pieces and digital collages for ages. 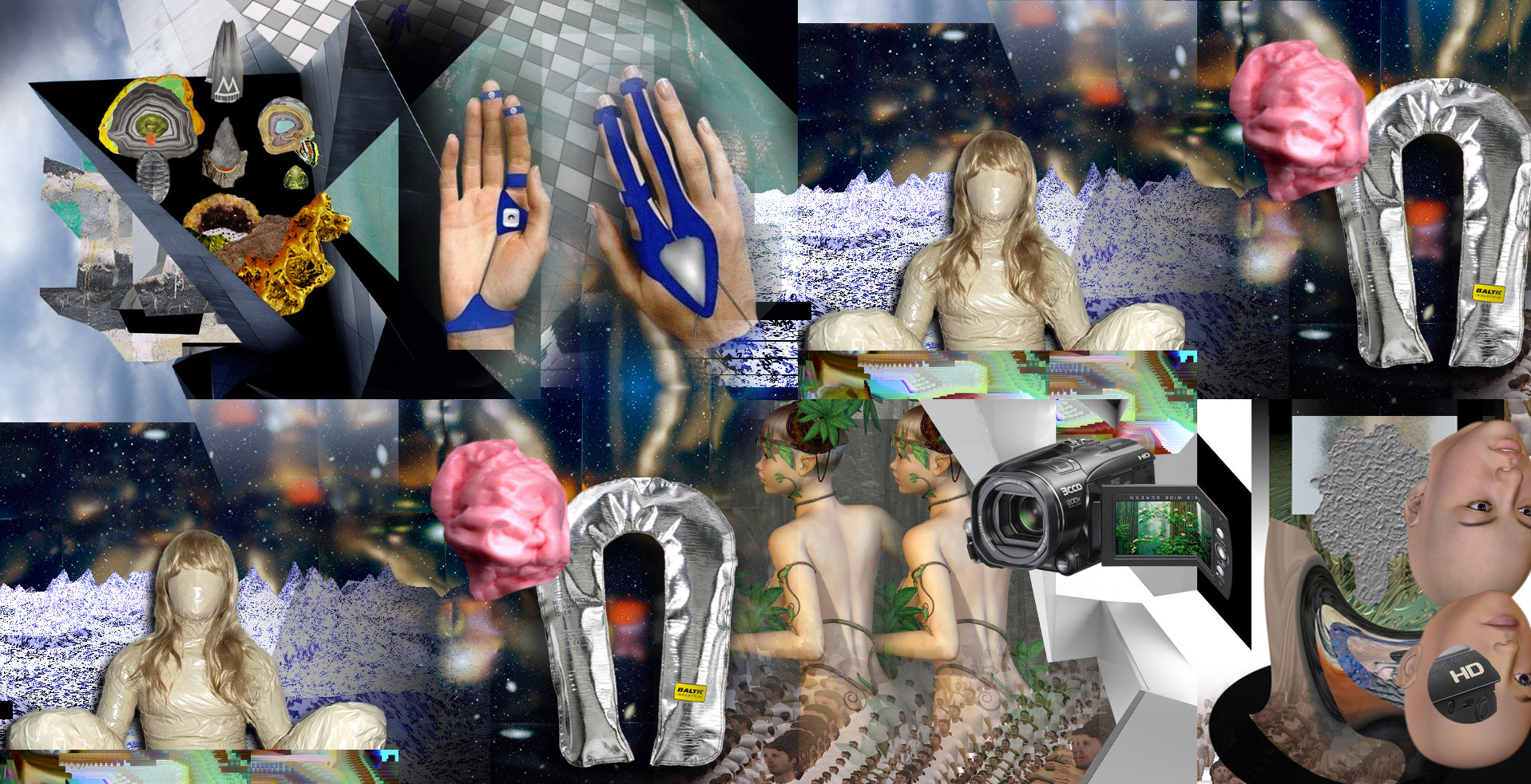 I really admire Stuart, both as an artist and as someone who’s very open about mental health issues, encouraging others to be the same. It sounds cheesy, but it’s a very important thing. I think Stuart’s work is brave in its style – it might not be the most fashionable, but he does everything with such heart, conviction and skill. His incredible 2013 show was all about floating bubble clouds and huge trampolines, and to take a step back with this year’s show Anxiety Generation and make it all about paintings again felt brave, looked great, and felt very “Stuart”. 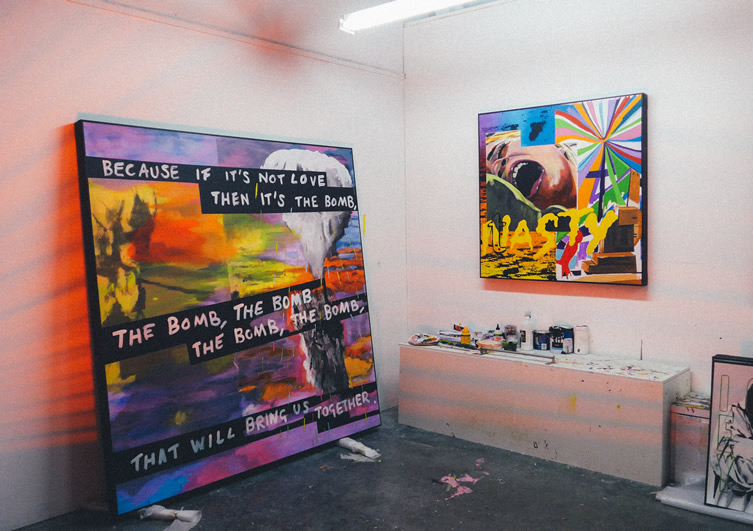 I know very little about photography, but was blown away by Philip Lorca-Di Corcia’s show at the Hepworth Wakefield, and it felt like just the right time to hold this vast retrospective of work. There are so many photographers who either knowingly or unknowingly ape his style, and having these images from throughout his career showed his huge talent for taking photographs that are rarely what they seem. Each creates its own narrative but crucially also forces the viewer to create their own. 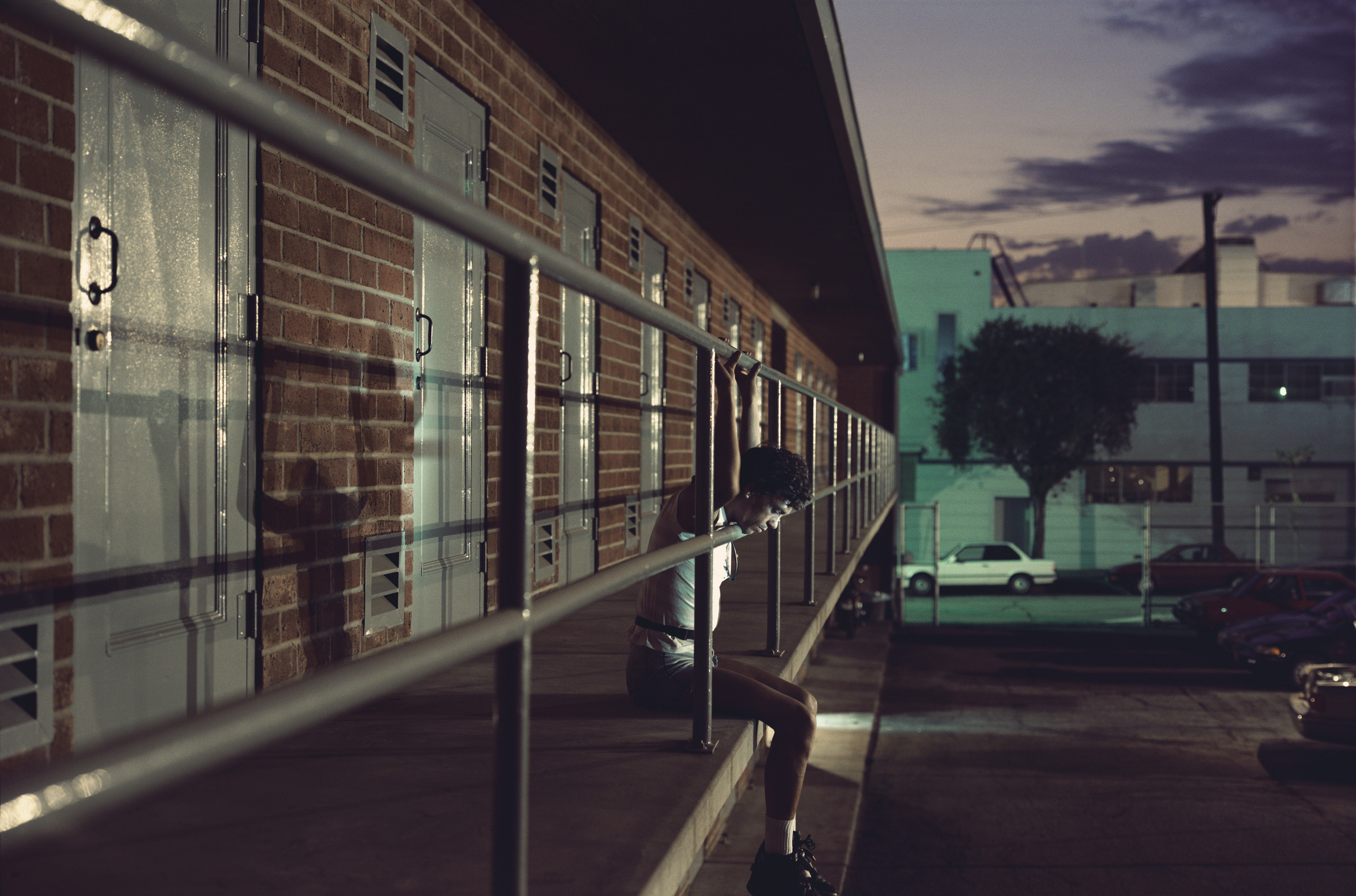 It’s such an obvious choice, but I suppose that’s for a reason. I think Deller’s skill lies in the fact that when you think of the artist, you don’t conjure one image or style – his work is more a commentary, or a harnessing of ideas – ones that are breathtakingly wide-ranging and thought-provoking. With both the brilliant show at the William Morris gallery and the curation of Love Is Enough at Modern Art Oxford this year, it seems his status as one of the most important artists of recent years is more than cemented. 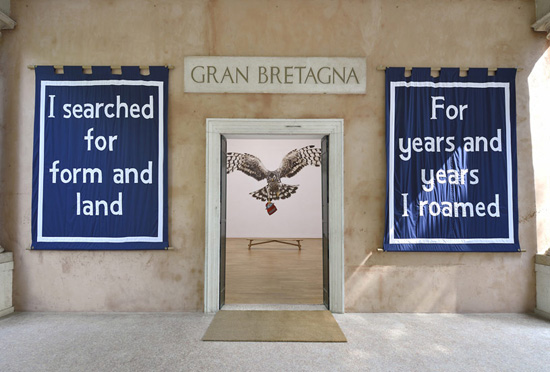 I wasn’t going to put these two in. Again, they’re so obvious. And while I loved their show at the Jerwood Gallery in Hastings, I just can’t get as excited about them as some people. But then I saw this. It made me rethink them as artists, and about their place in 2014 – a year where I’ve felt that there’s been a bit of a shift in how they’re seen, what they’re doing and why they’re doing it. Of COURSE their work all terribly obvious tropes of despair and hideousness and all the worst things in the world: they know exactly what they’re doing, and there isn’t really anyone else doing that, or at least doing it like they are. That’s what their Jerwood show – and this GIF – told us in brutal, moving, and often hilarious ways.

See more of our ‘best of’ lists.

Linkedin
RELATED ARTICLES
OTHER ARTICLES
Editor at Don't Watch That – internet TV station founded by champions of East London underground Tim and Barry – on the party tracks of the year.
Cyclist, publisher and entrepreneur Juliet Elliott on her top bike-related happenings of 2014.
Writer, musician and activist Bryony Beynon, who co-directs Hollaback London – an org to end street harassment – curates the most inspiring acts of activism in 2014.