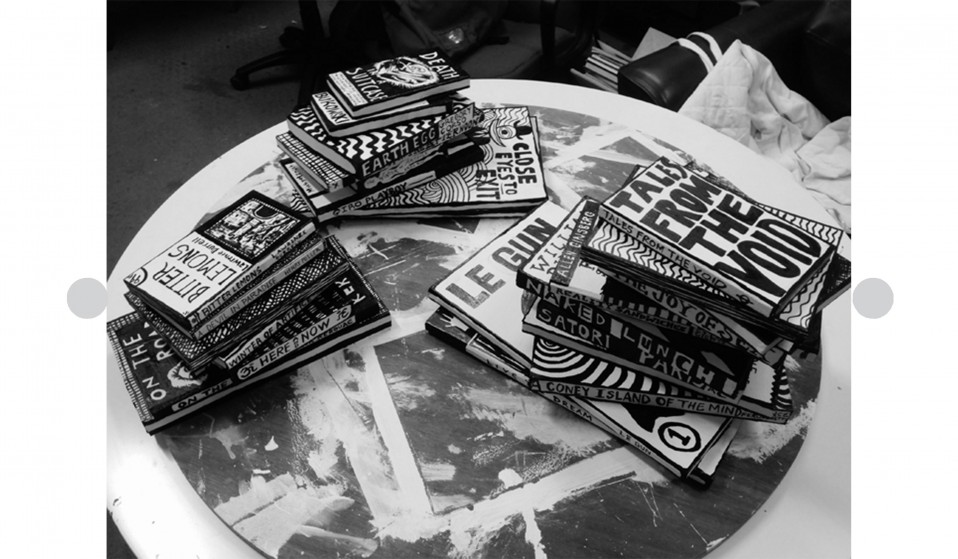 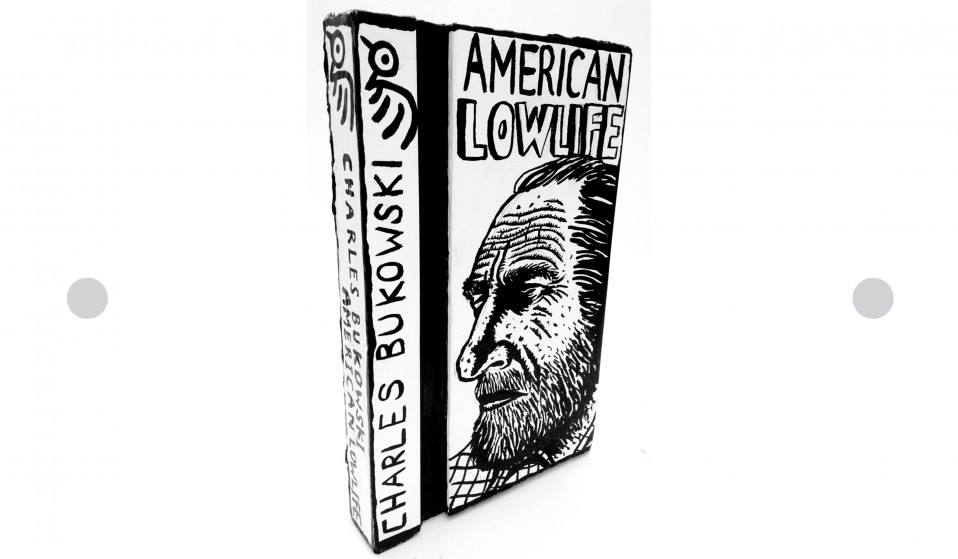 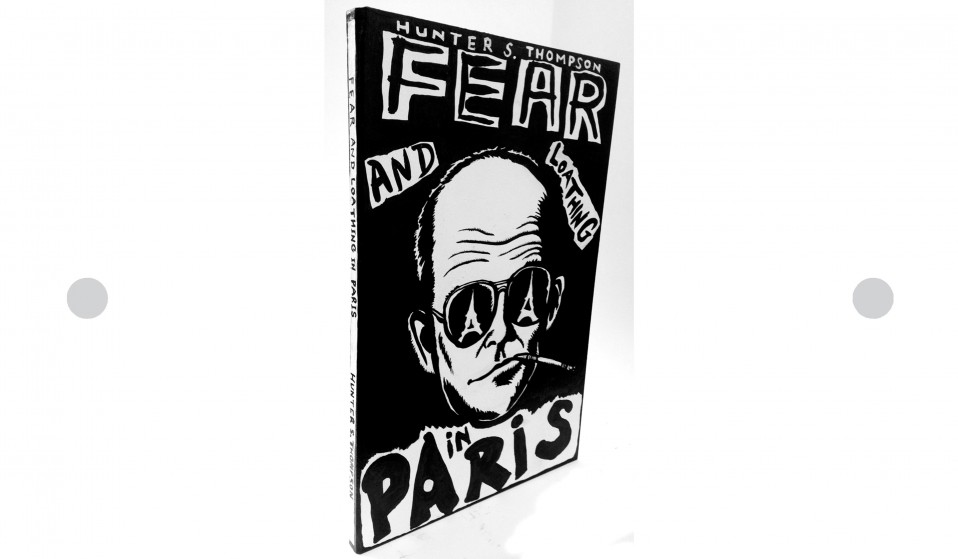 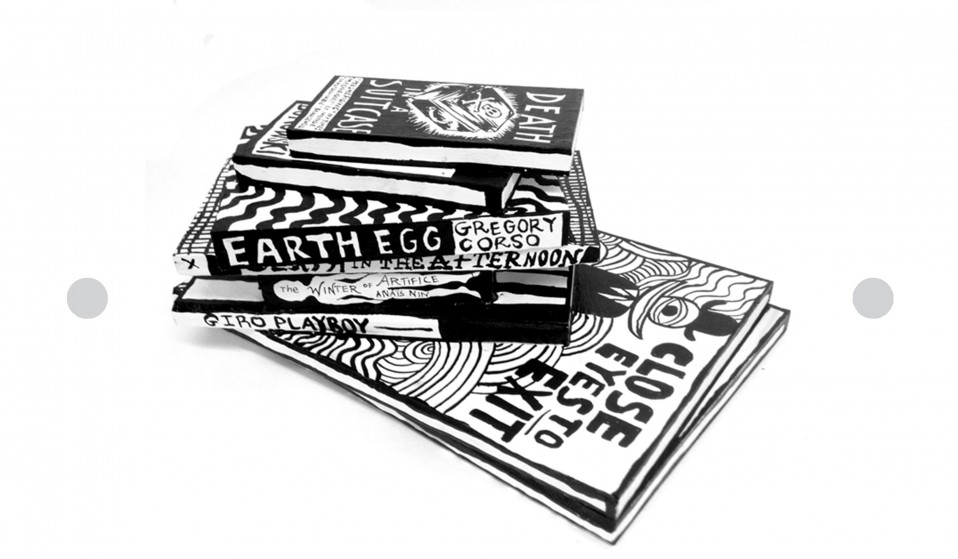 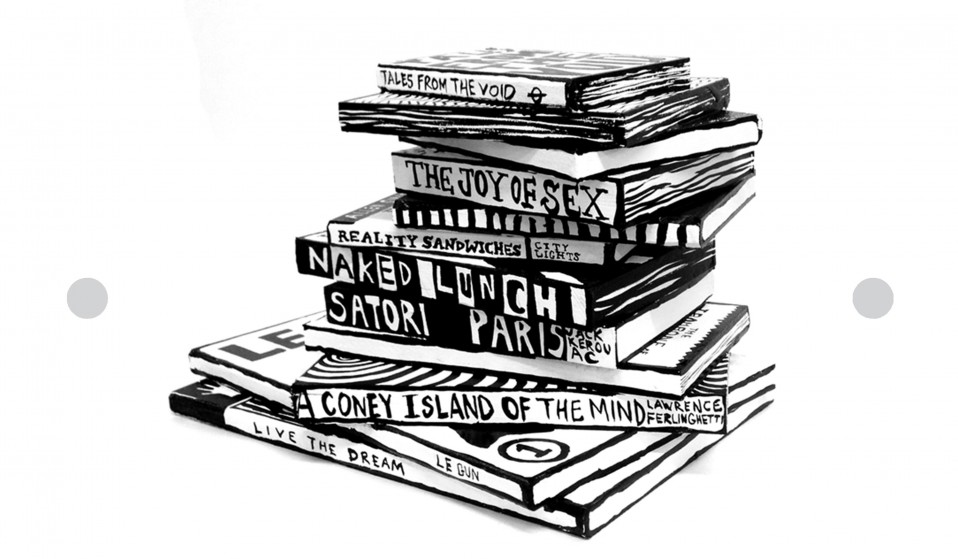 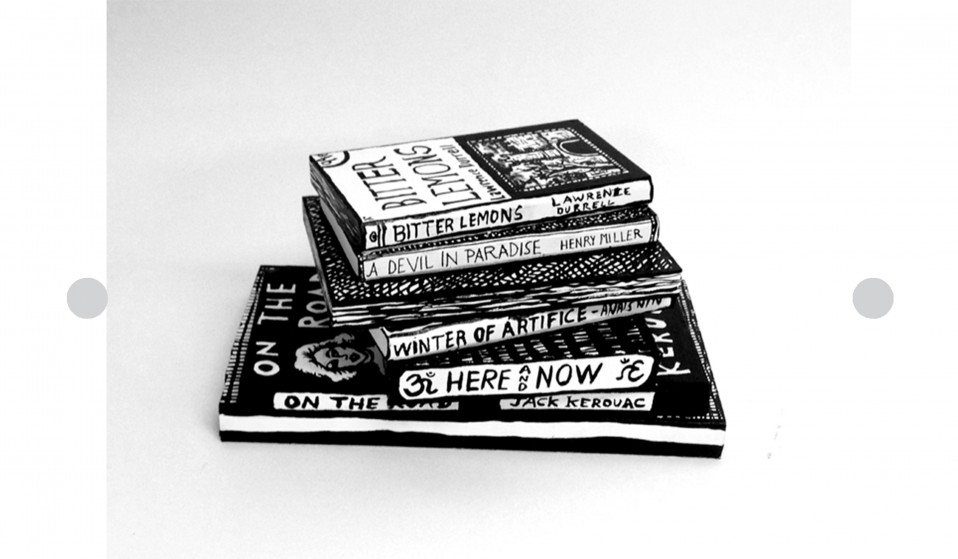 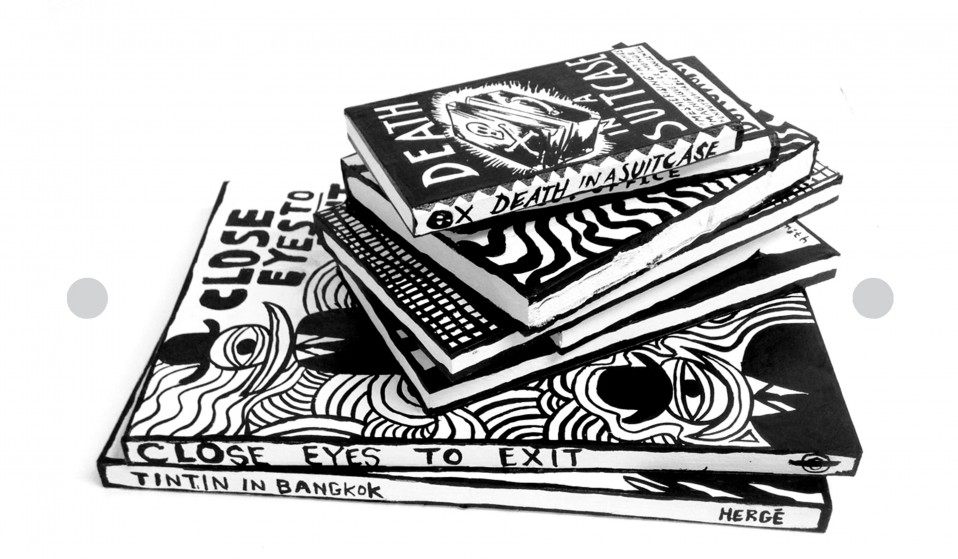 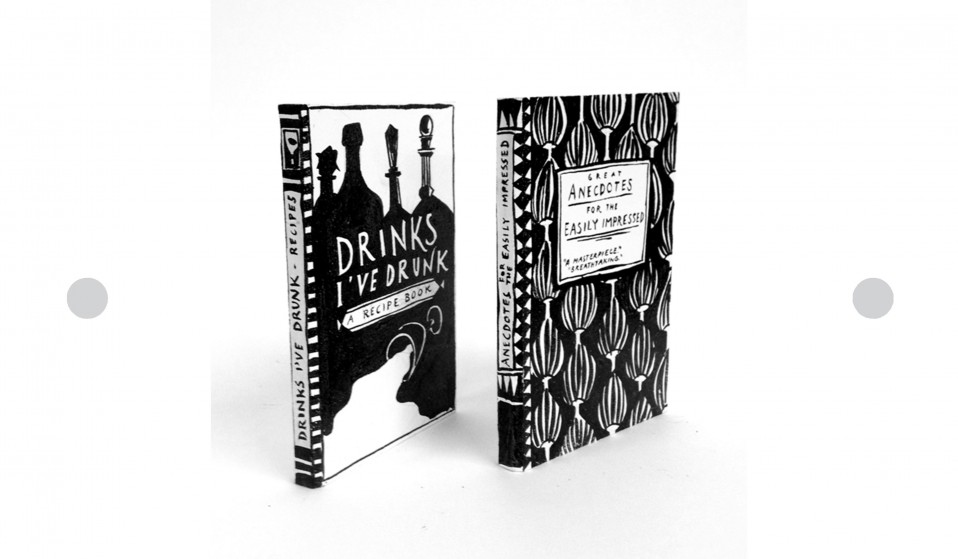 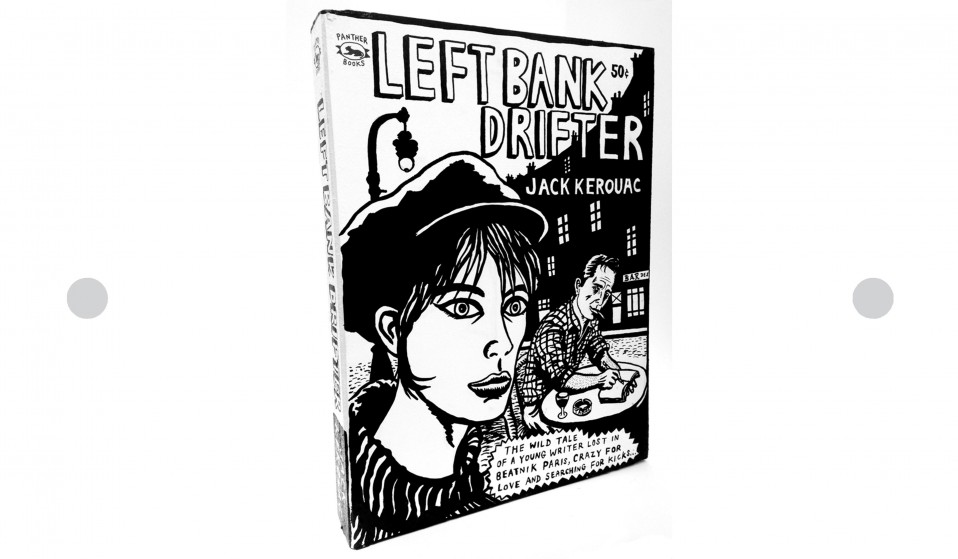 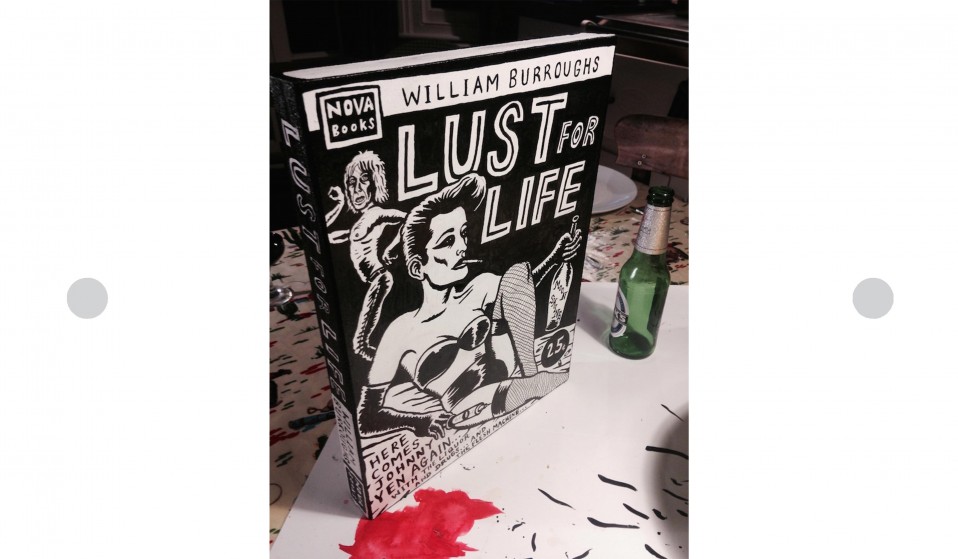 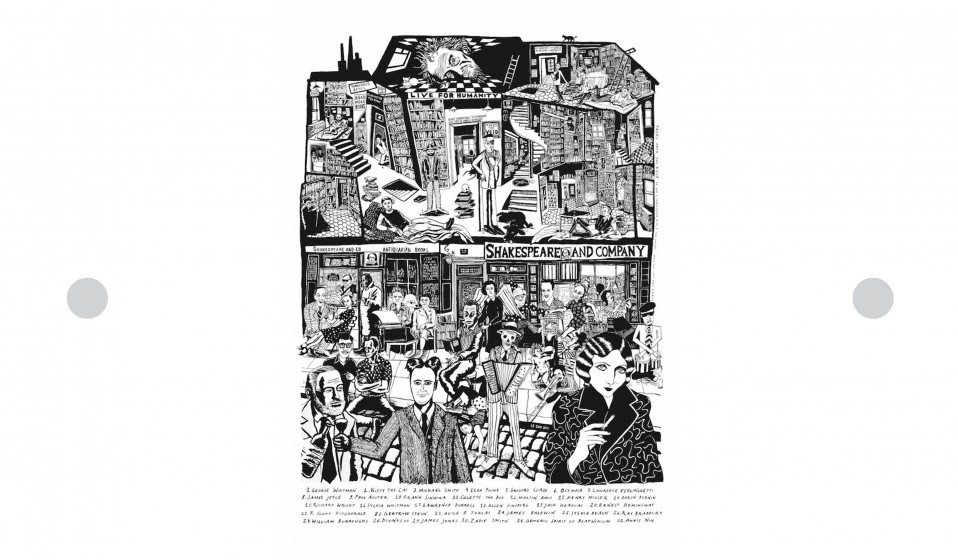 Le Gun produce a series of hand illustrated wooden books inspired by the history of Paris’ iconic Shakespeare and Company.

Le Gun produce a series of hand illustrated wooden books inspired by the history of Paris’ iconic Shakespeare and Company.

The Shakespeare and Company bookstore on Paris’ artsy Left Bank has been a buzzing centre of culture (and counter-culture) since opening its doors in 1951. “In ’58, Ginsberg gave a reading of Howl, along with Corso and a few other poets,” explains events director Laura Keeling. “Ginsberg and Corso didn’t approve of the first reading so, to demonstrate what ‘real poetry’ was, they stripped and performed totally naked!”

The english language bookstore’s anarchic spirit instilled by its founder George Whitman (nicknamed the “Don Quixote of the Latin Quarter”) lives on to this day. To coincide with Paris’ Drawing Now Festival, London-based punk art collective Le Gun have been invited to create illustrations and a series of hand painted wooden sculpted books inspired by the colourful characters who have passed through its doors, such as Anaïs Nin, Henry Miller, Julio Cortázar, Lawrence Durrell and James Baldwin.

“The shop has accrued so much history since it opened in the 50s,” Le Gun explain. “The beat generation influence is something we admire – particularly William Burroughs using the library to research Naked Lunch. The shop also lets writers sleep there and produce work which is a unique and fascinating thing.”

Shakespeare and Co.’s Tumbleweed programme was inspired by its founder’s “hobo adventure” through the US and Mexico during the Great Depression. Random acts of kindness he encountered along the way, such as falling seriously ill in the Yucatan and being nursed back to health by a Mayan tribe, led him to ink the motto written above the library entrance: “Be not inhospitable to strangers lest they be angels in disguise.” Past Tumbleweeds who have gone on to great things include, Alan Sillitoe, Kate Grenville, Ethan Hawke, Jeet Thayil, Darren Aronofsky and Linda Grant – all of whom have read the required book a day, helped out at the shop and written a one-page biography at the end of their stay.

The store is no prisoner to its history and is conscious of the need to break new ground, with its packed events calendar bringing together the brightest literary talents. “In terms of pushing forward, art and literature are pretty progressive by nature, so the culture of the shop rolls on on its own,” Laura explains. “The history will always compel people, but it’s not a museum… Any place so full of young people and ideas — it’s going to have an intense sense of life!”

In a similar vein, Le Gun’s ‘Tales of the Void’ takeover celebrates both the store’s past and present. “The characters represented are both living writers and dead writers sharing this space at the same time – reflecting the sense that this space is truly steeped in history,” Le Gun explain. “George Whitman’s head can be found in the attic, this alludes to the picture as manifestation of Whitman’s mind, and the drawing can be read as an exquisite corpse in composition. His spirit resonates in the shop.”

Find more about the Le Gun’s ‘Tales of the Void’ takeover at Shakespeare and Company, Paris, March 27-April.

Linkedin
RELATED ARTICLES
OTHER ARTICLES
A centuries-old tradition is offering families a way to honour the deceased, reports Arbab Ali.
The photographer reflects on a decade which saw the rise of MTV and the flourishing of new genres.
Whether it was seacoalers in Northumberland or the miners’ strike, the photographer was always fully immersed in the story he sought to capture.
After voting to strike across England, prison teachers explain why they’ve been pushed to a breaking point.
The hate Just Stop Oil faced after throwing soup over a Van Gough painting has been immense. Here, they explain why it won’t deter them.
The Egyptian government are continuing the repressive mistreatment of environmental campaigners.