Artist Waffaa Bilal’s new exhibition 168.01 looks at the dynamics of destruction and reconstruction, using Kickstarter engage his audience in rebuilding.

Artist Waffaa Bilal’s new exhibition 168.01 looks at the dynamics of destruction and reconstruction, using Kickstarter engage his audience in rebuilding.

In his upcoming exhibition at the Art Gallery of Windsor, Iraqi-born artist Wafaa Bilal draws connections between the destruction of the art library at the University of Baghdad in 2003 and the Bayt al-Hikma, or House of Wisdom – the world’s largest library until it was sacked during the 13th century siege of Baghdad.

Bilal’s project, titled 168.01, aims to investigate the recurring violence against cultural institutions through photography and installation work. But even before it’s opening at the end of this month, 168.01 has already gone way beyond what Bilal expected. 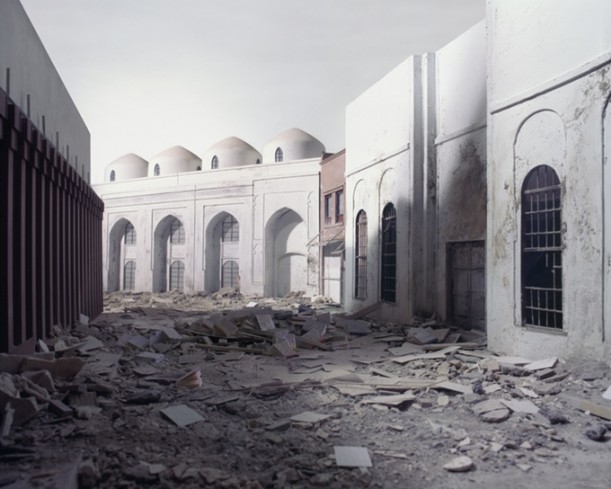 Bilal’s main installation piece for the show is a shelf of blank books, “a symbolic monument to the texts that were lost in 2003” Bilal says. The artist hopes the blank books will slowly replaced with actual art books through the public’s engagement: donations from a Kickstarter project that is accompanying the exhibition will go towards restoring the College of Fine Arts library at the University of Baghdad. “It seems like every wave of violence—past and present—involves the destruction of knowledge, and 168:01 is a symbolic act of rebuilding.” Bilal told Artslant.

Bilal, who grew up in Iraq and now works in New York, set the Kickstarter goal at $9000 (roughly £6300). With two weeks still to go before the deadline, the Kickstarter has already raised triple the goal and librarians have begun donating time to help index the donated books.

The Iraqi-American artist is best known for his incisive interactive video installation piece Domestic Tension, in which he lived in a Chicago art gallery for a month and gave online users 24-hour access to his life: shooting at him with a remote-controlled paintball gun installed in the room.

The invasion of Iraq was carried out in 2003 by forces from the U.S., Australia, Poland, and the United Kingdom. During the invasion, the College of Fine Arts library was looted and burned, resulting in the destruction of 70,000 books. For Bilal the destruction had echoes of the razing of the House of Wisdom (which is considered to be one of the centres of the Islamic Golden Age) by the Monguls in the 13th century.  “It’s a story I grew up with,” Bilal says. “According to legend, the Mongol army threw the library into the Tigris River to create a bridge of books for them to cross. The pages bled ink into the river for seven days, after which the books were drained of knowledge.”

Seven days can be calculated as 168 hours – thus the title, 168.01 – the second after the destruction. Another key work in the exhibition is Bilal’s ‘Ashes Series‘. It recreates scenes of destruction as miniature models, which are then photographed and blown-up. “The ‘Ashes Series’ represents my attempt to make sense of destruction and to preserve the moment of serenity after the dust has settled: to give the ephemeral moment extended life in a mix of beauty and violence” Bilal says.

168.01 holds up the optimism of rebirth against the bleakness of repetition. The destruction of a library represents a break in history: knowledge that isn’t passed on from one generation to the other. Bilal’s hybrid installation piece provides an opportunity to rethink the rebuilding process as something collective.

Linkedin
RELATED ARTICLES
OTHER ARTICLES
Brett Amory recreates poignant city locations through painting and installation. As he publishes his complete works, we asked the Bay Area artist how his process is evolving.
Danish photographer Mads Nissen has won the World Press Photo of the Year with an intimate portrait of a young gay Russian couple.
Art and photography that looks back on moments of conflict to consider the ongoing effects on people and places in the shadows of these traumatic events.
As the media sets its sights on Tunisia once again for the country’s first democratic presidential election, Lindsay’s Mackenzie’s Instagram project reveals snapshots of the everyday lives sidelined by the explosive coverage of the region.
A wry take on life in Beirut into hard-edged comics and bomb-fuelled jazz.