Art & Culture / Art / What comic books can teach us about war, guilt and trauma 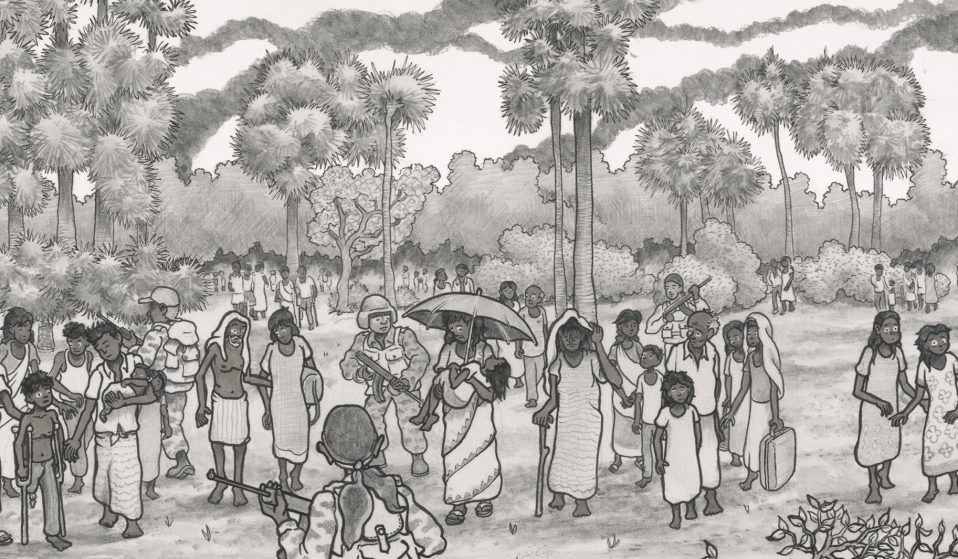 “I could’ve easily become a crack addict to get away from the pain,” says Dr Benjamin Dix. Instead, he found comic books.

From 2004 to 2008, Dix was part of the United Nations team based in the Vanni region of Sri Lanka, one of the focal points of the country’s decades-long civil war. The region, at the time controlled by the militant group Liberation Tigers of Tamil Eelam (better known as the Tamil Tigers), was pummelled by government bombs during the final flames of the conflict. The UN would later say it had evidence “strongly indicating” that government forces committed war crimes: tens of thousands of Tamil civilians were indiscriminately blown up on the beaches of Northern Sri Lanka in the Army’s final push. Writing last year, Dix recalled finding “sandals, clothing and other detritus” strewn in the sand during an emotional 2017 return.

The UN’s international staff evacuated in 2008 – a year before the war ended – when the Sri Lankan government warned it could no longer guarantee their safety. Dix was forced to part with his Tamil friends and colleagues, and as his convoy rolled out, he heard the bombs falling behind him. “I was 32, so I still had that naivety that I’d been working for an organisation that would actually help in these situations, instead of just running,” he tells me.

Back in London, Dix was racked with guilt, and battled with PTSD. He recalls one afternoon when, near Tower Bridge, he thought he heard a fighter jet engine, and dived into a nearby shop doorway. “It was just a woman going past with a rolly suitcase on the concrete,” he says. 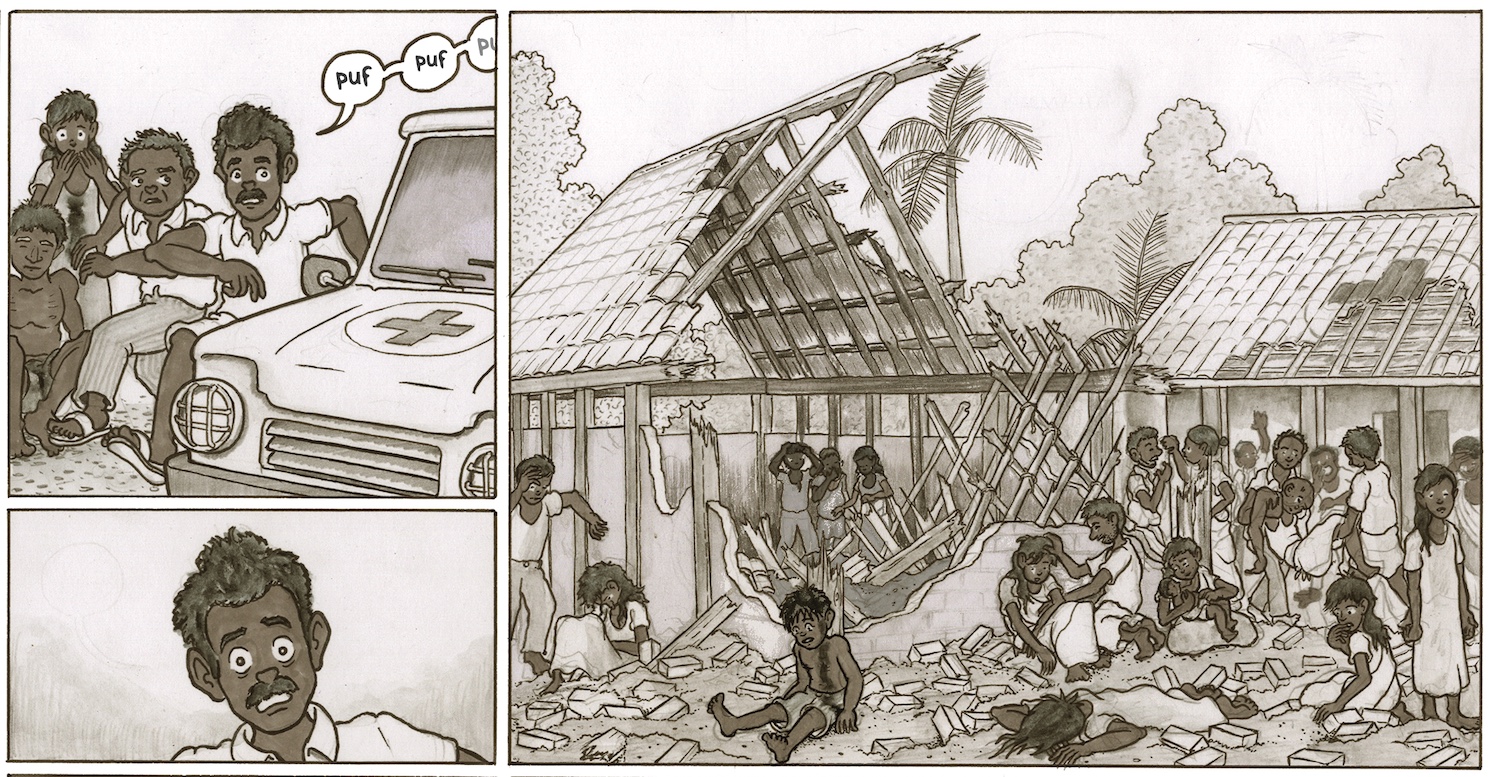 “I was back here in London, but my soul was still in Sri Lanka. My friends were dead, or dying, or in trouble, or stuck on a boat heading to Australia, or in a prison in Qatar, and it was terrible. And that manifested itself into all kinds of anxiety, and no sleep.”

To stop himself spiralling, Dix set about telling the stories of those left behind. He teamed up with illustrator Lindsay Pollock and began creating what would become Vanni: a beautiful, haunting graphic novel told from multiple, semi-fictional Tamil viewpoints during the conflict (the names and families are made up, but the experiences real). The book was finally published late last year after a decade of work within the literary agency PositiveNegatives, which Dix set up after returning from Sri Lanka. To date, the organisation has created 57 animations and comics about persecution, exploitation and crises across the globe. Vanni started it all.

The early research was “cathartic”, Dix says. He and Pollock visited Tamil families in Zurich, London and India. In Tamil Nadu, they met an old friend of Dix’s who had fled Sri Lanka. “When you’re suffering from something like this, sitting in front of an old colleague who’s been tortured, there’s almost a comfort in re-traumatising yourself,”  he says.

One of the main challenges Dix and Pollock faced with Vanni was deciding how to portray the scale of the violence and brutality the ethnic minority Tamil civilians faced. They wanted to reach a broad audience without “sanitising” the reality of the conflict, Pollock says. Thankfully, his drawing style, which he likens to that of a children’s book illustrator, provided a natural “aesthetic buffer” to the horror. 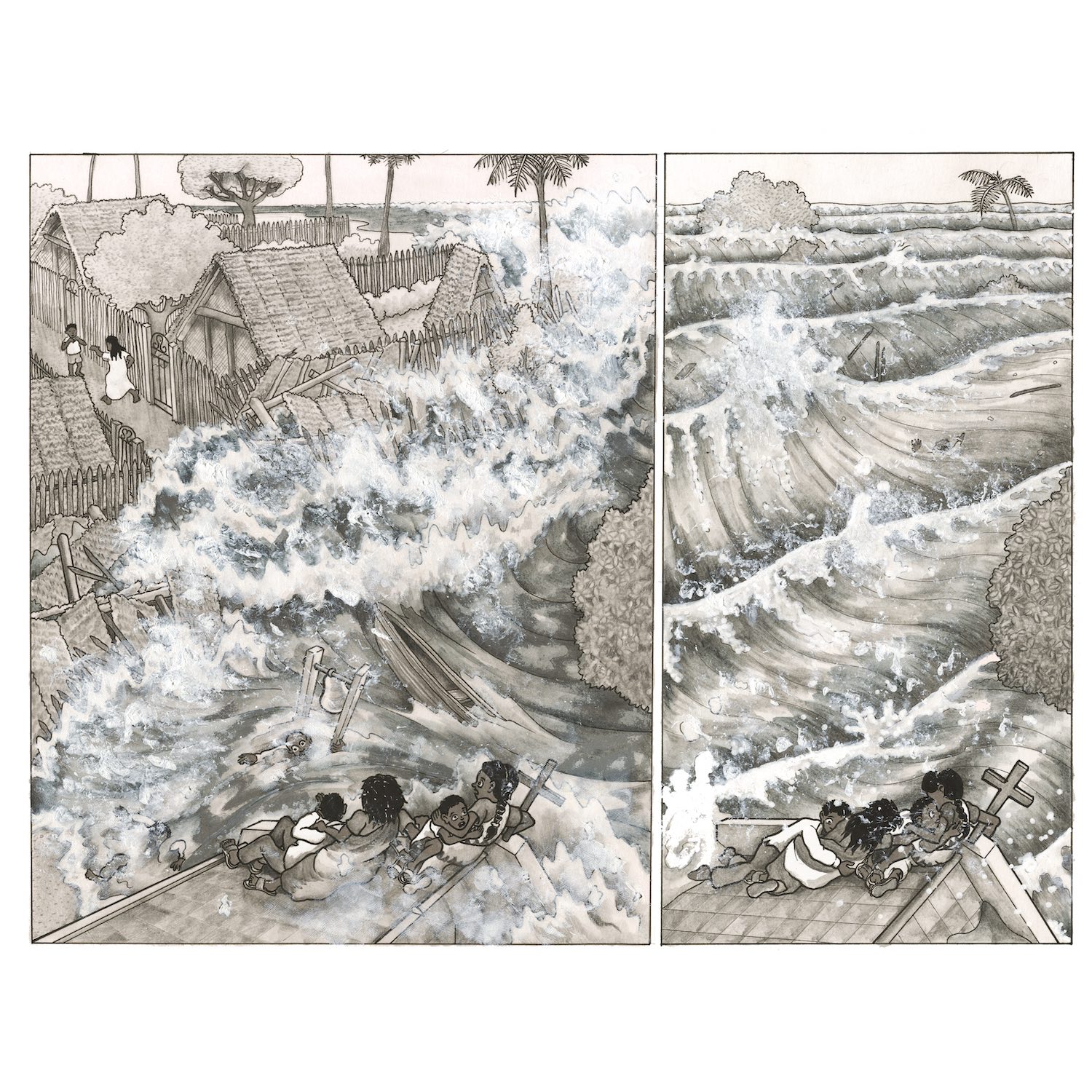 “That’s the only way I know how to draw,” he says. “We both ended up feeling that was actually a benefit, because we could do both: we could show carnage, and the way characters were reacting to that… but if I drew the way the guy that draws The Walking Dead drew, it would feel gratuitous, revelling in it. It would be really invasive into the private, true suffering of the people that went through it.”

The results are still uncomfortable. In one scene, Pollock depicts an old man’s memory of bodies ripped apart by an explosion, his eyes wide and hollowed out by suffering. In another, the book’s main character Antoni – named after a Tamil friend Dix met in Sri Lanka – is bundled into a boxy, windowless room with a cloth hood over his head, his interrogator stubbing out cigarettes on his chest. The contrast between Pollock’s playful style and the cruelty is chilling.

The most difficult scene for Pollock was one in which two women, Kavi and Priya, are dragged to a clearing in the trees by a group of government soldiers. Priya is raped, shot and left to bleed out while Kavi watches on. “I kept on putting off trying to figure out how to do it,” says Pollock. “I tried to break it down into an almost abstract series of little details, and frame it around the face of the girl witnessing it going on. There’s nothing absolutely explicit in it, but as a reader there’s enough there that you fill in the gaps.” 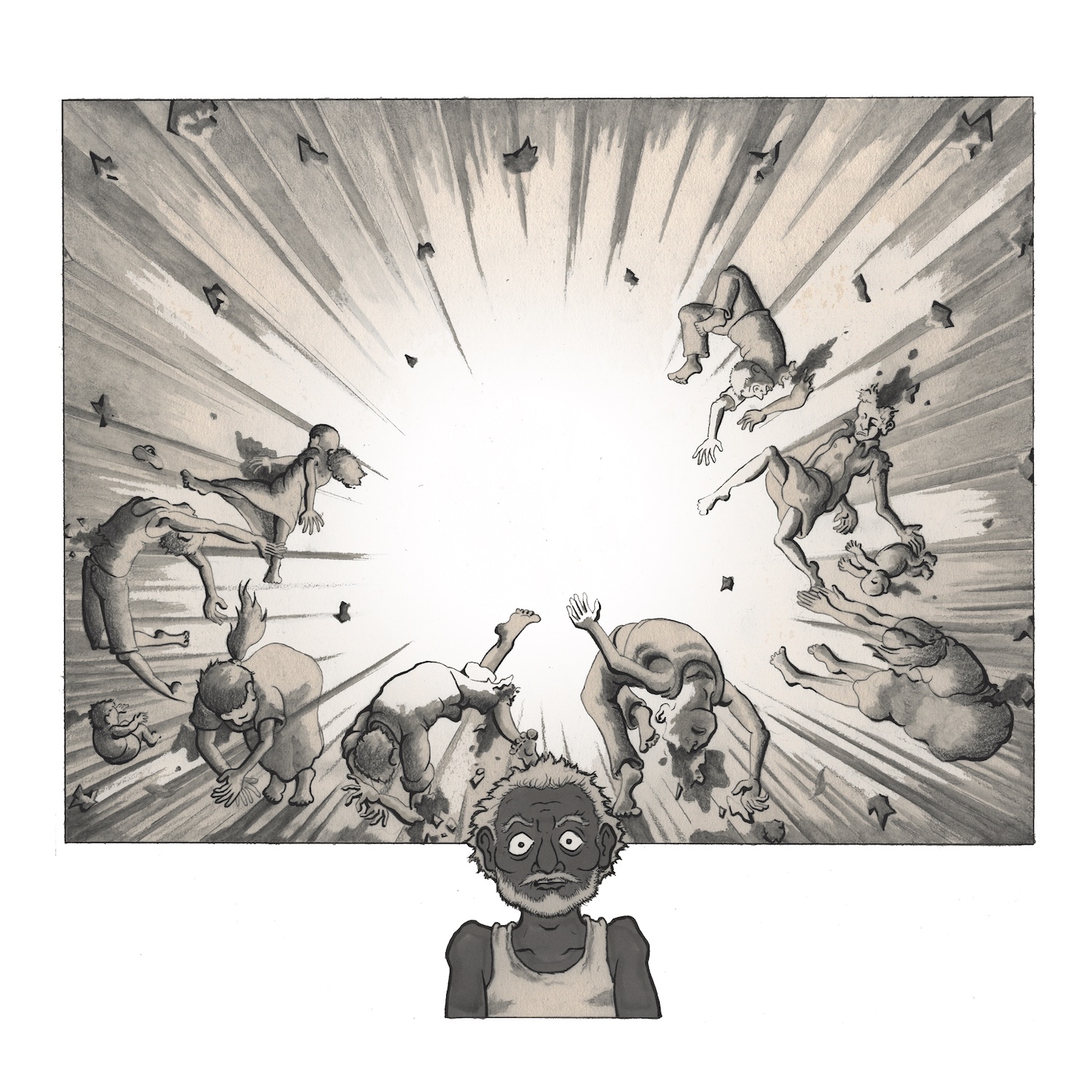 It’s in leaving that room for readers’ imaginations, in the “spaces between the panels”, that graphic novels derive their power, Dix says. He’d never worked on comic books before Vanni, but he now sees them as an unparalleled medium for giving a voice to disenfranchised groups. Dix’s subjects don’t have to talk into a microphone or dictaphone, or look down the lens of a camera. “We can just sit, and the sun can go down, the light can fail, the dogs can bark, and we get through it.”

Dix and Pollock set out to bring the horrors of the war to a broad audience. They now take Vanni into schools, and PositiveNegatives’ graphic novels have been used in Geography, PHSE and Maths lessons. Kids, as you might expect, prefer reading comics as their homework than completing exercises from a textbook.

“The kids really get it,” Dix says. “They do a workshop with us, and then the next day they come back in and they have questions about Antoni, rather than about a statistic.” He pauses. “This is someone’s brother. They can empathise with that.”

Using comics, Dix can tell stories that reach out and grip audiences, including schoolchildren, without exposing victims to further, painful scrutiny. It’s “anonymisation, without removing the human”, he says. And in Vanni, the anonymised stories of Sri Lankan Tamils feel very human indeed. 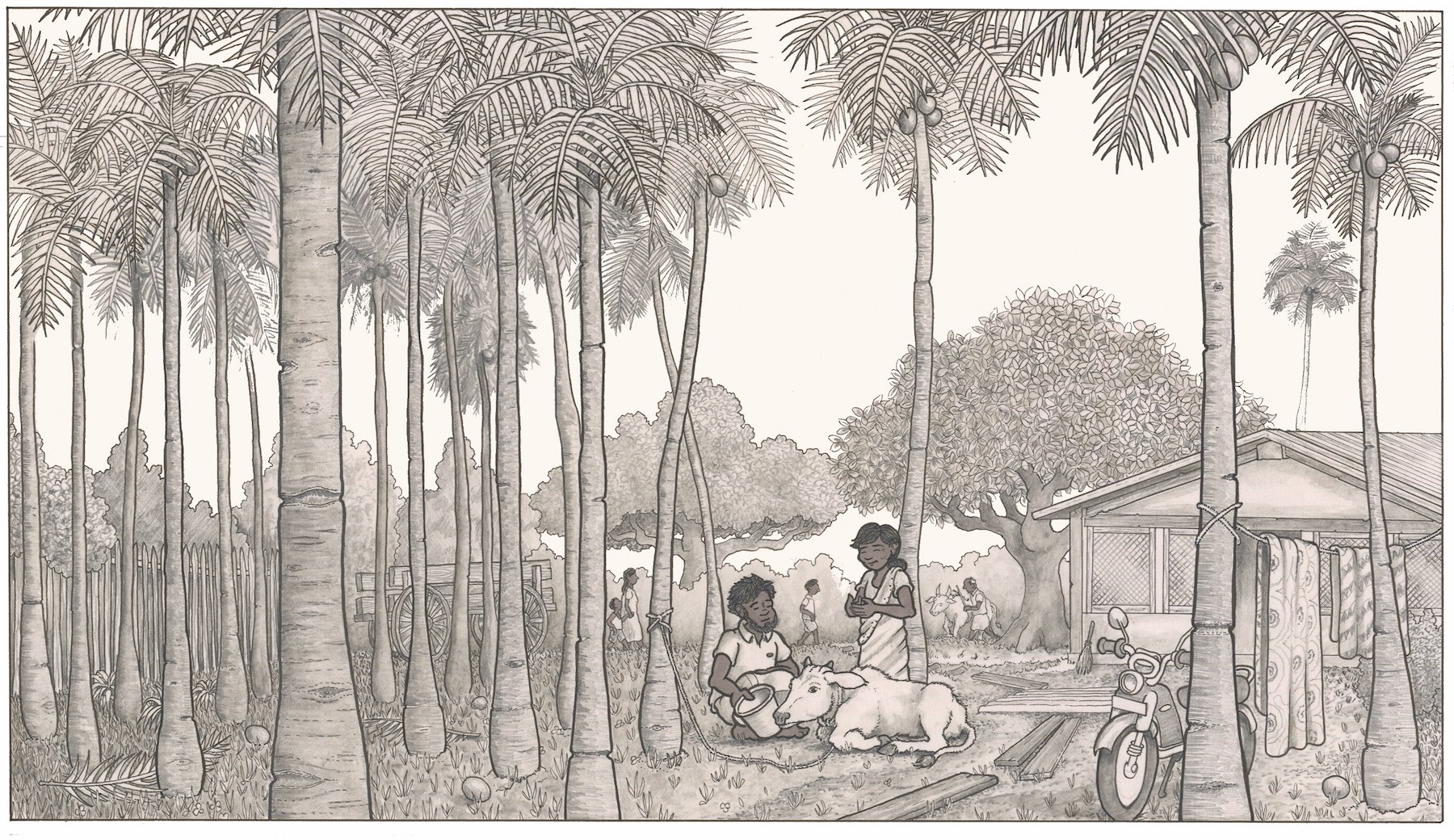 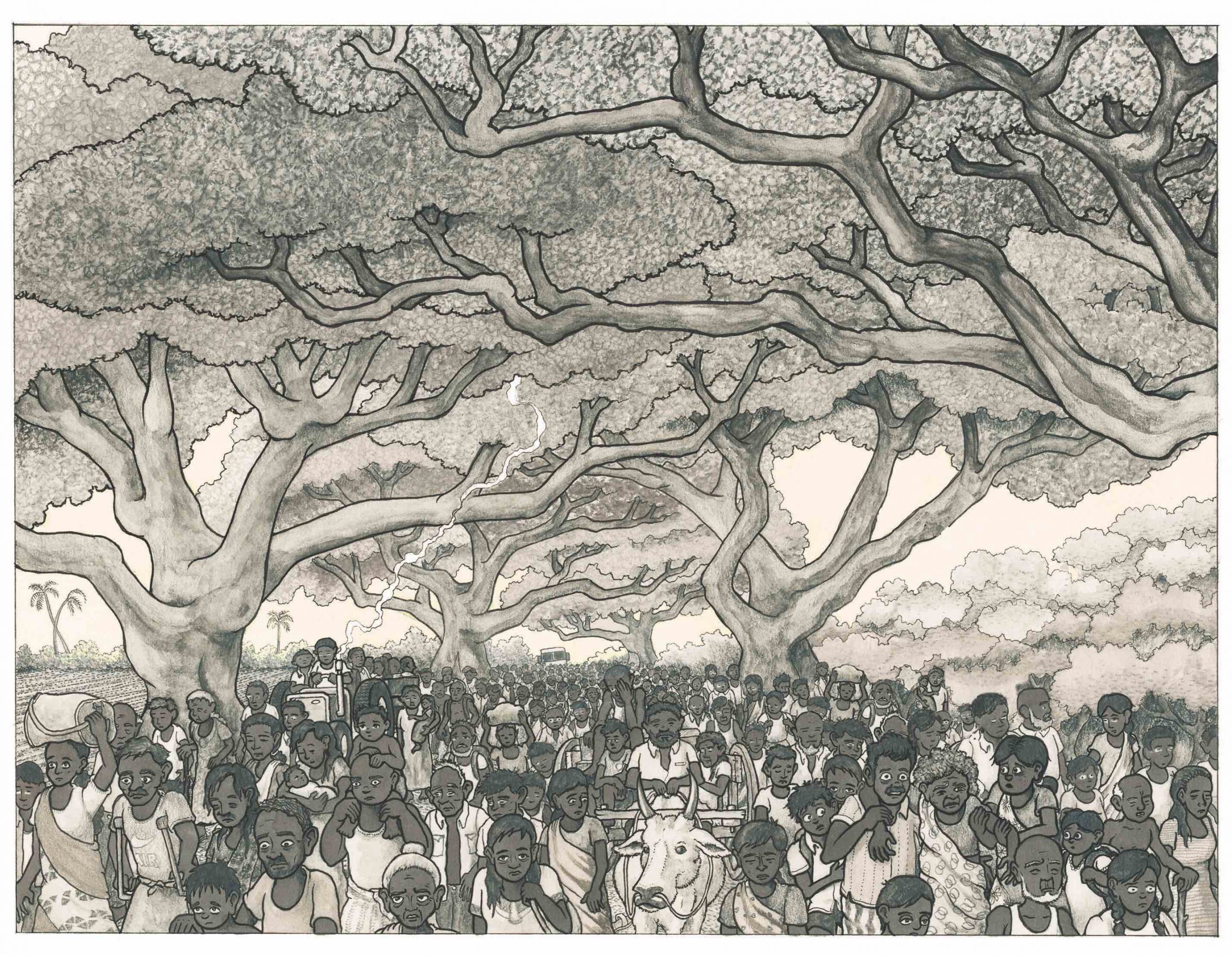 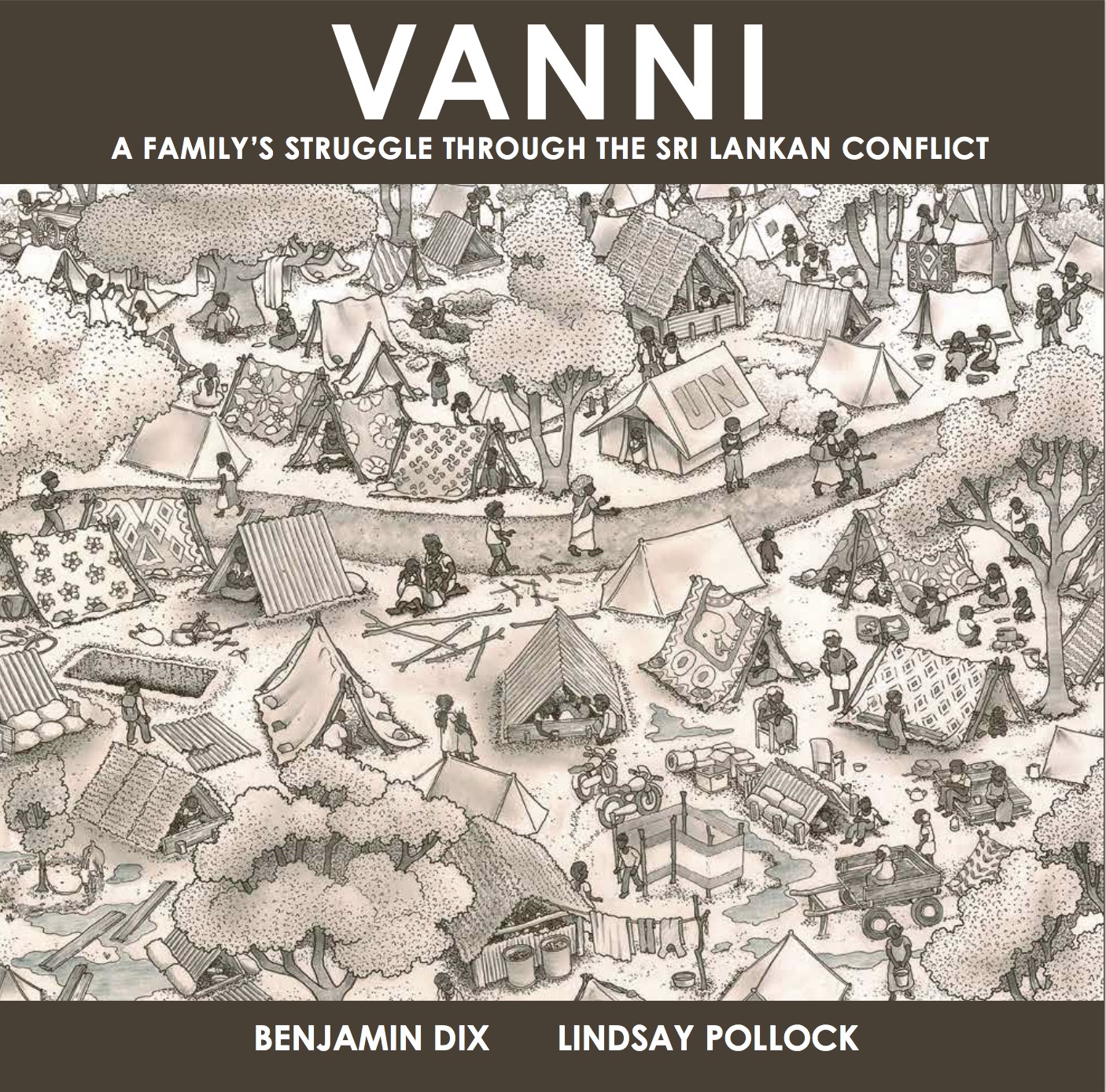 Vanni. A Family’s Struggle through the Sri Lankan Conflict is out now.

Linkedin
RELATED ARTICLES
OTHER ARTICLES
Whether it's partygate, the climate crisis or the spiralling cost of living, the fightback begins on the picket lines writes Tommy Vickerstaff
Wealth inequality and the rising cost of socialising is placing a strain on people’s relationships, reports Eve Upton-Clark.
Photographer Arthur Grace recalls travelling through the Soviet Bloc and finding ways to evade the surveillance of his work.
Thomas Hoepker‘s images taken during a road trip across America provide a searing social commentary about a divided country.
In her new book, the author explores the country’s housing crisis in human terms and calls for radical action to address a broken system.
Proposals to introduce a minimum GCSE threshold for student loans will disproportionately affect those from marginalised backgrounds.