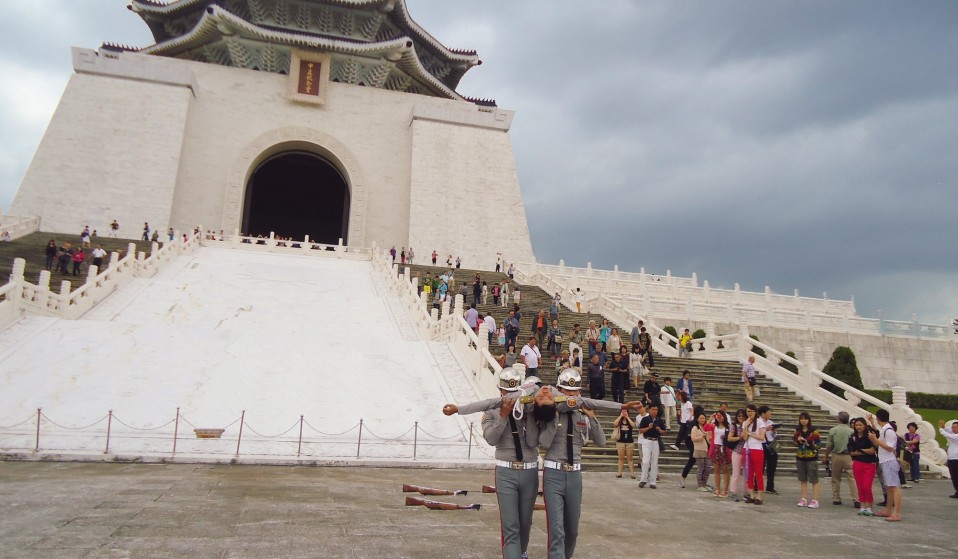 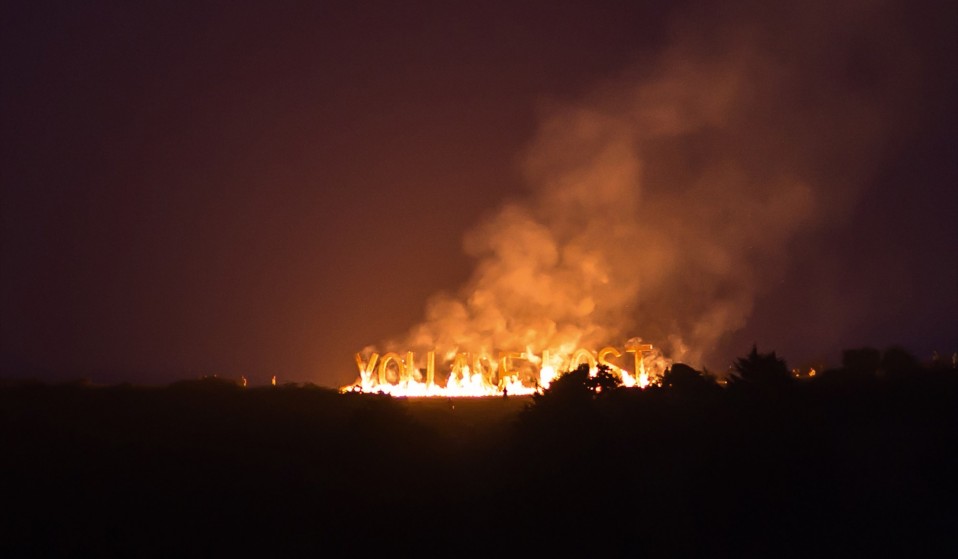 i
Heather and Ivan Morison, You Are Lost (2014), commissioned by the Kinsale Arts Festival in the historic port and fishing town of Kinsale, Ireland 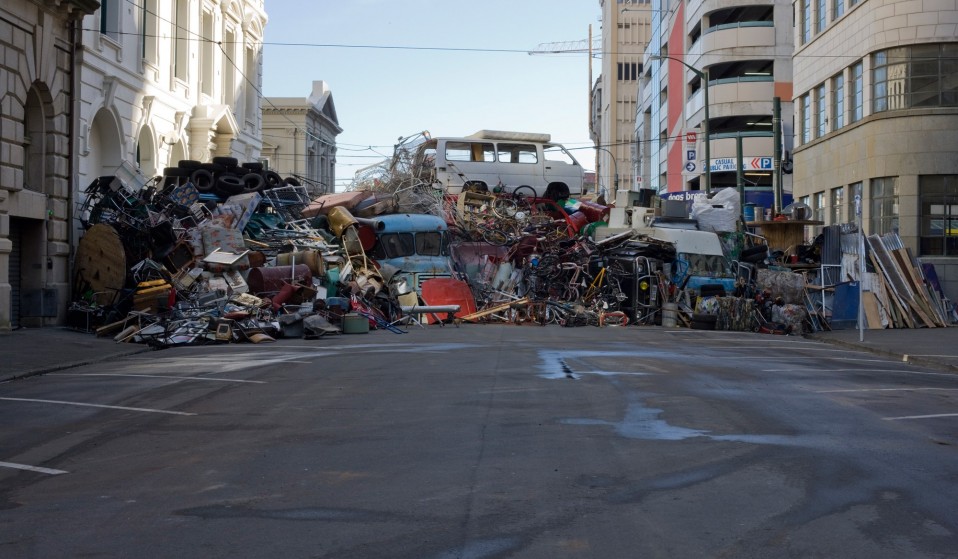 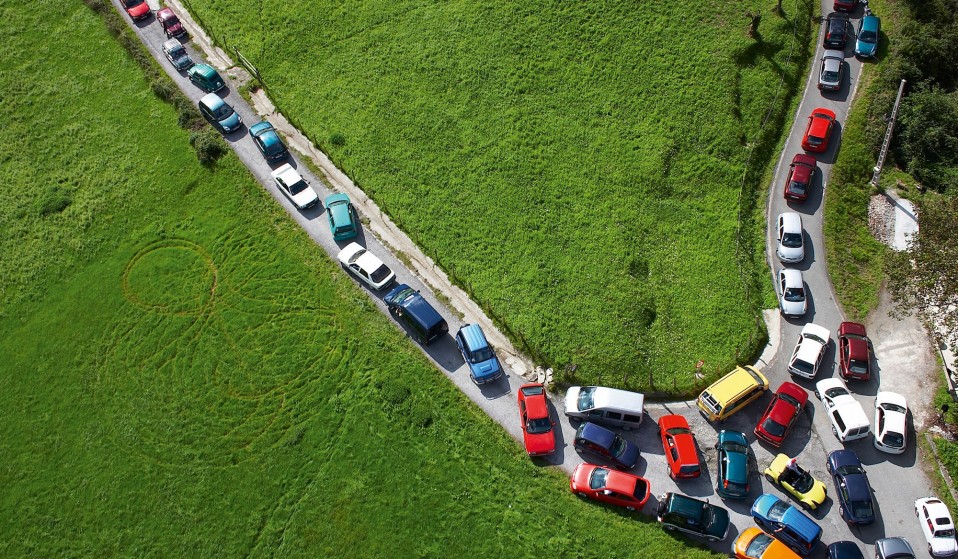 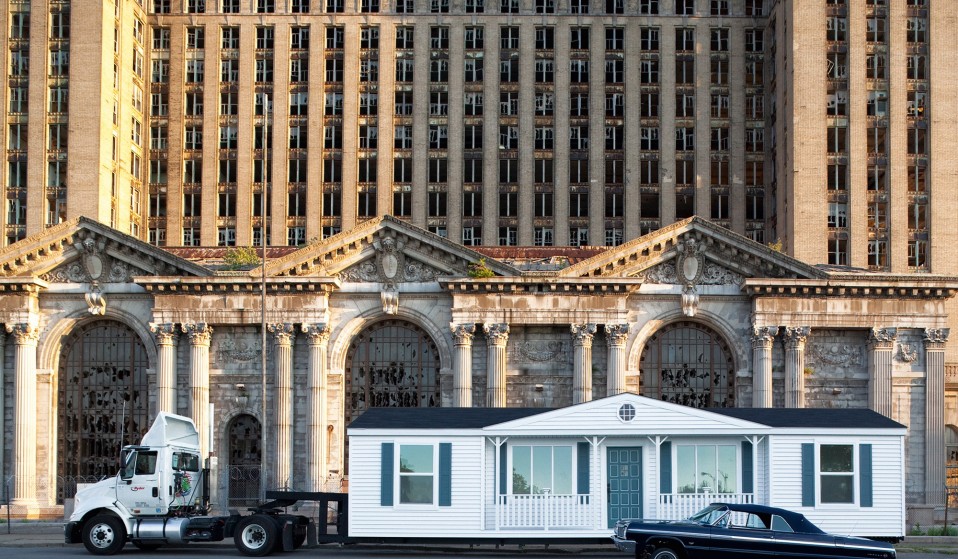 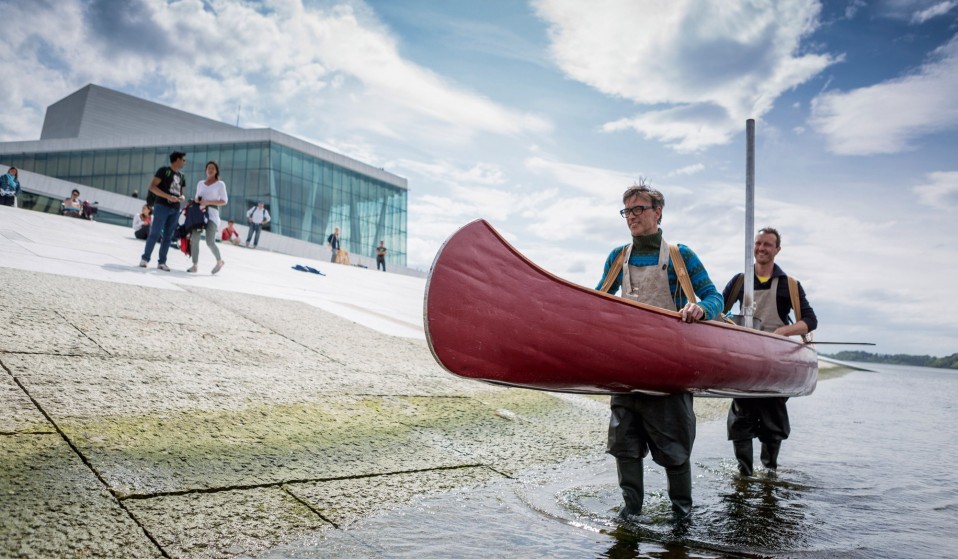 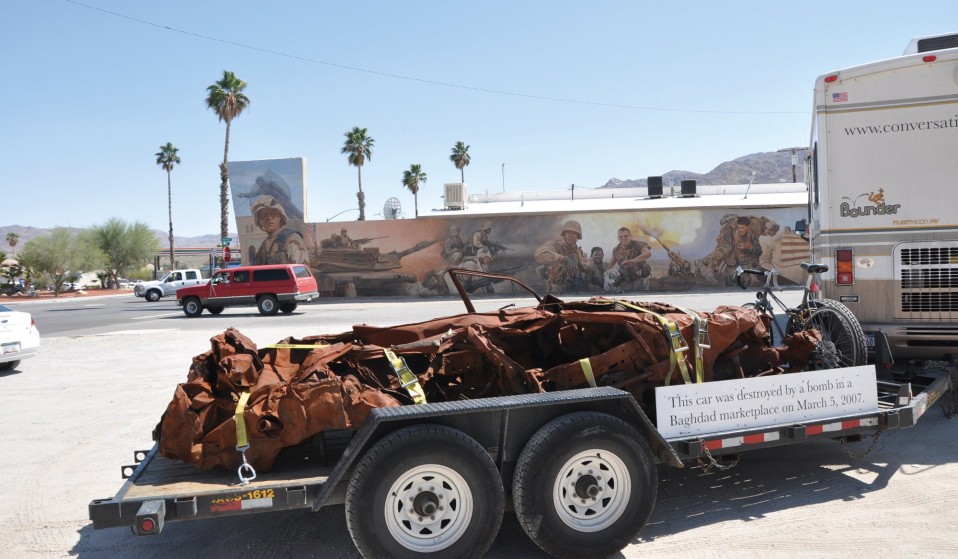 i
Jeremy Deller, It Is What It Is: Conversations About Iraq, multiple locations, United States (2009) 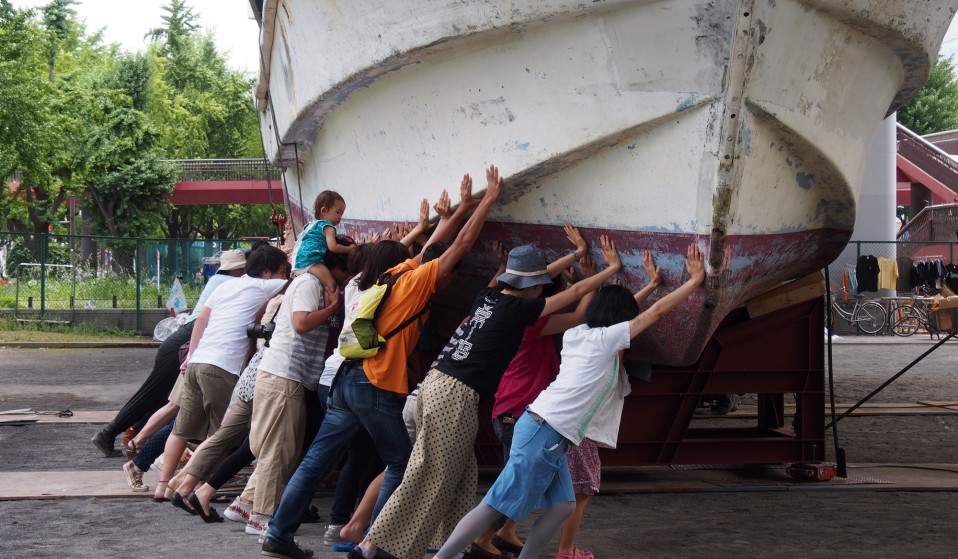 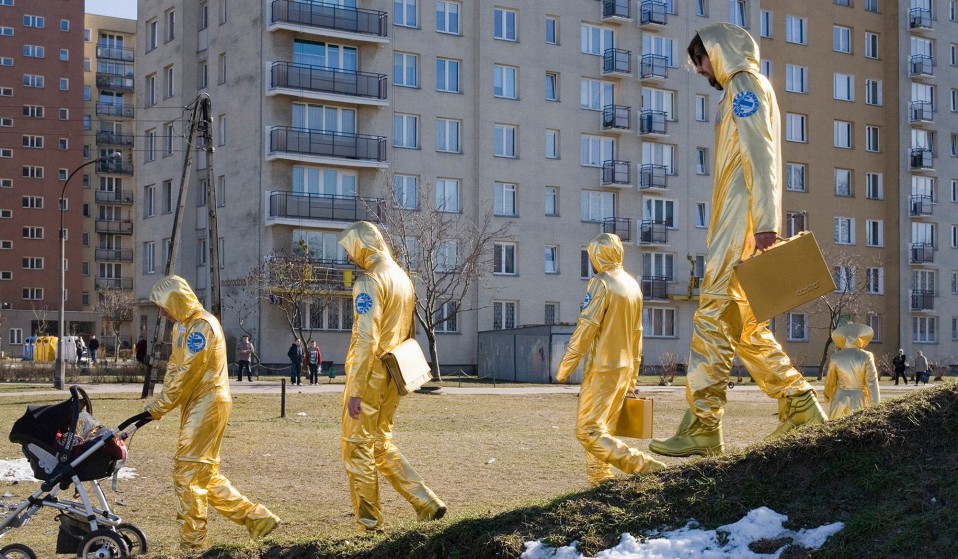 Great public art challenges authority and forces us to rethink our relationship with the world around us, says Claire Doherty, author of Public Art (Now).

Great public art challenges authority and forces us to rethink our relationship with the world around us, says Claire Doherty, author of Public Art (Now).

But look past the dull and uninspiring committee-approved pieces and you’ll find artists who genuinely capture the popular imagination to make you see space around you in a new light or rethink your relationship with the world around you – often while challenging and critiquing the status quo or powers that be.

Think Jeremy Deller towing the wreckage of a Baghdad car bomb around towns and cities in the US on a trailer to stimulate debate on the Iraq war, Alfredo Jaar burning down the cultural centre he’d just built in Skoghall, Sweden to get people talking about how desperately the town needed arts space, or Deborah Kelly’s mass Tank Man re-enactment in cities around the world – complete with shopping bags – to honour the unknown hero who stood up to the army during their crackdown on the Tiananmen Square protests and resist the Chinese government’s attempts to wipe the event from historical memory. 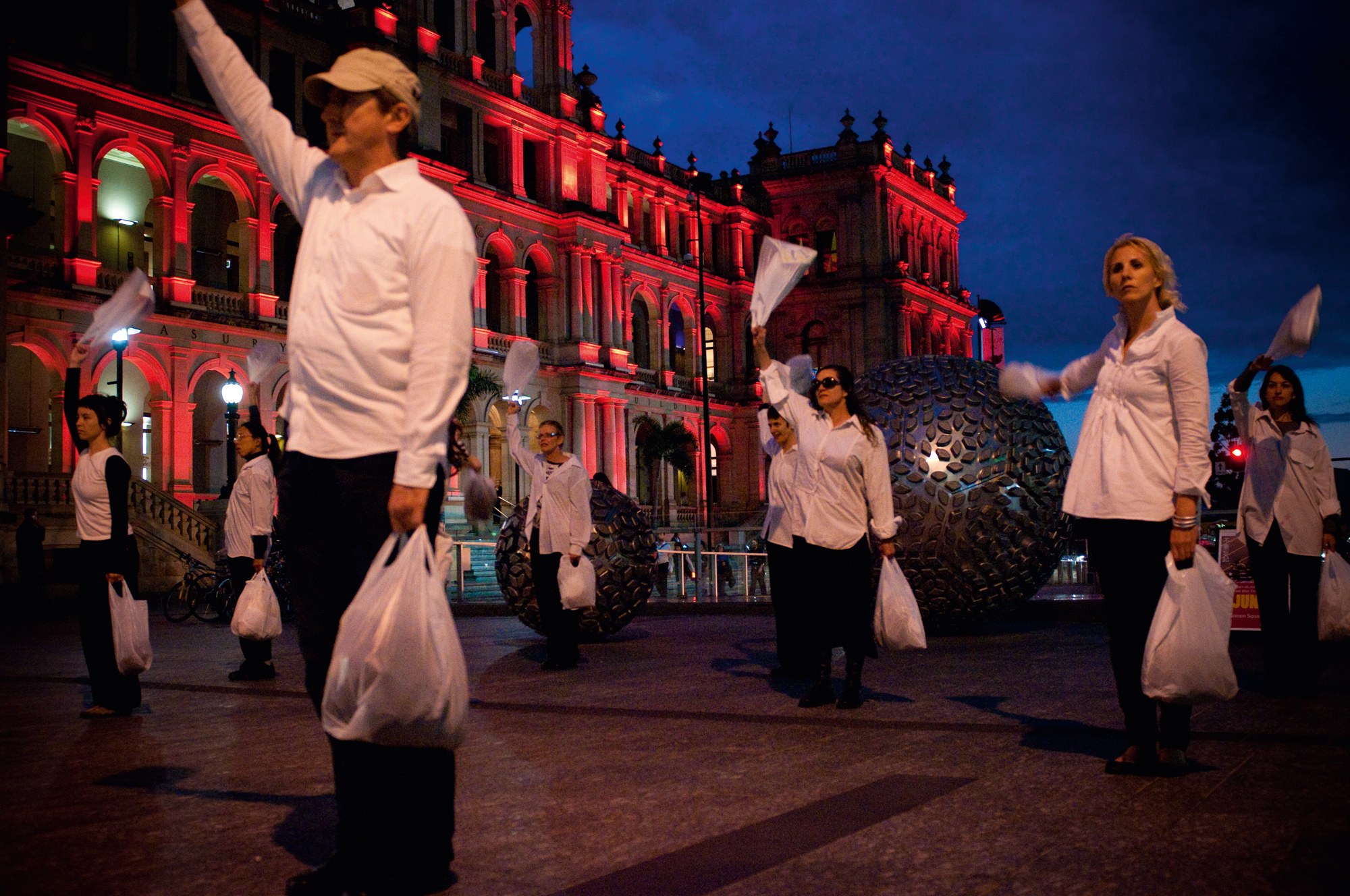 Public art can be so much more than just a way of filling space or trying to put your crappy town on the map. Author Claire Doherty surveyed a decade of public art projects and distilled the best down into her book Public Art (Now). She found artists who went beyond tick-box ‘public engagement’ to stage meaningful and provocative interventions in communities to heal wounds, highlight the lack of something they didn’t even know they were missing or finally get them talking about the elephant in the room.

But can public art survive in an era of government cuts and the privatisation of public space? We spoke to Claire to about roundabout baubles and the future of public art.

What makes great public art?
Brian Eno once said, “Sometimes the strongest single importance of a work of art is the celebration of some kind of temporary community.” Over the past decade we’ve seen artists and producers reject the idea of targeting a community or parachuting art like an uninvited guest into public space. But whilst there’s a greater sensitivity to building a community around an artwork, great public art is rarely born out of consensus just as a true ‘community’ is rarely born out of geography. So when 23,000 people across 135 countries join as citizens of a newly formed nation and start writing the constitution (Alex Hartley’s Nowhereisland) or farmers, activists and bakers gather to start building a public bakehouse on the banks of the fjord in the city of Oslo (Futurefarmers’ Flatbread Society), you know that you are witnessing something of cultural value.

In terms of seeking ‘great’ art, I look for a work that sets the imaginative charge to spark a change in the way I perceive or act in the world. It might provoke or beguile me, often by heightening my senses. It alters my perception of or assumptions about a place, provokes conversation and usually establishes a connection with others and stays with me long after the initial encounter. It’s rarely a statement of intent or a history lesson, but works to shift the ground beneath my feet.

Could you talk about a couple of your favourite projects from the book?
Time is increasingly a crucial material for artists working the public realm, so it’s intriguing to trace how Jonas Dahlberg, Michael Sailstorfer and Katie Paterson (Future Library in Huck 49) tackle the past, present and future.

Public art has historically been associated with the memorial or monument to past events, serving as a site at which collective remembering takes place. In a decade that has witnessed a marked rise in ritual acts of public memorial, it’s intriguing to see Jonas Dahlberg’s proposal ‘Memory Wound’ – a memorial to the victims of the Norwegian terrorist attack of 22 July 2011. Dahlberg proposes to make a cut directly through the landscape, which acts as both a barrier to viewing the island of Utøya, site of the attack, and connects this place with the site of the bomb in Oslo by displacing the excavated material from the cut to the city site. 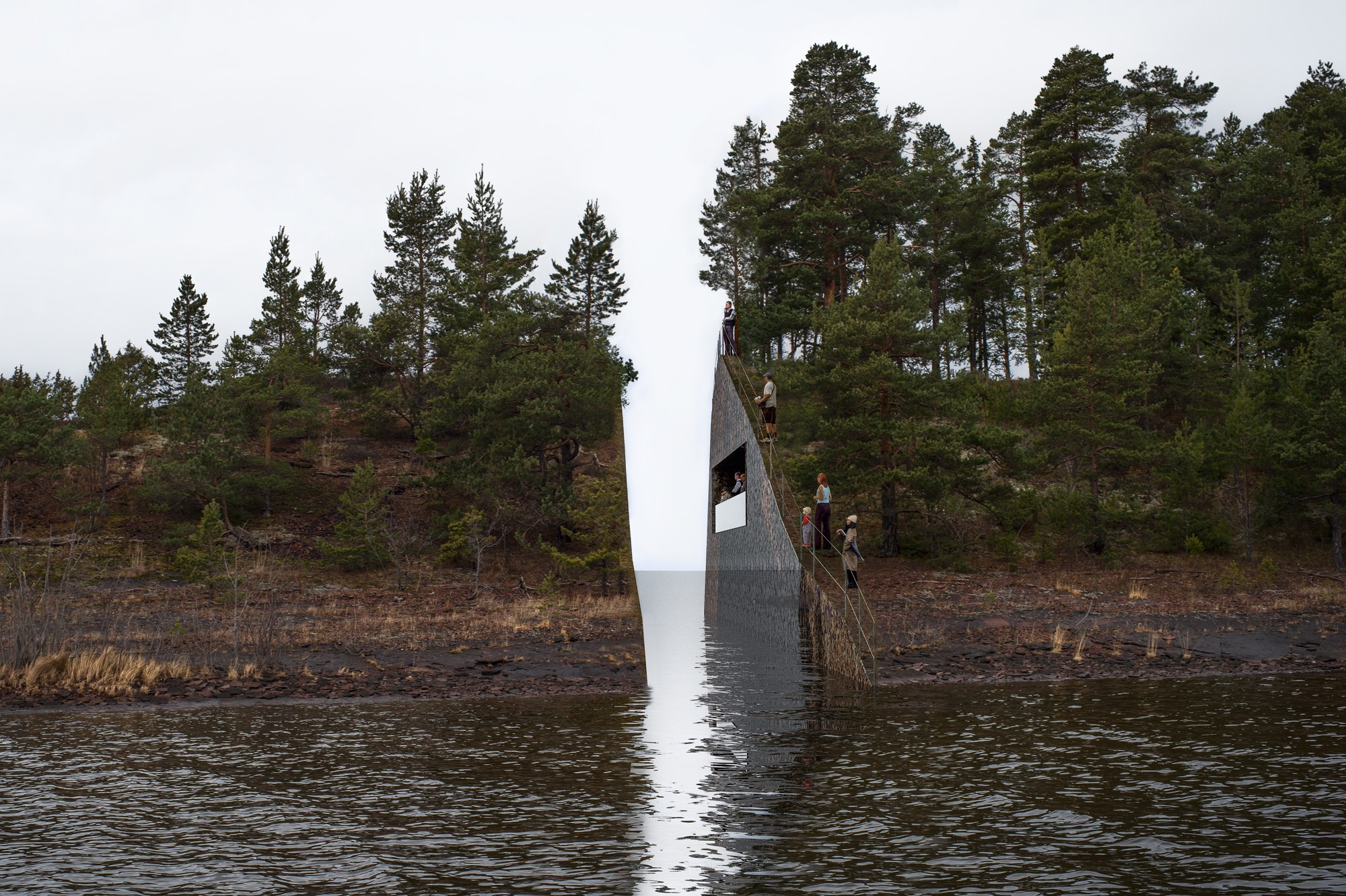 Jonas Dahlberg, a visualization of the proposal for the memorial to honour the victims of the Oslo terror act of 22 July 2011
Paweł Althamer, Common Task, multiple locations, worldwide (2008 –12)

A work that cannily acts as a call to urgent action in the present is Michael Sailstorfer’s ‘Folkestone Digs’ in which he announced one August morning in 2014 that he had buried 30 pieces of gold under the sand of the town’s harbour beach. The artist used media as a distribution mechanism creating a story about the town, which created a modern-day gold rush, but which also continues to resonate as an urban myth in the town. 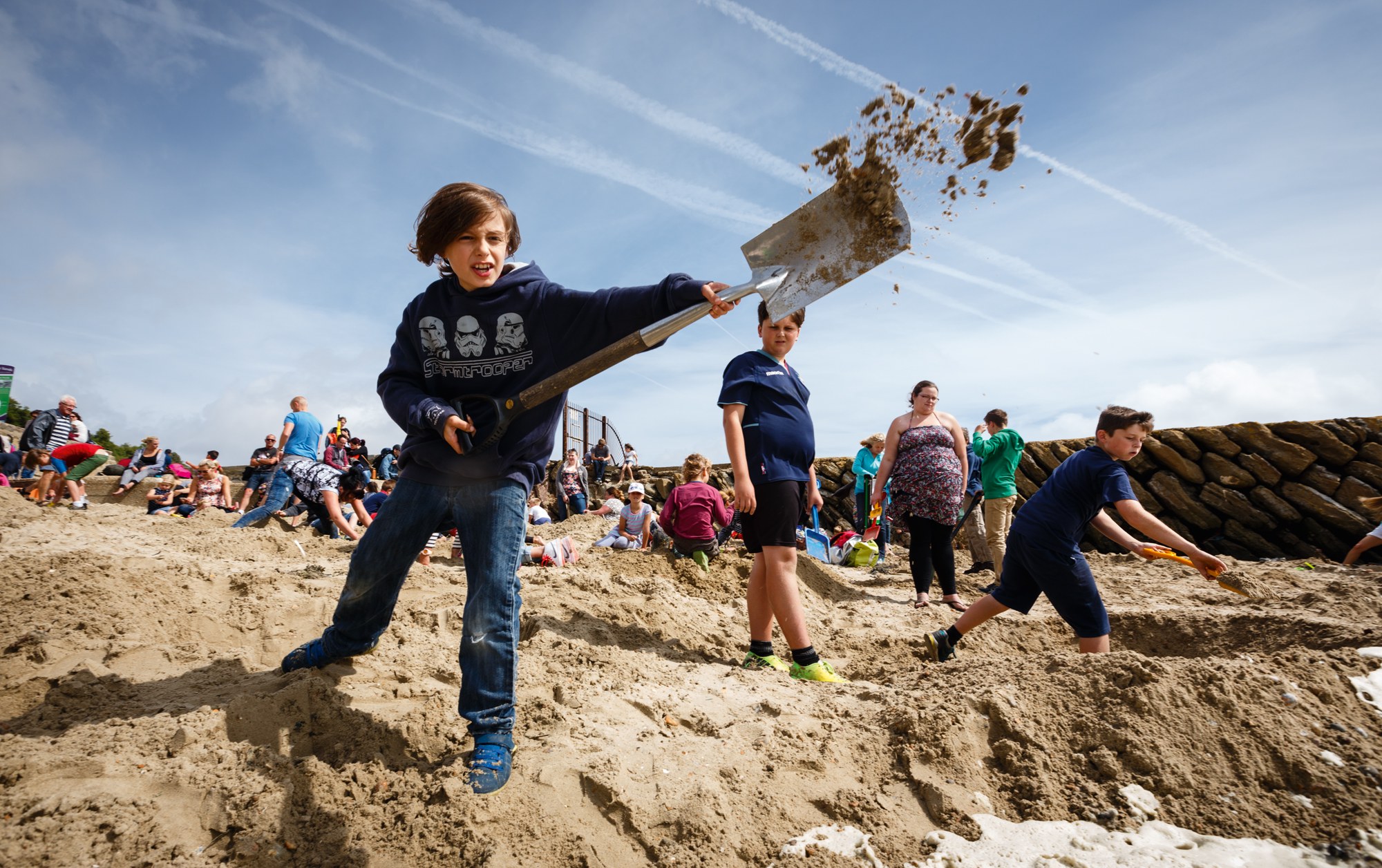 And finally to the future: in the spring of 2014, a thousand saplings were planted in Nordmarka, the densely forested region north of Oslo. Some 3,500 miles away, writer Margaret Atwood agreed to write a text that would remain unread for one hundred years. Each subsequent year until 2114, a different writer will similarly contribute a text to the archive, held in a dedicated room in the city’s new Deichmanske Bibliotek public library – although no one will be allowed to read them. In 2114, the fully grown trees in Nordmarka will be cut down to provide the paper on which to print all hundred contributions together for the first time. A work by the British artist Katie Paterson, ‘Future Library’, is a work born out of a permanent public art programme for Oslo harbour, which acts as a gift for a future beyond our lifetime. Now that’s real permanence! 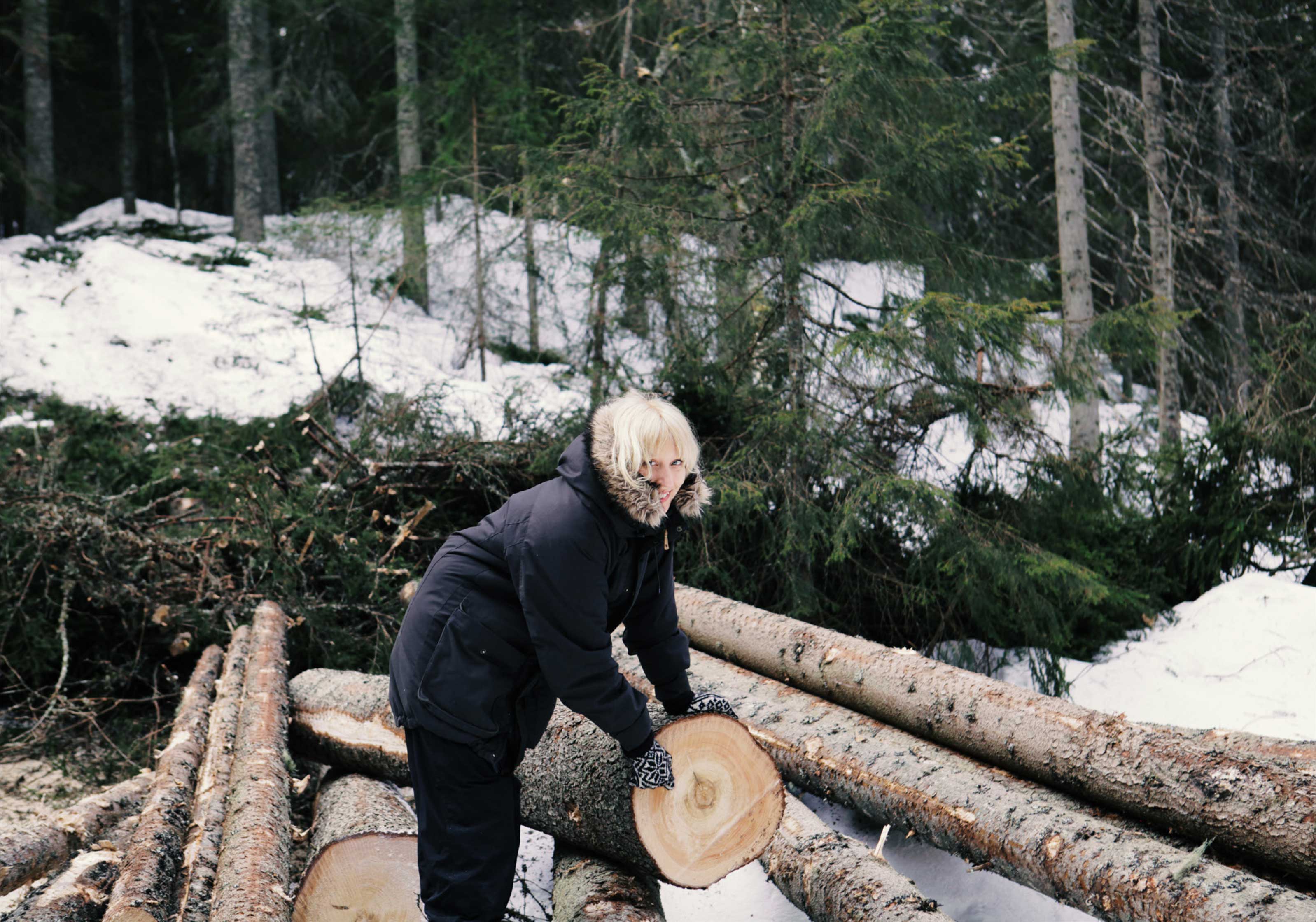 What sort of changes have you witnessed in the public art world during the decade covered by the book?
Artists have always worked beyond the boundaries of the art institution or studio, but in the last decade we’ve seen a shaking up of the place and time of ‘public art’, giving rise to fleeting interventions – be they subtle disturbances or startling provocations – and dispersed works which utilise online gaming technology to take the audience on unexpected journeys. The proliferation of reccurring large-scale international exhibitions such as Documenta in Kassel or the Venice Biennale has led to artists disturbing the cultural tourist’s bubble and putting them in direct contact with the social conditions that are often disguised behind the gloss of a contemporary art carnival.

But perhaps the most fundamental change in public art has been the increasing involvement of the public as active participants, often through an astute use of social media. In contrast the fleeting enjoyment of a mass spectacle, many artworks now invite the public to be more than consumers, involving them in the making of a work, or giving chances for their responses to become a part of the work. The result is a greater chance for artworks to resonate with us more deeply and to change the way in which we see and act in the world.

Could you briefly outline the debates surrounding public art today and why there’s a feeling that there’s an urgent need to redefine our thinking about it?
In collective imagination, public art is cast either as the controversial, uninvited guest or the mass entertainer. Characterised by monumental scale or mass appeal, the successful public artwork is often judged against its ability to galvanise popular opinion and contribute positively to place-making. Invariably if it fails on either count, it is judged against its price tag. British journalist Jonathan Jones has decried public art as “a production line for boring art, and mavericks have no place in its dreary ethic.” 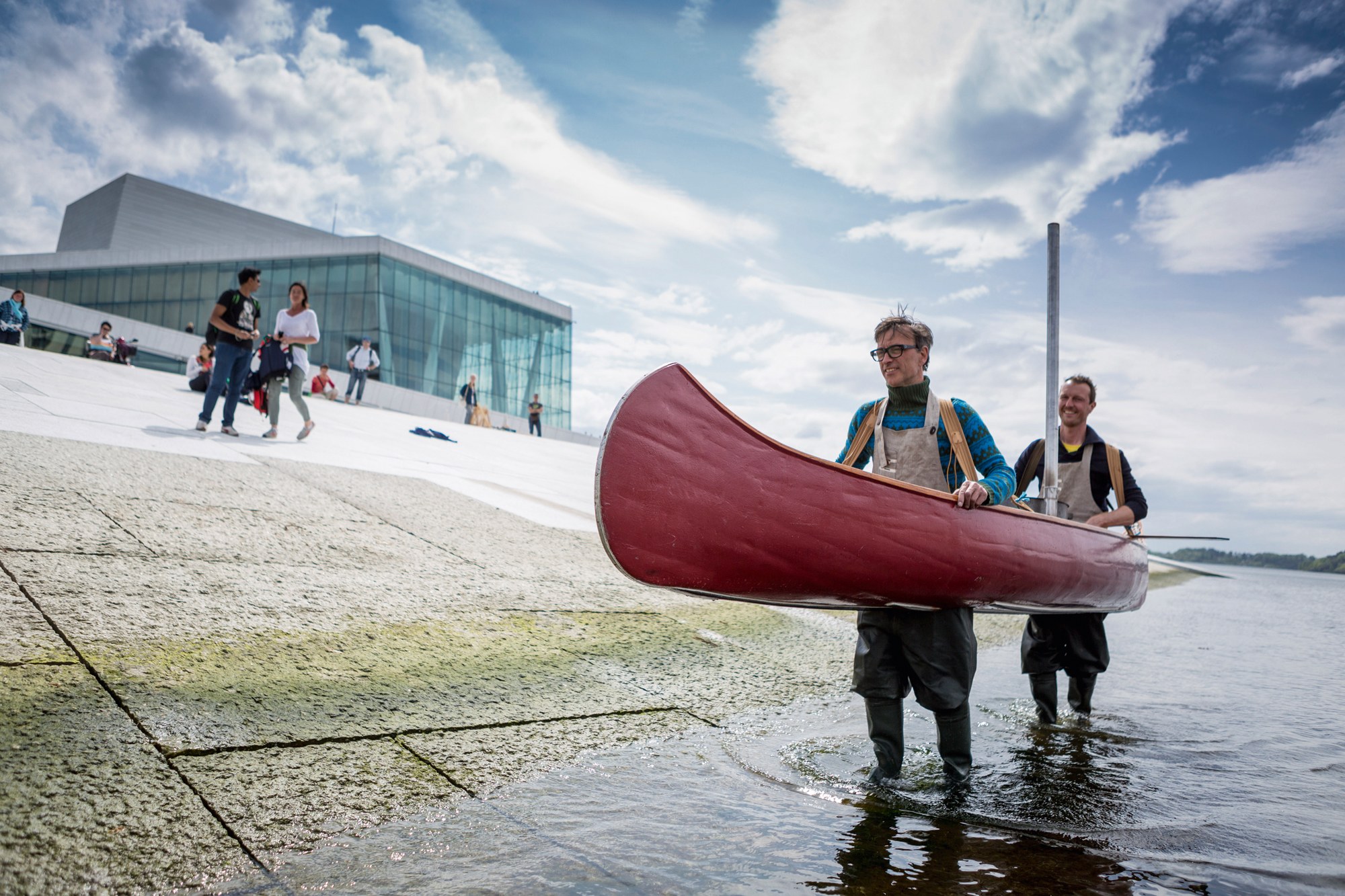 And yet this myopic view of public art masks its recent transformation beyond the gigantism of landmark sculpture, the mass appeal of participatory performance or the embeddedness of urban design. Towns and cities across the world are locked into a one-size fits all style of public art commissioning – a kind of cultural arms race. In a culture of globalised brands and clone towns, we hanker after authentic, distinctive places. So I say, if we are place-making, then let’s make unusual places. We need smart urban design, uplifting street lighting and landmark buildings, but public art can do so much more than decorate. The days of bronze heroes and roundabout baubles are numbered.

What’s the future for public art? What are the forces and/or changes that will drive the evolution of public art over the decade to come?
We’re at a moment of profound change for the arts. In light of threats of further cuts from the British Treasury to arts funding and increased competition for public subsidy, it’s time we made a fundamental change to how public art funds are allocated at local government level through the planning system. In 2012, funding for public art in the UK from Local Authorities alone totalled £22m, which is comparable to the amount spent on public and street arts through Arts Council England’s Grants for Arts over eight years between 2003 and 2011. Economic growth is likely to bring increased private sector funding for public art because public art is aligned to public sector policies such as planning, regeneration, health and wellbeing and tourism. But to invest in new forms of public art requires a reshaping of our understanding of how public art is commissioned, produced, presented and consumed.

Commissioning public art is not a simple design-and-build-process. Artworks arrive through a series of accidents, failures and experiments. Moments of uncertainty and rethinking are the points at which the artwork comes into focus. So the future of public art rests upon whether we as curators, producers, arts organisations, funders, developers and policy-makers understand what contribution artists can make to the future of the places where we live and work and invest in their process. To do this, we’ll need to skill up our arts organisations in new ways to tell the story, nurture new producing talent, win the trust of local authorities and developers to use funds for public art in new and surprising ways which give them a greater social return on investment, and perhaps most importantly, find new ways of getting under the skin of a place to grow public art projects from the ground-up.

Linkedin
RELATED ARTICLES
OTHER ARTICLES
Independent publishing is in fine health. We asked Ruth Jamieson, author of Print is Dead. Long Live Print, about her favourite magazines and how to survive in a fiercely competitive industry.
The 'Godfather of Conceptual Art' is back with new work exhibited in London and Paris and it's as funny and subversive as ever.
Art and photography that looks back on moments of conflict to consider the ongoing effects on people and places in the shadows of these traumatic events.