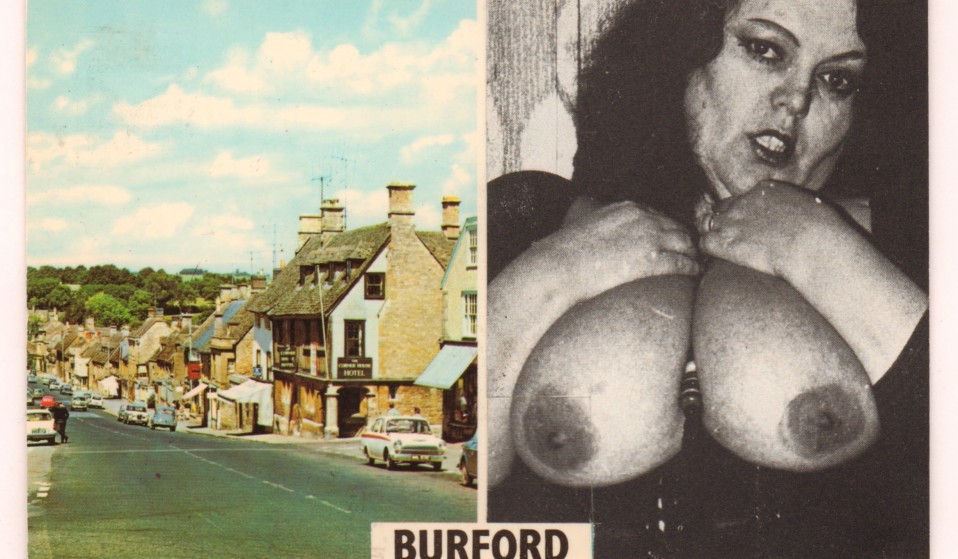 For his new postcard series, artist James Springall pieces together collages highlighting the anxieties of the UK’s small towns.

For his new postcard series, artist James Springall pieces together collages highlighting the anxieties of the UK’s small towns.

James Springall’s pieced-together collages are known for their punchy, provocative aesthetic – and his latest project, Wish You Weren’t Here, is no different. “I wanted to say something about British culture,” the Newcastle-born artist says. “I thought it would be interesting to peel back the respectable veneer slightly and expose the realities, the anxieties, and the weirdness.”

A combination of found images from old books and magazines, the project is set up like a postcard series. Each card represents a town in the UK, and is accompanied by another contrasting – and decidedly less flattering – image. Seasides lie alongside gurning clubbers; white nationalists pose with ancient cathedrals; naked businessmen stroll along the coast of Swanage. It’s a project that’s surreal, funny, and quietly political.

“I thought of it more as an exposé on the realities and quirks of British life,” Springall explains. “I see the series more as a slightly tongue-in-cheek state-of-the-nation commentary, as opposed to a direct attack on Biggleswade, or wherever.” We caught up with him to find out more. 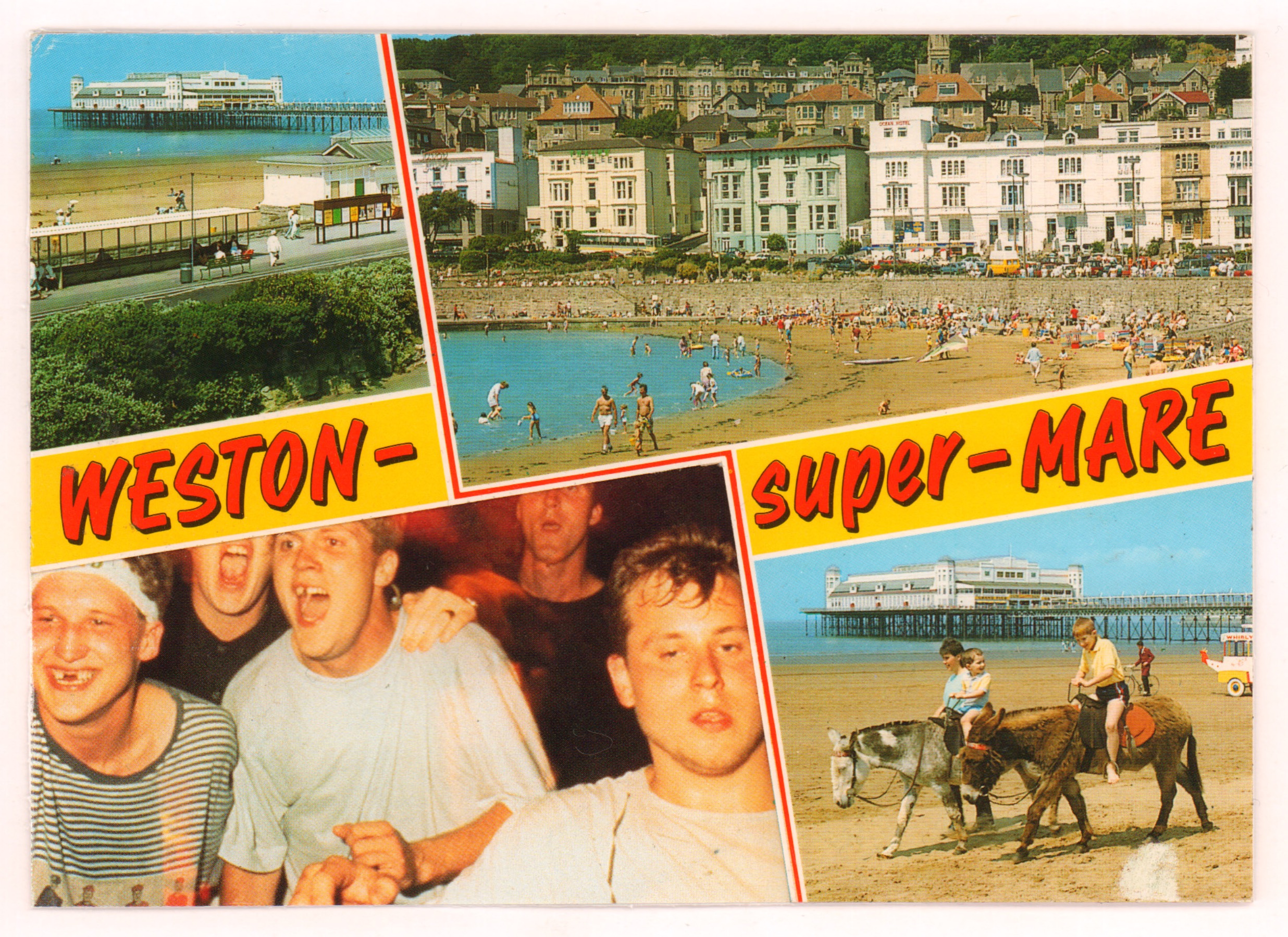 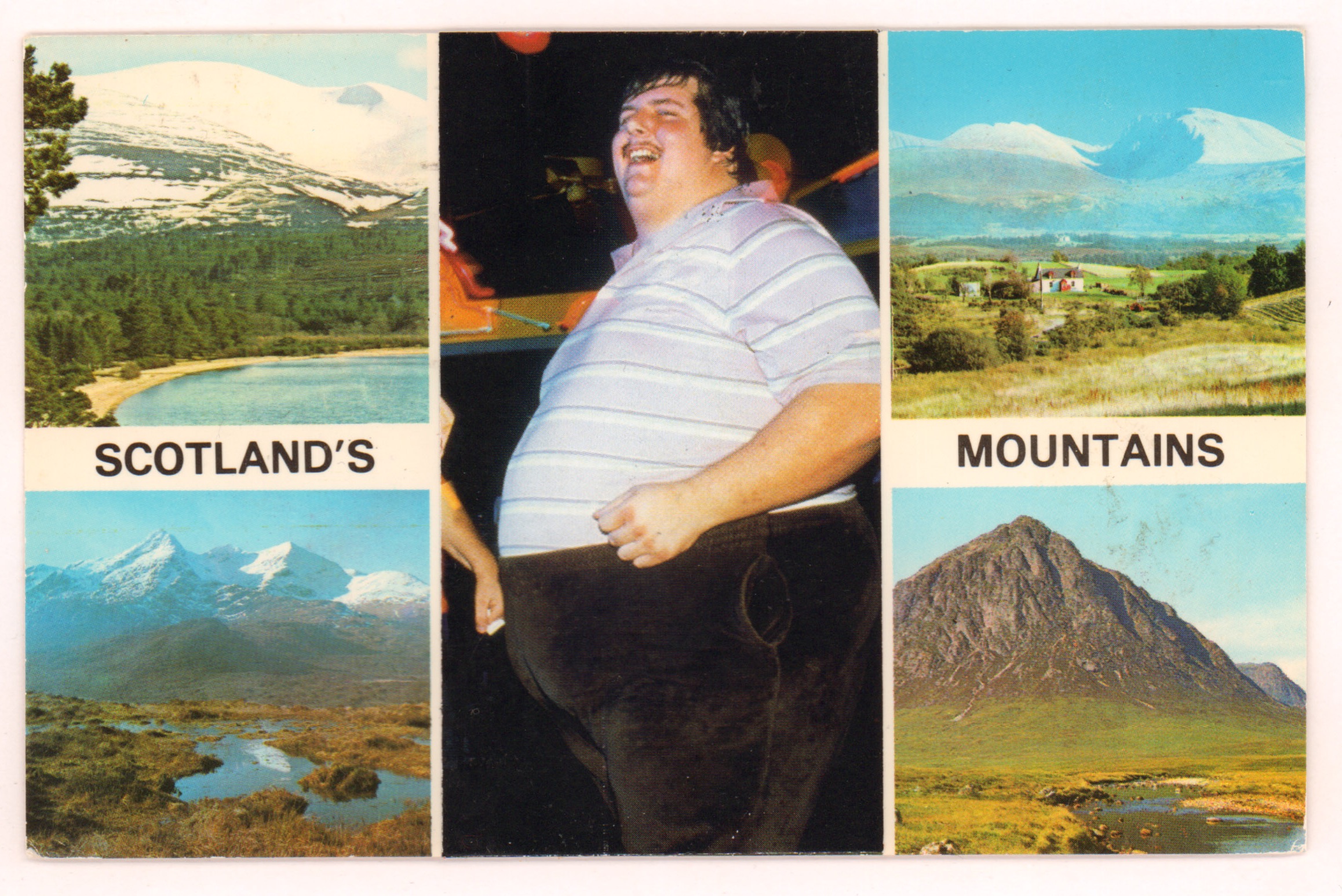 Where are you from, and how has this shaped your view of British culture?
I was brought up in Newcastle, and when I was younger we used to go on little family outings to various villages and provincial towns in Northern England and Scotland. We had a static caravan in Barnard Castle, and I remember a holiday in Jersey too. I do recall, even then, feeling a somewhat stifling atmosphere in some of those places; a certain tension. And certainly, I remember a lot of bad food and eccentric characters. Since then, I’ve visited various places up and down the country and the oddness prevails. There’s often a kind of strangeness floating around small towns that you can’t quite put your finger on; and, invariably, a slight whiff of violence in the air on a Friday night. 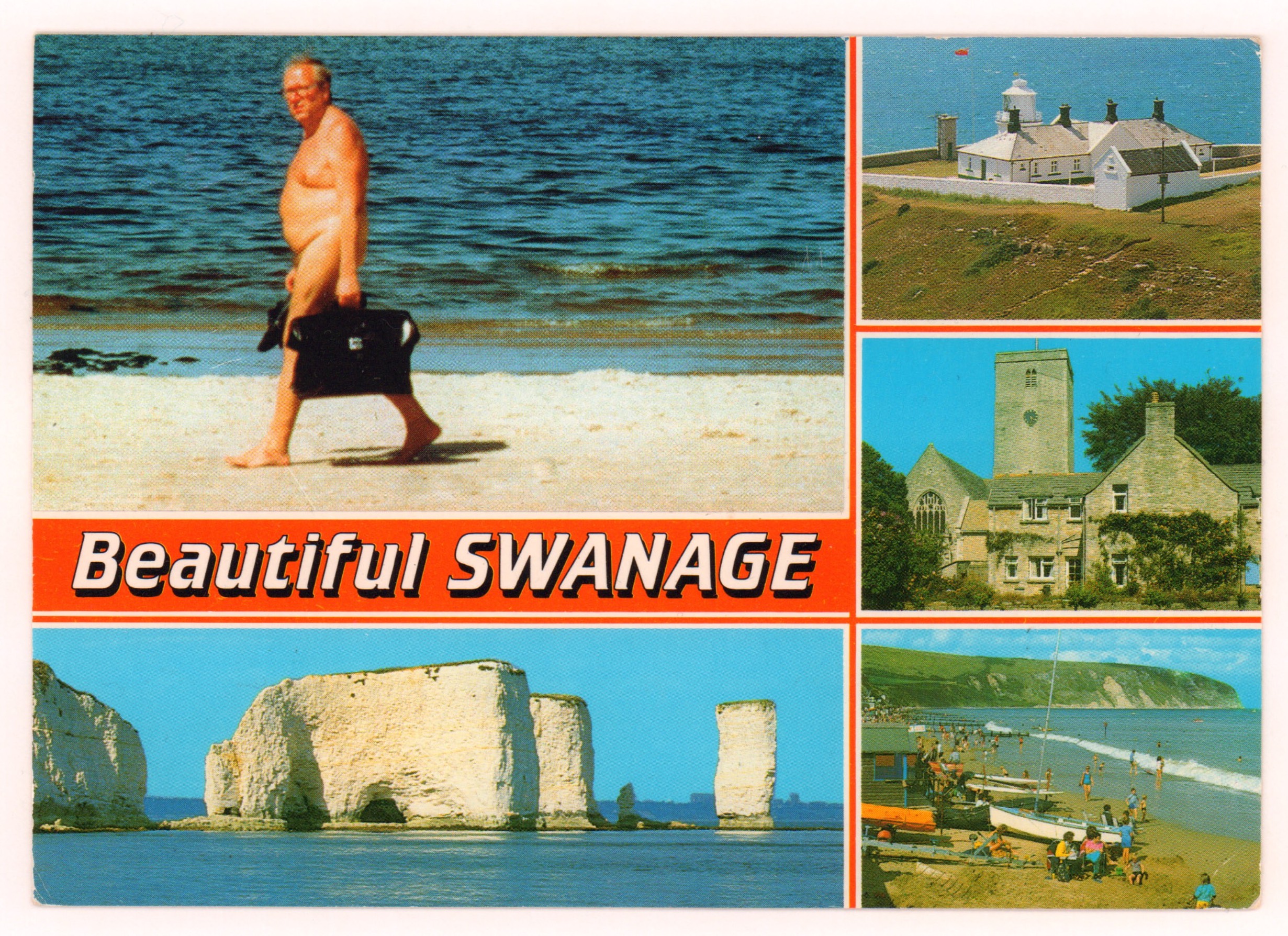 This project juxtaposes new imagery with found postcards. Where did you find everything?
I have a large collection of old books, postcards, and magazines that I sourced the images from. The final collages use ones that I felt broadly suited the places in question. When you work with found imagery in this way you are bound, to a certain extent, by what you have to hand and what fits where. I love that limitation. It often makes for more jarring juxtapositions. Conceptually, I suppose a lot of the images I’ve added are interchangeable between the locations. I’m sure dumped mattresses aren’t solely confined to Hastings, for example. 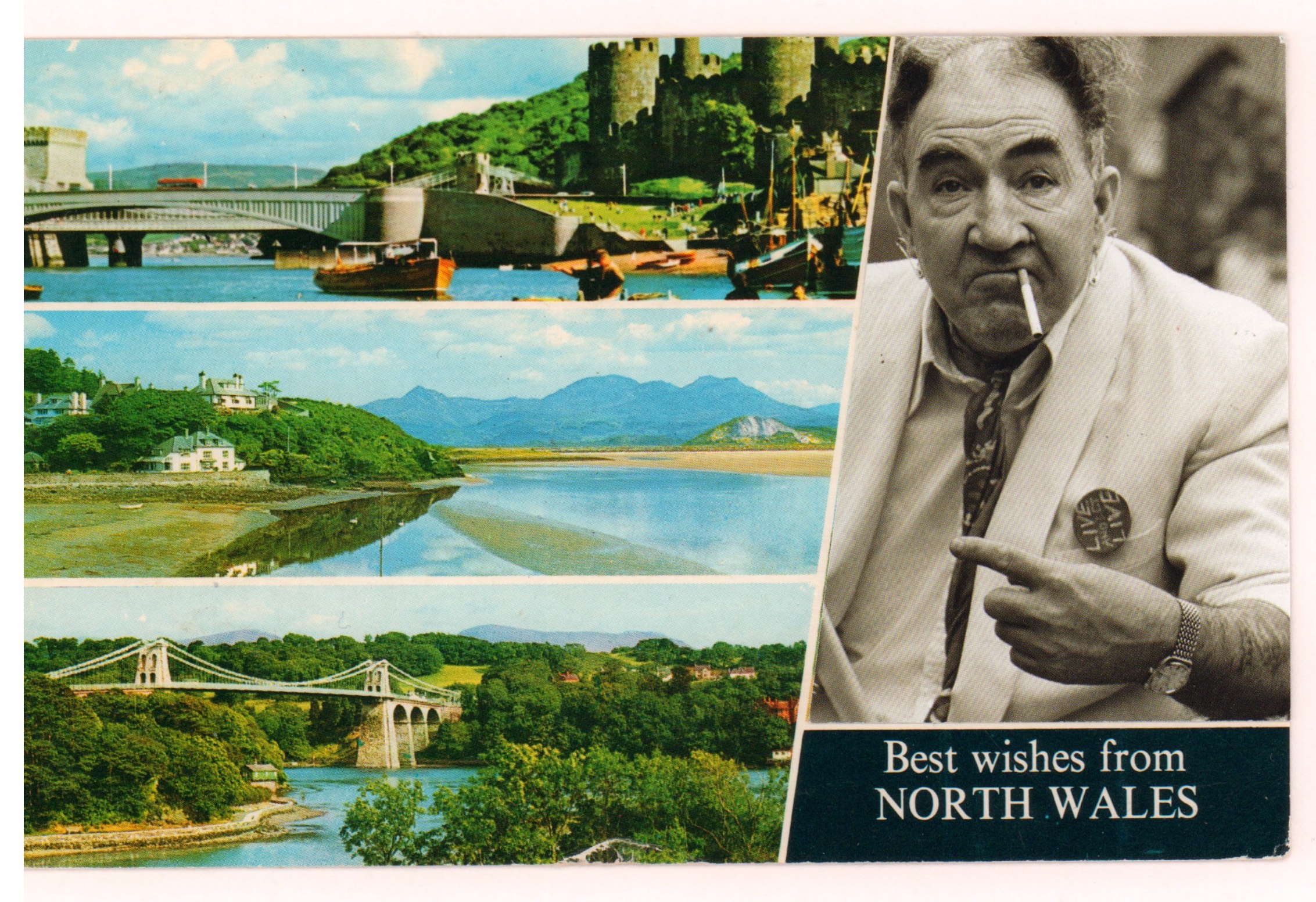 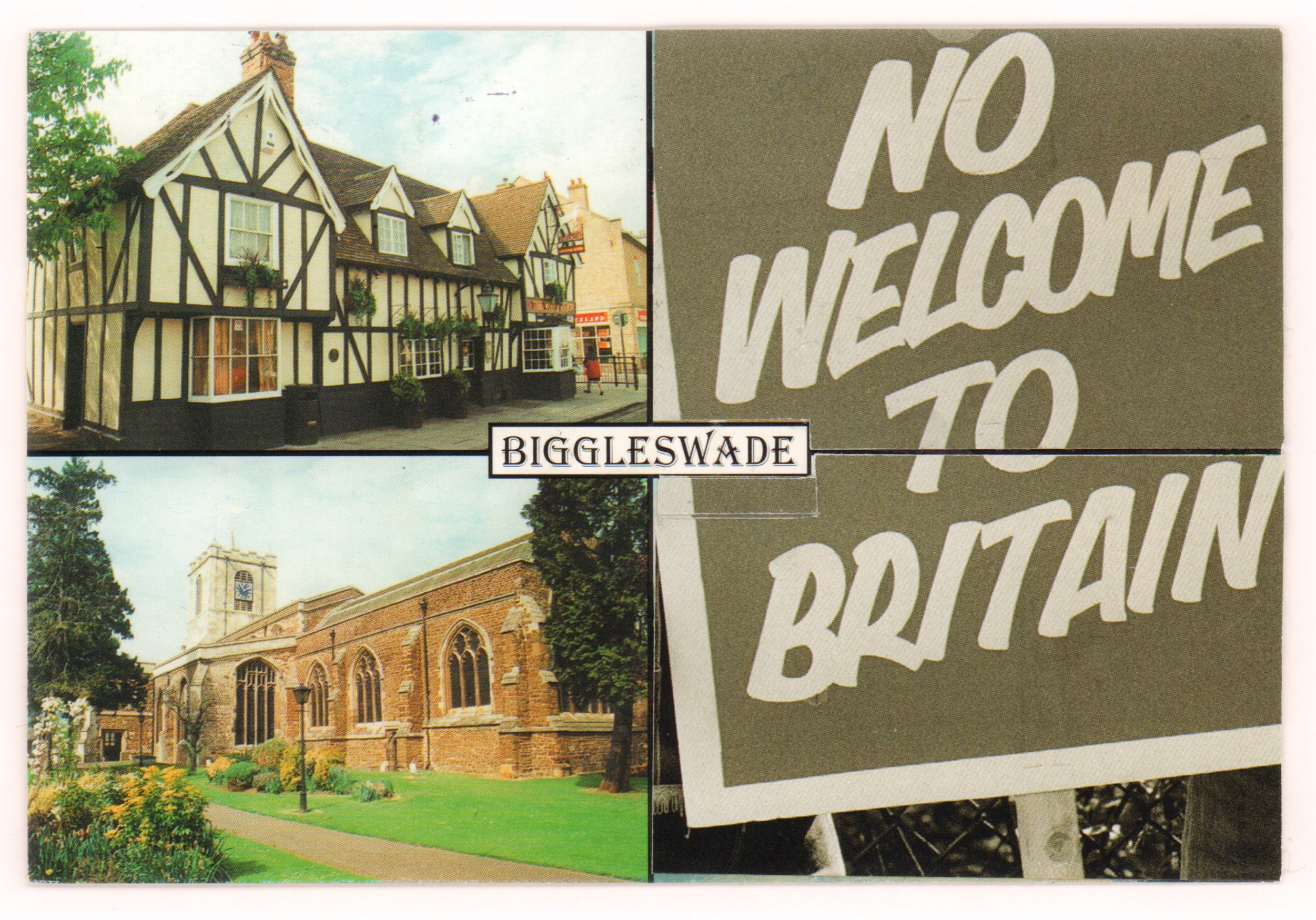 The idea of ‘Britishness’ is widely discussed, especially now. Do you see this as a political project?
I didn’t set out for it to be political, but I think it became political by default. Especially when you consider the fact that Government’s tend to sugar coat things, don’t they? They like to project a kind of picture perfect version of how things are and how wonderful they’re doing. When in reality, things aren’t always that great. Brexit has certainly influenced my thinking recently. It’s brought to the surface an attitude that is always rumbling underneath somewhere and, from time to time, rears its ugly head. This is one of those times and some of these collages are my attempt to reflect that. I suppose it’s like holding a mirror up to British society but doing it first thing in the morning when it hasn’t had a chance to comb its hair and is looking a little bleary-eyed and worse for wear. 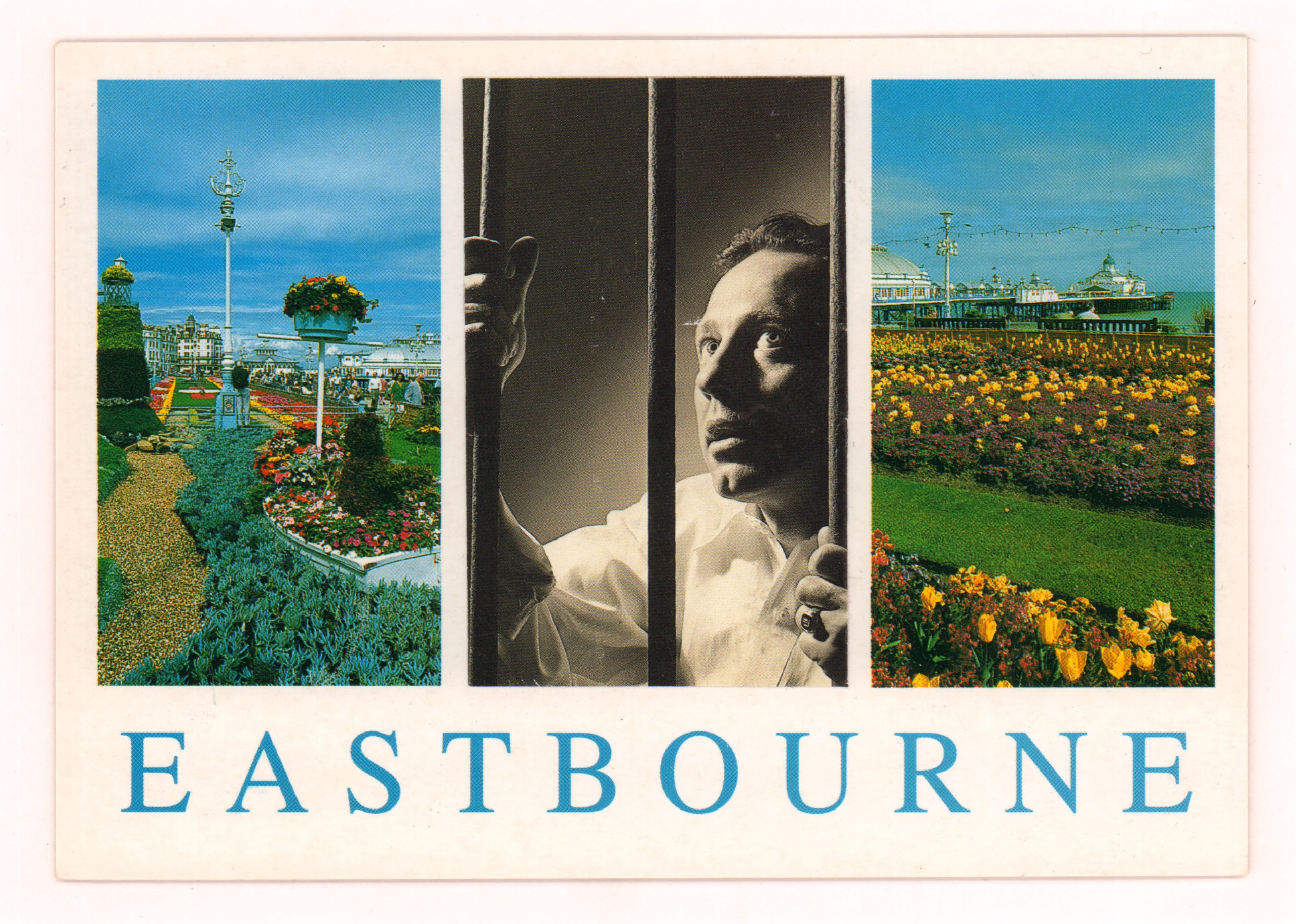 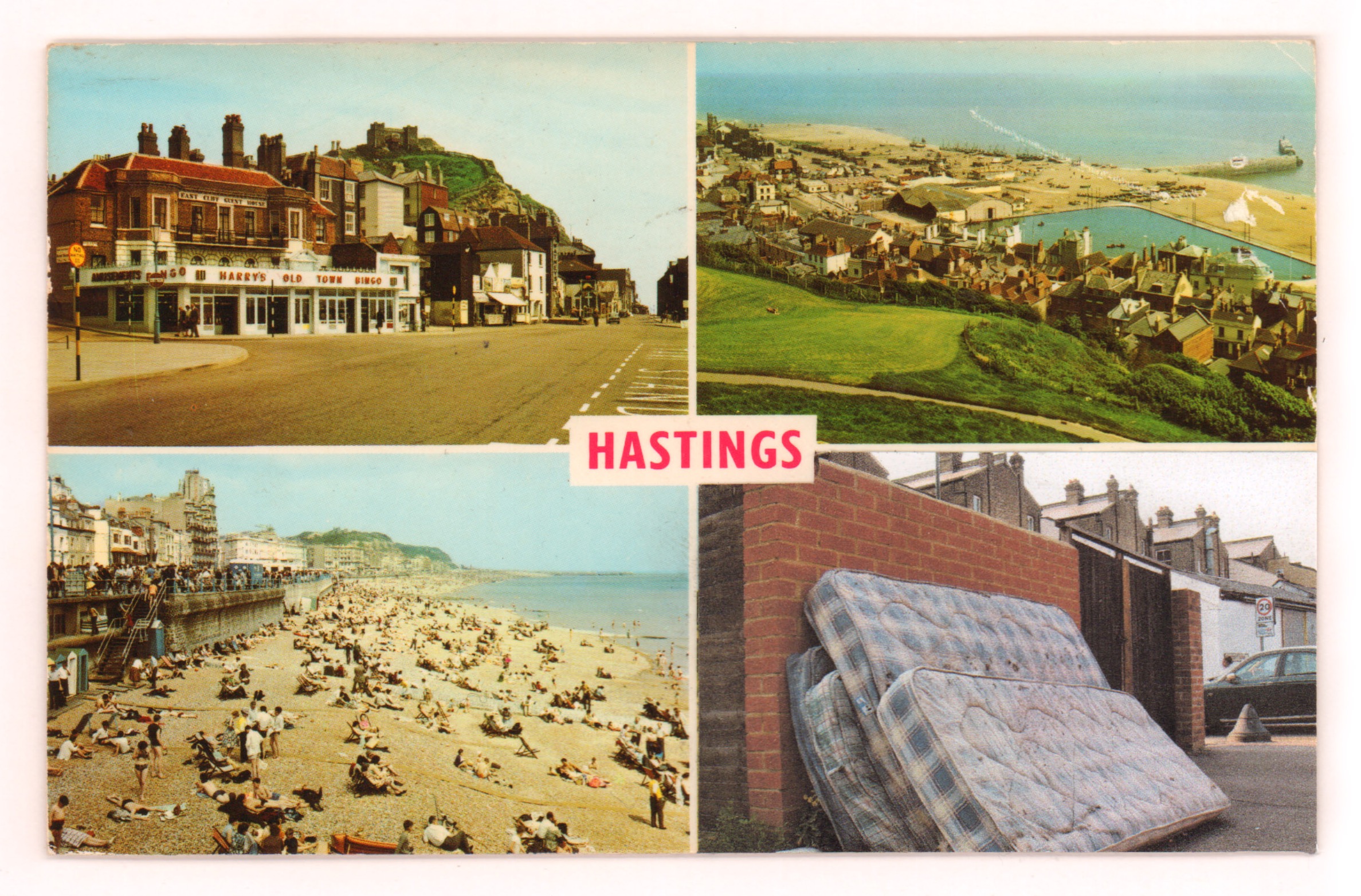 Is there a disconnect between how British culture is seen, and how it truly is?
I think there’s still a disconnect there, yes. Perhaps people looking at our culture from afar think it’s all sheep grazing in rolling fields and tea being sipped from china cups, but there’s another side to it too. Don’t get me wrong, there are some absolutely wonderful things about British culture, and I can definitely see the beauty in a lot of our eccentricities and foibles, it’s just that there are some not-so-wonderful bits as well, and this work explores the side that isn’t often advertised. Using postcards is just a good way to help bridge the gap, as obviously they’d typically only show the pretty bits. 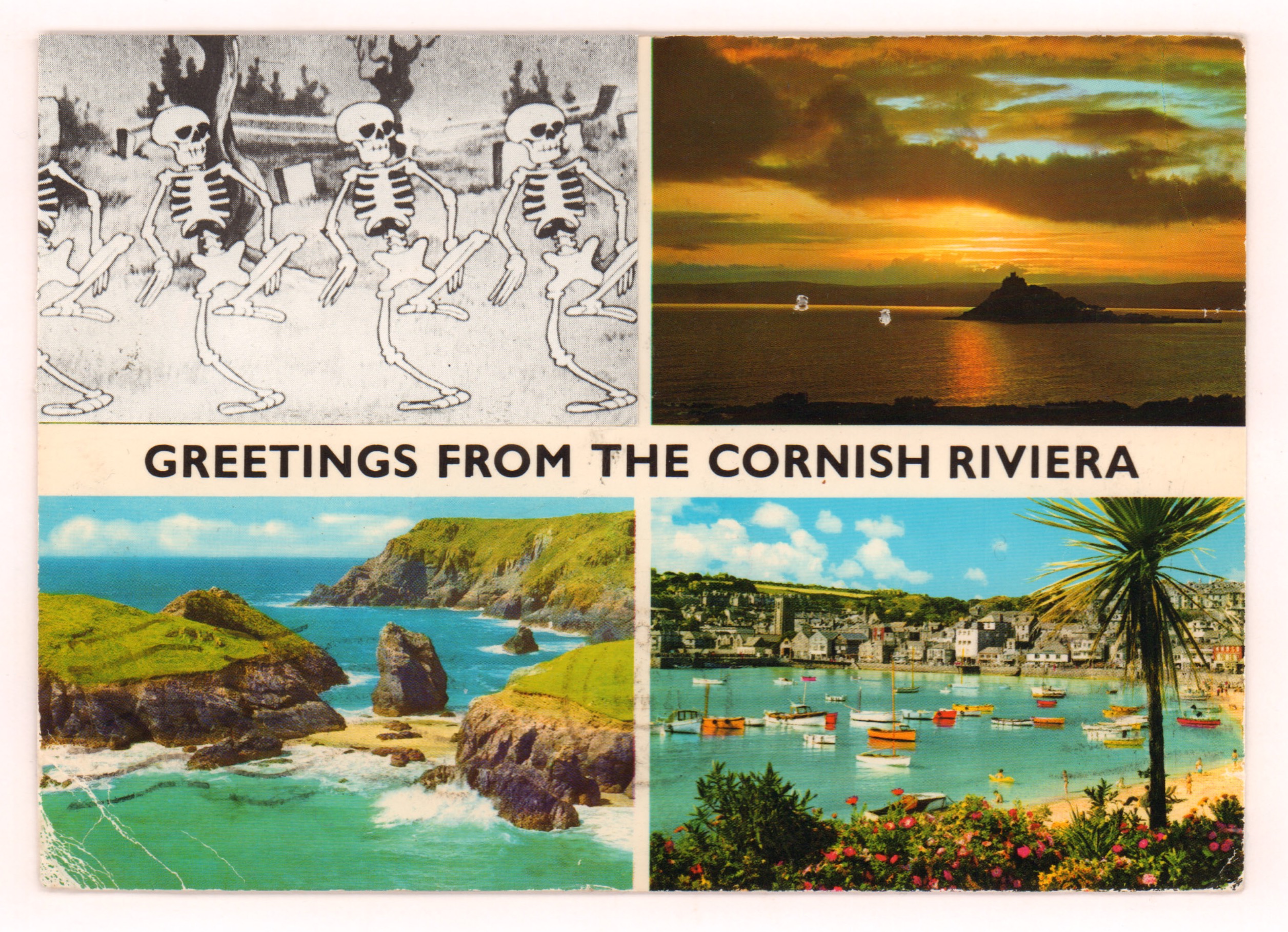 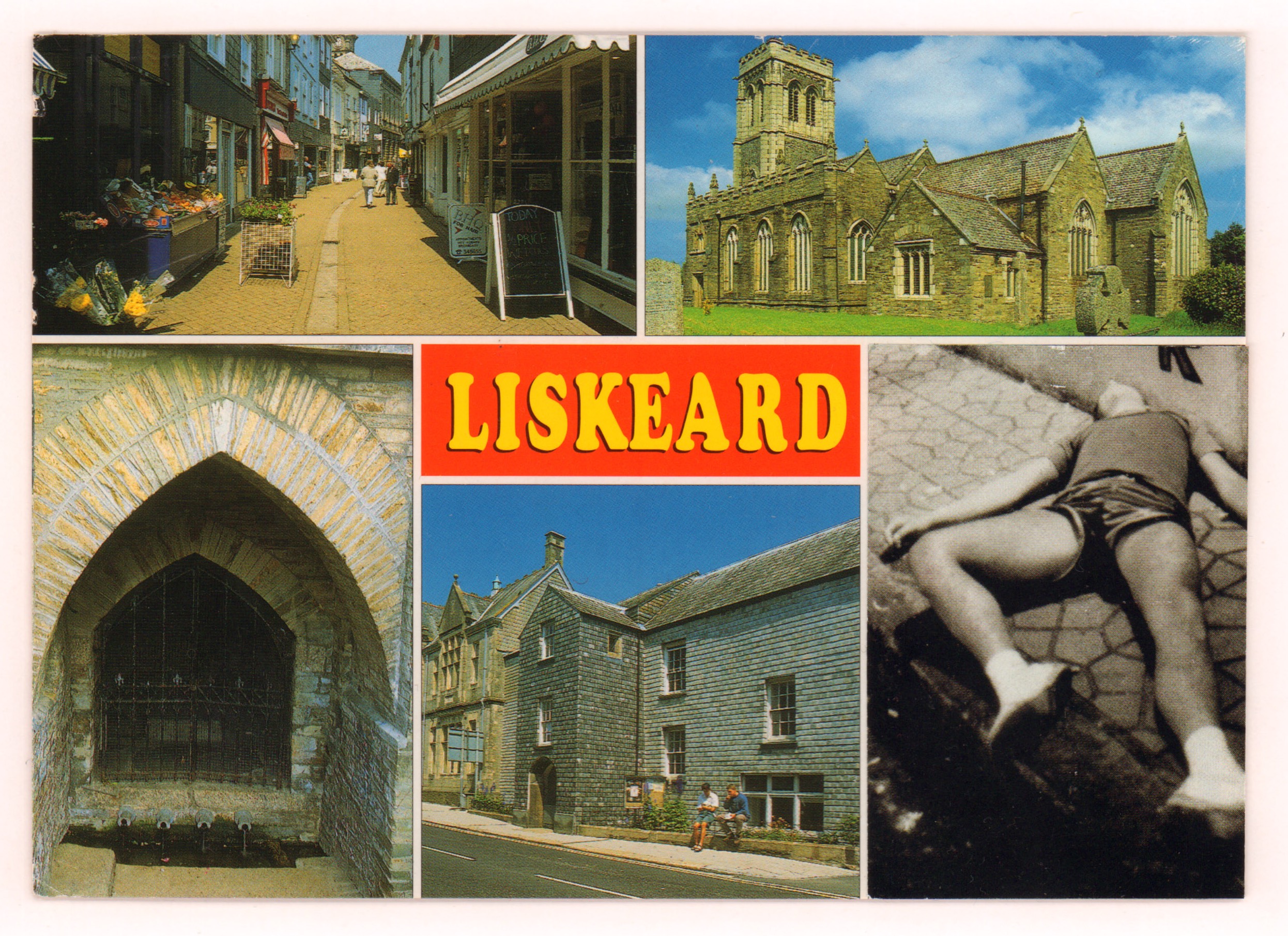 How did you first get into the art world? What was your journey?
I just started to make the kind of work I wanted to make, and put it out there online. I didn’t go to art school and I’m not represented by a gallery. I guess, in a way, I’m making outsider art. Actually, I just looked up the definition for outsider art and it reads: ‘noun art produced by untrained artists, for example children or mentally ill people’. So make of that what you will!

What do you hope to work on next?
I’m currently co-curating an exhibition of collage art with a collective called The Weird Show. That’s going to be put on by Jealous Gallery in February next year. Our aim is to show the less clichéd side of collage and highlight the myriad possibilities of the genre as an art form. As well as to have some fun! 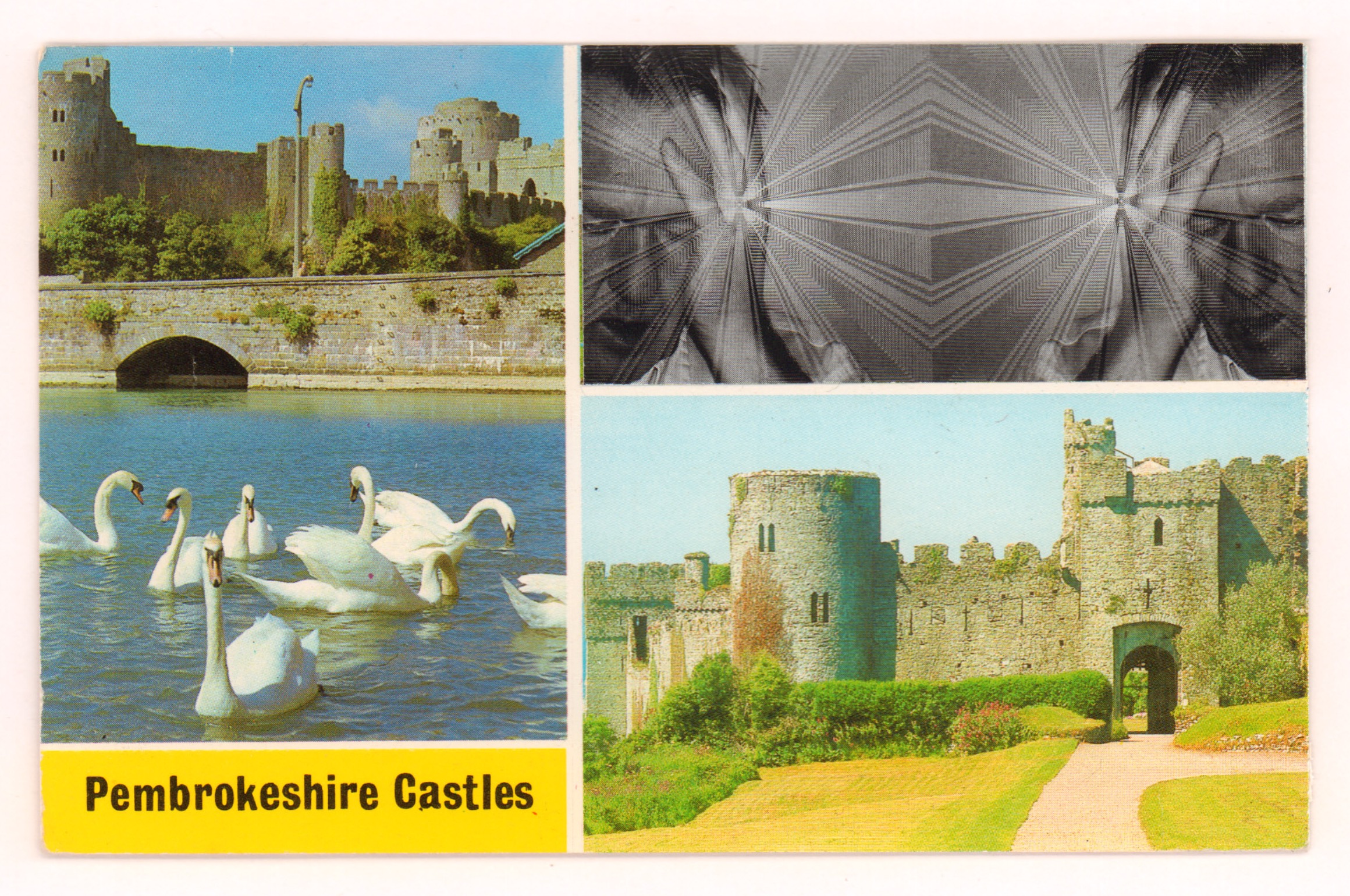 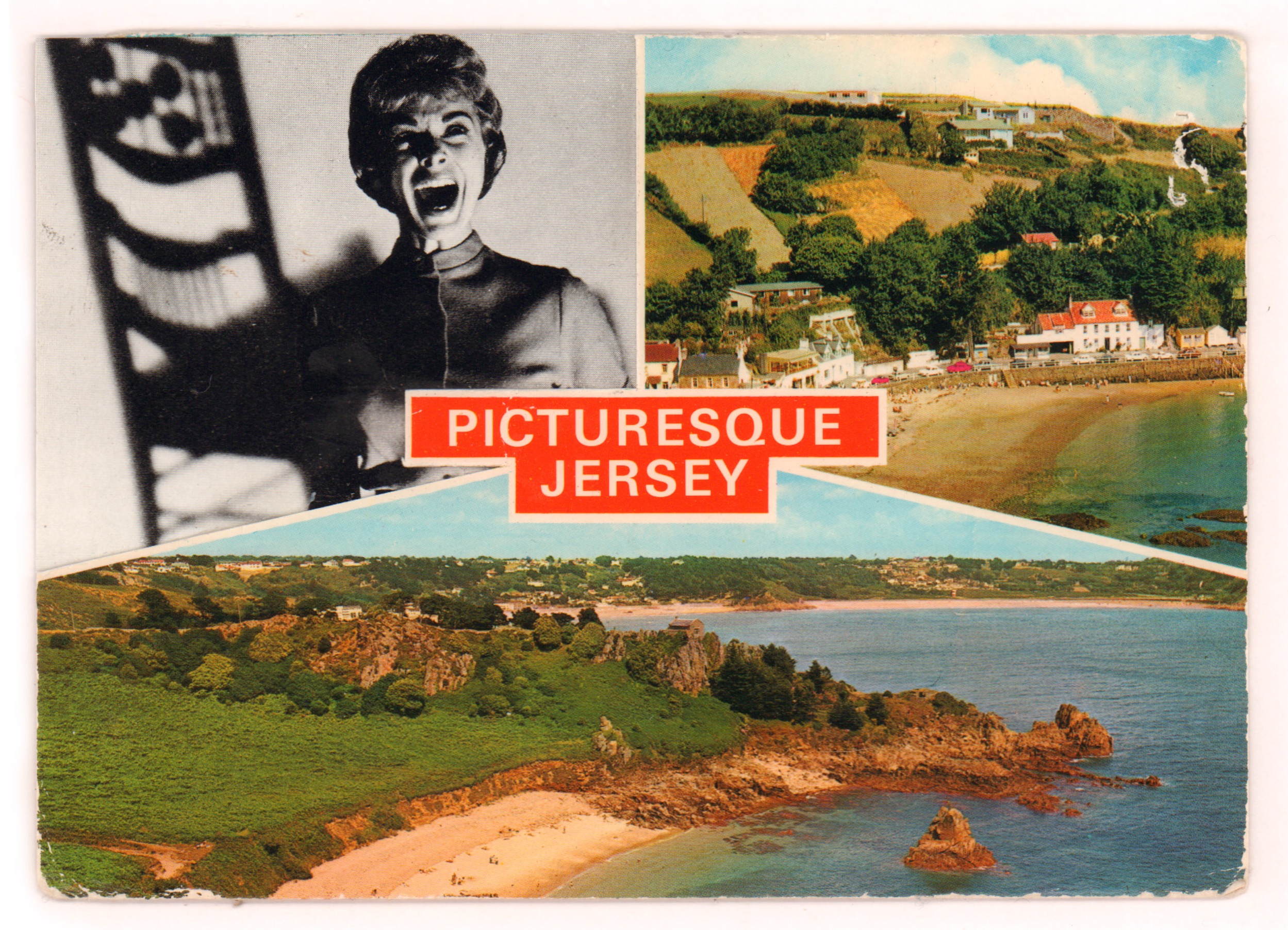 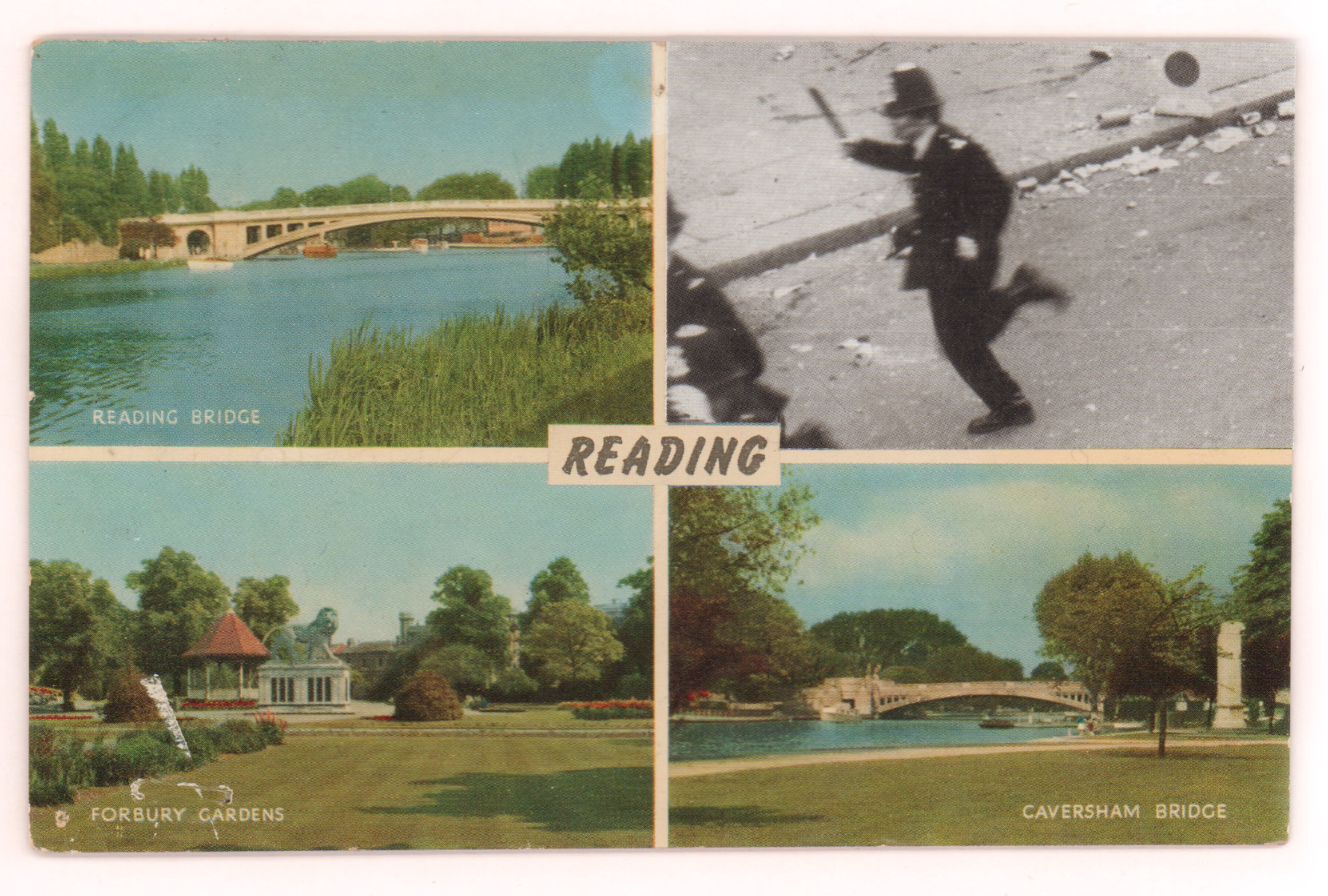 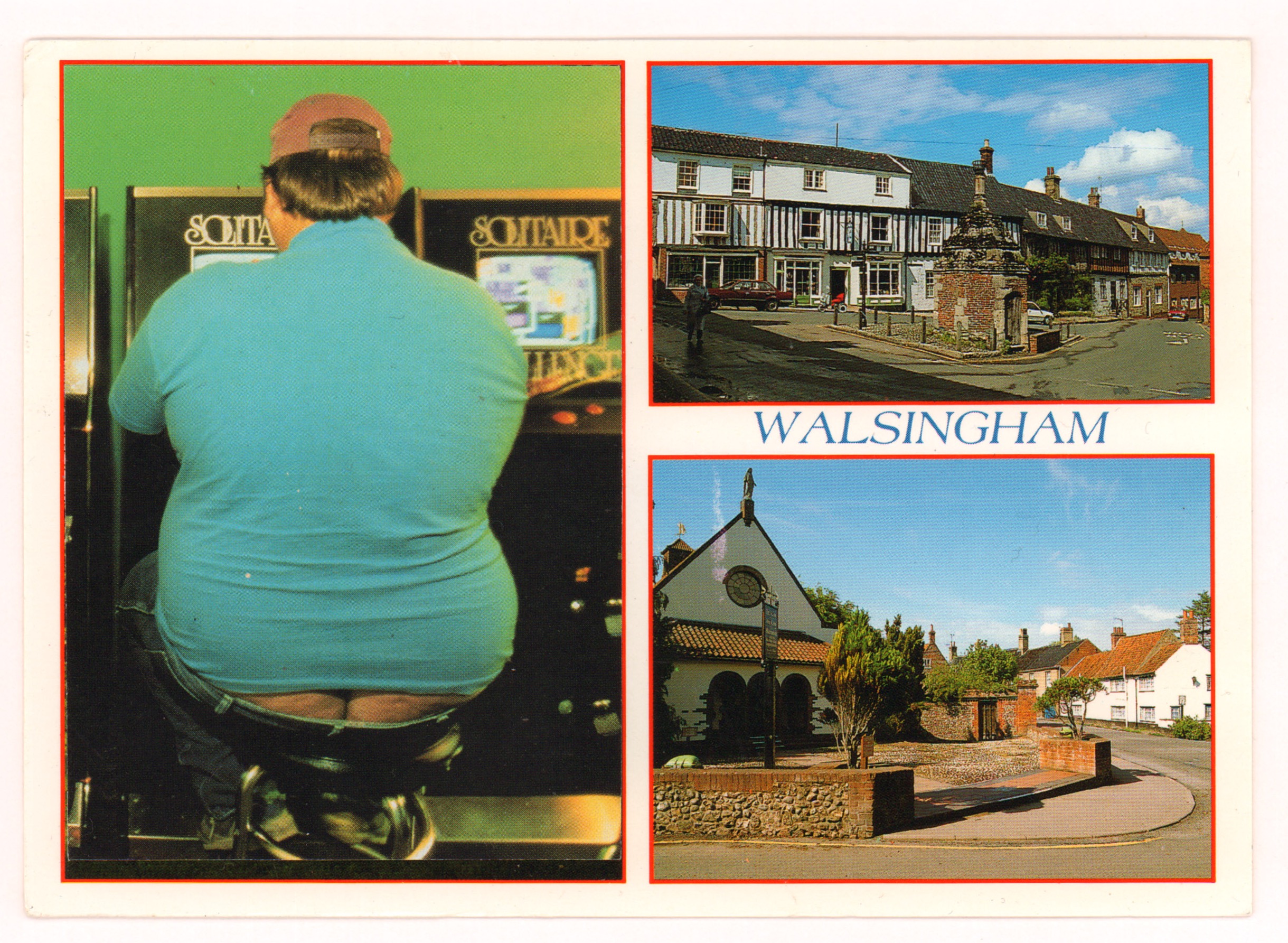 See more of James Springall’s work on his official website.

Linkedin
RELATED ARTICLES
OTHER ARTICLES
After building his reputation covering the US civil rights movement in the 1960s, the photographer went on to produce some of the most enduring images of the past century.
Theo McInnes’s photos of the annual event provide an intriguing snapshot of contemporary Britain.
AI companies that develop image-generators using copyrighted artwork from the internet are coming under fire from artists who say that it amounts to theft.
The action took place in response to the 200 asylum-seeking children who were placed in hotels run by the Home Office who have gone missing.
A recent High Court ruling against the right to wild camp in Dartmoor National Park sparked the largest land protest in history – and campaigners say their fight is not over yet.
Tristan O’Neill’s shots of dancers caught in moments of reverie at the height of rave’s golden age are a testament to the UK’s legendary club culture.