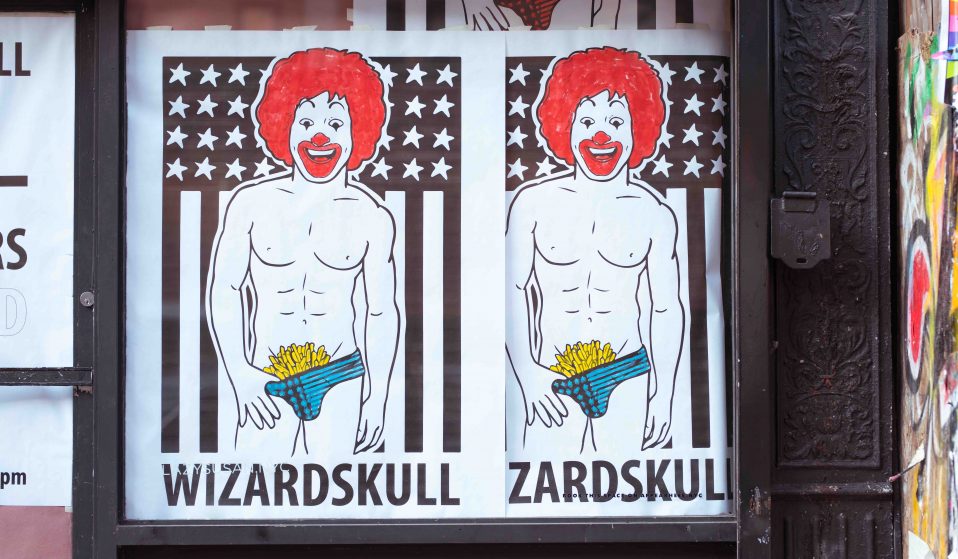 Wizard Skull’s latest New York exhibition has divided audiences – is it a clever commentary on exclusivity and social media culture, or a provocative waste of time?

Wizard Skull’s latest New York exhibition has divided audiences – is it a clever commentary on exclusivity and social media culture, or a provocative waste of time?

“[These] mutts are disrespecting my artistic vision,” wrote New York artist Wizard Skull in a recent Instagram post, referring to critics of his controversial new show, On My Level. The week-long exhibition, which ran at the Lazy Susan Gallery earlier this month, was only accessible to visitors who have at least 35,000 followers on social media.

Wizard Skull – real name Alexander Duke –  is no art novice: his work has previously appeared at New York’s MOMA. In recent years, he’s become a ubiquitous face of the city’s art scene, where his freely distributed zines and cartoon-inspired pop art have won him many fans. On My Level, however – which the artist claims started out as somewhat of a joke – has divided audiences, and become a provocative commentary on social media culture.

“I feel the people who are most upset about this show are the people that secretly believe that followers really do reflect your social worth,” he says. “They’re just really angry that they don’t have a high number and can’t get in.”

Wizard Skull’s latest show has something of the Marcel Duchamp about it: like a deliberate attempt to provoke thought and reaction. It’s a ‘happening’ which has triggered a myriad of conversations around exclusivity, and the value that we place on social media numbers. Does Wizard Skull believe that followers equate to worthiness? 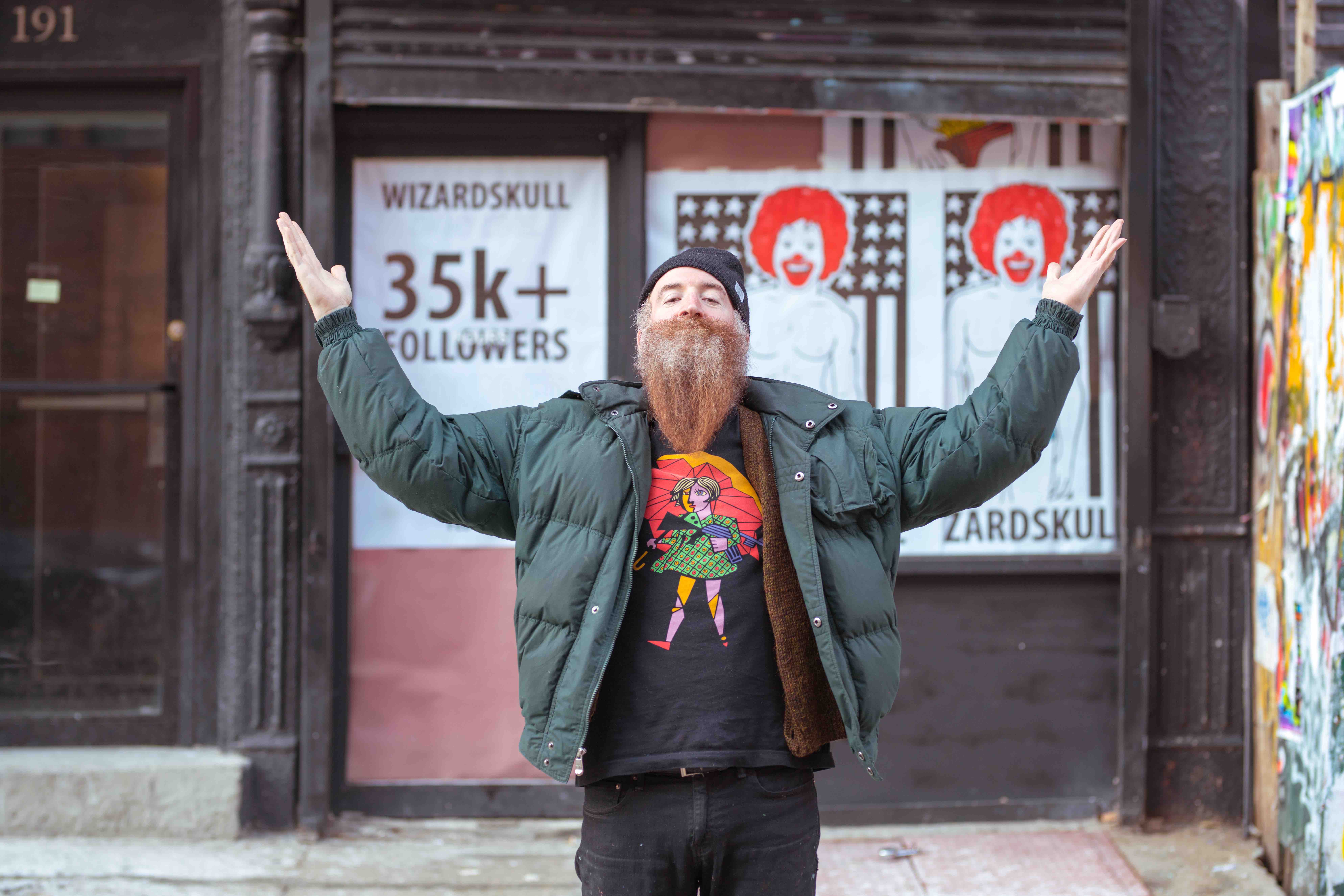 “From the perspective of an artist, social media has real worth,” he explains. “I don’t have to be part of an exclusive art industry, selling to galleries or museums. I can sell myself straight to the public.”

“But then there are amazing artists, who are recognised within the art world, that came up in a different era, who only have maybe a 1000 followers. It’s an interesting situation.”

There’s no doubting that in this brave new world of algorithms and Instastories, having a social media ‘presence’ gives an individual agency. Actors and models are hired every day based on their ‘reach’. For those using social media, we unconsciously make judgements about a person’s leverage on this planet when we discover their numbers – whether it’s a Tinder match or a prospective business partner, a large amount of Instagram followers lends an instant degree of credibility.

“The people that get my show’s premise, though, and who understand that social media is kind of a joke – even though it really is good for promoting yourself in whatever you do – are laughing at this show.

But it’s not all laughter. The artist admits that he has lost “actual friends” over the exclusive nature of On My Level. Two weeks ago, he was pulled from a street art podcast, which had been courting him for over a year.

“I thought there might be some negative comments, but the exclusivity thing has made people really furious,” he says, with incredulity. “Yet everything in society is based on exclusivity.” 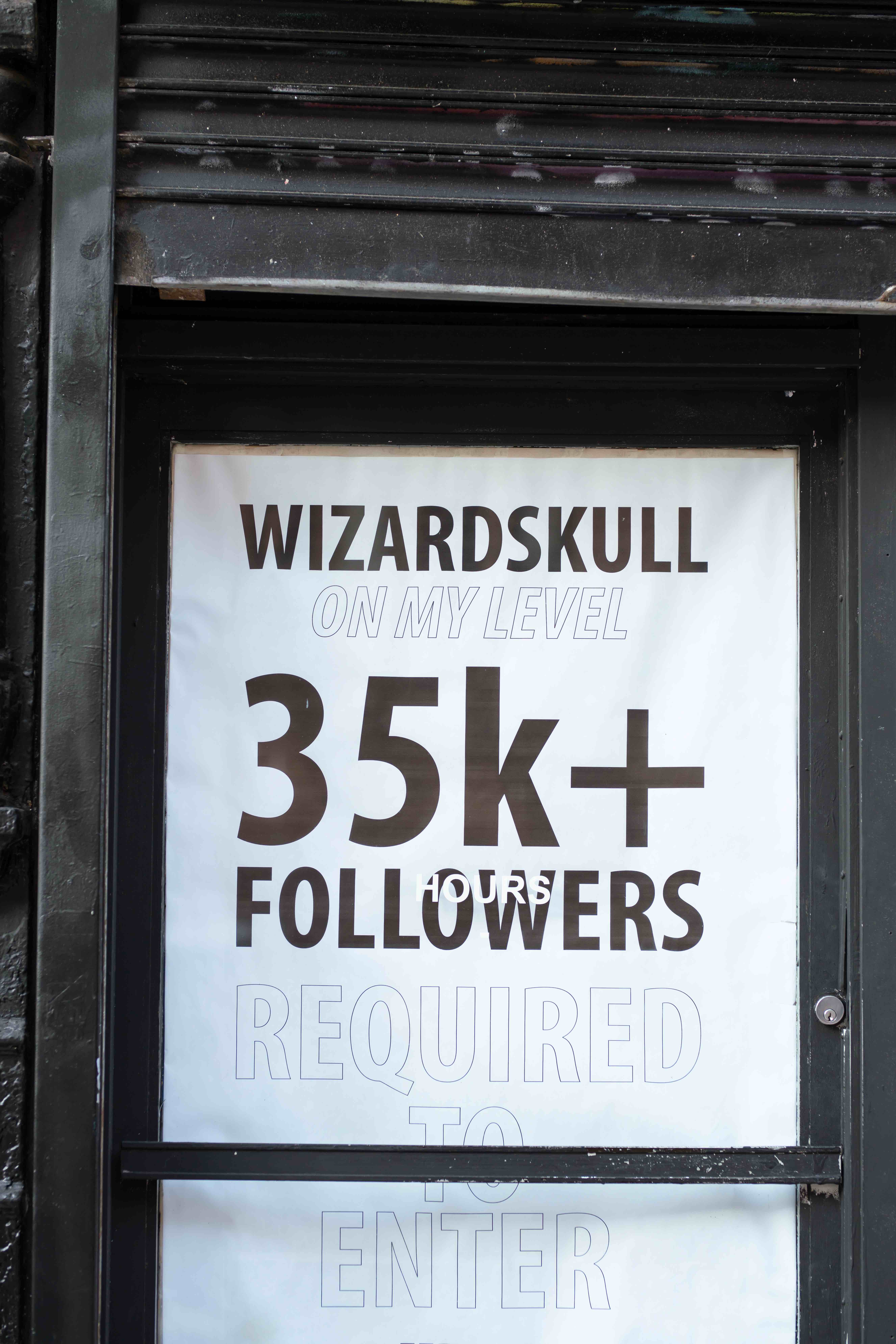 “Money is exclusivity. Access to restaurants, hotels, gym memberships. I feel like maybe everyone has accepted the notion of economic exclusivity, but won’t accept exclusivity when it’s presented like this.”

Originally from Jersey, the New York-based artist is no stranger to controversy. His previous works have seen him put beloved children’s cartoons in twisted sexual situations (in one of his Re-Animator works, The Incredible Hulk humps one of My Little Ponies), and his Ronald McDonald graffiti was largely scoffed at by Bushwick’s street art community. According to Duke, ‘purists’ of the artform felt he wasn’t taking the culture seriously enough. But then he doesn’t appear too fussed about preserving people’s egos or tradition: “as an artist, you have to accept that you’re going to get hated on no matter what. It’s a good sign.”

“When I first got hate comments I was really bummed, but they actually represent that people are feeling something about your stuff. The more people that get angry with this show, the more it inspires me to keep doing it.”

But social media – the platforms that Wizard Skull is critiquing through his show – is simultaneously being used to stir the conversation around it. Perhaps the most intriguing aspect of this entire episode, is deciphering how much of Wizard Skull’s output is art, and how much is the real person behind it?

“I’m real,” says Wizard Skull, quite defensively. “But I actually didn’t realise by saying don’t come to my show, I’d be saying ‘come to my show’ louder than ever.”

Whether authentic or not, Wizard Skull’s recent output has tongues wagging in New York’s art world – and he appears to be revelling in his status as an agent provocateur.

“If you’ve got your numbers up you can come in. It’s as simple as that.” 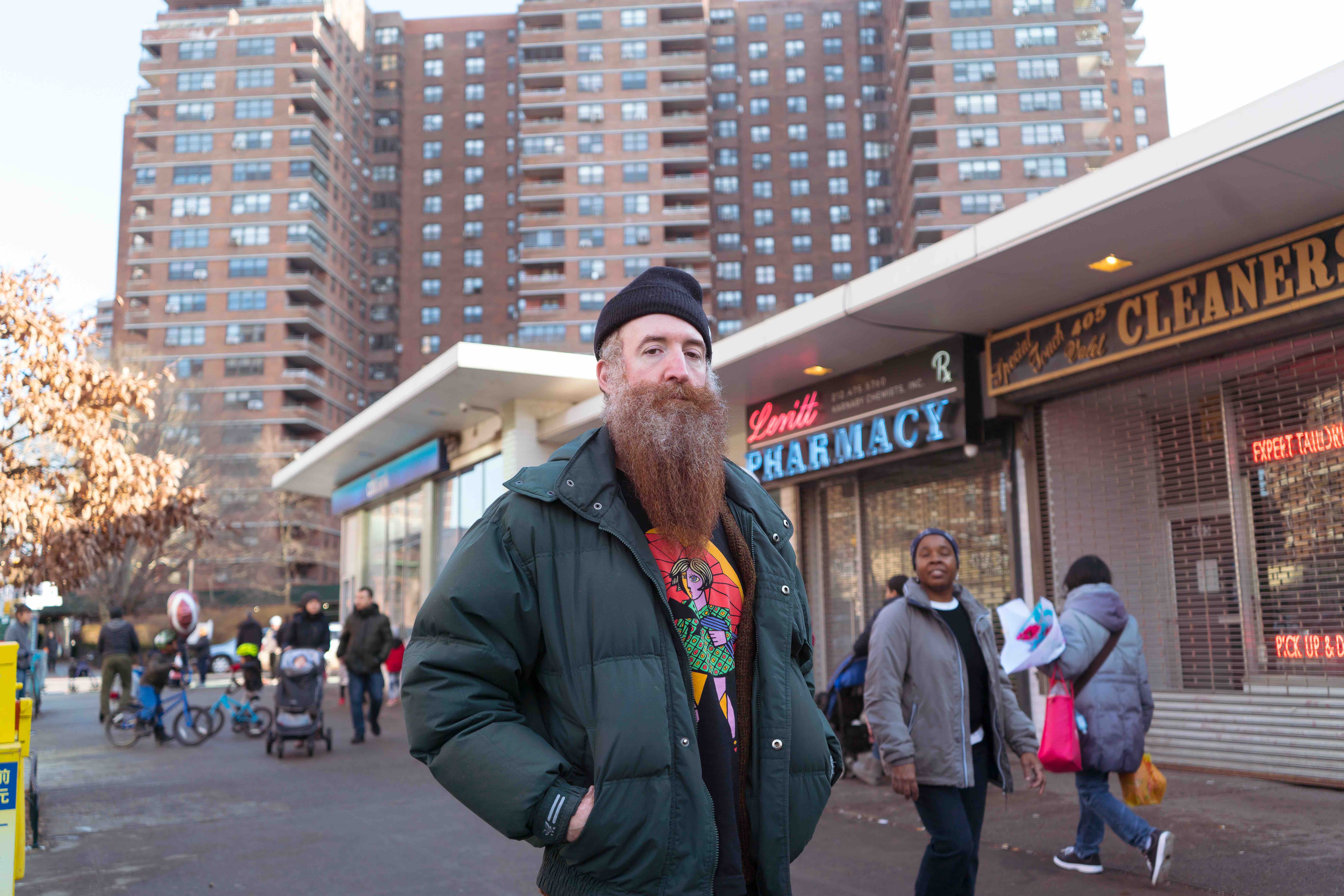 Linkedin
RELATED ARTICLES
OTHER ARTICLES
Photographer Becky Tyrell went down to the fading banger and stock raceway to meet a community desperate to keep it alive.
Photographer Sean Maung reflects on documenting a small town in Pennsylvania afflicted by high levels of unemployment, poverty, violence, crime, and addiction.
A new podcast is opening up the conversation between trans women and trans amorous men in the hope of building coalitions.
Filmmaker Laura Poitras discusses her new documentary which traces the remarkable life of the artist-activist and the impact of her battle against the US opioid crisis.
Theo McInnes’s photos of the annual event provide an intriguing snapshot of contemporary Britain.
A new film from Berghaus traces the story of Adam Raja, who left behind a turbulent upbringing to discover the healing power of climbing.