Art & Culture / Art behind bars: a portrait of the California prison system 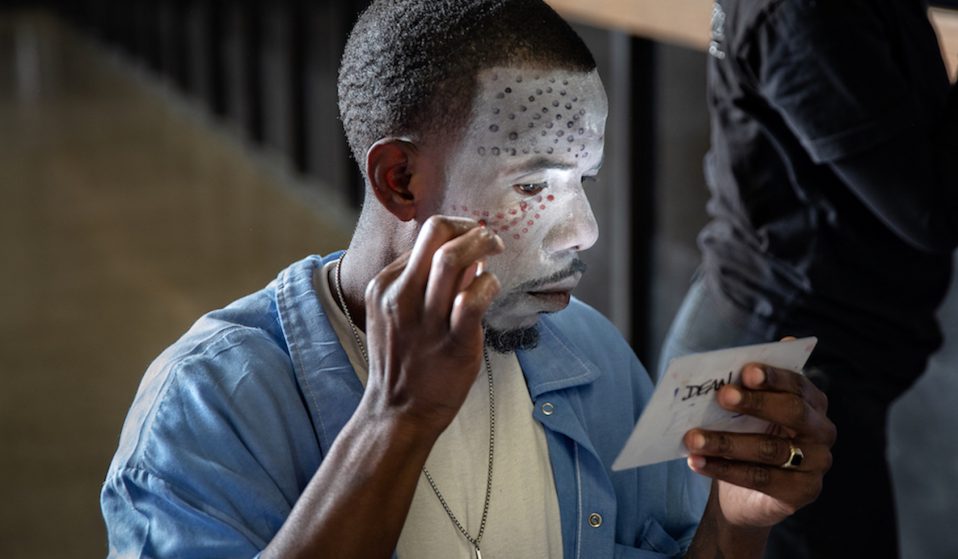 Photographer Peter Merts discusses his projecting documenting the importance of creativity for incarcerated people and his hope of changing public perceptions of prisoners.

In the late 1970s, photographer Peter Merts was one of nearly 500 youth who trespassed to protest the construction of a nuclear power plant on an earthquake fault. For this act of civil disobedience, Mert was arrested.

Merts spent 14 days in San Luis Obispo County jail, an experience that helped him to understand that “the folks inside – be they inmates or officers – were not that different from people on the outside, and that treating them with respect, consideration, and discretion would be appreciated and reciprocated”.

At that time, Merts began volunteering at Bread & Roses – a San Francisco Bay Area non-profit organisation providing free, live entertainment to institutionalised audiences. “I said to myself, ‘This is amazing; someone should document this!’” says Merts. “Within a week I bought a used Nikon.” 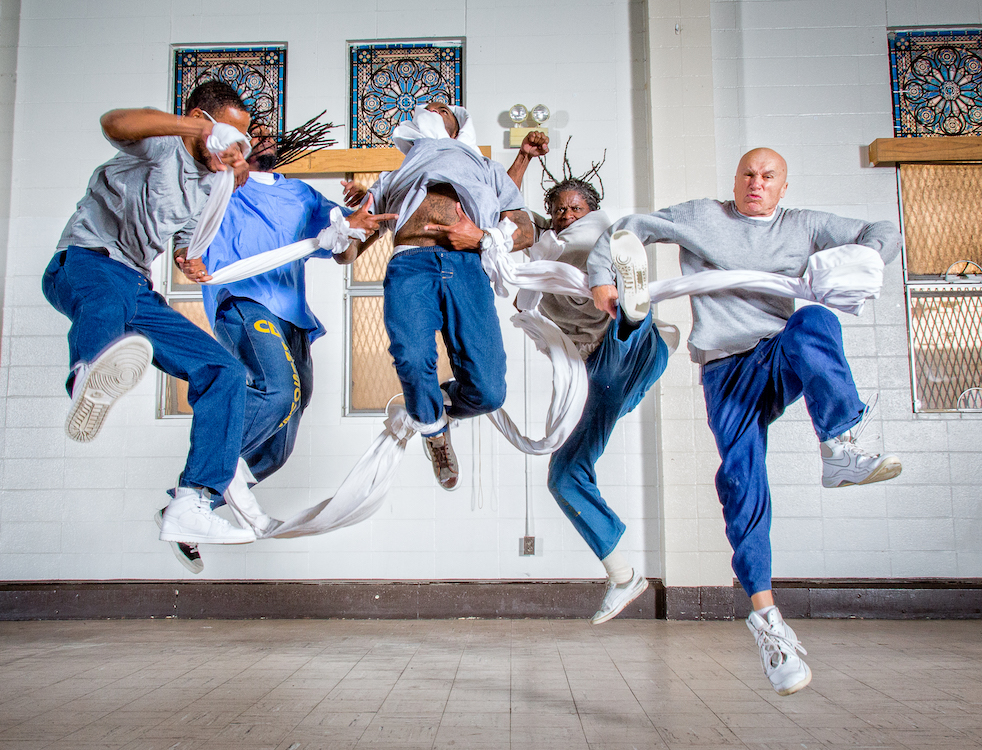 Students rehearse for a dance/spoken word piece, in the Protestant chapel at San Quentin State Prison, 2015

Over a period of 15 years, Merts would traverse California, documenting art classes in all 36 adult prisons. “Numerous studies, including those by Dr. Larry Brewster, with whom I published Paths of Discovery: Art Practice and Its Impact in California Prisons, show the efficacy of prison art programs,” Merts says, listing a host of psychological, behavioural, interpersonal, and intellectual benefits.

“More than one artist has described to me their art room as a ‘sanctuary’ from the harsh realities of prison,” says Merts. “The unwritten rules of the yard are relaxed in the art room as men and women teach, learn, mentor, and collaborate across racial and cultural divides.” 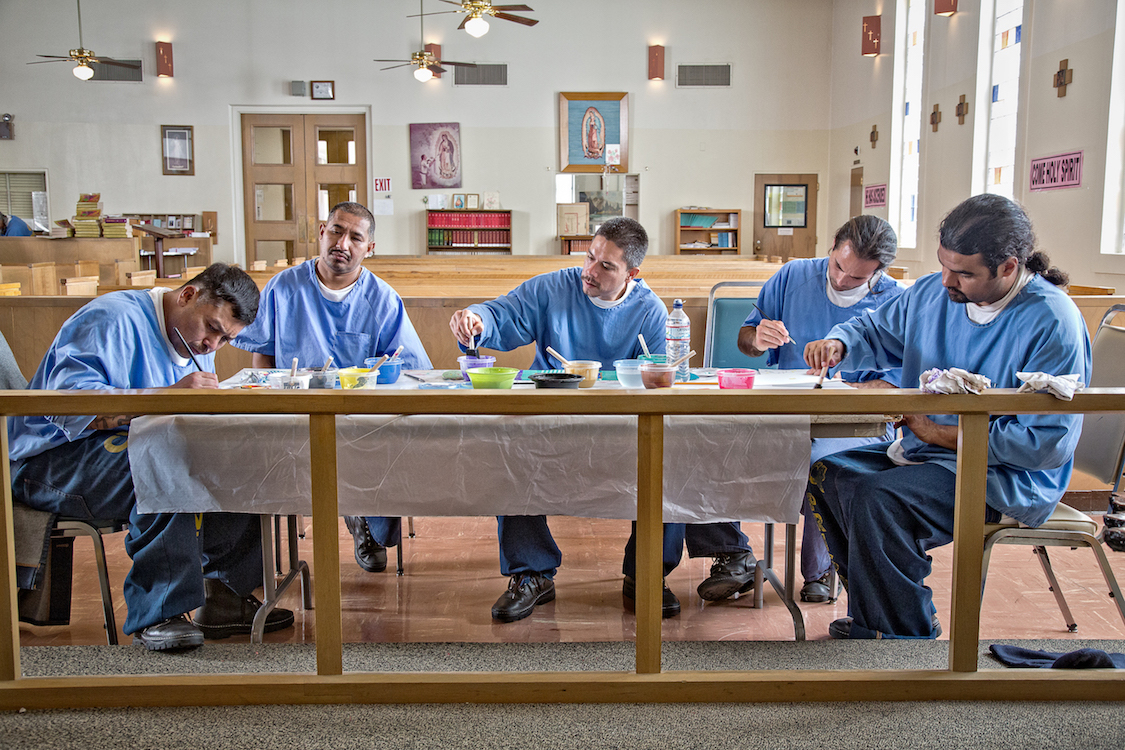 Painting students in the Catholic chapel at Sierra Conservation Center, 2016 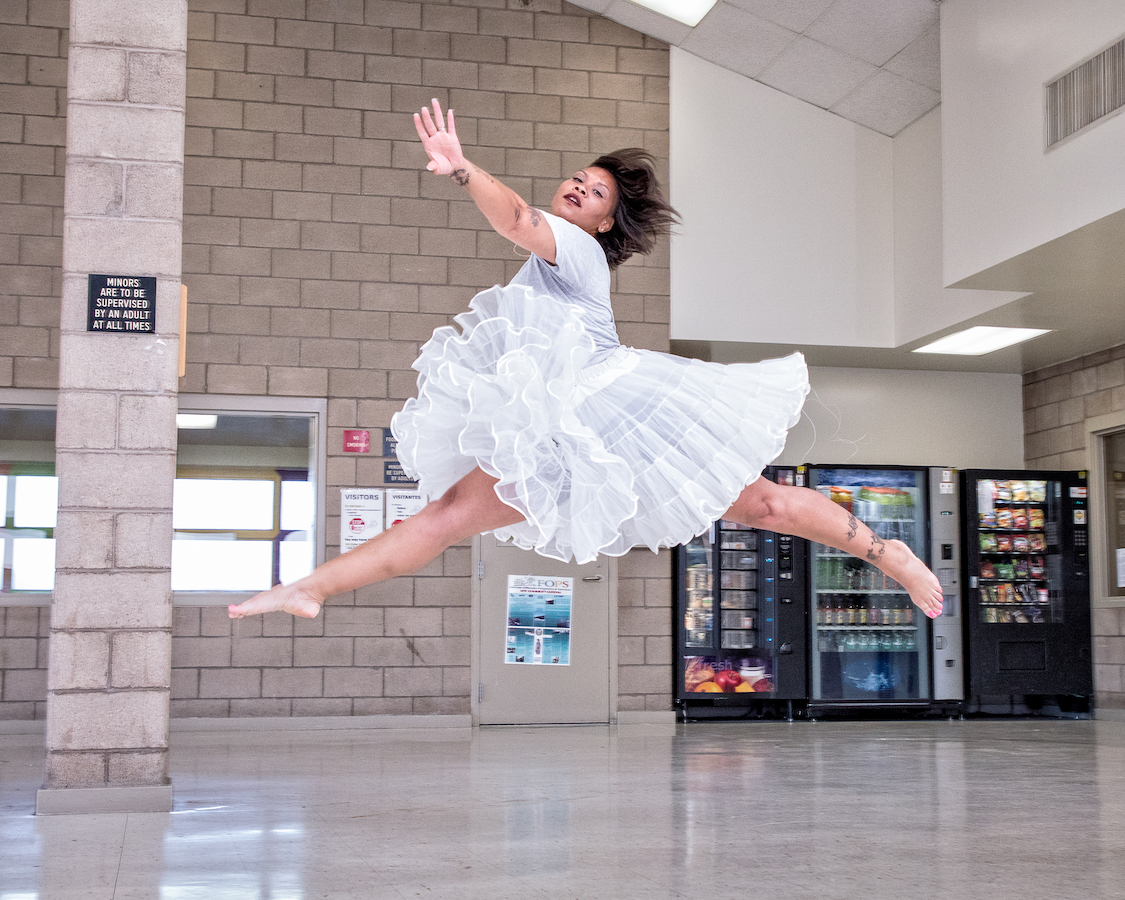 A dance student leaps in a visiting room, at Central California Women’s Facility, 2017

Merts shares the story of Adam – a young man incarcerated for murder – whose experience in a men’s prison group and art classes helped him develop and grow, giving him the strength necessary to finally leave a prison gang.

“When he subsequently fell into an intense identity crisis, it was these same programs that allowed Adam to re-create himself,” Merts says. “He took a prison job assisting a disabled fellow inmate, and later completed his high school diploma. Adam has recently been found suitable for parole by the board; he is now waiting for the governor’s signature.”

In addition to documenting the classes and the artwork itself, Merts makes portraits of prisoners, an empowering process that helps them rehabilitate their self-image. “There are no mirrors inside, due to security concerns,” he says. “Bathrooms have polished steel plates bolted to the wall that give a hazy, blurry, indistinct reflection. Consequently, some incarcerated people have not seen their own face clearly for decades.” 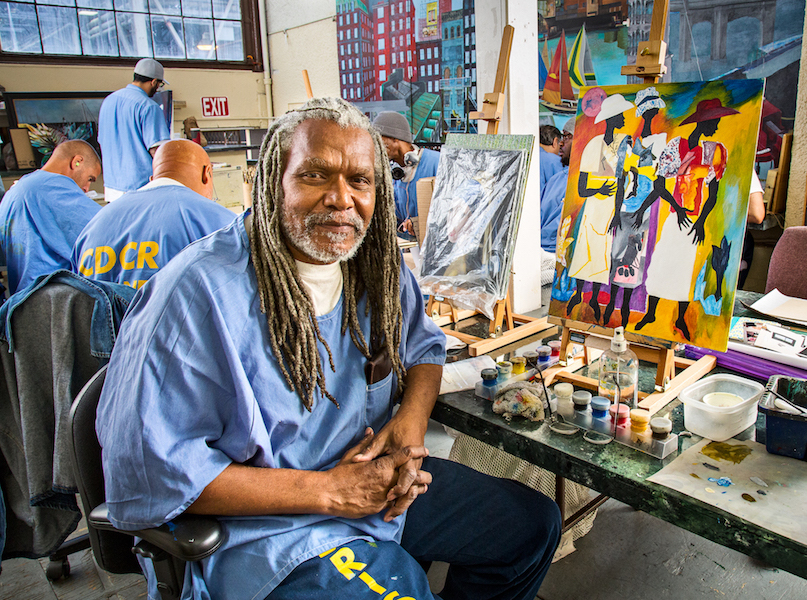 Student with his painting reproduction, in the art studio at San Quentin State Prison, 2015 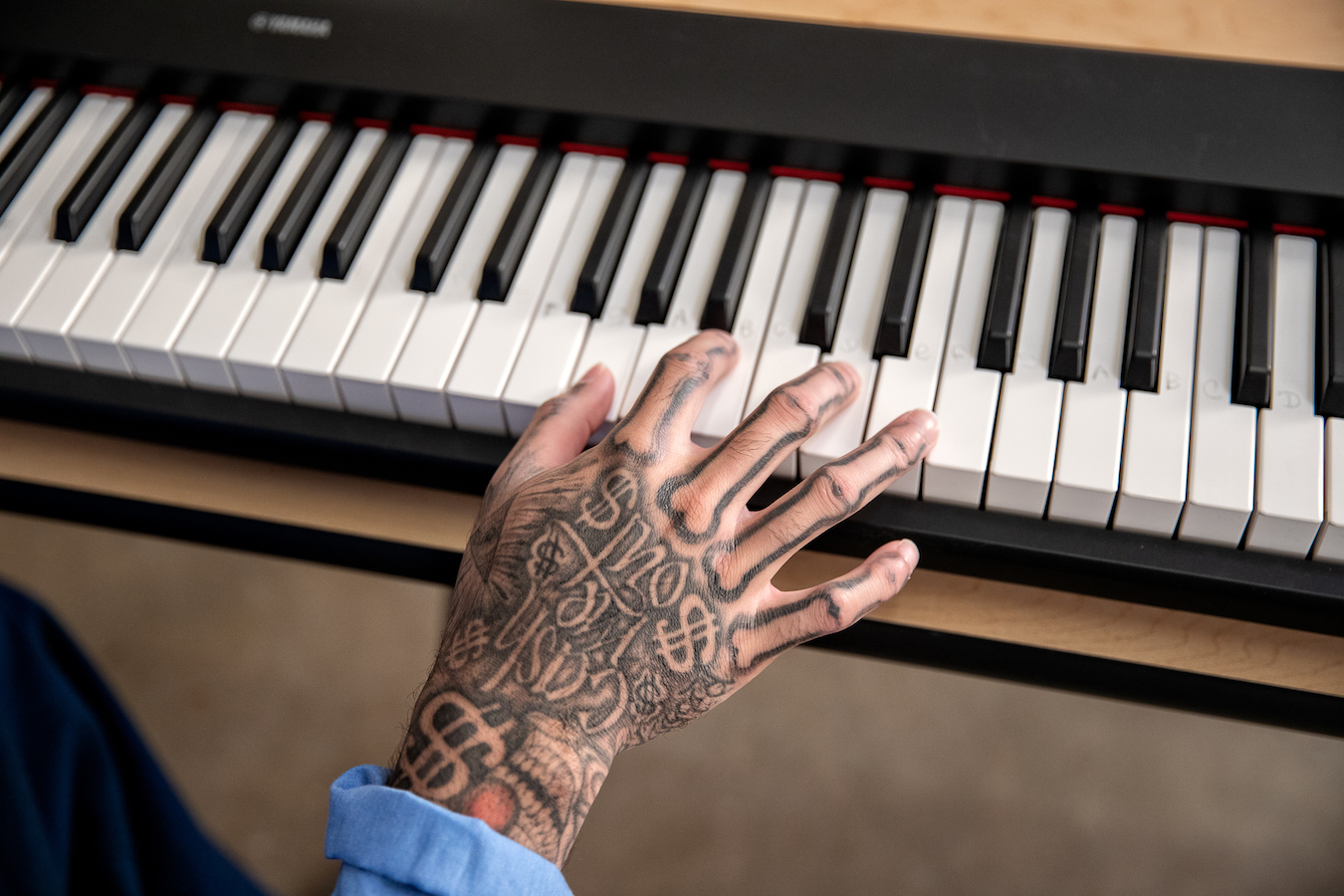 A songwriting student tries a melody, in a bare warehouse space at CCI Tehachapi, 2018

Merts’s work also helps to change public perception of prisoners – an image shaped by ‘copaganda’ promulgated by Hollywood and corporate media. “When I began showing these images, I received comments such as, ‘They don’t deserve art classes’ – suggesting that incarcerated people are undeserving, irredeemable, or unable to benefit from art,” says Merts.

“This is how I came to realise my most profound aspiration for this work: to illuminate the humanity and authenticity of these incarcerated artists. Only with empathy and compassion can we begin to correct some of the injustices of our justice and carceral systems.” 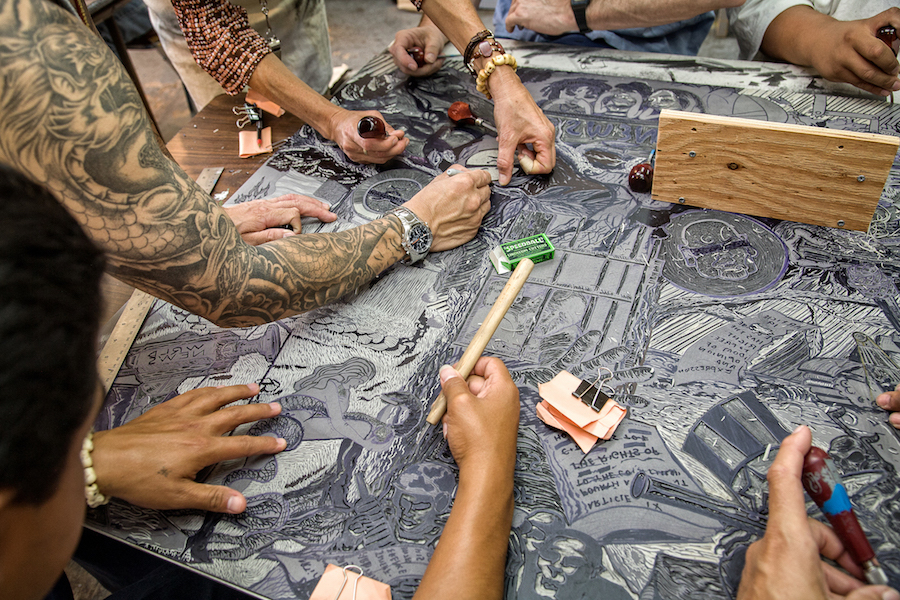 Carving a linoleum block for printing, in the art studio at San Quentin State Prison, 2008 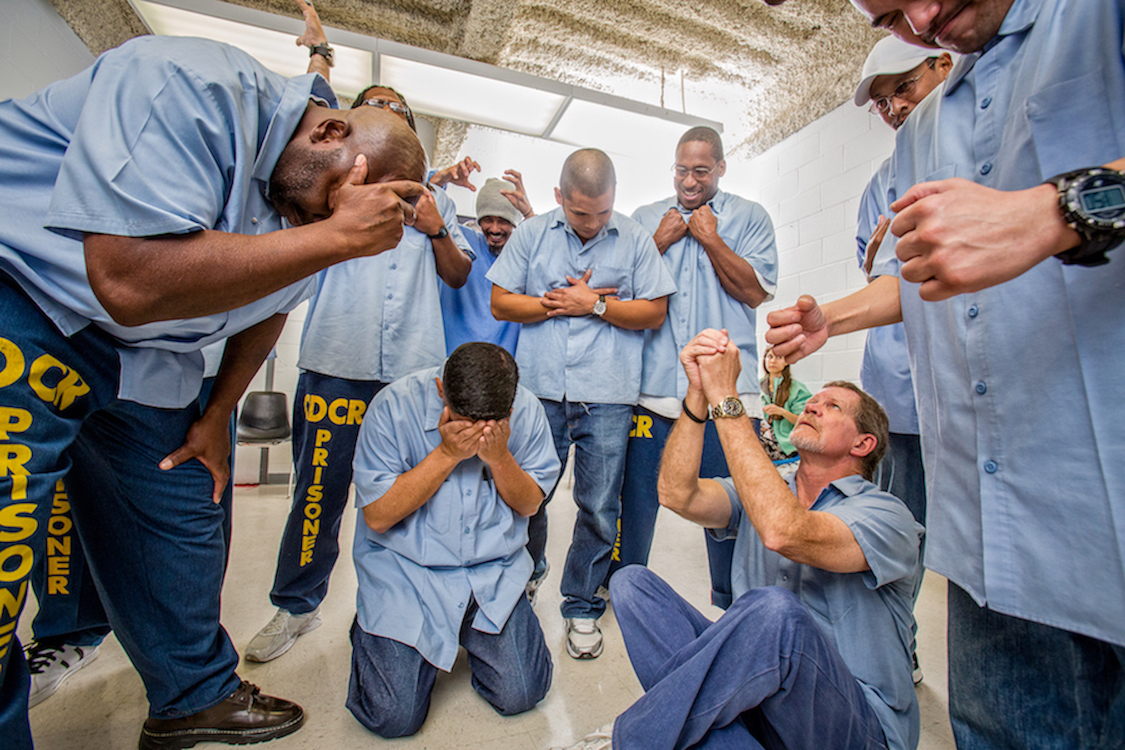 Students of Shakespearean theater warm up with an exercise, at Solano State Prison, 2015 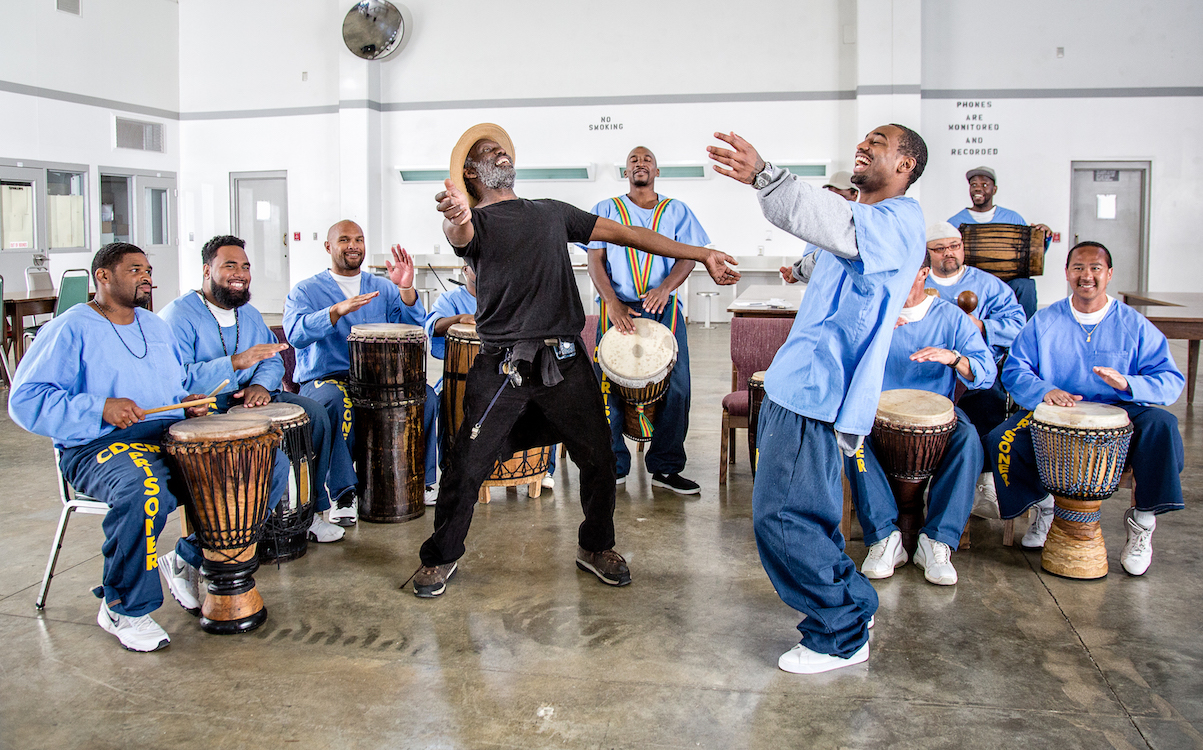 The instructor and a student dance during drumming class, in a gym at Salinas Valley State Prison, 2015 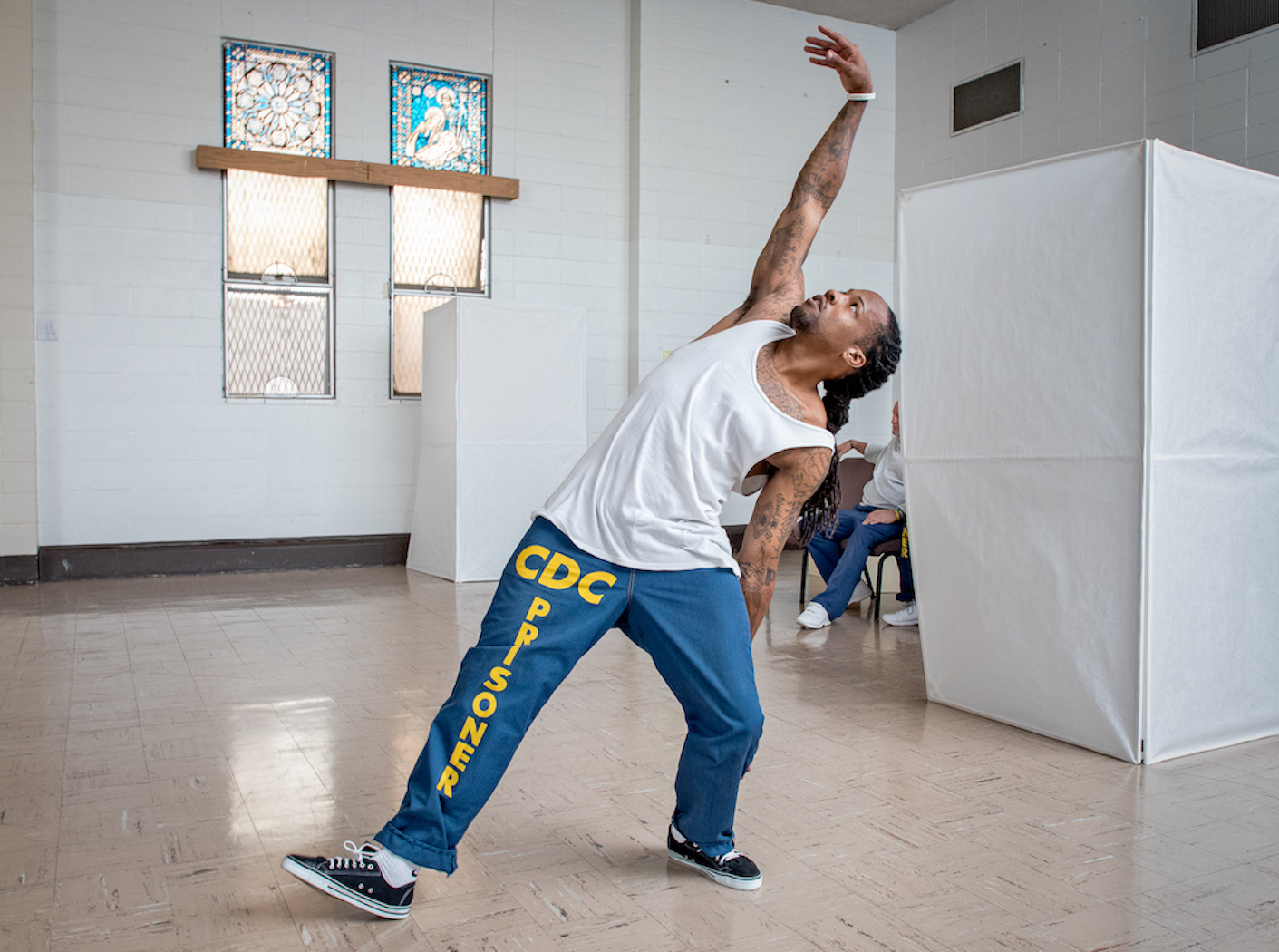 A student rehearses for a dance/spoken word performance, in the Protestant chapel at San Quentin State Prison, 2016 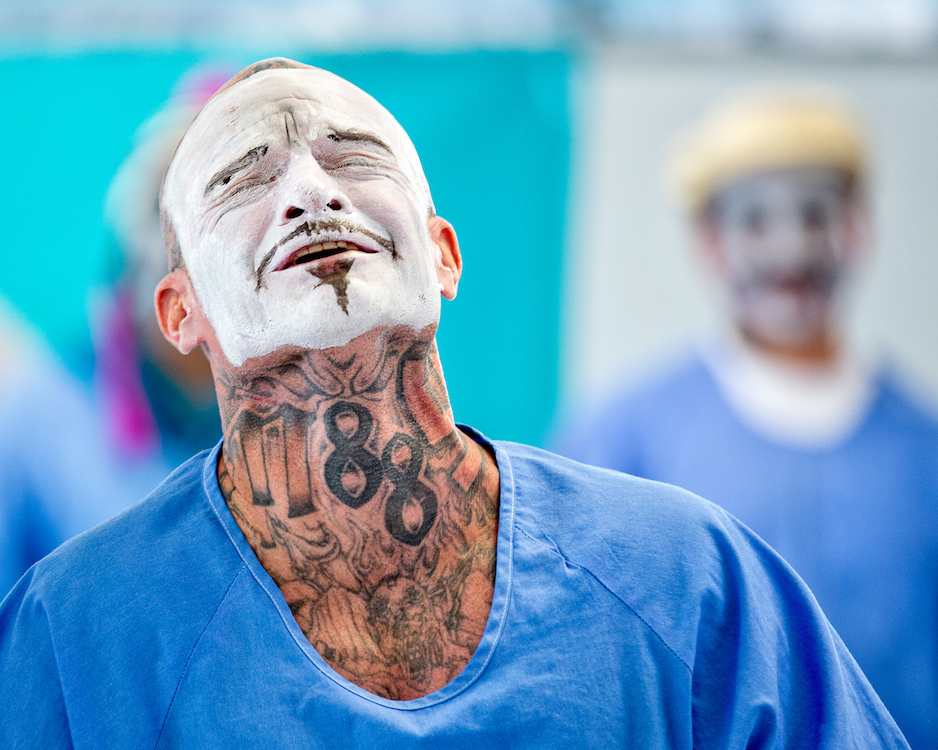 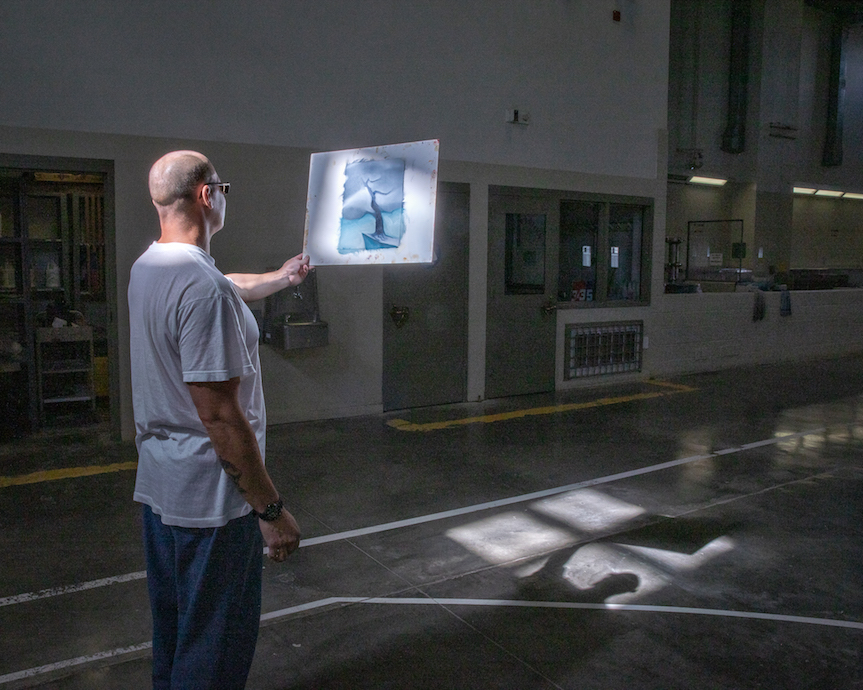 A student stops to inspect his painting in window light, in a gym at Pleasant Valley State Prison, 2019 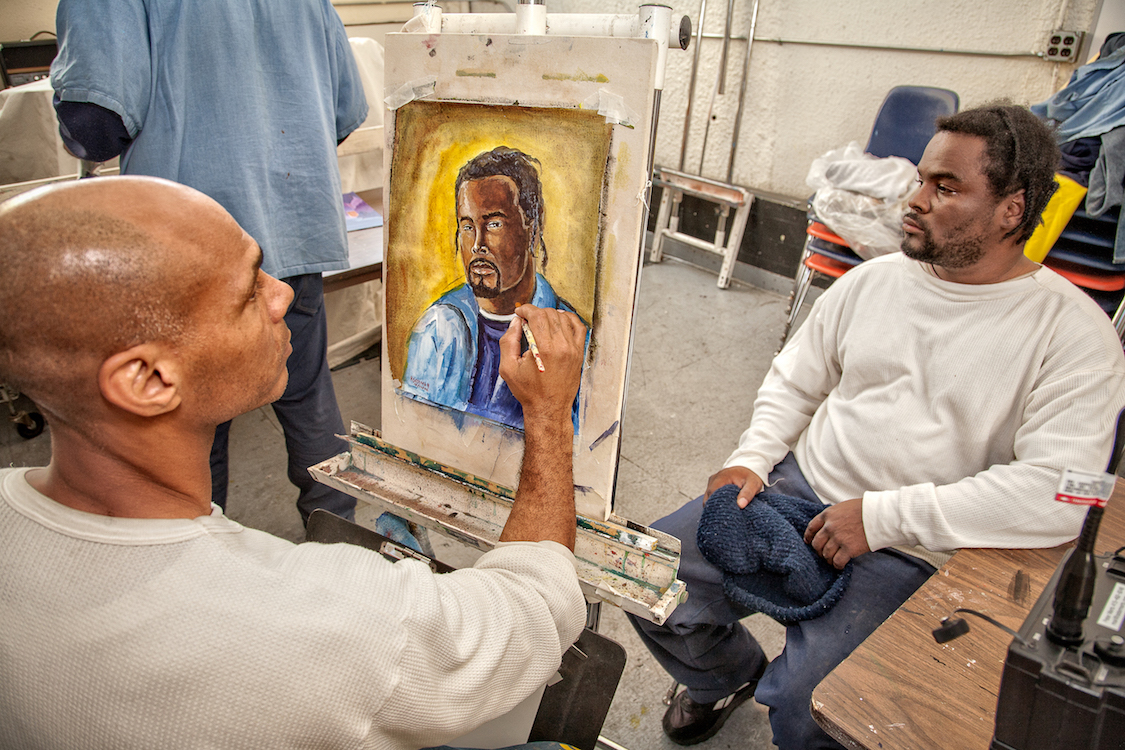 Ex Crucible: The Passion of Incarcerated Artists is out now on Daylight.

Linkedin
RELATED ARTICLES
OTHER ARTICLES
David 'Dee' Delgado’s photo project is about honouring and uplifting the city of his youth, and a world rapidly disappearing under the relentless onslaught of gentrification.
After fleeing the war in Ukraine, people are finding it impossible to secure affordable and decent housing in the UK.
A new law change is enabling Britain’s donor-conceived children to know the truth about their origins – but campaigners say the fertility industry must do more to protect people.
Activists and campaigners are fighting back against new laws that would seriously undermine the ability to take industrial action, calling it an attack on fundamental workers' rights.
From snake handlers to mardi-gras revellers, Tom “TBow” Bowden’s photos provide a snapshot of the wonderful and weird people who make up America.
The first-generation graffiti artist reflects on the tagging’s emergence as an art form and the players who pushed the medium forward.