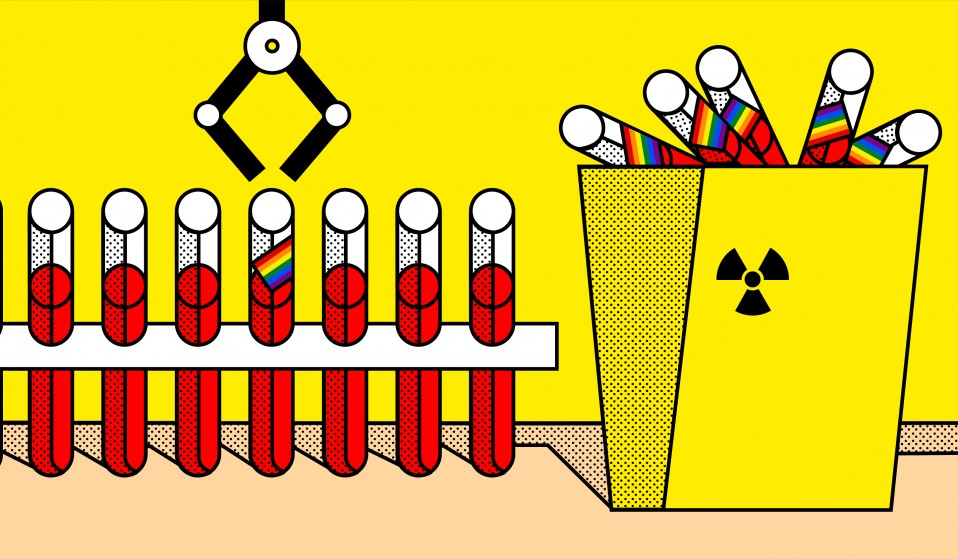 Banning sexually active gay men from giving blood leaves thousands of people stigmatised. And it doesn't have to be this way.

Banning sexually active gay men from giving blood leaves thousands of people stigmatised. And it doesn't have to be this way. Tom Rasmussen considers the alternatives to a discriminatory blanket ban.

The whole reason for a ban is to curtail the spread of HIV. The ‘tainted blood scandal’ of the 1970s and 80s saw nearly 5,000 haemophiliacs infected with Hepatitis B, and over 1,200 also infected with HIV during transfusion treatment. Hand-in-hand with increasing HIV infections in the UK, leading to a public health crisis, in 1983 a lifetime ban was put on all men who have sex with men, decreeing no blood would be accepted, ever.

In 2011 the picture looked a little bit better: with official legislation changes detailing a year-long deferral period whereby if you are an MSM but haven’t been sexually active in the last year at all, and are HIV, Hepatitis B, Hepatitis C, and syphilis free you are allowed to give blood. This sounds like an improvement on the former, but surely a yearlong ban is tantamount to a lifelong ban for most sexually active MSM?

The want to prevent the transmission of any disease is a completely rational practice, of course, but what the blanket ban comes down to is a mistrust in MSM rather than a focus on sexual behaviours applicable to everyone: because everyone is at risk of contracting any of these blood transmissible diseases too. The questionnaire at the donation booth does not care if you’re monogamous, or have had had a penis in your mouth for a second in an entire year — if you’re a man who has engaged sexually with a man you’re out, regardless of your sexual health status. If you’re a heterosexual — unless you’re a sex worker, or have a partner who is HIV positive — you’re pretty much in, regardless of your sexual behaviour. 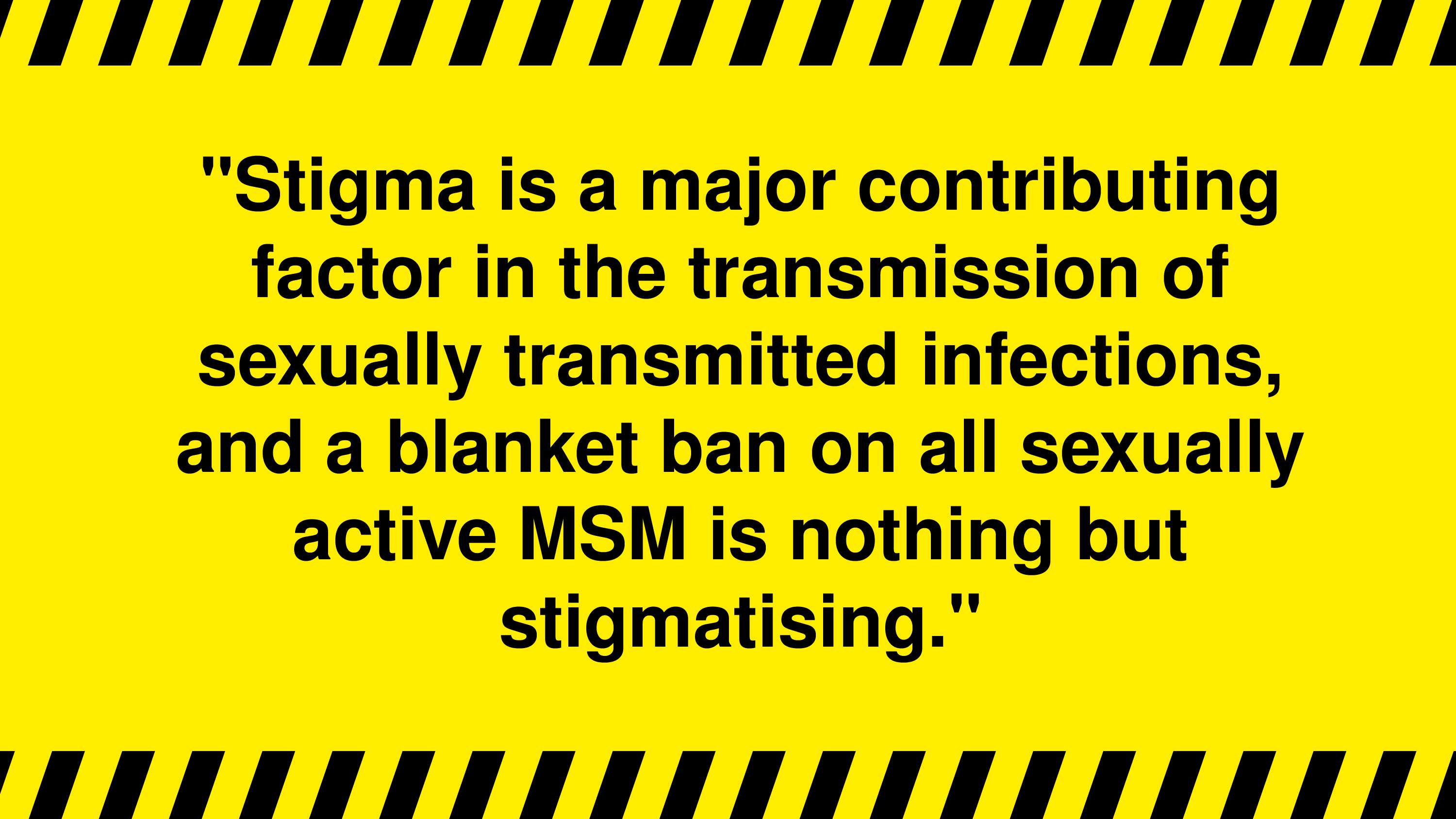 Ben Weil, a PhD student at UCL whose focus is on blood donation policy, told Huck: “When it comes to making public policy there’s an economy of lives that is considered. Who matters more? Who are we protecting when we are making the decision? What economy matters most? Is stigma as important an economy as preventing a haemophiliac from being transfused with infected blood during treatment? There’s economies of who matters most here.”

With a rigorous screening process in place for all blood that is donated, the likelihood of a contaminated sample slipping through the net stands currently at about 1 per 4.4million samples in the UK. The problem with the blanket ban on MSM blood donations is that it is so black and white. When the rhetoric around giving blood is centred upon it being ‘a privilege’ and ‘contributing to society as an upstanding citizen’, it leaves MSM and gay men feeling stigmatised, like their blood is second class, and like their sexual practices are infectious. Stigma is a major contributing factor in the transmission of sexually transmitted infections, and a blanket ban on all sexually active MSM is nothing but stigmatising.

“All blood is screened, and I feel like there is a solution somewhere,” Ben continues. “It’s okay if you want to have this ban in some form, but we could actually be more rigorous about how blood is tested. There’s a reluctance to invest more in that process, and it would be the easiest to say no. So again you come to a different economy: are gay men worth that sort of money?”

Looking back at the AIDS crisis and the nigh on decade-long struggle to access treatment in the States, the inability to access PrEP on the NHS today, the lack of funding for LGBTQIA+ education in schools, and the loss of endless HIV support services around the country in recent years it would appear that we are not.

The issue was recently thrust back under the microscope after the horrors of the massacre of 49 predominantly Latinex LGBTQIA+ people at Pulse night club in Orlando. Stories of MSM being turned away from their local donation centres in the critical aftermath were heartbreaking: when there is a deficit in blood donations in general, and a particular need for it in situations such as Orlando, why is there an unfairly unscalable hurdle barring MSM from donating their blood to help others?

“I was turned away, despite practising low-risk sexual behaviour due to the antiquated ban on donations from the theoretically ‘high-risk group’. I left with the uncomfortable feeling that my blood was considered impure for no good reason,” a friend explains over the phone.

The list of people who cannot donate is indeed very extensive, and MSM make up only one part — albeit a very large part — of that list. The inability to donate is perhaps not the issue in terms of the physical act, but the stigma this kind of ban perpetuates surrounding society’s judgement of gay sexual practices feels like yet another affront against MSM and homosexual men, who experience sustained and continued violences for the very same reason, from most angles, throughout their lives. The judgement of our sexual practices written into legislation only reifies the feeling of disapproval and difference for many.

Missing Type, Freedom to Donate and Blood Pact are all charities aiming to raise awareness of the unfairness of the blanket ban. Speaking to Madeleine Young from Blood Pact, she told Huck: “We were careful with the campaign not to call for one specific solution to the ban. What we want is for all available data to be reviewed by experts, in the hope that a more nuanced solution can be arrived at: one which doesn’t assume that MSM can be treated as a monolithic group. We believe the current ban helps perpetuate a damaging stereotype of gay men, so we’d like to see a different approach adopted. The ban is in recognition of an increased risk of MSM being carriers of undetected HIV, but it fails to recognise the enormous diversity among gay men, and the fact that all sexually active people of any orientation have some risk of exposure. What we want is for the ban to be reviewed in light of recent data and modern screening processes, in the hope that we can get to a place where a very diverse group of people isn’t excluded outright.”

It is true that HIV prevalence among MSM is higher than in most other sexual categories, but the blanket fails to recognise everyone’s risk: HIV affects more heterosexuals globally than it does MSM for example. Looking at the global picture it becomes apparent that there isn’t really a rulebook for following data and statistics across the board: in Portugal for example there is a higher prevalence of HIV among MSM than in the UK but there is no deferral year; whereas the figures for Norway are much lower for example, but there remains a lifetime ban on MSM donating their blood. The global situation, if anything, calls into question what methods are best for screening and what statistics are used to justify a ban.

The baseline of the discussion is about whether MSM are worth the time or the money, not whether a more nuanced blood donation system is possible: it is. The Department of Health announced on World Blood Donor Day, June 14th, that a review of the yearlong deferral scheme for MSM would take place, with no answers announced yet. We can only hope that the tide takes a turn.

Tom Rasmussen is a journalist based in London.

Linkedin
RELATED ARTICLES
OTHER ARTICLES
When a heterosexual, male journalist headed to the Olympic village and downloaded Grindr - a gay hook-up app - for a story this week, he put the lives of athletes, and our community's security at risk.
In 2012, Huck caught up with Tim Von Werne, whose career was cut short under a veil of ‘controversy’, to find out why there's so few openly gay skaters.
Photographer Mads Nissen reveals how an image captured inside a Russian nightclub became a symbol of self-expression.
Director Jake Witzenfeld and Naeem Jiryes talk about documentary Oriented, which explores the complex identities and battles for recognition of gay Palestinians living in Israel.
Guy Henry Mueller is channelling the countercultural roots of California’s drag scene to flip perceptions. But guess what? He’s not gay.
Romas Zabarauskas is using cinema to fight for LGBT rights and against prejudice.