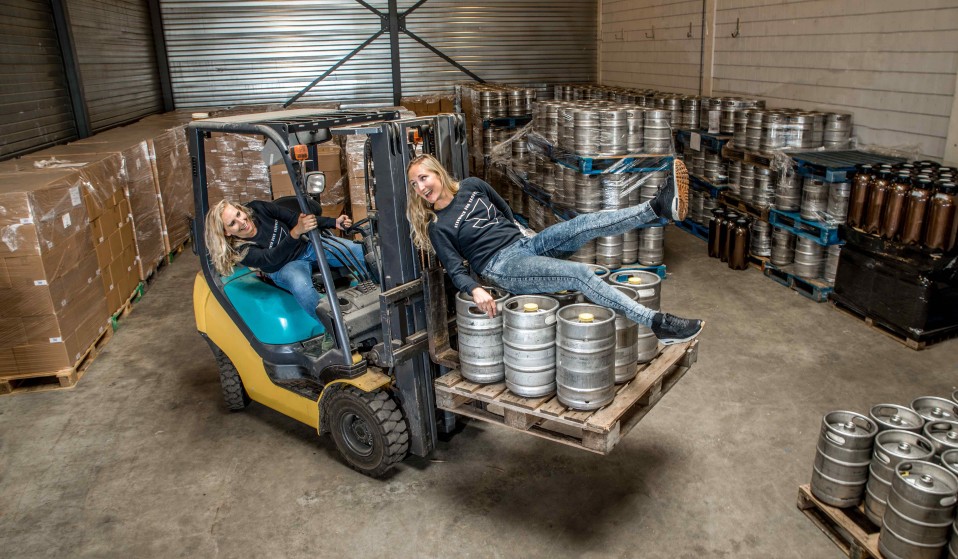 After learning to brew beer as a hobby, sisters Do and Tessel de Heij honed their skills to launch Gebrouwen door Vrouwen – Amsterdam’s first all-woman brewery. Here’s how they did it.

After learning to brew beer as a hobby, sisters Do and Tessel de Heij honed their skills to launch Gebrouwen door Vrouwen – Amsterdam’s first all-woman brewery. Here’s how they did it.

It was back in 2013, while working at an Amsterdam tech start-up, that Do de Heij realised her passion for brewing. There, every Friday afternoon, she would see a colleague from the US bring bottles of his home-brew to the office to share among co-workers. “‘This was before you could buy home brewing kits at supermarkets,” she remembers. “So, I went to this big store in Almere where they sell Breaking Bad style fermentation tanks, and spent €200 on equipment.”

Eventually, Do’s younger sister Tessel – who worked in retail – joined her DIY operation, and the pair began to hone their skills, brewing batches of beer for friends, family and their own parties.

But it was only when nursing hangovers from their own beers on New Year’s Day 2015 that they decided to launch Gebrouwen door Vrouwen. “It means brewed by women,” Do tells Huck. “We chose the name because it rhymes in Dutch and explains exactly what we are doing. Even though friends working in marketing told us it was too long, we stuck with it. We had other names, but they seemed artificial.”

Rather than buying their own facilities, Do and Tessel rented out tanks at another brewery. At first, they wanted to make 200 litres – but when they were offered space for 1000, they took the opportunity and ran with it. “We had to pay everything in advance,” Tessel says.“We spent all of our vacation money on brewing that year.”

Luckily, the investment paid off – and within 12 months the pair left their jobs to brew full-time.

So far, Gebrouwen door Vrouwen has released seven lines of beer that are available throughout the Netherlands and Belgium. Their recipes often involve somewhat surprising ingredients, such as juniper berries or elderflower, which are added to classic beers to enhance their flavours.

Though they are eager to expand their business, Do and Tessel still want to keep Gebrouwen door Vrouwen relatively small-scale, partly to preserve the company’s grassroots, female-led ethic. “We really want to launch a brewpub in Amsterdam,” Do explains. “A place where people can try our beers and hang out. We’re looking for somewhere with a big terrace, that is small enough for us to run ourselves.”

HOW TO START YOUR OWN BREWING COMPANY

“Starting any business is tough and it’s even harder when you’re working alone. So find someone you can rely on – preferably your sister. In the beginning, things don’t always work and it’s really rewarding to learn from those experiences with someone else. You also get to celebrate everything together and when you want to step back for a little while, your partner is there to take over.” 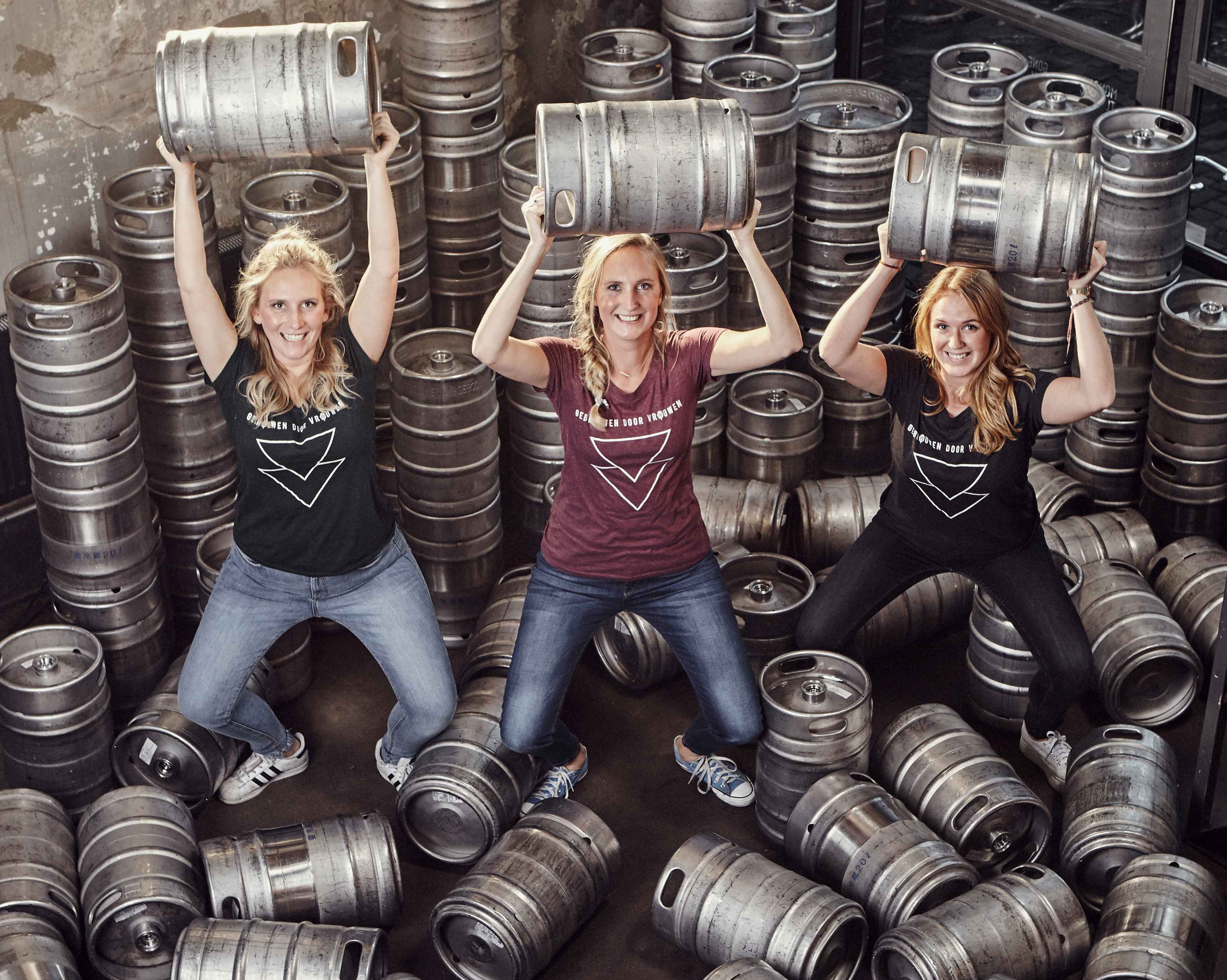 “Start brewing at home and drink a lot of beer to figure out what you like. Keep brewing and experimenting until you find something that you would drink all the time. You have to be 100 per cent behind your beer and behind your recipe, otherwise it’s almost impossible to sell it. Don’t take criticism too seriously. We learnt very quickly that you can’t make everyone happy.  There’s always someone that doesn’t like your beer, so you have to like it yourself.”

“Brewing takes time and you have to pay your suppliers before paying yourself. In the beginning, we worked almost an entire year at other companies and didn’t rely on brewing for money. You really need to plan that first year carefully and either keep your day job or save enough money to survive without a stable income. Beer takes at least two months to brew, then sell, and in the meantime, you still have to your pay bills.”

DO IT FOR THE BEER, NOT THE MONEY

“This applies to any new company really. Before you start, make sure you actually enjoy what you’re doing. If you like your work, it will give you energy. It almost becomes natural and you’ll happily keep going after business hours or at the weekend. But if you’re just there for the money, it probably won’t work.”

“Although we don’t really have a marketing strategy, we have printed sweaters with our logo. Friends tell us that people constantly ask them about the brewery when they wear the sweaters. So, if you want some affordable, ‘underground’ marketing for your new brewery, make some branded clothing.”

Learn more about Gebrouwen door Vrouwen on their official website.

Linkedin
RELATED ARTICLES
OTHER ARTICLES
With inflation now at a 40-year-high of 9 per cent, demonstrations organised by TUC took place to demand action from the government.
In the wake of the decision by the supreme court to overturn Roe v Wade, thousands of protestors filled the streets to express their rage and anguish.
The author discusses the all-consuming nature of heartbreak, and turning the experience into an incisive exploration of love and loss.
Whether it's partygate, the climate crisis or the spiralling cost of living, the fightback begins on the picket lines writes Tommy Vickerstaff
LGBTQ+ students are keeping the spirit of the original Pride alive by fighting for liberation for everyone, not just their community.
Photographer David Hoffman recalls documenting the extreme wealth inequality around Tower Hamlets and Hackney int the 1980s.