Art & Culture / What might happen if U.S. voters don’t feel the Bern? 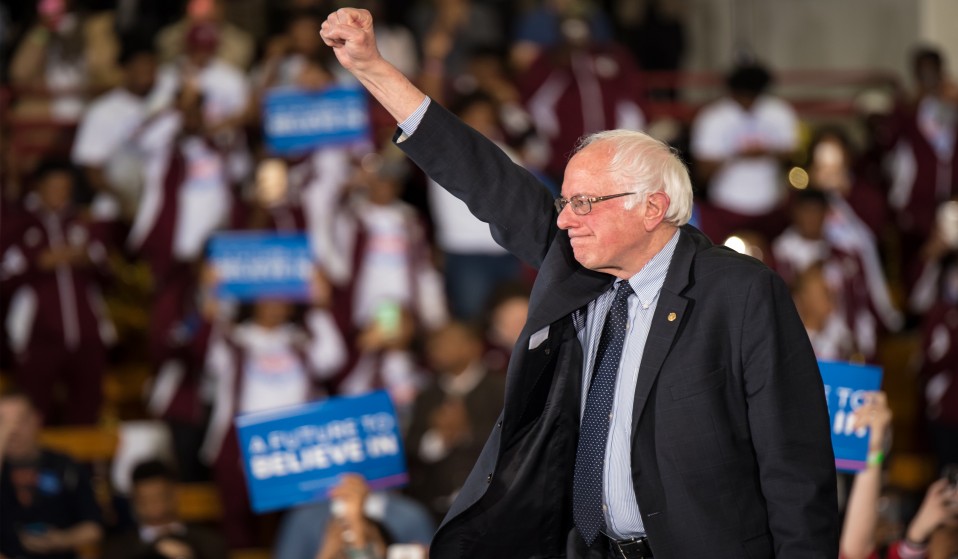 What if Clinton beats Sanders to the Democratic nomination?

With Super Tuesday 2 about to kick off, we speak to Sanders supporters about their thoughts on the campaign trail, and what might happen if Clinton beats him to the Democratic nomination post.

Whether or not you consider the Bernie campaign to be an actual political revolution, there’s no denying his vision has galvanised young people around progressive, leftist principles in a way not seen here in the U.S. since the 1970s. Having been politically active in the seventies himself, Bernie is bringing an old-school grassroots style of politics to a generation of social media ‘clicktivists’, and the results have been contagious.

Millennials are starting to imagine more for themselves than what lies within the constraints of vested corporate interests, a result of years of disillusionment and malcontent. Who can blame us, when we’re continually told we’re going to be worse off than our parents, the impending doom of climate change remains ever present, and the internet provides us with an unparalleled insight to the grim reality of what global capitalism means for those previously hidden from view? Bernie’s campaign has become a vehicle for these ideals – largely because he is not accepting the financial stranglehold of big business sponsorship. But what is to come of all of this leftist energy in the coming months and years, should his campaign be unsuccessful? I spoke to five of Bernie’s supporters, ranging from campaigners to average twenty-somethings, to find out what’s in store.

First up, despite the mainstream media’s portrayal of his campaign as doomed, and a distinct lack of coverage of his platform, Bernie’s supporters remain optimistic about his chances of winning the Democratic nomination. “The enthusiasm of Bernie’s message is spreading quickly even with the mainstream media blackout”, say Carolanne Fry, from the Portland for Bernie campaign. “Every day more people hear and learn about him and he gains more followers.”

Josh Hanselman, a Bernie campaigner from Atlanta, highlights the difference in the delegate count when considering pledged delegates and superdelegates, a distinction the mainstream media fail to address. Pledged delegates can’t change who they’re backing, their votes are set. Superdelegates on the other hand can change their pledges once the primaries reveal the popular vote.

Media outlets often lump these two types of delegates together in their reporting, playing into the hands of the Clinton campaign, which has amassed an impressive army of superdelegates. But it should be noted that a similar picture was painted in the beginning of 2008, where Clinton also held a superdelegate lead against her then rival Obama. Those positions changed once the primary votes rolled into his favour, leading him to victory.

Right now, with superdelegates taken out of the equation, the real delegate count sits as 768 to 554; Bernie is only down by 214. It’s well worth noting that Clinton has done well in the South, but as Aaron Thorpe from the Atlanta campaign points out, aside from Florida she’s now all out of Southern states. 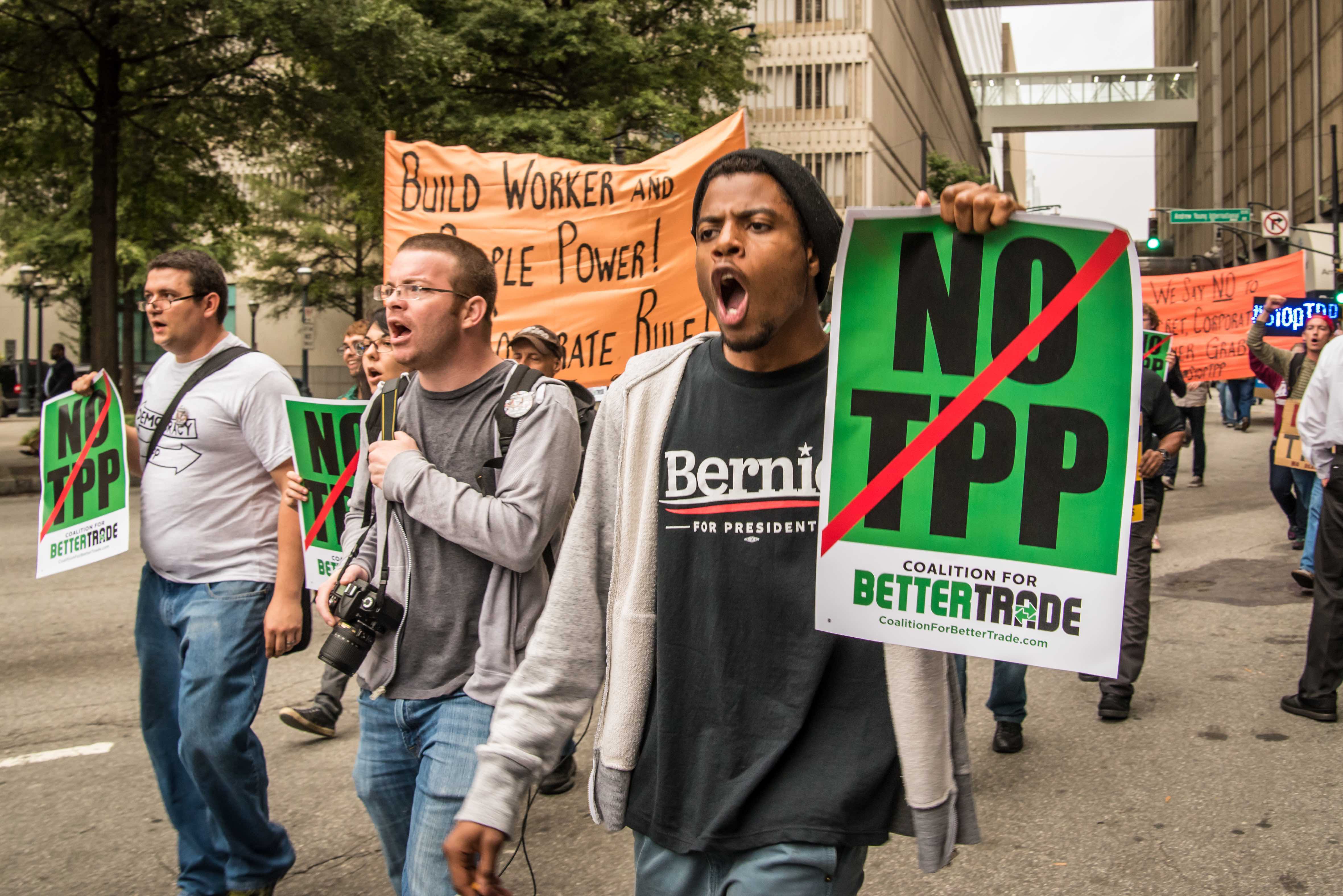 The rest of the country is still up for grabs, and Bernie seems to be holding his own in other regions across the U.S.A. Super Tuesday 2 will reveal if he’s up to the challenge. His recent surprise win in Michigan is a case and point, revealing his ability to appeal to a more diverse demographic than his critics would lead you to believe is possible. Marion Tanis, a Bernie supporter from New York, emphasises that a Clinton nomination is not the inevitable self-fulfilling prophesy of mainstream media, regardless of what CNN might want you to think.

The gap between Clinton closes even further when comparing actual votes that have been casted in the primaries, her narrowing lead is just 53% to 44%. It’s a tighter than many would have you think.

Despite Bernie’s successes, a Clinton nomination still remains likely; his waves of support may well not be enough to carry him to victory. What then might then happen to the momentum and excitement for progressive policies that’s bubbling from his camp? Will this leftist political energy fizzle out, or erupt in the event of a Trump – Clinton race? And what form might that take?

Last week, a Wall Street Journal/NBC poll revealed that 33% of Sanders supporters would not vote for Clinton in a general election. Of the five Bernie supporters I spoke to, only two could see themselves supporting Clinton in a presidential race. Deena Kablaoui, of Tennessee, said she would definitely back Hillary and even put energy into her campaign in order to prevent a Republican presidency – especially if the stakes are as high as a Donald Trump opposition.

The rest of the Bernie base I spoke to were less keen on Hilary, reflecting the sentiment of the popular “Bernie or Bust” social media campaign that’s encouraging voters to write Bernie’s name onto the ballot should Clinton get the nomination. “Hillary is not inspiring the same voters that Obama inspired,” argues Marion Tanis from NYC. “Obama sparked this revolutionary appetite and now we are carrying it to the next level eight years later with Bernie.” Tanis couldn’t see an easy transition for Bernie supporters to back a business as usual Clinton candidacy.

Carolanne Fry from Portland takes an even stronger stance against Clinton. “Young people will be very, very angry if Clinton gets the nomination. We feel like we are a slighted generation, left to clean up the multiple messes (environmental, financial) that previous generations have created for us.” For her and many others, a Clinton premiership would just be more of the same. 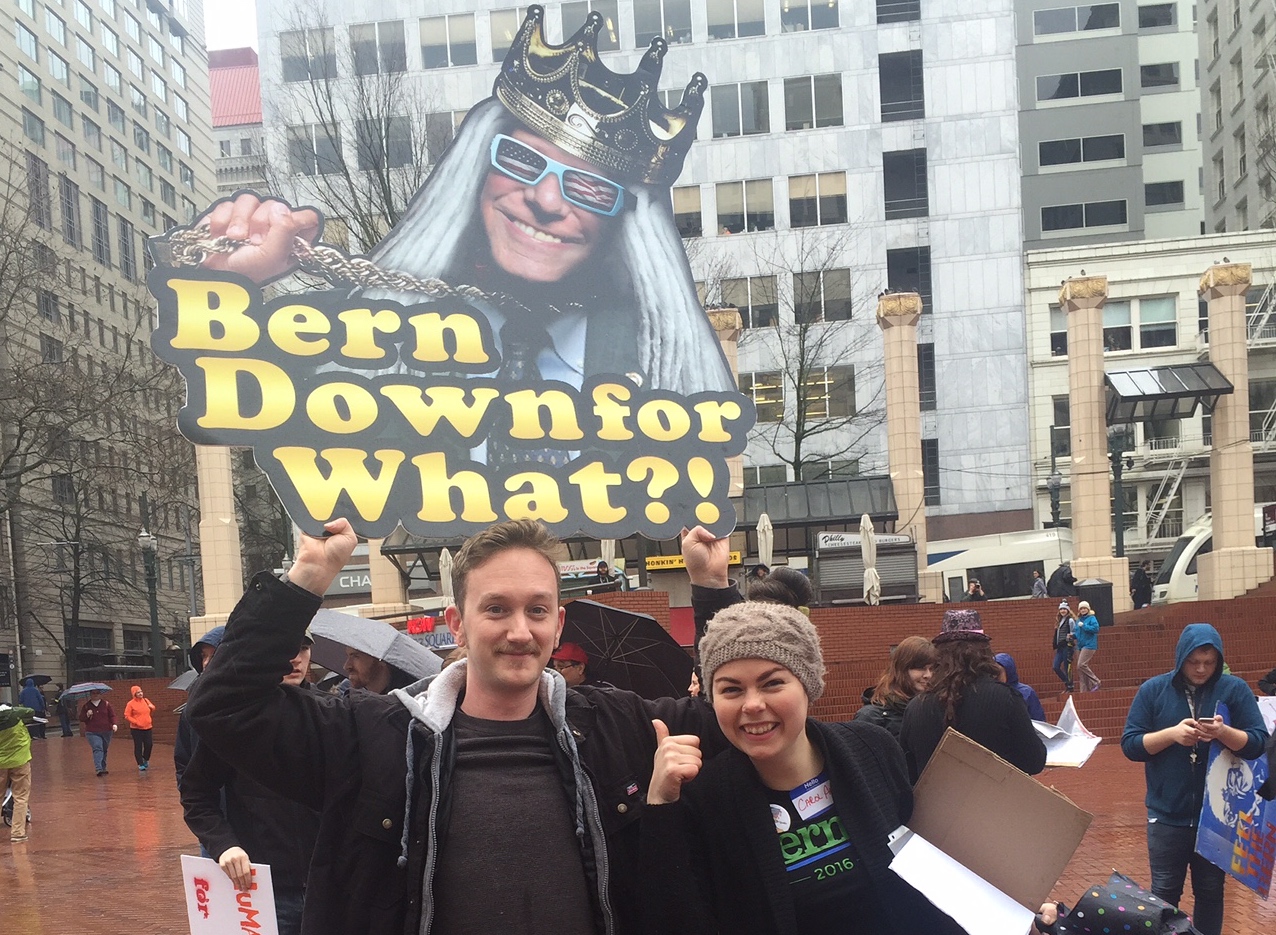 The Sanders supporters I spoke to seemed unsure of what might happen if voters just didn’t feel the Bern. With primary season still consuming time and resources, plans to harness the energy of this campaign into a broader political movement beyond the confines of electoral politics are notably absent. Sure, it’s still too early in the game to know exactly what might come to fruition, but you’d think there’d be plans brewing.

This seems strange, considering it was the Occupy Wall Street movement that brought economic inequality to the forefront of U.S. politics, popularised the use of the term “percenters” and ultimately laid the foundation for the success of Bernie’s campaign. I can’t help but feel they’re missing a trick, social change doesn’t just come from government – something Bernie himself knows only too well.

While plans for a movement might not yet be on the cards, activists are thinking about the future. Josh Hanselman, like the majority of those I interviewed, is certain that whether Bernie wins or loses, pressure for campaign finance reform must continue. ‘Not because it’s more important than any other issue in a vacuum”, says Hanselman, “but because nothing else we demand can possibly become policy until we remove the incentive for politicians to prioritise corporate welfare above the general welfare of citizens.”

The importance of electing progressive candidates at a local level was also a recurring response, “because that’s where it all starts”, according to Atlanta’s Aaron Thorpe.

A recent poll by NBC News/Wall Street Journal found that 7% of Sanders voters said they could see themselves supporting Trump, a view not shared by those from across the U.S. I spoke to. No one entertained the idea of rooting for a Trump or Cruz presidency to create a backlash environment for Bernie’s ideals to eventually make an even stronger comeback, although most were reluctant to admit that they would put any amount of energy into a Clinton campaign either.

The hope, it seems, of Bernie supporters, is that by remaining staunchly to the left of Hillary, they will be able bring her to them when she needs them most; in the event that she becomes the Democratic nominee. Perhaps more importantly, they will play a crucial in holding her to account, especially for the promises she makes after appealing directly to the Bernie platform.

Ultimately, Bernie supporters know that the road ahead is a long one, but they also know that his baseline ideology of equality won’t be dropping off the agenda any time soon. Those who I spoke to were confidant that, unlike the Obama campaign, theirs is about issues that affect millions of Americans, not just personality. “The enthusiasm of his followers cannot be understated”, Carolanne Frythe tells me. “Grassroots volunteers know the battle in which we are fighting and we fight harder every day. The kind of dedication it takes to flip states in weeks will not go away lightly.”