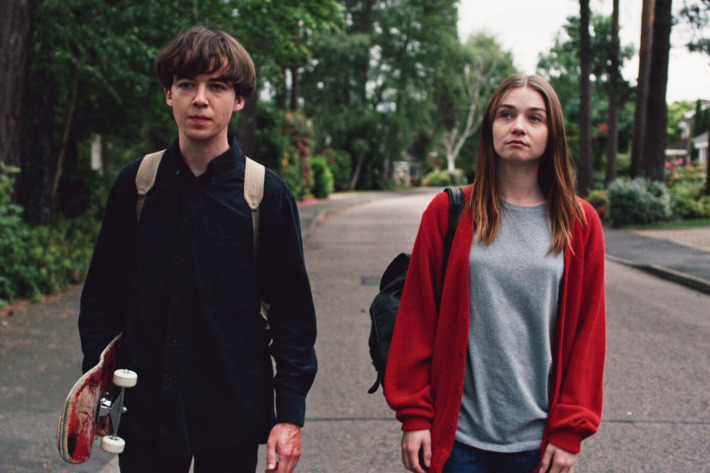 The storyteller behind the acclaimed graphic novel – now a hit Netflix series – talks inspiration, writer’s block and why he always finds himself coming back to narrating the perils of adolescence.

The storyteller behind the acclaimed graphic novel – now a hit Netflix series – talks inspiration, writer’s block and why he always finds himself coming back to narrating the perils of adolescence.

It’s been quite the few months for Charles Forsman.

In October 2017, the Netflix adaptation of his first graphic novel finally hit screens. Clocking in with a total of eight episodes at around 20 minutes each, the series charmed and beguiled audiences with its bizarre and violent portrayal of love, loneliness and teenage dread.

The show was The End of The F***ing World – and it was a smash. The Atlantic called it “pitch-black perfection”, while Mashable christened it as “the Bonnie and Clyde of our generation.” Type its title into Rotten Tomatoes, and you’ll be met with an unseasonably fresh score of 98 per cent.

“Yeah… I guess the reaction has been overwhelmingly good,” Forsman admits, chuckling. “I mean, it’s a miracle that it ever got made. And it’s an even bigger miracle that it’s so enjoyable to watch. It’s fantastic.” 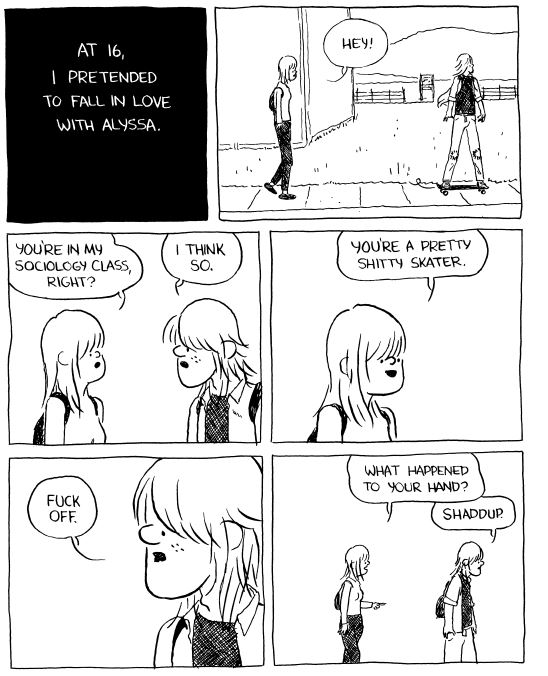 He’s certainly not exaggerating when he refers to the show’s existence something of a wonder. Its story – the journey of James, a 17-year-old contending with psychopathic tendencies, and Alyssa, his bratty, rebellious classmate – is candid in its depiction of murder and mutilation, setting it apart in its status as a coming-of-age romance.

It’s unashamedly strange, too. Each line is delivered like the strained punchline of a deadpan joke, while the setting – a sprawling non-location in faceless suburban England, as opposed to its US equivalent in the original book – means that it’s more Robinson In Ruins than it is True Romance. And all the better for it.

Forsman, a graduate of The Centre for Cartoon studies who resides in Western Massachusetts, first began working on the book back in 2011, having just finished a lengthy project. Titled Celebrated Summer, the graphic novella, with its detailed crosshatch pages, had taken him a considerable amount of time to complete. He was burnt out.

“It was pretty intensive, so I was kind of reeling from finishing that, trying to figure what I wanted to do,” he recalls. “I think I had writers block, in a sense. I was worrying too much about making something great and wasn’t letting myself have fun.”

“My best friend Max, a cartoonist in Belgium, he had started this mini-comic called Moose and he was selling them for a dollar. They were really quick reads, but they were really affecting. I thought, ‘maybe this is a cool template’, something to get me out of my rut I found myself in. So, I just sorta just started with a sketch.” 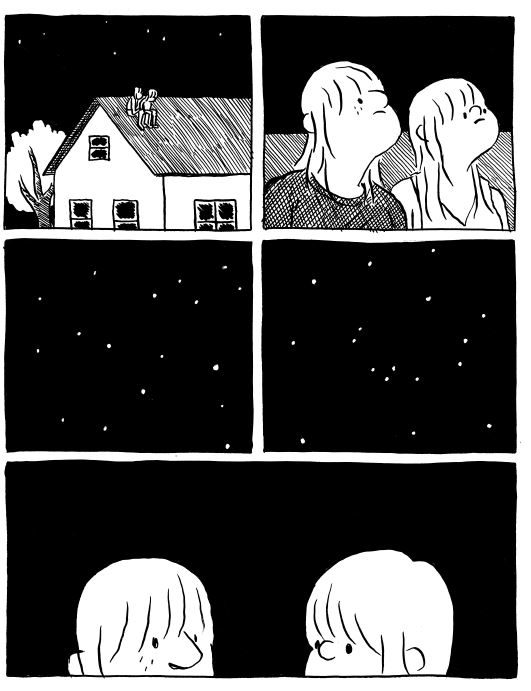 That very sketch – a floppy-haired teen, popping an ollie on a skateboard – was the first iteration of the character James. Soon after, Alyssa followed and their story was in full swing. Unravelling chapter-by-chapter as a serial, the process was very much an organic one, something that Forsman had long been craving as a storyteller.

“I had never really considering serialising a story before, until I did it by accident. In the beginning, it was very improvisational, which is something I like to do sometimes – especially when I’m blocked. Free writing is a good way, I feel, to learn to get out of your own head and just get stuff down on paper.”

Before long, the mini-comics were beginning to turn heads and publishers were getting in touch. In 2013, once the serialisation had come to an end, the chapters were collated into a book by Fantagraphics, which, years later, fell into the hands of British producer and filmmaker Jonathan Entwistle. Today, it’s a Netflix Original Series and, without hyperbole, a global phenomenon.

Much of the reason that Forsman’s story resonates is due to its distinct take on the perils of youth. While James and Alyssa’s story is certainly extraordinary (think writing off cars and run-ins with a satanist cult rather than underage drinking in a supermarket carpark), young people have identified the everyday within it.

Be it feelings of alienation, strained relationships with parents or the heady rush of falling in love for the first time, TEOTFW encapsulates adolescent distress in a way that is both peculiarly idiosyncratic and intensely relatable.

While he notes that he never set out to write “teen fiction”, there’s something about Forsman’s two bizarre anti-heroes that feels like an antidote to the tropes that usually follow pop-culture’s depictions of young people. Such characters – dejected teens facing the fears of adulthood – is a theme that’s concurrent throughout Forsman’s work, despite the fact he was born in 1982.

“It’s a subject that I keep coming back to in my work, even when I try not to,” he says. “My dad died of cancer when I was 11. It sort of put me into a depression, that I didn’t really realise I was in for a lot of years. It changed my perspective on what life is and what the world is, and I felt that I grew up a lot faster than my peers.” 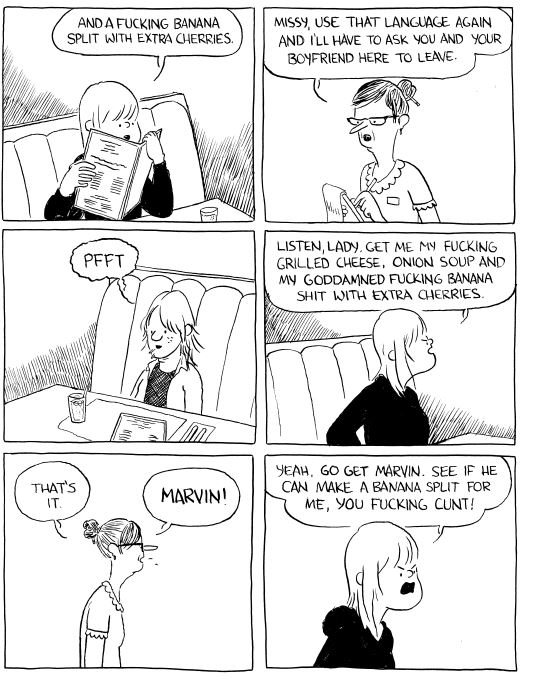 In constantly revisiting this period through his work, Forsman explains that he’s probably trying to analyse his own feelings, even if he’s not quite sure what they are. However, this analysis – of dread, escapism, amplified emotion – has resonated on a universal scale, and the success of both the book and the show are a testament to such.

While Forsman never intended to become a poet for the pitfalls of pre-adulthood, his work (be it pained telekinetic teen Sydney in I Am Not Okay With This, or the acid-dropping Mike and Wolf in Celebrated Summer) sings to this period in one’s life – and none more so than TEOTFW.

“I’ll get an email out of the blue from young people like, ‘hey, I just sat in a bookstore, I didn’t buy your book but I read the whole thing and I cried!’ – and that’s like the best reaction for me.”

“Especially with the show, I’ve suddenly been contacted by teenagers from all over the world who are just identifying with those kids, James and Alyssa. Isn’t that amazing? That’s why I do it.” 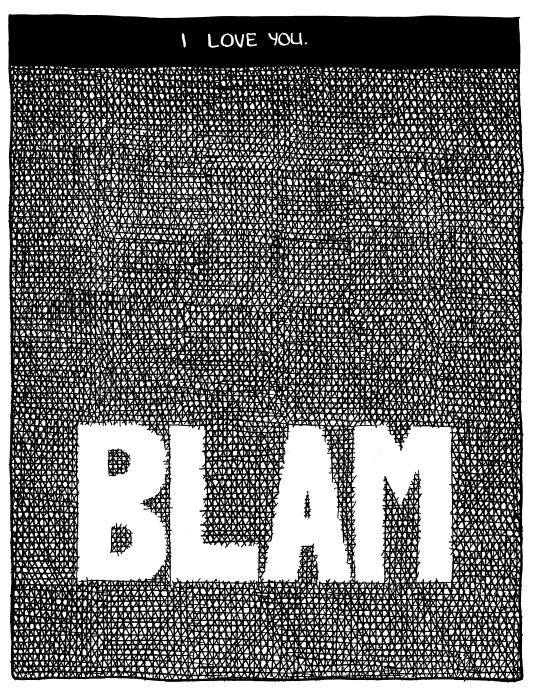 The End of The F***ing World is now available in the UK through Faber and Faber.

Linkedin
RELATED ARTICLES
OTHER ARTICLES
Thomas Hoepker‘s images taken during a road trip across America provide a searing social commentary about a divided country.
Whether it's partygate, the climate crisis or the spiralling cost of living, the fightback begins on the picket lines writes Tommy Vickerstaff
The author discusses the all-consuming nature of heartbreak, and turning the experience into an incisive exploration of love and loss.
In her new book, the author explores the country’s housing crisis in human terms and calls for radical action to address a broken system.
Proposals to introduce a minimum GCSE threshold for student loans will disproportionately affect those from marginalised backgrounds.
Freddie Miller’s new series of photographs investigates who today’s trainspotters are and what drives their unfettered enthusiasm.