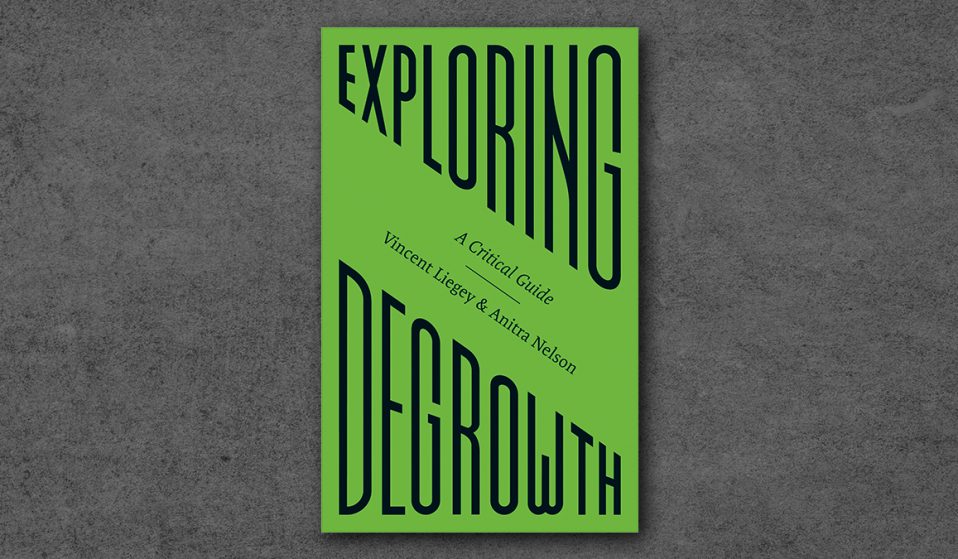 In their new book, Exploring Degrowth, authors Anitra Nelson and Vincent Liegey set out the political tools for a younger generation to prevent disaster.

In their new book, Exploring Degrowth, authors Anitra Nelson and Vincent Liegey set out the political tools for a younger generation to minimise inequalities between people and prevent disaster.

We have until 2030 to avert irreversible climate change. The challenge facing humanity is overwhelming, particularly when framed against the backdrop of a society characterised by ever-growing inequality, compounded by our drive for ever-increasing growth.

For many, it’s impossible to imagine how we might overcome the challenges ahead or what a society capable of doing so might look like. In their new book, Exploring Degrowth, Australian academic Anitra Nelson and French degrowth activist Vincent Liegey have set out to do just that. Investigating the decade’s long history of degrowth, before laying out it’s contemporary principles and what they might look like in practice, the pair have attempted to create a blueprint for a future free from crises. Speaking to Huck, Nelson and Liegey consider what a degrowth society might look like, and how to get started.

For someone that’s never heard of it before, how would you describe degrowth?

Liegey: Degrowth started as, and is still, a type of provocative slogan. It’s an invitation to deconstruct a lot of implicit beliefs about society. In essence, it’s about deconstructing or radically attacking the economic growth which is at the centre of our civilisation. It’s about saying that infinite growth on a finite planet is not possible for more and more obvious reasons.

Nelson: One of the problems is people think degrowth must mean poverty or austerity when in actual fact, degrowth is to growth as quality is to quantity, it’s not about them being at either ends of the spectrum. They are the reverse of one another: one is quality, that’s degrowth, and one is quantity, that’s growth.

How do you get people to start questioning those beliefs? How would you start the conversation with people?

Liegey: When I start to speak about degrowth with the yellow vest movement in France, for example, it’s usually people living in ruralities who are quite poor so I will start to talk to them, asking them about the recent past, which doesn’t really exist anymore. I’ll ask them: “When you were a child and your washing machine went out of order, what did you do?” and then they would engage in a discussion. They’d say: “We had someone in our neighbourhood who was able to repair it and that’s not the case anymore.” Then you can start to instigate a discussion about autonomy, about how growth-based economy and consumerism started to take away a lot of know-how and a lot of freedom from ourselves.

Nelson: In Australia, because we’re a settler society where we use four to five times what we should in terms of living within the planet’s limits, I talk to them about what we can do directly as individuals, like using public transport, and using bikes. Inevitably, they’ll see all of the different policies of society at large that are problematic.

And how do you make sure that it isn’t simply just people making individual choices, but becomes this society-wide change that you’re advocating for?

Nelson: We’re a social movement and we certainly don’t think that doing things just by yourself is going to transform the world. One of the really key aspects of degrowth is that we want to minimise inequalities between people. Degrowth is very much about relationships between people.

Liegey: We’ve been very clear that even if everyone made a personal commitment to reassess their environmental footprint, it wouldn’t be enough. We can already see in the poor communities in the UK, France or in Hungary (where I live), they don’t consume much, but they are suffering from misery and sometimes starvation and facing very tough material conditions. Yet, their environmental footprint is still significant, because they live within a system that makes them dependant on, for example, a type of food supply chain which is environmentally unacceptable. As much as degrowth is an invitation for an individual journey, it’s connected to a radical, collective political transition to a new model and society.

Liegey: One of degrowth’s main aims is to move to a society more based on limits. To relocalise our lives in an open way, so the main goal isn’t a type of protectionism where you create the “right” community wherever you are and you protect yourself from the rest of the world. It’s more like open frugal abundance, where locally you produce enough for all the people who are living locally to have a decent life, to ensure you don’t starve and you get everything you need and all the care needs you require with open borders. We really believe in solidarities between the territories and I personally believe in the force of multiculturalism and multilingualism, and to meet and to share. We always have something to learn from each other.

Nelson: When I envisage what it would be like in Australia we would be decentralising, so lots of the cities would be merging back into the countryside, there would be as much as possible living on the land that’s around you and repopulating areas. It would be very much based on appropriate technology, so not necessarily simple technology, but technology that has principles of sharing, minimising equalities and respecting the limits of earth. It would be a slower life, and people wouldn’t necessarily be working for money because the local community would be self-provisioning and it would be organised to meet people’s needs.  I think there’s an extremely limited role for a car in a degrowth future. The whole concept of frugal abundance is very illustrative of people actually enjoying living more simply, so it gives us time to be in one another’s company and to enjoy and regenerate nature.

What’s the main thing that you want people to take away from the book?

Liegey: I think we are at a historic crossroads for our civilisation. COVID-19 was very revealing of the weaknesses of our model. We will face a very tough economic crisis in the coming months where the most precarious people will suffer even more than they used to before. There is an acceleration of climate change and biodiversity loss beyond what even the most pessimistic studies had predicted. There is a deep political crisis, with increasing weakness in our institutions as people just do not trust them anymore. My hope with the book is that we offer the political tools to help the younger generation who want to find solutions to the crisis.

Exploring Degrowth: A critical guide is out now on Pluto Press.

Linkedin
RELATED ARTICLES
OTHER ARTICLES
The pro skateboarder withdrew from the 2020 Olympic Games so he could come out as trans. Now, he’s hoping to encourage others to live as their authentic selves – within the sport and beyond.
A new law change is enabling Britain’s donor-conceived children to know the truth about their origins – but campaigners say the fertility industry must do more to protect people.
A new podcast is opening up the conversation between trans women and trans amorous men in the hope of building coalitions.
Zsófia Sivák’s ongoing project documents the country’s tavern culture, preserving a once defining part of rural life.
Photographer Sean Maung reflects on documenting a small town in Pennsylvania afflicted by high levels of unemployment, poverty, violence, crime, and addiction.
Mass crustacean die-offs in the North East have led a community of fishermen to take action to save their seas.