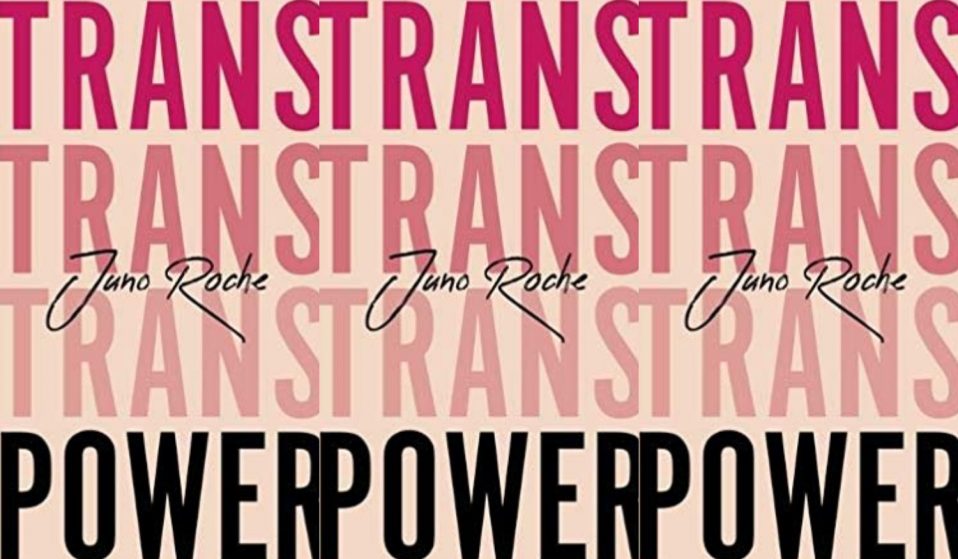 In their emboldening new book Trans Power, the LGBTQ activist makes an urgent call for change, while offering a new perspective on ‘trans‘ identity.

In their emboldening new book Trans Power, the LGBTQ activist makes an urgent call for change, while offering a new perspective on ‘trans‘ identity.

Last year, activist Juno Roche travelled the UK to interview queer people about their sex lives. The result, Queer Sex, was intimate and eye-opening, as much a journey for the reader as it was for Juno, who interspersed memoir-style passages about their gender reassignment surgery and struggles with their own body throughout the book.

The book calls for the disavowal of words like ‘real’, and instead calls for an embrace of the word ‘trans’. It creates a space not just for Juno’s own musings, but also for a cast of interviewees including Amrou Al-Kadhi, Travis Alabanza and legendary ‘gender outlaw’ Kate Bornstein to wax lyrical about their experiences. “We’re told there can only be one trans book per year, but we’re not playing that game any more,” they tell me of the decision to structure the book again as a series of interviews. “I’m bringing as many people along as possible.”

This spirit of radical collectivity permeates Trans Power, which is as heartwarming as it is heartbreaking. Ahead of its release this month, Juno decided to open up about everything from the ‘broken’ gender binary to trans safety, the politics of passing and the importance of learning to step back and breathe easy.

Throughout Queer Sex, you wrote about not being able to look at your own body, but Trans Power sees you own it completely. Has writing these books helped with that?
Juno Roche: I can’t tell you how cathartic it’s been. A lot of the time, it’s the journey of actually going to meet the interviewees, and then hearing myself talk about my body in these different houses. For me, the physical transition was never going to be enough. I had to transition mentally as well, which meant thinking conceptually, philosophically and emotionally. I feel like I fully understand my body now, in a layered sense that is so far away from gender. The minute I interrogate it through that lens, I feel like it’s failing.

You’ve always written in a really unfiltered way and used new words, especially when talking about your body. Is that you trying to create new space?
Juno Roche: I used to go on Tinder, and I was always struck by how many people asked: ‘have you had the operation?’ It made me think about my surgery, what had actually happened: a surgeon had taken bits of my cock and balls and up-cycled them into something that looks like a vagina. That’s brilliant – it’s like alchemy! So I started saying that. It does create space, but not always good space – there’s not a line of people waiting to investigate my genitals, but I am speaking my truth.

The introduction talks about moving away from language like ‘real’, and you talk about embracing ‘trans’ as a label on its own. What sparked that?
Juno Roche: To me, gender shuts down everything. It categorises. It means that some people are paid less, or they face more danger. It means a whole bunch of stuff, right down to women and coronary heart disease. So what about if I don’t say I’m a trans woman; if I just say I’m trans? The landscape is vast, because nobody has wanted to claim that – we’re told to look as real as possible, to transition from A to B. I don’t think that’s the way of the world; it’s what we’ve been sold, but we have the capacity to change that.

It does seem that society can only accept trans identities when they’re packaged in that ‘shift from A to B’ narrative, in those oppositional terms.
Juno Roche: We don’t even just have these fixed points of male and female. We have these two other insidious terms: feminine and masculine. Those are complex, layered terms. It’s not just enough to look like a woman – you have to look like a feminine woman. That’s a hill that everyone – whether trans or cis – climbs daily, unless you reject it through language. When I say I have an up-cycled cock and balls, people say: “fuck knows what you are then.” That’s fine; if you want to view me as a freak, I’m happier with that than you viewing me as a trans person who looks ‘real’.

In your experience, what do those heightened standards do to trans people?
Juno Roche: I’m lucky, because I’ve interviewed so many trans people in the last four years. So many of them feel like they’re broken or not good enough; that their shoulders are too broad, their noses too big and their hips too narrow. We get one short life, so we can’t spend it worrying so much about whether the bodies we walk around in please other people.

Still, I get that this is about safety. If I were a black trans woman in America, where murder rates are horrific, then ‘passing’ would matter terribly. But those are often the women who can’t afford surgery. I did a piece of research for a law firm a few years ago about Asian countries, where the average trans person would be barely earning enough to survive, let alone to pay for facial surgery. That safety comes at a cost, and even then it’s not safety, because if a man goes to bed with a trans woman and feels like she ‘tricked’ him, he murders her.

There’s a real sense of rebellion to this book – it’s there in the title, Trans Power. Was that deliberate, or just a natural reflection of how you feel?
Juno Roche: I’ve been an LGBTQ activist since the late 1980s. What’s the point in having this experience if I don’t take risks? To me, trans is [currently] made in the eyes of others. People say they would never know I was trans, and that makes me feel like I’ve failed – I want a proud trans identity. I’m saying: ‘come on, let’s fucking take this back from them!’ Yes, people can have whatever surgeries they want – that’s free choice. But I’m saying we can create even more safety and more space if we really honour trans bodies, and say that they’re beautiful as they are.

Do you feel like there’s still a reluctance to talk about trans bodies?
Juno Roche: There are plenty of trans women who will always have a cock, and plenty of trans men who will always have a cunt. We need to get our heads around that. Why should we disguise that? I want younger people to be able to ask a wider range of questions. If a surgeon says they want to make them look ‘real’,  I want young trans people to feel like they can say: ‘I’m not so concerned about that; I want to have orgasms, is there a way you can do that?’

I want 21-year-olds to be able to have easy, breezy orgasms if they want to. Also, if someone has had a cock for 30 years and then has an operation, they won’t be able to bang out a quick wank any more – nobody talks about that. They say that women have different, deeper orgasms; that they put on music, light candles and float away. Fuck off – that’s not the case at all!

That bluntness and openness comes through in every interview; especially with the likes of Travis and Amrou, they speak so candidly.
Juno Roche: These people know my work, and they know that I throw myself under the bus so that they don’t have to. Interviewing Kate Bornstein and their partner Barbara [Carrellas] was huge for me – they don’t do that! I felt I had a relationship with both of them through their books. In [Barbara’s book] Urban Tantra, there’s a line which explains that we breathe badly; we get nervous and uptight, so we stop breathing properly and then leaves us with headaches and stress. It resonated, because I’ve read articles by trans women who won’t go out on a windy day in case their hairline is revealed. We constantly hold our breath and hope that people don’t notice.

There’s a real feeling that this book has done as much to help you as it will to help the trans community. Is there any particular interview that completely reframed your perspective?
Juno Roche: I went to Newcastle to interview Fiona and her partner Tyler. He had been house-bound for eight years and bed-bound for three of those, but he still transitioned. I felt instantly seen and heard around them; I felt so honoured to share this with them. Everyone has been so generous, kind and sweet – they feel like my book family! My real takeaway was that we’re building momentum. We’re creating our own structures. I’m not doing any of this to become a trans celebrity; I’m doing it because I love writing, and getting lost in these interviews. When I sit here in Spain underneath my olive tree, I think of all these fantastic young queers. It makes me feel like we’re really getting somewhere.

Trans Power is out now.

Linkedin
RELATED ARTICLES
OTHER ARTICLES
Those set to be impacted by the governments ’undemocratic’ bill explain why it risks silencing them.
From Brooklyn gang members, to Welsh miners and the residents of East Harlem, Bruce Davidson used his camera to shine a light on the most marginalised.
Jermain Cikic reflects on his experience of visiting the island of Samos, Greece, in the summer of 2021.
A new book traces the legislation’s tumultuous history and the lasting impact its had on LGBTQ+ activism today.
The internet furore surrounding a certain NY-based furniture designer should make us question whether condemning people in the harshest possible terms harms more than it helps.
The photographer reflects on building trust with his subjects and using the street as his studio.