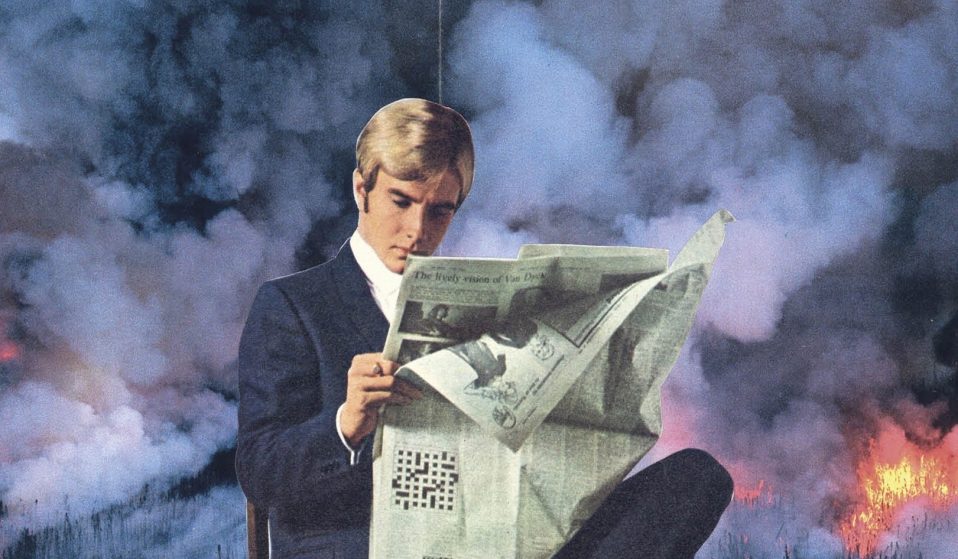 In his new book, Notes From An Apocalypse, the Irish author investigates our in-built obsession with the end of the world.

In his new book, Notes From An Apocalypse, the Irish author investigates our in-built obsession with the end of the world – meeting preppers, bunker entrepreneurs and would-be Mars colonists from around the globe.

There’s a strange air of prescience to my interview with writer Mark O’Connell. As it happens, his latest and second book, Notes from an Apocalypse, is an investigation into end-times obsessives – preppers, bunker entrepreneurs, would-be Mars colonists – in which he visits doomsday hotspots and faraway hideouts, from South Dakota to New Zealand, the Scottish Highlands to the Chernobyl Exclusion Zone.

“It’s quite unsettling to see all of these things I’ve been writing about very suddenly manifest in everyday life on the street,” he says soberly, over the phone from pre-lockdown Dublin.

Dreadfully timed or not, the book sees the essayist and nonfiction phenom set out on a series of “perverse pilgrimages” across the planet, visiting the individuals and communities bracing themselves for the worst. Now that an epochal pandemic has struck, the book’s fears have in part been realised.

Landing in the US, he meets a bevy of gun-toting preppers, the kind of guys who inexplicably all wear wraparound shades and bulk-buy freeze-dried food. He goes to New Zealand, geographically positioned to brace some of the worst effects of climate change, as the country has become a safe haven for billionaires like Peter Thiel. While some people today are frantically hoarding pasta and toilet paper, the one per cent are stocking up on fortified mansions, access to fresh water and clean air, and private security fleets.

Notes From an Apocalypse isn’t so much a gonzo guide to end-of-the-world scenarios as a series of meditations on the human condition, capitalism, and fatherhood. Building on his exploration of transhumanism, To Be a Machine, O’Connell continues to question our primordial desire for transcendence. He treats the apocalypse as somewhat of an anachronism, a failure of humans to view ourselves as anything other than nature’s ultimate protagonist. We caught up with him to find out more.

One takeaway from the new book, especially compared with To Be A Machine, were the overt strains of anti-capitalism that run throughout. Have you become more radicalised since the last book?
Mark O’Connell: You couldn’t write about this stuff without writing about capitalism. I get annoyed with people who speak about climate change in a way that seems ideologically neutral, as though there’s not a gigantic elephant in the room. It is political. Consumerism and capitalism are destroying the planet.

I am very much an anti-capitalist, and have always essentially been a socialist. I definitely have become more entrenched in my socialism as I’ve got older, and there are a couple of allusions to this in the book. The typical trajectory that I would have been aware of was the cliche that when you get older – and I turned 40 recently – you get more centrist. As you get more established in your career and more comfortable, you drift to the right. That definitely has not happened to me; the opposite has happened. I think it was to do with having children, and all a sudden all of these ideas that were abstract in some way suddenly become about your children and the world that they’re going to have to live in. This ideology is sickening the world and making it very difficult for people right now; maybe untenable in the near future.

Reading your books, it’s also obvious that you have an abiding fascination with America, both as a nation-state and as a political concept. Or, to put it another way, you’re appalled by it.
Mark O’Connell: There’s no getting around it: I’m definitely fascinated and, as you say, appalled by America and American culture. It’s so all-consuming and it bleeds out into so many aspects of everyday life in the West, and sucks a lot of oxygen out of the rest of the world. It also pumps a lot of good things into the world as well, culturally speaking, along with all of the bad things.

For reasons that have to do with American history, and its sense of itself still as a frontier nation, a nation born out of apocalyptic fervour, America still has a very apocalyptic sensibility to it. I could’ve written about preppers from Ireland or Britain, but it seemed that the psychology of that subculture seems to speak much more intimately to American culture and Americans’ sense of themselves. They often view themselves as self-sufficient; that really rugged individualism. America also just looms really large in all of these political conversations.

I found it compelling how you entwined doomsday prepping with consumerism – how buying shapes their world-view. There’s no escaping consumer capitalism even for something as far-out as preparing for martial law and civilisation collapse.
Mark O’Connell: All this stuff was abstract before, but has become very real in the past few weeks. And it’s intensifying as we speak, these apocalyptic anxieties. People stockpiling food, and panic-buying imperishables and toilet paper. I am very interested in how all these anxieties get mediated through consumerism. You prepare for the end of the world by buying. Before, people would’ve prepared for the apocalypse by ‘getting themselves right with the Lord’. Now, it’s shopping; shopping is the thing that will save you. Shopping in the right way, shopping smartly. And it’s really interesting to me how this reflects the dominant ideology right now, which is every man for themselves. That’s part of what the book is trying to do: make a case – in a subtle, non-polemic way – for community as the way we’re going to survive as a civilisation. It’s not by clearing out the shelves at the supermarket or filling your bunker with pasta primavera mix. It’s by strengthening ties in communities.

Are you hopeful about whether those connections or ties that have broken down over decades can ever be returned?
Mark O’Connell: I’m not convinced by either my own pessimism or my own optimism. That’s part of the conversation that I’m having with myself in the book. My mother read the book, and said it was wonderful how the book moves from a position of absolute pessimism about the world to hopefulness. How the kids have helped bring me to do that position.

That is definitely the trajectory of the book, but it’s also not that straightforward because the hopefulness is really tentative and, in some ways, an act of will. I’m a very happy person, but I don’t have a bedrock belief that things are going to be okay and the world moves in the general direction of progress. I’ve never thought that, and I think fewer and fewer people have that belief now. Right now, things do not seem great. If I’m honest, every time I look at the news, a knot in my stomach gets tighter.

As the book comes to a close, you’re talking to your wife about a headline you read about insect populations going extinct. All while she’s breastfeeding. That’s an everyday thing now: regular interactions are interrupted by gravely serious stories via headline or instant notification. There’s momentary disgust and sadness, then normality, then another existential whack.
Mark O’Connell: There are so many different reasons why this is the case. To some extent, in rich countries in the north, we are more or less insulated from the immediate effects of climate change. Even now, with climate change understandably taking a backseat to coronavirus, there’s still this cognitive dissonance surrounding it. There’s a real, terrifying uncertainty at the moment; this sense that everything has changed pretty radically over the past few weeks. Our sense of how secure we are in our institutions, in our everyday lives – that seems under threat. Yet at the same time, life goes on. In my comparatively very privileged life, this is like a really fucking mild version of what goes on in places in the world where there are serious crises like wars and revolutions. Life still goes on in these places.

You allude to this on a number of occasions in the book, that the apocalypse has already visited certain communities and cities and towns across the world. Does something like the coronavirus help break down invisible barriers to show how fragile all of our systems are?
Mark O’Connell: Climate change has been doing this in a much more slow and insidious way, for quite a while. Coronavirus is extremely dangerous only to a relatively small section of society; for most of us, not particularly dangerous at all. But it is a blacklight showing up all these fault lines in our societies. It’s holding up a mirror to us and who we are and what we’ve become. Lack of investment in public services and healthcare have been shown up by this; our lack of faith in government that’s been radically exacerbated over the past few years; the way in which information has simultaneously become all-consuming and also highly unreliable. The coronavirus crisis is proving this.

The apocalypse is not an absolute thing. It’s just part of how we think about the world, how we think about history and the future. It’s part of how we construct meaning. We need beginnings and middles and endings to understand things; we’re storytelling creatures and we’re only ever in the middle of things. We’ve no idea what the ending is, so the apocalypse is this neat way of tying things up and projecting ourselves past it. It’s always the end of the world, and we’re always finding some reason to think apocalyptically. Obviously, we have quite a good one now: [the virus is] affecting how we relate to one another and go about our everyday lives. So even when we’re talking about the end of the world we’re not talking about the apocalypse – we’re talking about a threat to our everyday life.

What we’re actually thinking about is the collapse of our privilege, about having to live life in the way that the people growing our coffee live. It’s worth bearing in mind that possibly most of the world lives in a way which, if our lives transformed into that, we would consider it apocalyptic. 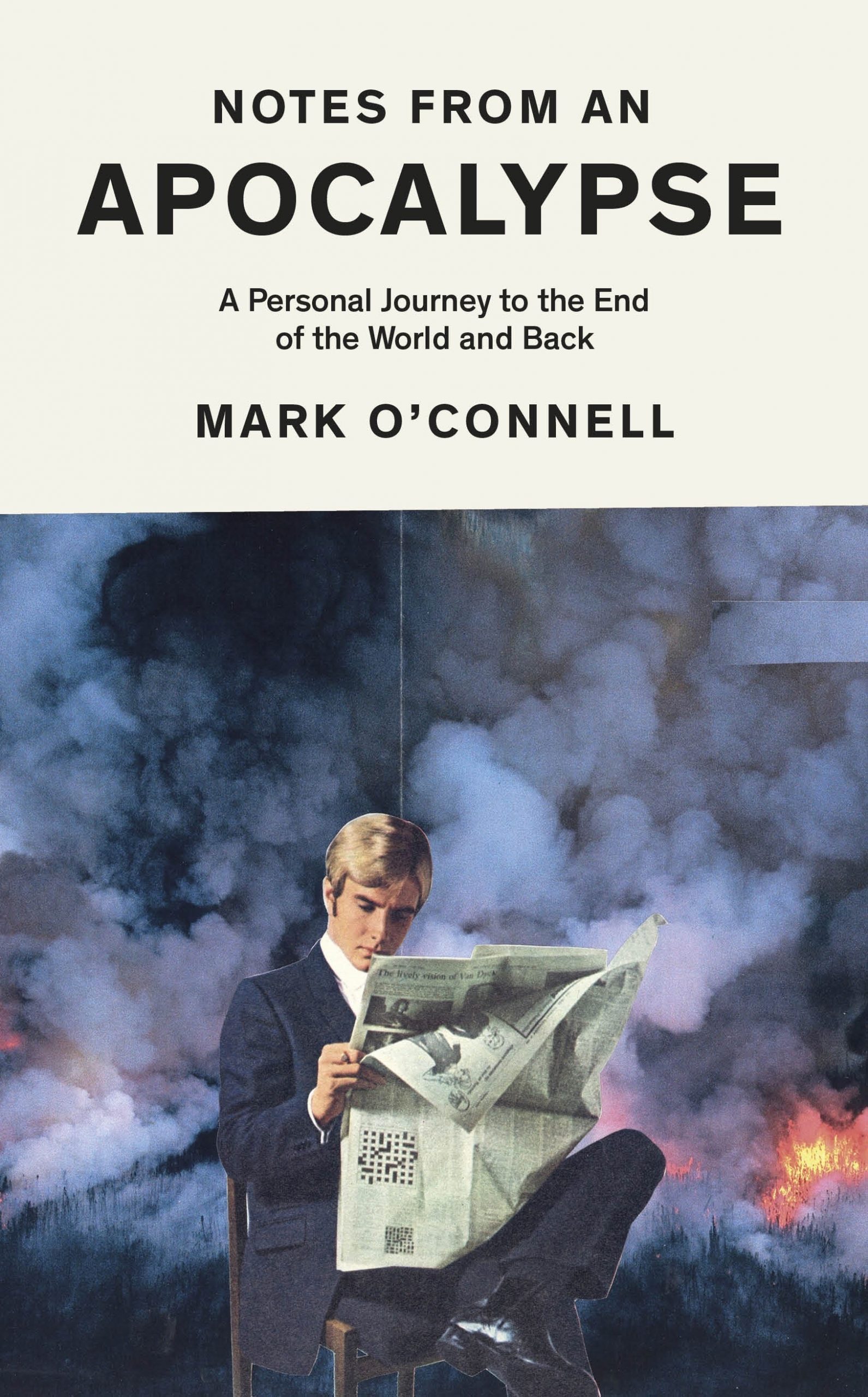 Mark O’Connell’s Notes from an Apocalypse is available now, and published on Granta.

Linkedin
RELATED ARTICLES
OTHER ARTICLES
In 1984, Martin Shakeshaft set out to document the miner’s strike as it really happened, using his photography as a tool for activism.
The rapper talks injecting humour and fun into his sound and challenging drill stereotypes.
Mike Smith’s intimate photos offer a detailed record of the inhabitants of Boston’s streets in his characteristic non-judgmental yet direct approach.
The Philadelphia local has made a name for himself capturing the hardcore scene – and over more recent years, he’s been ramping up his coverage of the fight for social justice.
Leading art critic Robert Storr reflects on the photographers – from Seydou Keïta, to Malick Sidibé, to Carrie Mae Weems – who helped to transform and redefine the medium.
Welcome to the Death Well: a gravity-defying display of fearlessness that reimagines what’s possible on a two-wheeled machine.