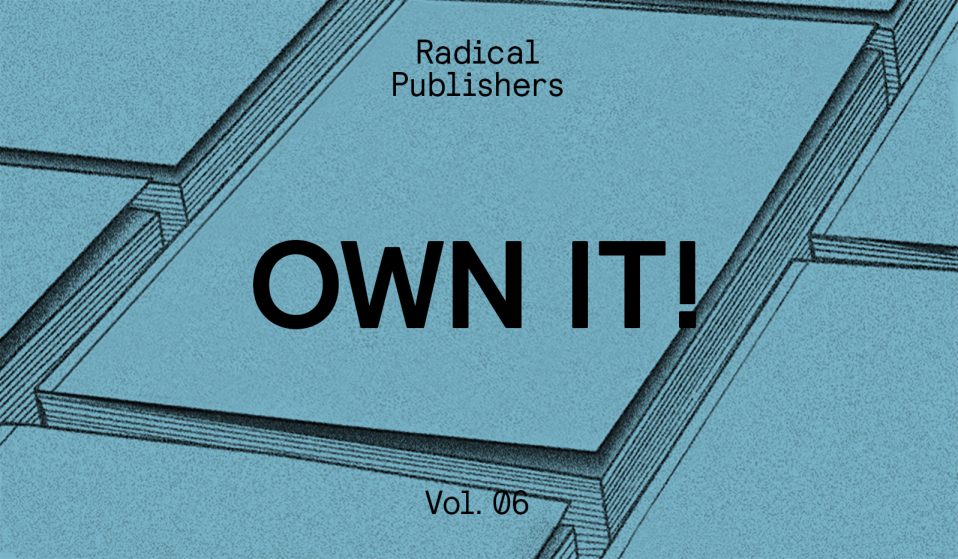 OWN IT! is a ‘storytelling lifestyle brand’ that blends traditional publishing with digital innovations and integrated live shows, creating a space where art meets activism.

Launched in 2014, OWN IT! is a ‘storytelling lifestyle brand’ that blends traditional publishing with digital innovations and integrated live shows, creating a space where art meets activism.

If you think you know where the boundary is, think again. OWN IT! is the boundary. Maybe OWN IT! is even beyond the boundary, sat firmly at the vanguard, doing things no other independent publishing outfit is doing.

The company is owned by Crystal Mahey-Morgan and Jason Morgan, who both come from arts backgrounds. Jason has been involved in music nearly all his life and was a member of UK hip-hop group 12 Stone Productions, while Crystal was a performance poet, a marketing manager for film festivals, and then at Penguin Random House for seven years before establishing OWN IT!

What links Jason and Crystal’s lives is storytelling. OWN IT! was set up, as Crystal tells me, due to a frustration with the book industry. “There was a lack of different voices being published and – as a result – a lack of stories that audiences wanted,” she says. “I felt like we were missing out on readers who didn’t realise they were readers.”

Crystal felt that at the time she established OWN IT!, there was much more they could be doing in the digital landscape, as well as in other artistic industries like music and performance: “Now, five years later, you’re seeing big publishers collaborate with certain grime artists [Stormzy], but I felt like that could have happened a lot sooner.”

Jason tells me about how he first came to realise that books were so important. After a few of his friends had been put in jail, they started to ask him to send them things he had read and enjoyed. Jason took real pleasure in curating and sending books he knew his friends might like. He found his friend’s perspectives changing, and felt the positive force in reading. “It sounds cliched, but you can change lives with storytelling,” he says.

OWN IT! don’t like to use the industry term ‘reluctant readers’ and prefers to think of everyone as a ‘potential reader.’ Crystal cites lines from Spike Lee’s Mo Better Blues to explain their position; “if you play the shit that they like, the people will come. Simple as that.”

Robyn Travis, author of two OWN IT! books, is a case in point. His remarkable memoir, Prisoner to the Streets’, is ostensibly a meditation on the destructive nature of gang life in London. It has not only reached many young men in prison, but the mothers of young inner city youth and furthermore; the perceived ‘mainstream’.

“We’ve had mums say to us, after having read Robyn’s book, that they understand a little bit more what their sons are going through,” says Crystal. “And then we were in Cheltenham last year and we had 50 plus, over 50 silvered haired middle-class white women come to Robyn’s event and sold so many copies there. That’s very much our approach, we’re not trying to ghettoise anyone’s story – we can take it anywhere in front of anyone.”

Crystal and Jason met Robyn through a mutual friend. Whilst this is common in all publishing, the mere fact that they are born and bred east-enders from Asian and Caribbean backgrounds and steeped in music, fashion, film and spoken word – essentially the opposite of most people in publishing – means they have organic access to a different set of networks and spaces, this leads to finding new voices and essential stories.

Crystal feels that OWN IT! is “as much activism as it is art,” and that the two things go hand in hand. “We don’t publish ‘political books’, but all of our books feel indirectly political in the stories they are telling or the people they are speaking to.”

OWN IT! is not only diverse in what it publishes book-wise but also in what it plans for the future. The pair are currently working on a catalogue of music production which people will be able to license directly, and have several lines of “story t-shirts” in development. But most interestingly, they have started a Literary Agency, something other independent publishers have discussed but not gone through with. Crystal says, “There’s a real gap for representation for writers who don’t come from a traditional publishing background where an agent can work with them to sell their craft and vision whilst getting them the best terms.”

So, a publisher slash music licenser slash design studio slash literary agency slash activist slash theatre production slash … wait – OWN IT! really is a story telling lifestyle brand. If you want to ride shotgun in a vehicle that’s speeding into the future, jump in OWN IT!’s car and head for the hills.

A brilliant, insightful debut novel written in the form of letters from a prison inmate, ruminating on his past and present life. A unique and eye-opening exploration of black masculinity, challenging different definitions of manhood, whilst remaining an engaging, witty and at times laugh-out-loud-funny.

Moments of Significance by Shauna O’Briain (aka MC Angel)

A devastating and uplifting memoir of O’Briain’s life growing up as a white working class queer woman on a London council estate. Told through an original non-linear narrative mix of poetry, prose, fragments and meditation – it’s a book you won’t forget.

Reflections of Me by Kirsty Latoya

This is the collected works of poet JJ Bola (also author of the OWN IT! novel, No Place To Call Home). Bola’s work is centred on a narrative of empowerment, humanisation, healing of trauma as well as discovery of self through art, literature and poetry.

Learn more about OWN IT! on the house’s official website.

Linkedin
RELATED ARTICLES
OTHER ARTICLES
A new law change is enabling Britain’s donor-conceived children to know the truth about their origins – but campaigners say the fertility industry must do more to protect people.
After a two-year hiatus and a new album, the Nigerian artist is riding high. Now, he wants to bring his alternative, genre-bending sound to the world.
Photographer Sean Maung reflects on documenting a small town in Pennsylvania afflicted by high levels of unemployment, poverty, violence, crime, and addiction.
A group of aid workers face prison for helping to save people fleeing their homes at sea. If they are charged, it will have a chilling effect on humanitarian efforts.
The first-generation graffiti artist reflects on the tagging’s emergence as an art form and the players who pushed the medium forward.
A new podcast is opening up the conversation between trans women and trans amorous men in the hope of building coalitions.