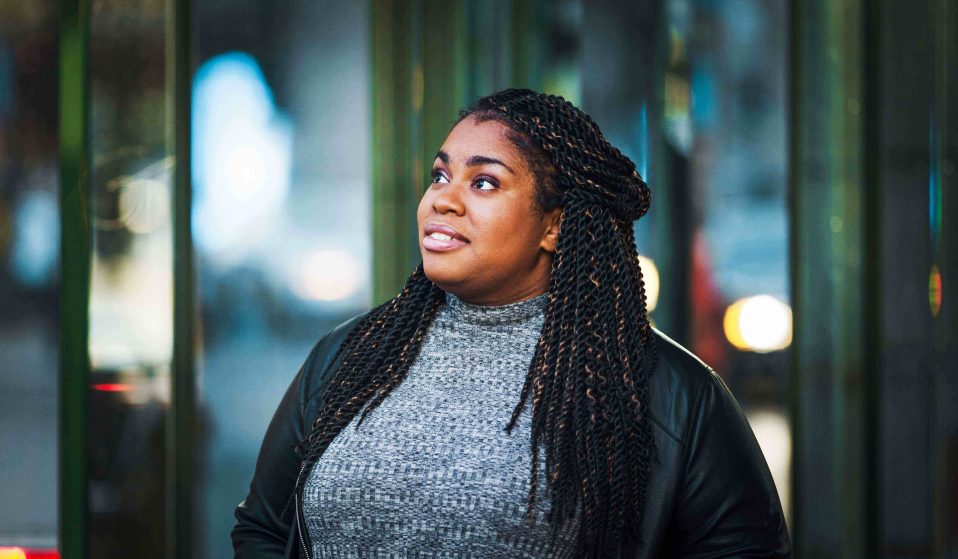 The bestselling author of The Hate U Give talks rage, resistance, and the political power of hip hop.

The bestselling author of The Hate U Give talks rage, resistance, and the political power of hip hop.

Four years ago, Angie Thomas sent a tweet that changed her life. Coming to the end of her tether after her book had been rejected over 150 times by publishers, she asked American literary agent Brooks Sherman if books about social issues were off the cards during a Twitter Q&A. The agent encouraged Thomas to send her book in… and a superstar of young adult fiction was born.

That book Thomas had been writing around her day job was The Hate U Give (THUG): the story of 16-year-old Starr, who witnesses her best friend being shot by the police. Published in 2017, the book was an immediate bestseller, selling two million copies worldwide. A critically acclaimed film adaptation, starring Amandla Stenberg, swiftly followed suit the following year.

And Thomas hasn’t stopped since. Her new follow-up novel, On the Come Up, has earned a similar level of accolades. A film adaptation has already been announced. In the book, Thomas returns to Garden Heights, the fictional neighbourhood THUG was also set in, this time following 16-year-old Bri who dreams of making it as a rapper.

Coming to the end of a whirlwind book tour in the UK, Thomas is tired but still enthusiastic. When asked how she feels about her success, she laughs and responds with her lyrical Mississippi accent: “It’s a dream.” Speaking simultaneously self-consciously and self-confidentially over the phone from a hotel room somewhere in London, Thomas talks anger, the political power of hip-hop, and putting faith in the youth.

Why did you want to write a book about rapping?
I wasn’t used to seeing young adult literature pay homage to hip hop, or even have main characters who listen to hip hop. A lot of times in YA literature, the protagonist will listen to indie rock or old school rock. But hip hop is the biggest music genre in the world, and for so many young people that’s what they listen to and that’s what they identify with – I wanted to speak to them through that because that’s my music too, that’s my culture too. I wanted to pay homage to that and show people how much of an art it is. Hopefully, that will help validate it for others who may write it off or not think of it as much.

You articulate anger so well in your books, particularly the anger that comes from being young and a minority. Why is anger something you want to explore?
It’s definitely important to me, especially when it comes to young black girls and black women. So often there’s the stereotype of the angry black woman, and that stereotype doesn’t even allow us to be angry. It makes us think we can’t be angry because there’s something wrong with that. But the fact is, white men get to be angry and they get elected to office – so why can’t we be angry every now and then? Why can’t we be passionate?

Just because we’re angry at times, doesn’t mean we’re not also joyful, doesn’t mean we’re not triumphant, or sad at times. When we’re angry that doesn’t mean that’s the only emotion we’re capable of having – it just means we have that emotion at that time, so why can’t we be given the benefit of complex emotion. If nothing else, I hope I can humanise complex emotion so that young black girls are no longer subjected to that stereotype and made to feel like they can’t have any anger at all when the fact is they are beautiful, complex human beings with a range of emotions and they should be allowed to be as angry as they want, just as happy as they want, just as loud as they want.

Both of your books are about how individual action can snowball into collective action. Do you think there’s a responsibility on each of us individually to be political?
I think we all have that responsibility, for sure. I think we all have the responsibility to make the political personal. We see it right now in America: people did not take politics personally or people just weren’t aware – and because they weren’t aware, we’re in a lot of the situations we’re in now. All of a sudden, everybody cares. Perhaps if more of us had cared before this, we wouldn’t be in the position we’re in now. So, it’s important for us to take things personally and to make an investment in politics. When we talk about systemic racism, so much of it goes to politics. If we want to change the system, we need to change the politicians who control the system. It’s all connected.

Your books are very much about the frustration and exhaustion that comes from taking a stance. Are you feeling that yourself in some ways, with how outspoken you’ve been about issues of diversity in publishing?
I definitely feel like I need to speak out and kick down doors and windows for others. I’m a firm believer that if you get into a higher position, the best thing you can do is help someone else get higher as well – knock down a door and window for them. I’m always going to take that seriously and make it my business to help change publishing however I can, whether that’s speaking out on discrepancies or giving a microphone to other authors of colour, then I’m going to do that.

You cover some heavy subjects in your books like police brutality, code-switching, poverty, drug use, gang violence. How do you find the balance between writing about those subjects and also finding lightness in your books?
It’s important for me to have that balance because I remember when I was younger and reading books about the black experience, a lot of times there was trauma and no triumph. That’s not to say there’s something wrong with those books but I think for me, as someone who writes for young people, especially young black people, in the midst of the trauma I need to give them triumph because that’s what they need right now.

Do you think there’s been a noticeable shift in how rap and literature are responding to politics in the last few years?
Yes and no. Hip hop has always had a political backbone, right back to Grandmaster Flash and the Furious Five with ‘The Message’ which was one of the first socially conscious hip hop songs to ever come out. And in their own way, N.W.A. – people didn’t like they said what they said, but they were addressing police brutality. Hip hop has always done it, it’s just done it in a way that makes people uncomfortable.

With children’s literature, there’s always been a form of politics as well. I look at the Harry Potter series and those books are all about resistance. My generation now, we can talk about resistance because we first learned about it from Harry. But I think what we’re seeing now is more books, especially teenage books, addressing it full on. Instead of alluding to these things, we’re outright talking about them.

What does writing books for and about young people allow you to do that adult novels don’t allow you to do?
I put a lot of my hope in the next generation. Young people are way more aware of lives beyond their own than other generations were and they are determined to change things. That gives me so much hope. Teenagers are also so much more open than adults who are set in their ways and don’t want to hear other perspectives, let along change their perspectives. With young people, they’re willing to listen and even be corrected when it comes to things like racism and internal biases than adults are. It’s important for me to speak to them and write for them, because the young people I write for today are going to be the leaders of tomorrow.

Linkedin
RELATED ARTICLES
OTHER ARTICLES
After blocking the Scottish government’s gender recognition reform bill, Westminster is now devising further changes to the law to make it harder for trans people to self-identify.
After building his reputation covering the US civil rights movement in the 1960s, the photographer went on to produce some of the most enduring images of the past century.
Photographer Sean Maung reflects on documenting a small town in Pennsylvania afflicted by high levels of unemployment, poverty, violence, crime, and addiction.
The action took place in response to the 200 asylum-seeking children who were placed in hotels run by the Home Office who have gone missing.
AI companies that develop image-generators using copyrighted artwork from the internet are coming under fire from artists who say that it amounts to theft.
A new podcast is opening up the conversation between trans women and trans amorous men in the hope of building coalitions.