Former British Prime Minister Margaret Thatcher once argued that there was no such thing as society. That there are individuals and there are families, but little in between, she said.

Great Brixton is a new photobook that goes against that old mantra. It’s a 300-page tome condensing all of life’s joy, oddness, and exquisite banality into nearly a hundred years of history in the London district of Brixton.

Huck sat down with the book’s creative director Scott Leonard, of Brixton’s Champion Agency, to talk about how it all came together…

Why Brixton?
We’re based in Brixton, it’s our home and we’ve been here for over three years now. Lots of great things have taken place in Brixton. David Bowie was born here; there’s the 1981 uprising. Nelson Mandela visited. Will Smith came here when the Black Cultural Archives began their building work. This place has the power to attract greatness and I think it’s got the potential to continue that, but it’s changing at a dramatic rate. It’s changing almost so fast that we felt that we should document it in print, and preserve what we consider great. There’s a lot of change taking place here. Some for the good, don’t get me wrong. But some is questionable, and I think this book was an opportunity to provide a narrative for those who have lived here forever, those that are new to the area, and those that just pop in on a Saturday to get drunk. They can all draw things from this book that we hope will inform and inspire conversations. We want this to be the backdrop to future conversations about Brixton.

How did you handle the process of getting the community involved?
That was difficult. We started by putting out flyers, taking them to cafes, corner shops, libraries – to places we thought would work. We went on London Live. We emailed as many people as we knew. To be honest, the first half of images we had were straight asks. Then we branched out. Someone who has taken a picture of Brixton’s greatness will probably have more, and that opened the floodgates. And then it became, “Oh, my mate’s got some good pictures.” Suddenly we were talking to so many more people and not just those who professionally documented the town. Instead it became people who lived those moments, who captured those moments. There are a huge amount of people documenting Brixton, and we just needed to tap into that, and we did.

How did you manage to collate the final selection of images?
We first had to decide what the book would be about. That was the most important part. There are words that are really strongly associated with Brixton. One is vibrant, the other is diverse, and I think they were the two leading principals by which the book was curated. Then we asked ourselves: do we do it chronologically? Or by event? Do we do it by colour? By age? We tried lots of different combinations, but it didn’t fit. The final 273 images – they found themselves, I think. Once we got the number of photographs down to 350 or so, we had to start forming relationships – the flow of narrative in the book. It starts with a little bit of history. There’s a panoramic of old Brixton, a double-page spread, and then we move into the people of Brixton, then the kids, then the festivals. It sounds messy, but I think if you try to create a book about vibrancy and diversity, then I don’t think you should stick to the rules.

How would you define Brixton?
I think Brixton in itself has always been a rebel town. It’s always been the point of meeting for different cultures. There’s a TED talk by a chap called Mike Urban, who is the editor of [local magazine] Brixton Buzz. And he talks about how in the 1920’s there were a lot of queer people in the area, and the question often asked was, “Are you married, or do you live in Brixton?” And that was the euphemism for being gay. In the 1970’s there were no jobs for the Irish and the blacks, so both communities mixed here. Then there’s the squat culture of the ’60s. Squatters were welcome in Brixton, and it became a really great place for the art community. Then there’s the Portuguese community. There’s a real range of nationalities here, it’s a melting pot of culture. The danger is when that goes way, and it stops being a melting pot, and it changes.

We need to preserve the greatness of this small enclave, and it’s very small. It’s a tiny little place but it stands for so much. And wherever I go in the world, I say I’m from Brixton, and they go, “Woah! Do you mean it?” Being from Brixton means you’re not racist, it means you’re not bigoted. You’re probably not homophobic and you’re probably quite open-minded. It’s almost like a badge of honour, and it’s constantly been at the forefront of change. Two copies of this book will go to the British Library, and your children’s children will be able to read this book in years to come, preserving history forever.

Great Brixton is available to buy here, with £1 of every purchase going towards the Brixton Fund micro-grant scheme. 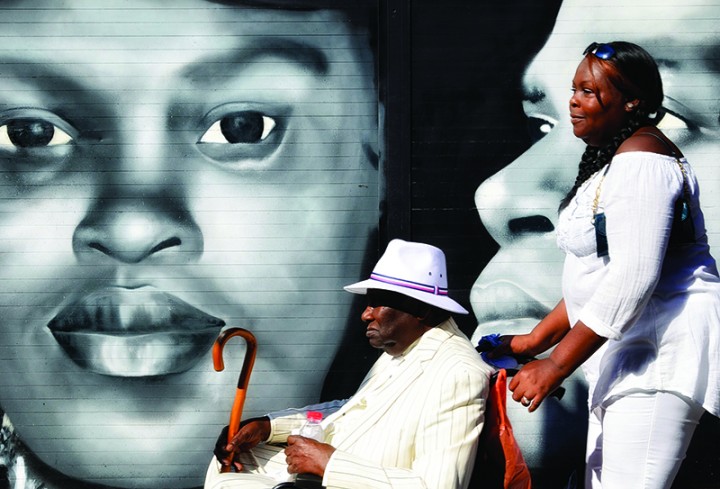 Linkedin
RELATED ARTICLES
OTHER ARTICLES
Photographer Becky Tyrell went down to the fading banger and stock raceway to meet a community desperate to keep it alive.
A recent High Court ruling against the right to wild camp in Dartmoor National Park sparked the largest land protest in history – and campaigners say their fight is not over yet.
Photographer Sean Maung reflects on documenting a small town in Pennsylvania afflicted by high levels of unemployment, poverty, violence, crime, and addiction.
After blocking the Scottish government’s gender recognition reform bill, Westminster is now devising further changes to the law to make it harder for trans people to self-identify.
At his West Bank restaurant, Fadi Kattan established himself as the voice of modern Palestinian cuisine. Now, he’s bringing his innovative, bold flavours to the UK’s capital.
Theo McInnes’s photos of the annual event provide an intriguing snapshot of contemporary Britain.