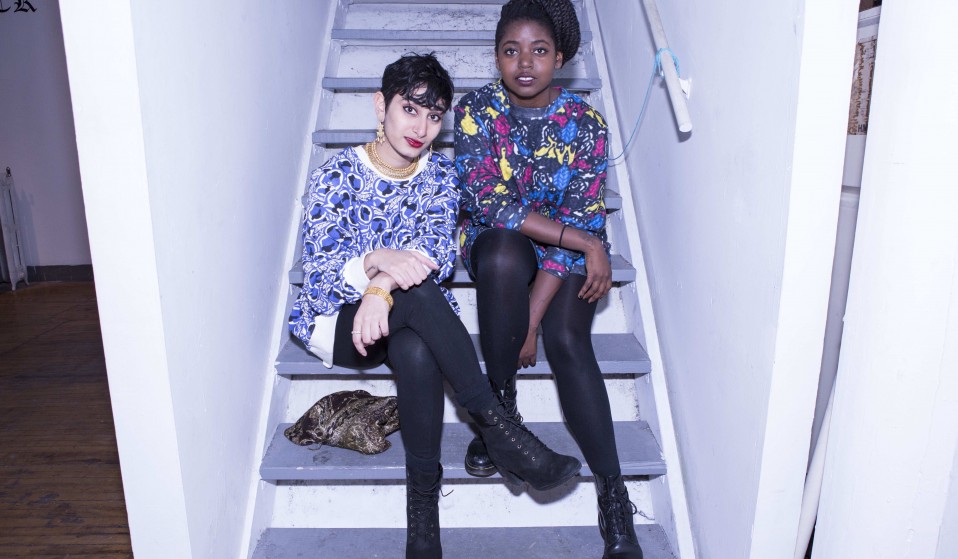 Television has two new kids in town. Chicago poet and performer Fatimah Asghar and filmmaker Sam Bailey have just launched their web series Brown Girls, which portrays queer people of colour in an artistic community in Chicago in complex, nuanced, real ways – something revolutionary in itself. The show follows the lives of Leila, a queer South Asian Muslim woman (played by Nabila Hossain), and Patricia (Sonia Denis), a black woman, as they navigate dating, friendship and work in the arts scene in Chicago.

While mainstream TV is getting more inclusive, with a plethora of excellent shows by filmmakers of colour on both sides of the Atlantic – from Atlanta to Insecure via Chewing Gum, and many more – it’s all still happening, in part, because of creators making it happen for themselves. We caught up with Asghar and Bailey to find out more.

Why did you decide to go for the web series format? The production values are fantastic compared to what we usually see in this format.
Sam Bailey: For me, making work for the web was initially my entry into filmmaking. For a long time I didn’t think I could be a director because the world of filmmaking seemed so daunting and out of reach for me. By making my own work and releasing it independently and straight to the audience – it really levels the playing field for content creators who may not have access to the traditional means of filmmaking (financial support, equipment, industry folks, etc).

How did you go about getting the funding?
SB: It was a deliberate choice in that we wanted to make the best version of Brown Girls possible. As a director, it’s always my goal to serve the story in the best way possible – and that includes web series. I still see it as an incredible platform for filmmaking. We got a small grant from Chicago Filmmakers and a little bit of money from Open TV (beta) – our distribution platform – but a big chunk of change came from people who donated through our GofundMe page. All in all, we made this entire thing on about 20k, favours and a dream. Everyone involved did it because they were invested in getting this story told and I think they were excited about being able to help tell a story that reflected versions of their own experiences. 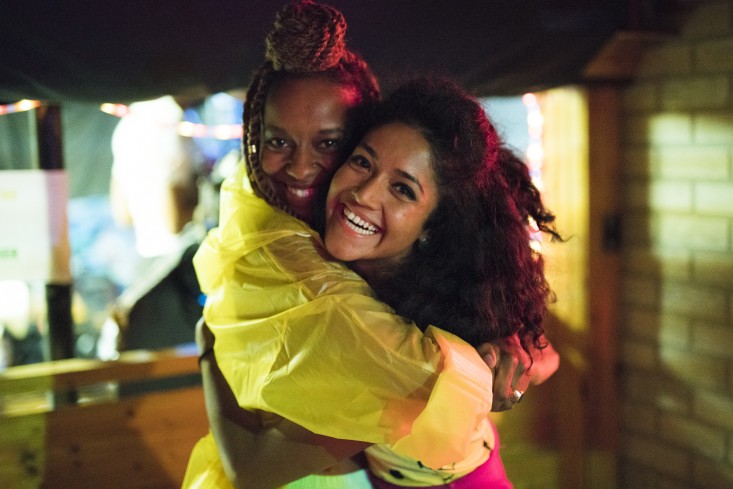 What or who were the inspirations behind Leila and Patricia? What was the process that went into creating them?
Fatimah Asghar: The show was loosely inspired by my relationship with my best friend, Jamila Woods – though neither character really embodies either of us personality-wise – as well as a handful of other friendships. I just created characters that I thought were interesting, and in some way alter-ego versions of myself and my friends.

There’s a moment in which Patricia’s mother says: “I’m not even going to begin to give you a lecture about what you don’t know about feminism.” Patricia obviously lacks self-awareness in that scene, but political values can also be a lifelong learning process. What were you trying to say with that scene?
FA: In that moment Patricia is trying to get the upper-hand in that argument by going through the lense of feminism, and her mom very quickly puts her in her place. I think it also in some ways speaks to a generational disconnect that happens. How many of us haven’t experienced saying something you think is going to win you the political argument and then being checked by an elder?

Both Patricia and Leila do that a lot – they blame things on race or feminism or whatever, when really sometimes the problem is just their own inability to commit to something or their own messiness. Political values are a learning process, but so is the distinction of when something is political and when something is your own issue. That’ s a really hard line to learn, and it’s in constant negotiation. 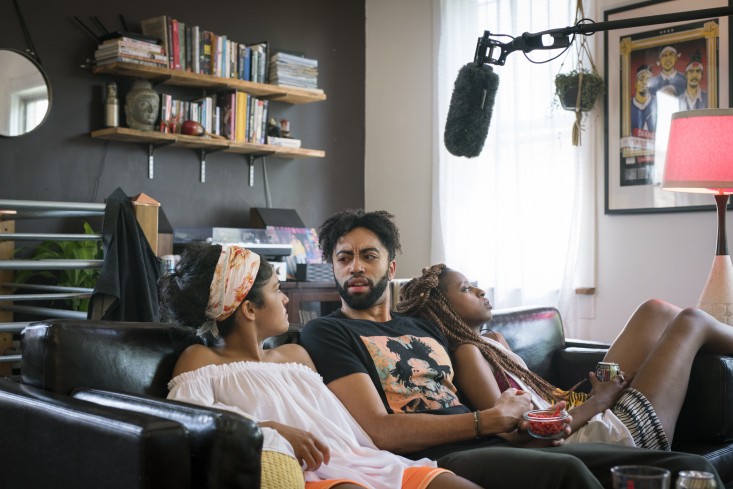 Obviously, your show does an important job in terms of representation. Do you guys remember the first time you felt like you were seeing yourselves represented on the screen?
SB: Probably the first time I saw Lauryn Hill in Sister Act 2. Everything about that role reminded me of myself and the girls I grew up with, from her mom not being a big fan of her art to just this dark-skinned sista with braids … I loved it. I wanted to be her so bad growing up.

FA: I remember being really excited when I saw the ads for Quantico and for Master of None. I thought it was really dope to just see people who looked like me, and to see Priyanka in a show, who I adore in Bollywood movies but which rarely make the crossover to Hollywood.

There’s been a lot of talk lately about how storytellers of colour actively choose to bypass traditional gatekeepers. What are your thoughts on that – and where do you see the TV landscape heading?
SB: I don’t know where TV is headed but it does look like the powers that be are a tad bit more trusting of their storytellers. I don’t think the stories that get highlighted in Hollywood will ever represent the world we live in if the tellers behind the camera don’t reflect the stories in front of them. With shows like Atlanta and Insecure and even Transparent, you see how the creators’ voices and points of views are very strongly embedded in the voice of the series and, in turn,  the audience is more invested in the journeys these characters are on. I’m cautiously optimistic that things will continue heading in that direction.

Were there other creators, artists or shows that especially inspired you guys?
SB: I really love Amelia Umuhire of ‘Polyglots’ and  Shaka King of ‘Newlyweeds’. I’m a huge fan of Atlanta, I think it’s a brilliant show. 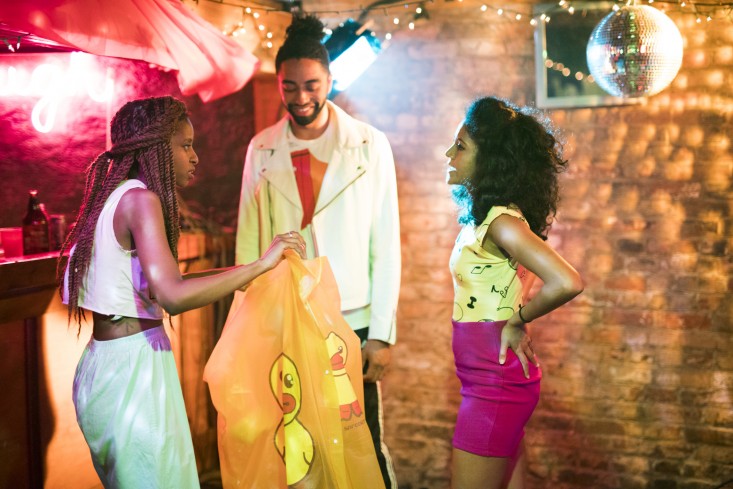 Have you been receiving feedback from viewers? If so, what’s been the most moving or memorable?
SB: We have been getting feedback and all of it is really moving. Mostly, we get people simply just saying “thank you” for creating the series because it’s the first time they’ve seen themselves reflected on the screen and that’s really powerful enough. We met someone at the Chicago screening who had driven four hours from Indiana I believe, by themselves, just to be there and be able to watch the show with like-minded individuals and that was really amazing to me.

Lastly, I’d love to know more about the Chicagoan artistic and queer communities of color that you have said the show is a “love letter” to. We have an over-saturation on our screens of artsy New York communities.
SB: Fati and I met in the Chicago artistic scene and I think it’s just a very mixed group of artists who are down to collaborate with each other if they fuck with your work. A lot of those people also happen to be queer, most are POC and, for me, they’ve become family.

The Chicago scene is really tight-knit but, in my opinion, it also has a very blue-collar, Midwestern approach to creating art which is to say: we love it so much you’re more likely to find us just putting our head down and making the work than having us talk about making the work. No matter what shitty weather we happen to be subjected to, everyone always seems to be on their way to a show or in tech or in rehearsal … It’s really powerful. The days that are hard to get up feel less so because the community is so vibrant and so hardworking, I feel bad if I’m not adding to the work being done.

FA: I love the queer community of colour in Chicago, as well as the artistic communities in Chicago. It’s very beautiful to be in those communities, I feel very seen and free. I think they are just making some of the best art I’ve ever seen. There’s a great spirit of collaboration there. And I echo Sam, when you’re making art in Chicago you are working. You are constantly grinding and hustling, and I think it’s really dope because it pushes you to be better.

Linkedin
RELATED ARTICLES
OTHER ARTICLES
The author discusses the all-consuming nature of heartbreak, and turning the experience into an incisive exploration of love and loss.
With inflation now at a 40-year-high of 9 per cent, demonstrations organised by TUC took place to demand action from the government.
LGBTQ+ students are keeping the spirit of the original Pride alive by fighting for liberation for everyone, not just their community.
Freddie Miller’s new series of photographs investigates who today’s trainspotters are and what drives their unfettered enthusiasm.
Wealth inequality and the rising cost of socialising is placing a strain on people’s relationships, reports Eve Upton-Clark.
Proposals to introduce a minimum GCSE threshold for student loans will disproportionately affect those from marginalised backgrounds.