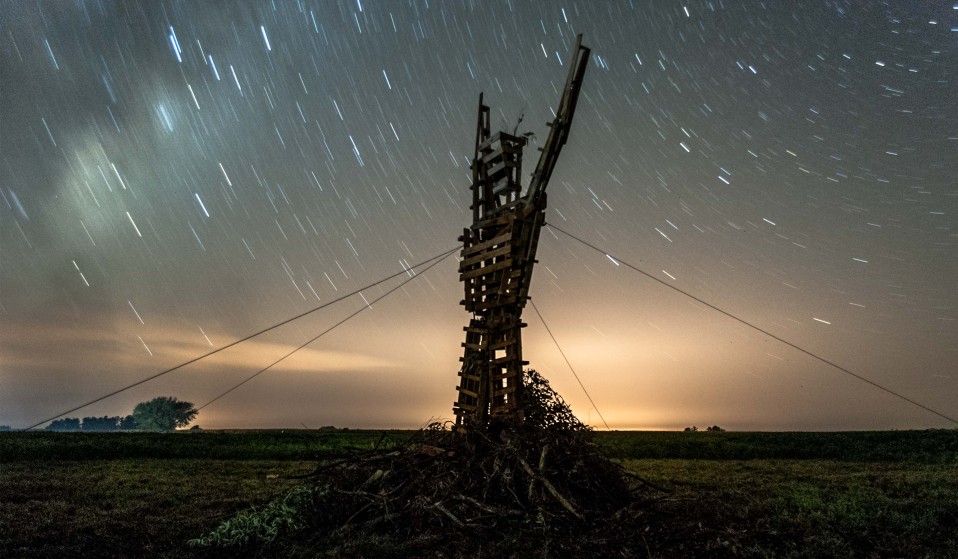 We spoke to festival co-founder Mauricio Matheus about recreating the Burning Man concept for the southern hemisphere, in a country gripped by a worsening economic crisis.

We spoke to festival co-founder Mauricio Matheus about recreating the Burning Man concept for the southern hemisphere, in a country gripped by a worsening economic crisis.

In the depths of winter, Nevada’s Black Rock desert, home to the iconic Burning Man Festival, is pretty inhospitable. But right now it’s mid-summer in the southern hemisphere and the lush plains of Buenos Aires, Argentina are ready for their own celebration of alternative culture and community, inspired by Burning Man’s guiding principles of radical self-expression, self-reliance, gifting and leaving no trace behind.

Now in its second year, the group behind AurourA Argentina (who are completely separate from Burning Man and not endorsed by the festival) wanted to create their own temporary space to celebrate art, creativity and bring people together who shared a common vision for a new positive social space in South America. The four-day event features cooking, swimming, parting, performance, rituals, and music from psychedelic rock to trash metal to acoustic, but most importantly, a “buena onda” throughout, an Argentine phrase that roughly translates as “good vibes”.

We spoke to co-founder Mauricio Matheus to find out more about AurorA and the challenges of translating the Burning Man concept to a country in the grips of a deepening economic crisis.

What inspired you about Burning Man and what made you want to translate the concept to Argentina?
We were really inspired by Burning Man’s rituals, the burning of the man, the temple and the ten principles that underpin the whole experience: radical inclusion, gifting, decommodification, radical self-reliance, radical self-expression, communal effort, civic responsibility, leaving no trace, participation and immediacy.

We love the idea of creating a space in Argentina where people can live a non-commercial experience, without sponsors, in the company of hundreds of other people, without prejudice or judgement. We wanted to create a place built with art, where love would be the main protagonist.

What’s your role in the project?
None in particular, we all helped out in any area we could. Last year was our first attempt to make this happen and we had to be ready to jump into whatever task needed to be done. From the very beginning, there have been very few of us involved in creating the project so that’s why there have never been specific tasks. We all took responsibility for how AurorA took shape.

How do you hope it will have an impact?
The idea has always been to create and experience Burning with our own rules and forms. Now that we’ve been able to make it a reality, we hope it will develop into an event for experimentation, action, art, love and respect. We hope it will allow people to visualise new ways of building, creating and relating to one another. We hope AurorA will help us bring a world we all desire onto the horizon.

What’s the existing Argentine festival scene like?
There are lots of very small festivals like AurorA alongside other bigger, more commercial festivals where the main focus is music. Our idea is to take advantage of the growing popularity and importance of festival culture both nationally and worldwide to help make AurorA into something unique and an unmissable date for anyone who wants to participate in an authentic community experience.

Who’s involved in Aurora and what does everyone do?
AurorA has different levels of involvement and participation, we have those who helped give birth to the idea, people who volunteer and the participants themselves. In essence, the organisation only exists to give people the tools and environment to make amazing things happen for themselves through the interactions they have with each other.

How can people get involved/show support?
From the beginning we’ve always tried to communicate as much as possible and bring people into the process by creating spaces for action inside and outside the event. Part of our leitmotif has always been to collaborate with active people who are looking to make things happen, build things and not just stay sitting around. On the contrary, we want people who are eager to change their realities and make something new. Whoever isn’t up for that challenge won’t appreciate AurorA.

What have been the challenges in bringing Aurora to life?
The biggest challenges have always been the same: gaining acceptance for this type of event and the economic cost for the participants. The acceptance is directly related to the understanding of what we’re searching for with AurorA and what the idea of this temporary community means. Communal work and the artistic presentation are also big challenges. Creating a sharing economy and a radically self-sustaining community is really difficult in a country like Argentina where high inflation makes everything more expensive each day. These are all challenges in creating a new story and walking a path untrodden in our country but it’s a task which excites and inspires all of us.

What’s the future for Aurora?
The future of AurorA is all on the horizon, it’s part of our profound desire to create fundamentally pro-active and more dynamic social spaces. We’ve been working on the second edition, AurorA 2015, for a long time now and we want to create a better experience and improve on what came before. We’re hoping to be more focussed in the creation of the event and in our way of thinking about it. We also want to generate a community that exists beyond the four days that the festival takes place. We want to create a community that understands and accepts the pillars of social construction: respect, love, collective participation and the constant challenges of searching for general wellbeing.

Linkedin
RELATED ARTICLES
OTHER ARTICLES
Campaigners reflect on what the supreme court’s decision to allow buffer zones in NI means for the future of reproductive rights in the UK.
From snake handlers to mardi-gras revellers, Tom “TBow” Bowden’s photos provide a snapshot of the wonderful and weird people who make up America.
After fleeing the war in Ukraine, people are finding it impossible to secure affordable and decent housing in the UK.
After building his reputation covering the US civil rights movement in the 1960s, the photographer went on to produce some of the most enduring images of the past century.
After blocking the Scottish government’s gender recognition reform bill, Westminster is now devising further changes to the law to make it harder for trans people to self-identify.
A new film from Berghaus traces the story of Adam Raja, who left behind a turbulent upbringing to discover the healing power of climbing.