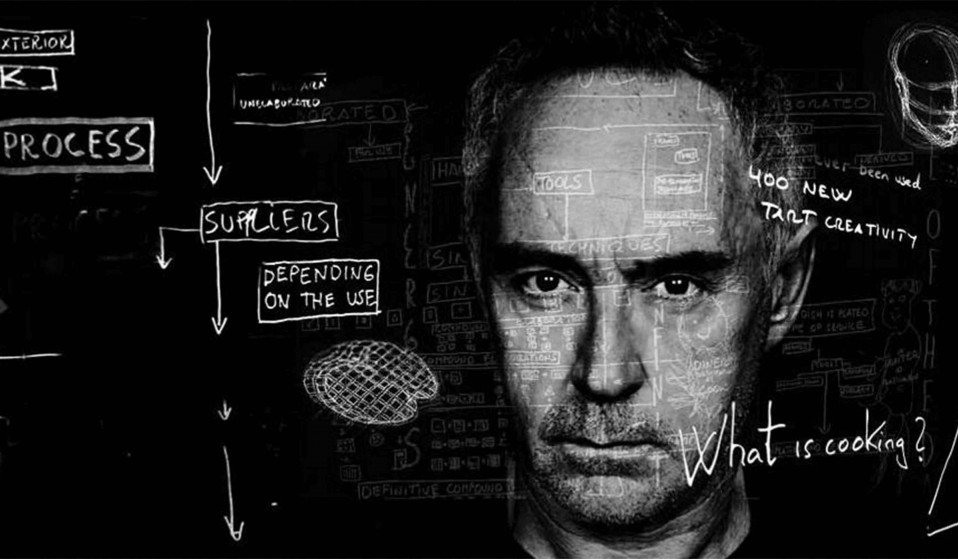 Ferran Adrià, the genius behind El Bulli, wants to inspire us to place creativity and innovation at the heart of everything we do.

Ferran Adrià, the genius behind El Bulli, wants to inspire us to place creativity and innovation at the heart of everything we do.

Catalan chef Ferran Adrià is equal parts artist, mad scientist and gastronomic genius. During his time in charge of El Bulli, he shattered the rules of the kitchen, drew on molecular gastronomy to turn food into culinary foam and won the title of world’s best restaurant — five times. After creating 1,846 truly unique one-off dishes, he shut the restaurant’s doors in 2011 out of a fear of repeating himself and has since embraced the role of creative visionary. In a recent profile in The New York Times, Adrià declared that he wants to share the inspiration he draws from food to inspire the world to innovate.

For Adría, creativity and innovation is the essence of cooking. Food is constantly evolving and cross-pollinating. You can see it everywhere from El Bulli’s haute cuisine all the way down to street food vendors who ply their trade from Kolkata to San Francisco to Buenos Aires. Walking the streets and sampling the variety of smells that fill the air is a great way to judge any city’s creativity. For example, the most obvious reflection of London’s vibrant multiculturalism is through the kaleidoscope of colours and flavours produced when cooks from around the world rub shoulders, sharing ingredients and ideas.

Adrià once spent eight months trying to “understand” lettuce and achieved his superstar status by breaking down cooking processes and ingredients — but most importantly our established ideas and preconceptions about food — to reconstruct them in pioneering new ways. Adrià is passionate that his revelations at El Bulli are relevant far beyond the kitchen. Through his new El Bulli Foundation, he aims to interrogate the art of innovation and “us[e] cooking as a language [to] interact with other disciplines, such as: design, science and architecture.” Adrià’s ambitious mission is to inspire people in all walks of life to ignore preconceived ideas about what’s possible, think differently and place creativity and innovation at the heart of everything they do.

“Don’t think of the watermelon as a watermelon,” Adrià told Esquire in 2011. “Think of it as a tomato. From this point, then, cook it. It’s very fleshy fruit. Obviously, you need to have a big piece. Prepare your tuna and, instead of rice, complement it with the watermelon.”

Adría often repeats the phrase: “Now we will eat knowledge,” according to staff at the foundation. Despite his achievements, a hunger to learn more about his craft motivates him to keep pushing forward. “I leave here every night thinking I know nothing about cooking,” he told the NYT. “That is powerful.”

“You may say, ‘Oh, no. You can’t touch a traditional recipe.’” Adría told Toronto Life in March. “But we ask: why can’t you? Back in 1350, a vinaigrette was a stew, so we ask, why not? This can be applied to any kind of cooking, and that’s the shocking part of it. It kind of bends all the traditions. It’s a good thing.”

4. Go with your instincts

Adrià’s relentless search for revolutionary dishes and the resources he put into research meant that El Bulli struggled to make ends meet for most of his time in charge. But he didn’t measure success in financial terms, numbers of diners served or any other metric. Instead, going with his instincts is enough to feel he and his team are on the right track. As he told the NYT: “We will know if we are doing well because we will feel it.”

To find out more about Ferran Adrià’s work head over to El Bulli or check out Gereon Wetzel’s documentary El Bulli: Cooking In Progress.

Linkedin
RELATED ARTICLES
OTHER ARTICLES
In the latest instalment of Photographers in Conversation, the chronicler of raves, protests and beyond explains why he’s drawn to such specifically visceral environments.
Wealth inequality and the rising cost of socialising is placing a strain on people’s relationships, reports Eve Upton-Clark.
Photographer David Hoffman recalls documenting the extreme wealth inequality around Tower Hamlets and Hackney int the 1980s.
Freddie Miller’s new series of photographs investigates who today’s trainspotters are and what drives their unfettered enthusiasm.
A new edition of a seminal book brings together iconic images of the band onstage in their full glory and backstage in moments of unguarded camaraderie.
Proposals to introduce a minimum GCSE threshold for student loans will disproportionately affect those from marginalised backgrounds.