Art & Culture / Can Netflix help in the fight for Palestinian liberation? 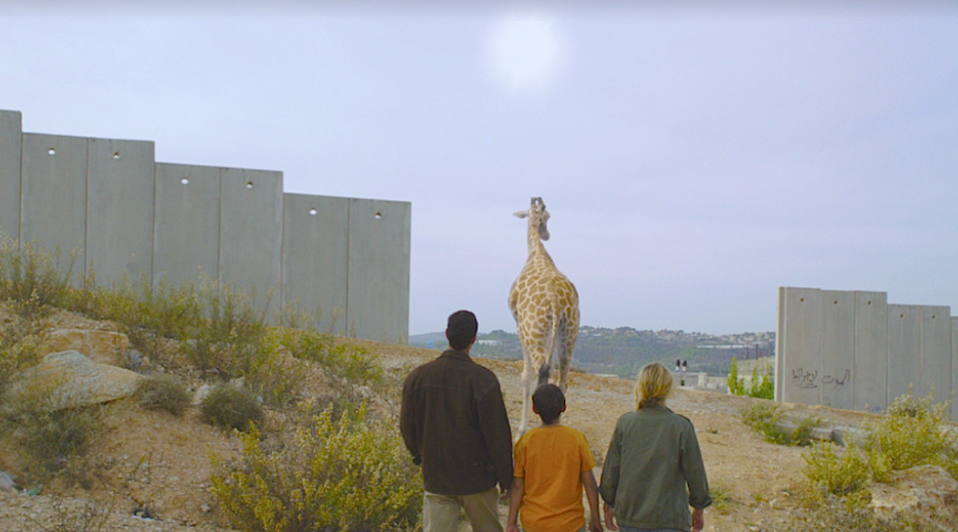 The release of Netflix’s Palestinian film collection is worth celebrating, but the behemoth should go further in its support.

Earlier this year, Netflix released a collection of 32 films dedicated to sharing Palestinian stories. While this is worth celebrating, the behemoth should go further in its support, writes James Greig.

This October, Netflix released Palestinian Stories: a collection made up of 32 feature-length dramas, documentaries and short films either helmed by Palestinian filmmakers or about Palestinian stories. This is a welcome development, which represents a significant boost for Palestinian cinema. But there is still a great deal more that Netflix – and other media companies like it – could be doing to support cinema in a country which faces immense barriers to cultural production.

As you might expect, the collection features no shortage of hard-hitting films about the brutal reality of life under occupation. Farah Nabulsi’s BAFTA-winning short film The Present (2020) follows a father and daughter attempting to buy an anniversary gift (a fridge) in the occupied West Bank, only to find themselves frustrated at every turn by the checkpoint system and the arbitrary power of the soldiers who enforce it. But there is also some lighter fare: take Maradona’s Legs (2019): a ‘90’s-set short film about two young boys on the hunt for a football sticker, or Giraffada (2013), which concerns a father and son going on a journey to find a giraffe for a West Bank zoo. Some eschew gritty social realism in favour of experimentation: interdisciplinary artist Larissa Sansour’s In Vitro (2019), an art film set in a futuristic Bethlehem which has been ravaged by an ecological disaster, uses its sci-fi conceit to explore themes of memory, exile and national identity to great effect.

The release of Palestinian Stories comes amid a particularly turbulent year in the region. Last May, Israeli airstrikes and artillery fire reportedly killed 248 people in Gaza, while 12 people in Israel were killed by fire from Gaza. According to Medical Aid for Palestinians, over 29 health facilities were damaged or destroyed during the bombardment of Gaza. Images and footage of the destruction of Gaza – and the assault of unarmed Palestinian protesters in Jerusalem and within Israel – were shared widely. As a result, large demonstrations in solidarity with Palestine were held across the world, and a number of high-profile figures and mainstream US politicians issued statements of support. It’s perhaps too early to say whether this upswell in Palestinian solidarity will be maintained, or lead to meaningful change, but it’s notable that this is the context in which Netflix has decided to release this collection.

Palestinian Stories hasn’t been met with unanimous acclaim. Netflix has faced criticism in the right-wing Israeli press for platforming directors who support the Palestinian-led movement promoting boycott, divestments and economic sanctions against Israel, widely known as ‘BDS’. (The BDS Movement has attracted support among civil society worldwide – from trade unions to artists – and the likes of Amnesty International has called out attacks on boycott activists by the Israeli government and its allies.) Elsewhere, Palestinian director Bilal Yousef argued in the Israeli newspaper Haaretz that the collection fails to include work depicting the concerns of Palestinian citizens of Israel – a demographic who face their own distinct challenges. But for the most part, it appears to have been well-received among people involved in Palestinian cinema and beyond.

For Farah Nabulsi, director of The Present and a human rights advocate, the move from Netflix is significant. “It’s the audiences and reach that some of these films will have now – and the impact I hope the films themselves will have on those audiences – that excites me,” she tells Huck. “I also think this lends encouragement for Palestinian cinema and filmmakers who have so many stories to tell and a lot to contribute not only artistically and culturally, but also toward our own narrative, that has often been misrepresented or underrepresented on the screen.”

Palestinian Stories might be a good start, but what else could Netflix do to aid Palestinian filmmakers? “It’s probably best looked at on an individual basis rather than as a monolith,” says Roua Naboulsi, festival events coordinator at the London Palestine Film Festival. “Films have been produced in Palestine, by Palestinians and others, for over 100 years, creating a very rich and diverse pool. So what media companies can do is continue to screen films, but also fund them and support them in the same way that anyone who supports filmmaking should do.”

Sansour agrees that funding new films is key. “With the likes of Netflix having the means to support, or even single-handedly fully-fund new projects, it would be great to see a large-scale investment in Palestinian film, giving both emerging and established directors an easier pathway to telling their stories,” she says.

While there is no shortage of local talent, filmmakers in Palestine face some unique challenges. “There is no ‘film industry’, so to speak of,” says Sansour. “Local funding opportunities are non-existent, and regional funds are very limited. Most Palestinian films are either financed abroad, with fierce competition from other international projects, or forced into low-budget formats.” Beyond funding, filming on location in occupied Palestine presents a number of practical challenges. While shooting The Present, Nabulsi found a way of using some of these to her film’s advantage. An early scene was filmed on-location at the infamous Checkpoint 300 near Bethlehem where, as she describes it, “thousands of Palestinians pass through every morning like cattle in a battery farm”.

The scene’s only fictional aspect is the inclusion of the film’s protagonist, Yusef (Saleh Bakri); everyone else on-screen is a real person “being humiliated in actual fact by a real military who were just around the corner”. Because Nabulsi hadn’t asked for permission (“Who has the right to give or refuse permission to film such a monstrosity?” she asks), the shoot was a risky endeavour. They went in documentary, guerilla-style, with two camera men, no lighting, and a tiny crew, in the hope of avoiding the attention of the Israeli military. The resulting scene is uncomfortable to watch, but electrifying in its veracity.

“At its essence, the film is about the basic right of freedom of movement,” says Nabulsi. “I wanted to convey that such an existence – such a cruel and absurd, racist, discriminatory reality – is not right, and for audiences to ask themselves if that is the kind of reality they would accept for themselves. And if the answer is ‘no’ – then why should Palestinians accept it?”

While it marks a huge step forward that Netflix has made such frank depictions of the occupation widely available, this has to be viewed within the larger context of the platform’s programming. This includes Mossad 101 (2015), a thriller series about Israel’s intelligence service, and Fauda (2015), a series billed as a ‘Netflix Original’ which concerns a counter-terrorism agent coming out of retirement to hunt down a Palestinian terrorist. Fauda has received critical acclaim internationally, but it has also drawn criticism for propagating anti-Palestinian racism. Writing in Jewish Currents, Mitchell Abidor argued that Fauda is not “a humanising portrayal of Palestinians, but rather is quite clearly aimed at solidifying an Israeli image of them as cowardly beasts who must be dealt with by any means necessary”.

“The most terrifying thing about Fauda to me is how detached from reality it is,” Noah Kulwin, a writer and the co-host of Blowback, a podcast about the history of American imperialism, tells Huck. “Fauda distorts the way that Israeli military and intelligence actually entrenches its control over Palestinians with such ‘agents’, which is primarily through the use of informants. Blackmail, threats of violence, and ever-present freedom of the Israelis to throw Palestinians into prison without cause on the basis of ‘administrative detention’ [is what enables] the ‘intelligence’ that Fauda’s real-life counterparts seek. It is an evil, corrupting business, which Fauda depicts as noble.”

In this sense, the release of Palestinian Stories does not necessarily counterbalance Netflix’s willingness to showcase content which undermines the Palestinian cause. We should also be wary of mistaking increases in visibility for advances in freedom, because the two don’t always go hand-in-hand – as the history of just about every progressive movement, from trans liberation to Black Lives Matter, makes evident.

Ryvka Barnard, Deputy Director of the Palestine Solidarity Campaign, says that while she believes Netflix releasing Palestinian Stories is something to be celebrated, it must not distract from the political work that urgently needs to be done. “Representation [can become] a double-edged sword: on the one hand, it gives new visibility to the Palestinian struggle, but on the other hand, it can get pointed to as progress in a way that makes it harder to raise alarm bells about shrinking political space,” she says, citing the fact that Israel has recently criminalised a number of Palestinian civil society organisations, including human rights groups.

In any case, Palestinian cinema has a value beyond its political utility, and it’s arguably doing these films a disservice to view them solely through the lens of protest, rather than as art in their own right. “As a film festival,” says Naboulsi, “we want the cinema to be taken seriously and not reduced to a cinema of occupation. As the acclaimed Palestinian director Kamal Aljafari once said: ‘Cinema has the potential for crossing checkpoints.’”

Moving forward, it will be interesting to see how this recent upsurge of visibility for the Palestinian cause is reflected by a new generation of filmmakers. Hopefully, they will be afforded more support than their predecessors.

At the end of The Present, Yusef tries to take the fridge he has bought through a checkpoint, only to find that it’s too large to fit through the narrow passage. While there is a road immediately beside it, the soldiers will not allow him to use it. As Yusef begins to break down and shout at the soldiers, his young daughter takes the fridge and calmly, defiantly wheels it along the road right past them. It’s a rousing ending, although one which Nabulsi herself is quick to admit is implausible.

“Very often the realistic outcome of a situation like this would be deadly force, physician injury or arrest,” Nabulsi says. “But I wanted to offer an alternative, something more hopeful. I decided the ending would carry with it the suggestion that it is the next generation of youth (in this case, a young girl) that is coming out stronger and taking control. Because despite my attraction to the darker side of storytelling, I am a woman firmly fixated on hope. I don’t think I would be able to do the work I do without it.”

Linkedin
RELATED ARTICLES
OTHER ARTICLES
On the fifth anniversary of the tower fire, around 18,000 joined the walk to remember the 72 dead and to demand justice.
A new edition of a seminal book brings together iconic images of the band onstage in their full glory and backstage in moments of unguarded camaraderie.
The past five years have seen a staggering increase in foodbank usage across the UK. Now, staff fear things are set to get much worse.
Freddie Miller’s new series of photographs investigates who today’s trainspotters are and what drives their unfettered enthusiasm.
The last few years have seen an increase in LGBTQ-led initiatives to feed the hungry, with many finding ways to stay afloat despite the challenges.
Photographer Arthur Grace recalls travelling through the Soviet Bloc and finding ways to evade the surveillance of his work.