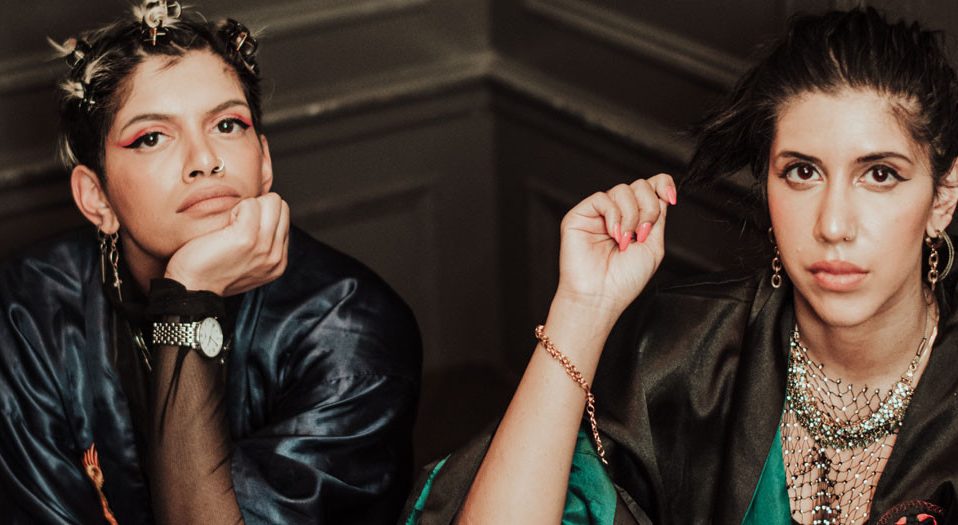 The rap duo discuss finding their feet in an industry dominated by men, and why a salacious sense of humour is at the heart of everything they do.

The Chennai-born, Calgary-raised rap duo discuss finding their feet in an industry dominated by men, and why a salacious sense of humour is at the heart of everything they do.

“We’re not seeing the female equivalent to a JPEGMAFIA or a Death Grips in hip hop right now,” argues Bhagya “Eboshi” Ramesh, one half of Chennai-born, Calgary-raised rap duo Cartel Madras. “You are not seeing enough women do weird shit, because they’re forced to take themselves so seriously!”

In a world where male artists can look however they want and experiment freely with little to no backlash, Cartel Madras are trying to level out the playing field. “There’s this constant pressure for women in rap to look hot all the time,” Eboshi explains. “We like to be hot sometimes, but we don’t mind looking like shit either. Creating sounds people haven’t heard before is the biggest priority.”

Eboshi and sibling Priya “Contra” Ramesh create queer-friendly trap that plays out like a revolution on the dancefloor – the two sisters’ adventurous records shift between the rush of dropping MDMA (‘Housey – Thirsti Thots to the Front’) at a rave, where the dress code is strictly Vogue-era Madonna, and fucking up the party by firing warning shots at the ceiling (’Dawood Ibrahim’).

Signed by Sub Pop after being spotted by Shabazz Palaces’ mastermind (and A&R) Ishmael Butler during one of their first live performances back in Summer 2017, Cartel Madras have developed a vibrant aesthetic on the legendary label, with self-directed music videos that reference everything from cyberpunk to vintage Brian De Palma movies.

Equipped with an irreverent sense of humour (‘The only white in my house is some blow’ jokes Contra on the twisted ‘Jumpscare’), the sisters tell me they’re tired of artists who look like them being marketed by major labels in a way where they’re defined solely by trauma and struggle. “We want to put out the opposite energy,” Contra explains. “We’re from South India [the Indian State of Tamil Nadu], so there’s lots of revolutionary female freedom fighters you hear about growing up. It means we subconsciously tap into the rebellious energy of all those strong women.

“The ‘Goonda Gold’ music video was actually inspired by an old photo of female fighters in the Tamil Tigers,” continues Contra.”But sometimes we like to find ways to channel their energy on a song about, like, twerking in the club.” The duo’s new EP, The Serpent & The Tiger, the third release in their Project Goonda trilogy, continues a hot streak, resulting in one of the most underrated rap projects of 2021. The record shows growth over its predecessors by revealing some doubts behind the duo’s trademark bravado.

On the wavy ‘Lavender Nights’, which will please anyone who wants music to revert back to the exuberant club rap sound of Azealia Banks’ classic Fantasea mixtape, Eboshi makes a frank admission: ‘Looking in the mirror used to make me sick / Wasn’t myself, had to leave that quick’. She says of those bars: “They’re important because they hint at the people we used to be before we transformed into Cartel Madras! It is important to show both our highs and lows.”

Referencing the new record’s apocalyptic highlight ‘DEEPINTHEJUGLE’, where the bar “Appetite for destruction and I’m always starving” seems to serve as a mission statement for the group’s ethos, Eboshi concludes: “We want to destroy the narrative artists like us have traditionally been given and tell brand new stories. Cartel Madras has a constant desire to fuck shit up and carve out our own path. We’re just at the start of our journey.”

Why is it so important Cartel Madras is defined by having such a salacious sense of humour on these songs?

Eboshi: We like to laugh a lot. We’re sarcastic people! Sometimes we like to insert really witty, irreverent humour into songs, but it’s also important to try to be as stupid as possible. Diaspora artists, regardless of their background, are often pressured into being either totally serious or just plain traumatised. We don’t need to do that. Life is tough and we both believe in humour.

Contra: The algorithm forces you to make music a certain way now. I see that with how people choose beats or even just the structure of their songs; they clearly want to be picked up by the Rap Caviar playlist! It’s pretty whack to think how fucked up that is to someone’s creative energy. We’re all about doing it our own way.

I’ve noticed interviewers like to ask you about M.I.A. a lot. Can that feel a little reductive?

Eboshi: There’s two things going on. One, there’s been a vacuum of South Asian women in Western media since M.I.A. – who was obviously this cultural phenomenon – emerged. It means people don’t know who else to compare you to. But yeah, on the other hand, it can also feel absolutely reductive, lazy, and dumb. It isn’t even just M.I.A. — we get lumped into categories with women just because they’re also brown and making music. Look, there’s over a billion of us… we don’t need to be framed like we’re all making the exact same thing!

Contra: It’s especially annoying [when those comparisons are made] because our opinions and what we try to do is often in opposition to people in the diaspora. It’s like… we have different politics, my G.

Eboshi: Exactly. I guess people might expect two female Indian rappers to complain about how they’re overlooked by the West or why life is difficult. Family pain certainly comes out in our songs, but it’s important to have fun. 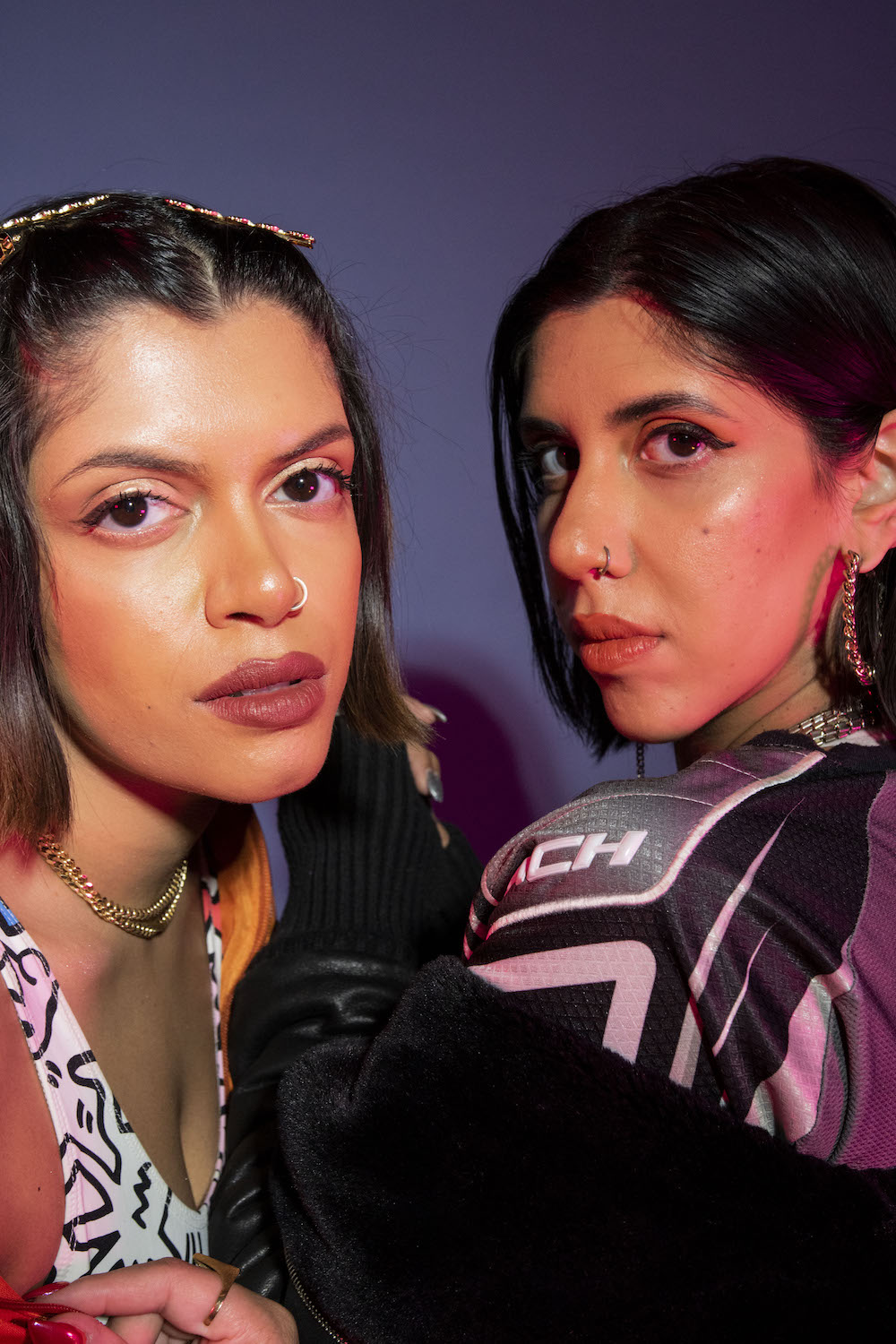 Did you both feel like outsiders growing up? Moving from India to Canada must have been a bit of a shock to the system…

Contra: You land somewhere really straight like Calgary and it’s immediately clear you need to make something of yourself, just so you can break away [from all the suburban conventions]. It leads to you being the weirdo as a kid.

Eboshi: Even when we were able to assimilate to the dominant culture of being a Calgarian, we still felt very different. We didn’t want to ever become the white-washed Indian people, who are comfortable exclusively chilling among white people. Even though we could be chameleons, we had a desire to stay true to our roots and to be different from everyone else, whether that was clothes or how we would present ourselves! We’ve both been writing since we were small and we’d write these corny-ass raps together. It really came together in the Summer of 2017, when we decided to put some shit out on Soundcloud.

Contra: That’s when we put all our stuff online! That summer had such a frantic energy. We were doing a lot of fuck shit. There were a lot of drugs. We were in this crazy moment where it felt like we had to do the music thing or we were going to die. It was a do or die energy. Like, it doesn’t matter if we fail, let’s just see where this takes us!

So many weed anthems are rooted in male experience, making it refreshing to see stoner culture from a female lens on ‘Drift’. Are you encouraged more generally by how women in rap are flipping the male gaze and owning their sexuality more freely in the 2020s?

Eboshi: On ‘Drift’, my verse is harder than the song requires. I liked the idea of throwing out some tongue twisting shit, which references Cornac McCarthy and coming off my meds, on more of a stupid kind of song. I liked that juxtaposition. When it comes to the question of whether we’re making progress, I mean, I think there’s still a long way to go.

So much of how women are rapping about men as sex objects right now is just a reaction to how men have been writing about women over the years. I don’t know, I just feel like we should all be pushing our imaginations further. Let’s not just be like: ‘Wow, girl boss!’ Or rap: ‘I am going to peg him!” [like it’s a t-shirt slogan]. As women, we have to evolve faster than just imitating what men have historically been doing or saying. We need to remember that we’re more clever than that!

For people who have never heard Cartel Madras before, why should they check out The Tiger and The Serpent?

Contra: With this record, a big theme is switching between being the hero and the anti-hero. You can be both. In fact, you often have to be both just to survive in this world. With a song like ‘Fear & Loathing’ we wanted to tap into the decay of human consciousness, but still find a way to make it sound fucking crazy, you know? Living life right now is a lot like watching Tenet over and over, and being stuck in this crazy loop. These songs are all about escaping that loop. On the first half of the record there’s this tension and an exhaustion about the anxieties of the world, but that evaporates on the second half. It’s like: the world is ending, so we might as well go out with a bang, right?

At the start of this call, we spoke about Freddie Gibbs. He’s a rapper’s rapper. Dude is really rapping for his life, but doing it with so much finesse, style, and it’s never corny. That’s the music we want to make. Why can’t two sisters from South India have that Freddie Gibbs energy?

The Serpent & The Tiger is out now on Sub Pop Records.

Linkedin
RELATED ARTICLES
OTHER ARTICLES
Jeffrey Henson Scales intimate portraits and protest images of the BPP and its leaders offer a rare insight into organisation at a time of societal upheaval.
A new podcast is opening up the conversation between trans women and trans amorous men in the hope of building coalitions.
Taking us through one of the most dynamic years in recent history, Laylah Amatullah Barrayn new photo book contains tender yet confrontational portraits.
Photographer Sean Maung reflects on documenting a small town in Pennsylvania afflicted by high levels of unemployment, poverty, violence, crime, and addiction.
After building his reputation covering the US civil rights movement in the 1960s, the photographer went on to produce some of the most enduring images of the past century.
From snake handlers to mardi-gras revellers, Tom “TBow” Bowden’s photos provide a snapshot of the wonderful and weird people who make up America.