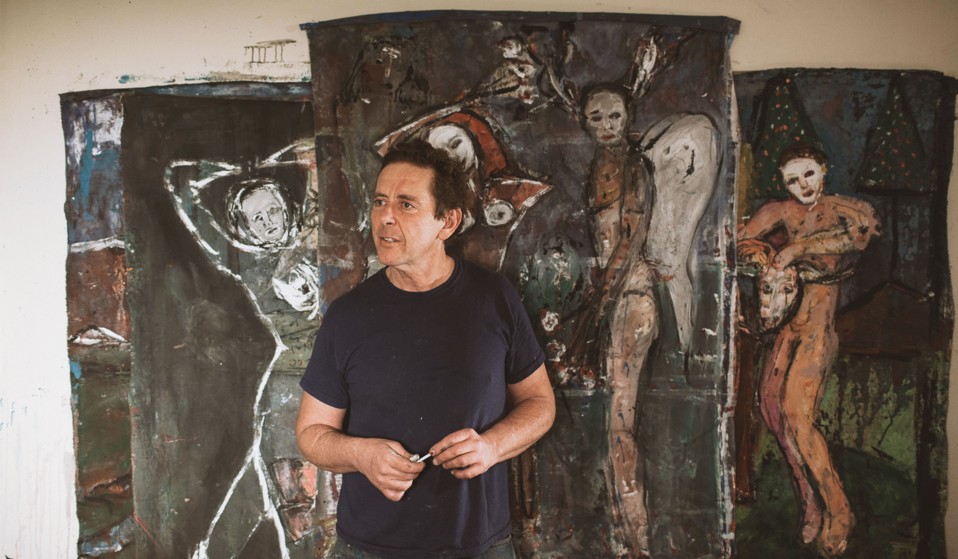 Artist and writer Chris Wilson educated himself on the mean streets of 1980s San Francisco, landing in prison when he was sixteen. Change, he says, is not a single turning point. It’s something you channel and work on for life.

Artist and writer Chris Wilson educated himself on the mean streets of 1980s San Francisco, landing in prison when he was sixteen. Change, he says, is not a single turning point. It’s something you channel and work on for life.

Walking into Chris Wilson’s Brixton studio is stepping into cluttered chaos. It has the manic brilliance of a Francis Bacon, with god-knows-what splattered over every nook and cranny. Every surface is littered with emotional debris – drawings, photos, slips of paper with scribbled quotes and yellowed newspaper clippings; images of god, death and other esoteric references that are the missing pieces of his life. But there’s also a serene vibe.

The muffled sounds of kids working the South London council estate playground below occasionally interrupt the quiet, soundtracked by the loud purring of Tufty the Persian cat. But Chris doesn’t care because he’s focused on his newest book, The Glue Ponies,  a collection of short stories about the rough life all told from the hustler’s POV. Like his paintings, Chris’s stories are windows into the past, the kind of fucked-up tragedies that make good page-turners. His last effort, a memoir called Horse Latitudes, was given a limited run and they sold like hot cakes. He has that rare quality, the ability to tell a story as an insider, unashamed, honest and without the usual clichés that ruin so many good things.

“Tiny things help me,” he muses while checking his hand-rolled cigarette, scraping cobalt from under his thumbnail, the tiny roach smoked to the nub threatening to burn him. “Because change happens on a quiet level inside your heart as a feeling of despair that builds and builds until something needs to be done. For me it was creativity and cutting out the dead world I inhabited. But it’s not far behind me, that land of hungry ghosts.”

Speaking of ghosts, Chris hands me a dog-eared, paint-stained copy of Horse Latitudes. It’s totally fucked-up, but that only adds to the mystique. In it Chris paints a picture of a stranger in a strange land – a kid with a British accent banging junk in the 1980s, in the Mission and Tenderloin, San Francisco. I used to skate and shoulder tap there as kid: the area was no joke. Teen hustlers, hookers in bathing suits with fur coats, and drug paraphernalia as far as the eye could see. Chris captures this Frisco for posterity. He knows that no one really gives a rat’s ass about a former-addict’s plight unless it’s revealed as a romantic adventure through the once-mean streets of today’s hot rental market and pop-up brunch spots. 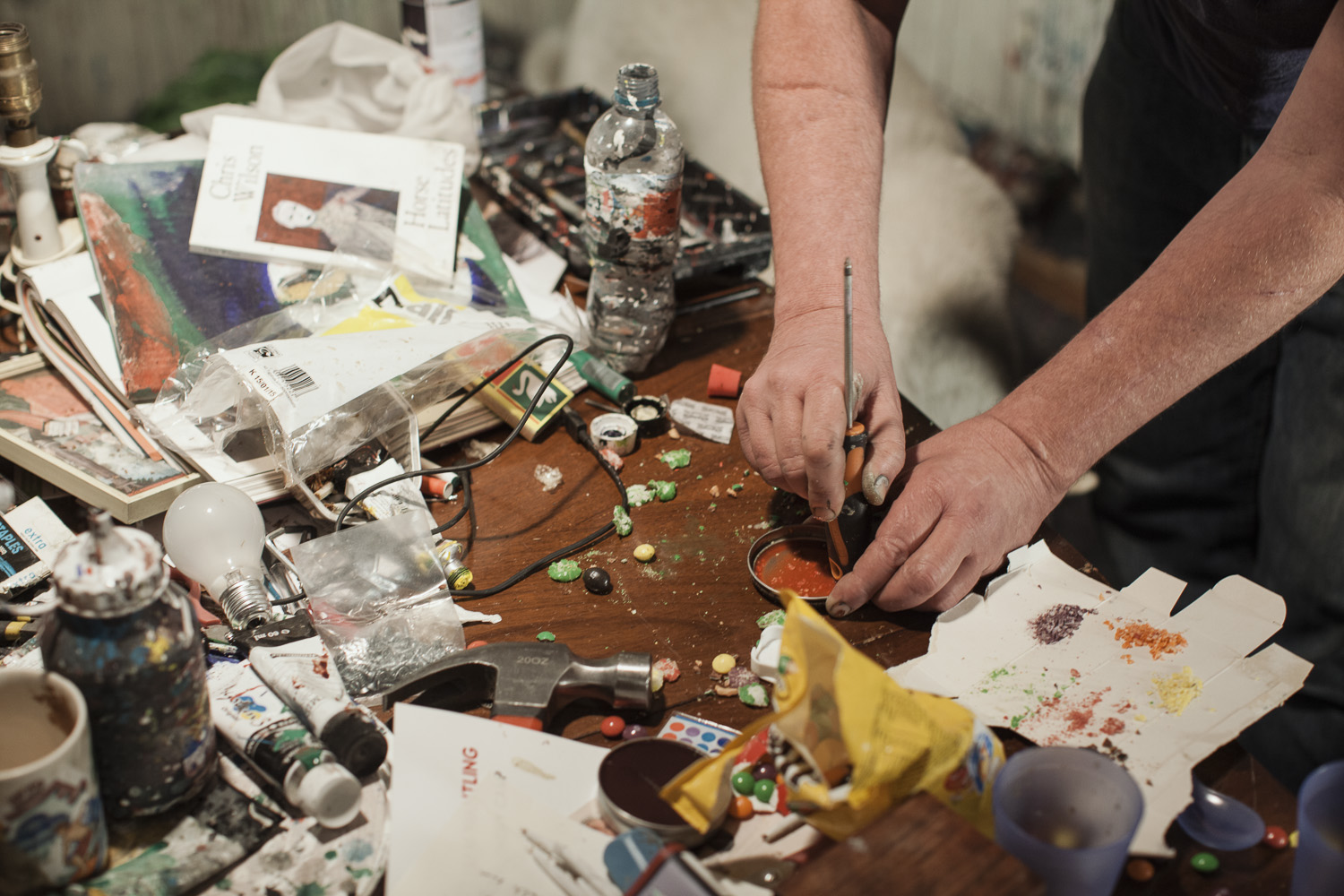 But to know Chris is to understand how he got here. Born in Newcastle-Upon-Tyne, he lived in Ghana and Tanzania until he was ten and then his family relocated to California. But once they hit the Golden State things fell apart: his parent’s split and his dad had a mental breakdown. Chris ran and didn’t look back, finding a new home in punk. “The ’80s scene was Mabuhay Gardens, I-Beam and the music was Flipper, the Dicks, Fuck Ups and Dead Kennedys. I was in a couple bands – these were good times. Drugs were a part of it, but the music had enough guts to pull me through.”

But the good times didn’t stick. “Because dope won,” says Chris. As an addict he was cut-off, lost and on a collision course to hell. “At sixteen I got done in a stolen car and my dad left me in the county jail to teach me a lesson for stealing. It was a slap of fresh air, things were over.”

Eventually, all roads led to San Quentin State Prison. Because of the stringent re-offending laws it didn’t take much, just the usual nonviolent infractions that wayward teens partake in, like stealing designer jeans at an inland California strip-mall and unloading them to a fence (a secret location that trades in stolen goods). This usually occurs behind those tasty taquerias that have made the Mission the go-to place for foodies these days. As he likes to point out, “The difference between you and me are bad decisions.”

But the devil’s in the details; to be shut away in the most infamous prison in the world is an education in itself. San Q is the only state pen in California with a death row. The notorious Satanist and serial killer Richard ‘The Night Stalker’ Ramirez was supposed to get 86’d there before he died prematurely of liver cancer. Chris was there. “They actually say, ‘Dead Man walking!’ as a condemned man is lead to the gas chamber,” he says. 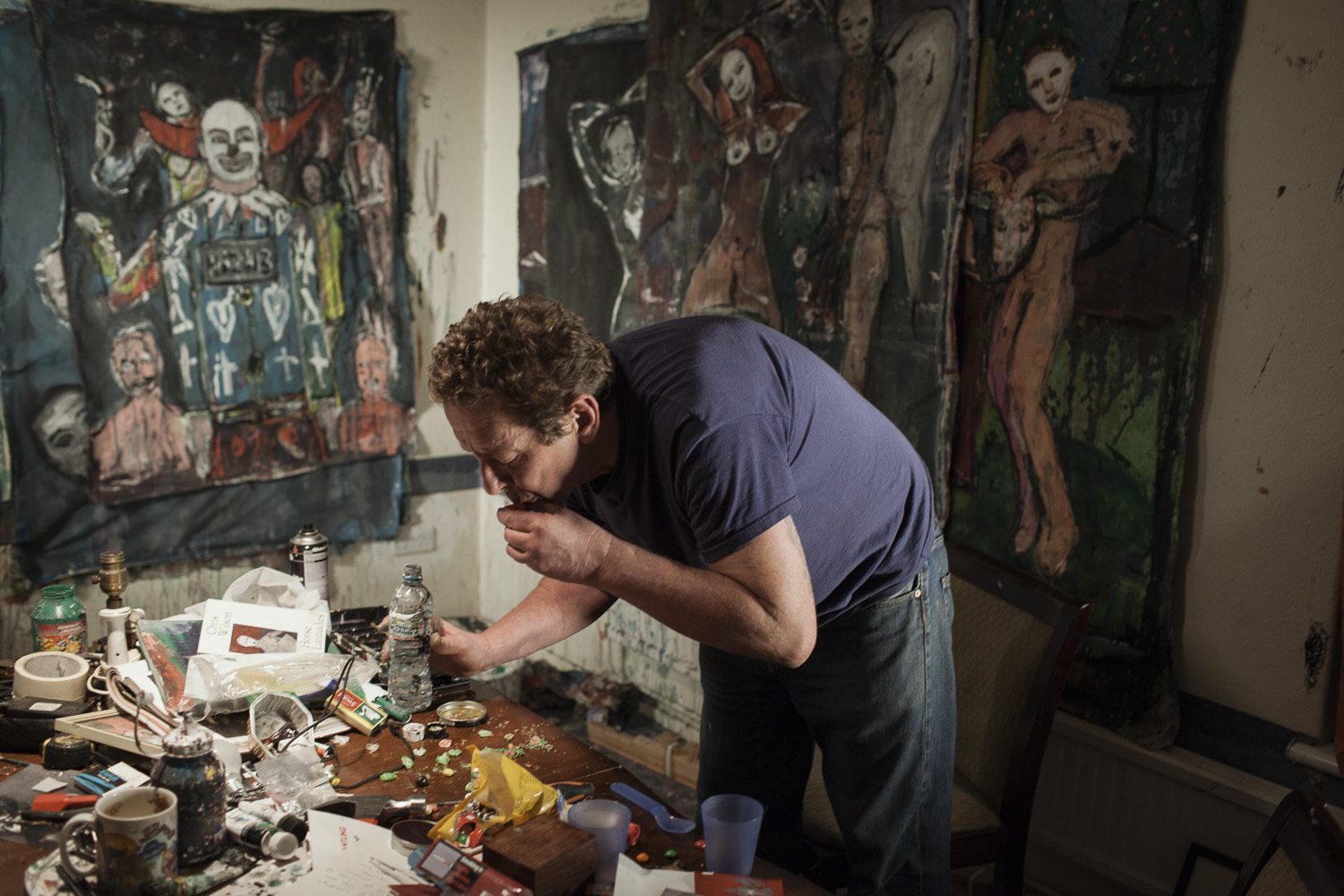 But Chris isn’t crying over spilt milk, his education began in prison. “It saved my life,” he says. “An old con lent me Crime and Punishment which eventually lead to the Beats.” When he tried hard enough and really focused through the prison’s bars, lunch slop and fortified walls, the North Beach streets of Kerouac and Ferlinghetti were just a heartbeat away. “I was doing what those guys were doing, it was surreal to think about that sitting in a cell.” It’s an ironic image that still makes him chuckle.

Thankfully, art and literature have gotten Chris this far, but he’s the first to admit that the battle never ends. “I realised I had qualities I wasn’t aware of before,” he says. “It’s a process of constant re-evaluation, second-guessing your natural instinct but still trusting your gut.”

So, after you read this Google: ‘Chris Wilson Just Like You.’ Watch the video as he scratches out a painting like his life depends on it, using whatever’s laying around – house paint, sharpies, spit and anything else that leaves a mark. “Creation is a place of freedom,” he says. “I am hovering near the ceiling like a spirit at the demise of the body in which it formerly dealt. You cannot trust a memory, it lies, but you can trust your scars.”

The Glue Ponies will be published by Tangerine Press in 2016.

Linkedin
RELATED ARTICLES
OTHER ARTICLES
As she gears up for the release of her first book, the 24-year-old climate activist talks standing up to authority and building a more inclusive movement.
Filmmaker Laura Poitras discusses her new documentary which traces the remarkable life of the artist-activist and the impact of her battle against the US opioid crisis.
Theo McInnes’s photos of the annual event provide an intriguing snapshot of contemporary Britain.
At his West Bank restaurant, Fadi Kattan established himself as the voice of modern Palestinian cuisine. Now, he’s bringing his innovative, bold flavours to the UK’s capital.
Author Edward Banches dicusses his new book, which examines the hard rock and metal scenes in five African countries: Botswana, Togo, South Africa, Kenya and Ghana.
Social prescribing connects people with non-medical support to improve their health and wellbeing – but some experts worry it’s just a stick plaster solution.