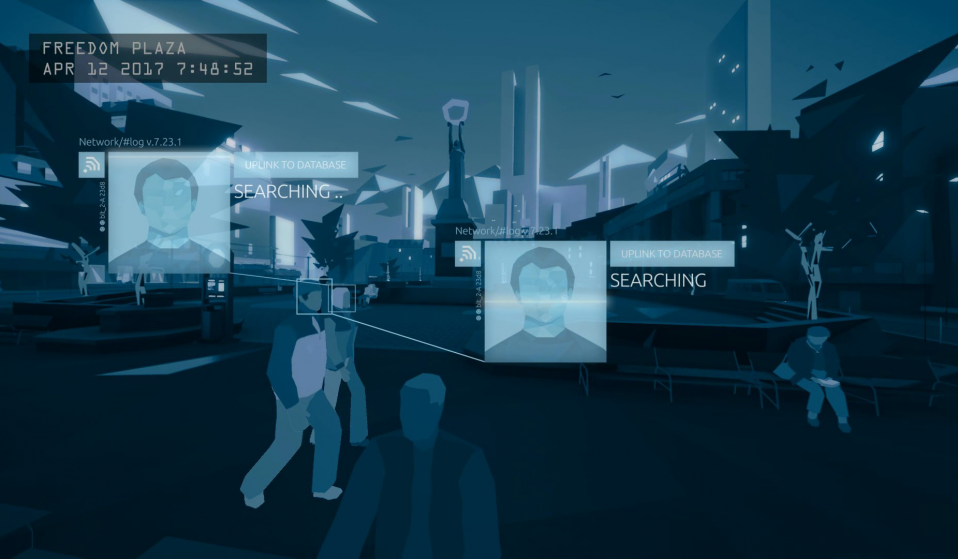 Watching personal communications, accessing private files and surveying citizens’ online presence - you have been selected by the government to help them discover who is behind terror attacks in The Nation. The information you supply will have consequences: how will you play?

Watching personal communications, accessing private files and surveying citizens’ online presence - you have been selected by the government to help them discover who is behind terror attacks in The Nation. The information you supply will have consequences: how will you play?

In a world where it’s easier than ever to be ‘catfished’, and Whatsapp is sharing our phone numbers with Facebook, it’s hard not to feel a little paranoid sometimes that our lives are being tracked by overlords online.

Twenty years ago, online shopping and sharing our locations with the world was far from common, and posting day-by-day updates on social media even more so. Now, so much of our lives are online, and we really don’t know how our personal information is being used or who it is being shared with.

Privacy concerns are increasing as time goes on, and the fragility of online security is being proven time and time again: it’s been more than a year since the data breach of the now infamous Ashley Madison case (and the hackers still haven’t been found); last week, Wikileaks published the personal details of victims of sexual abuse in Saudi Arabia, and more recently hackers in Chicago have accessed private information from up to 200,000 registered voters.

Inspired by the need for protection of private data, Osmotic Studios, a trio of German game creators based in Hamburg, are releasing “Orwell”, a PC game that “challenges people to dig into these topics that rise up in society again and again”. It’s a game that provokes users to ask questions.

It takes its name from George Orwell, the author of the dystopian novel 1984 where ‘Big Brother’ watches and controls everything, and it’s due for release later this year. Melanie Taylor is one the game’s creators.

What inspired you to create the game?
The Snowden revelations were a big influence at the time when we started. Our game designer Daniel came up with the idea of making a game that took place entirely on a PC desktop. We also wanted to try something with fresh mechanics and an emotionally engaging story that challenged the player to make difficult decisions. Making a game about online data spying was not a far jump from there.

What do you want to achieve by creating the game?
The game is not supposed to be a political statement of our own opinions, but it’s aimed towards asking questions instead of giving answers. We do not wish to push players toward any political direction, but would like to challenge them to reflect on certain topics that rise up in society again and again. Online information on people is getting more and more relevant and how we choose to portray ourselves through our online profiles is just as important as how we behave in our “offline” life. 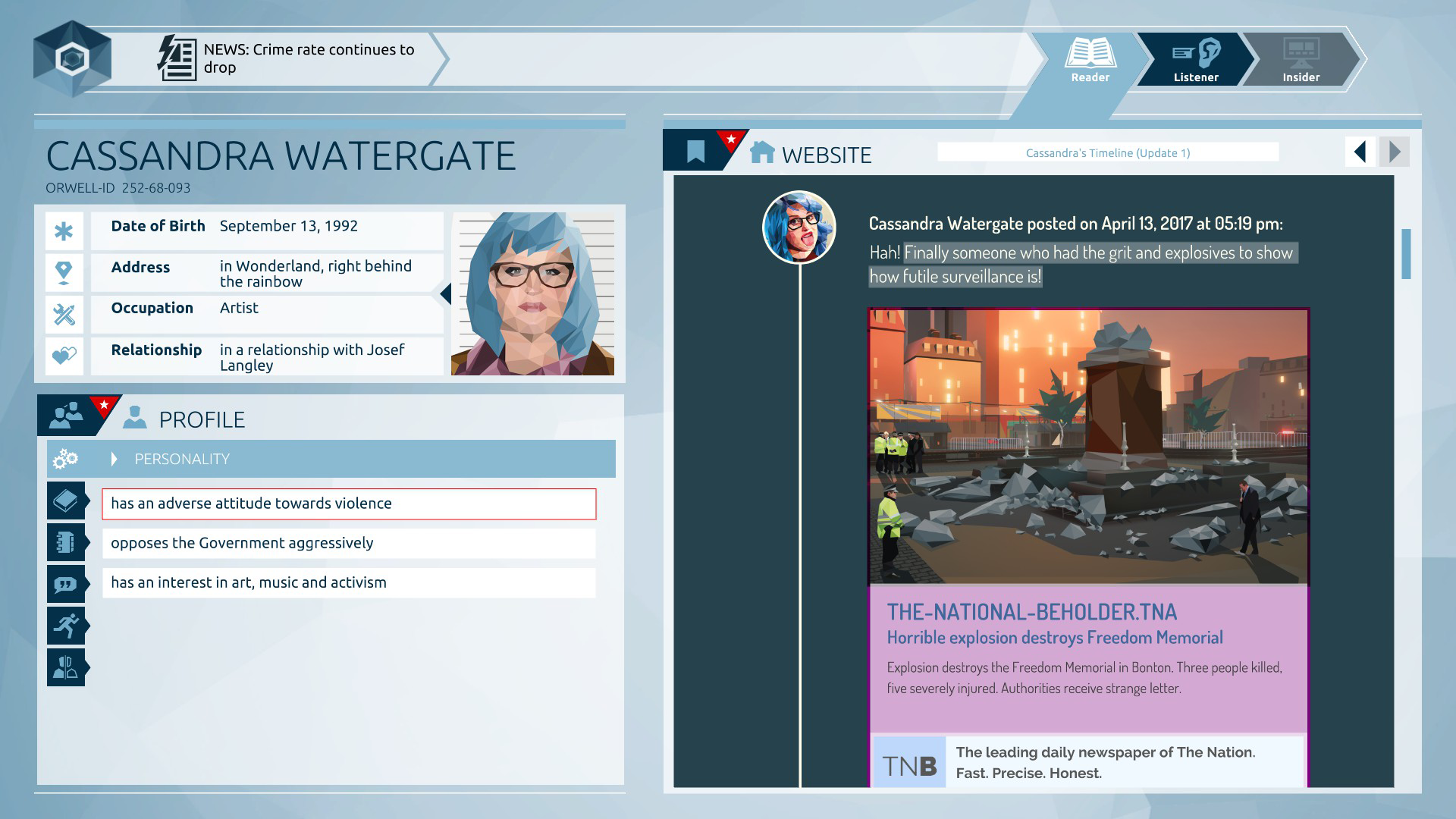 Do you think that we need to live out more of our lives offline?
We should try to be more aware of how much time we spend online in comparison to offline. The Internet can be a wonderful place, since information is accessible for anyone in no time and it is easy to discover great art, important knowledge, meet people from all around the world. But it is also very distracting and can keep us from living our lives. We should make conscious decisions on how we spend our time and get used to the thought that we “live” online as well as the offline now.

You’ve spent more than two years creating the game. Can you talk me through the creative process?
We had a lot of discussions at the beginning, especially about the game’s mechanics. This was essential in order to get the foundation for the quality of the player’s experience of the game. We knew that we wanted to make a narrative game and that we wanted the player to make moral decisions that would be uncomfortable in a way.

The next step was establishing the story, which Daniel designed, building a framework for how the game would work, which our programmer Michael established, and deciding on the graphic style/look and feel of the game, which was my job. The game looked very different at the beginning and the story was much more elaborate, so we went a really long way from there through test sessions, discussions and feedback from our great indie developer friends here in Hamburg.

How do you think our ‘online’ lives affect our ‘offline’ lives?
I think that our online life is just as important as our ‘offline’ life. We feel much more anonymous on the internet and it is easy not to think much before you post things on discussion boards or social networks. But in fact, the Internet never forgets and it is often pretty easy to track down things people post.

You have to be aware that nowadays, one does not need to be in any particular place in order to investigate people’s private lives. This does not mean it would be better to give up on our ‘digital’ lives completely. But it is important to think about these issues and how to handle one’s data. 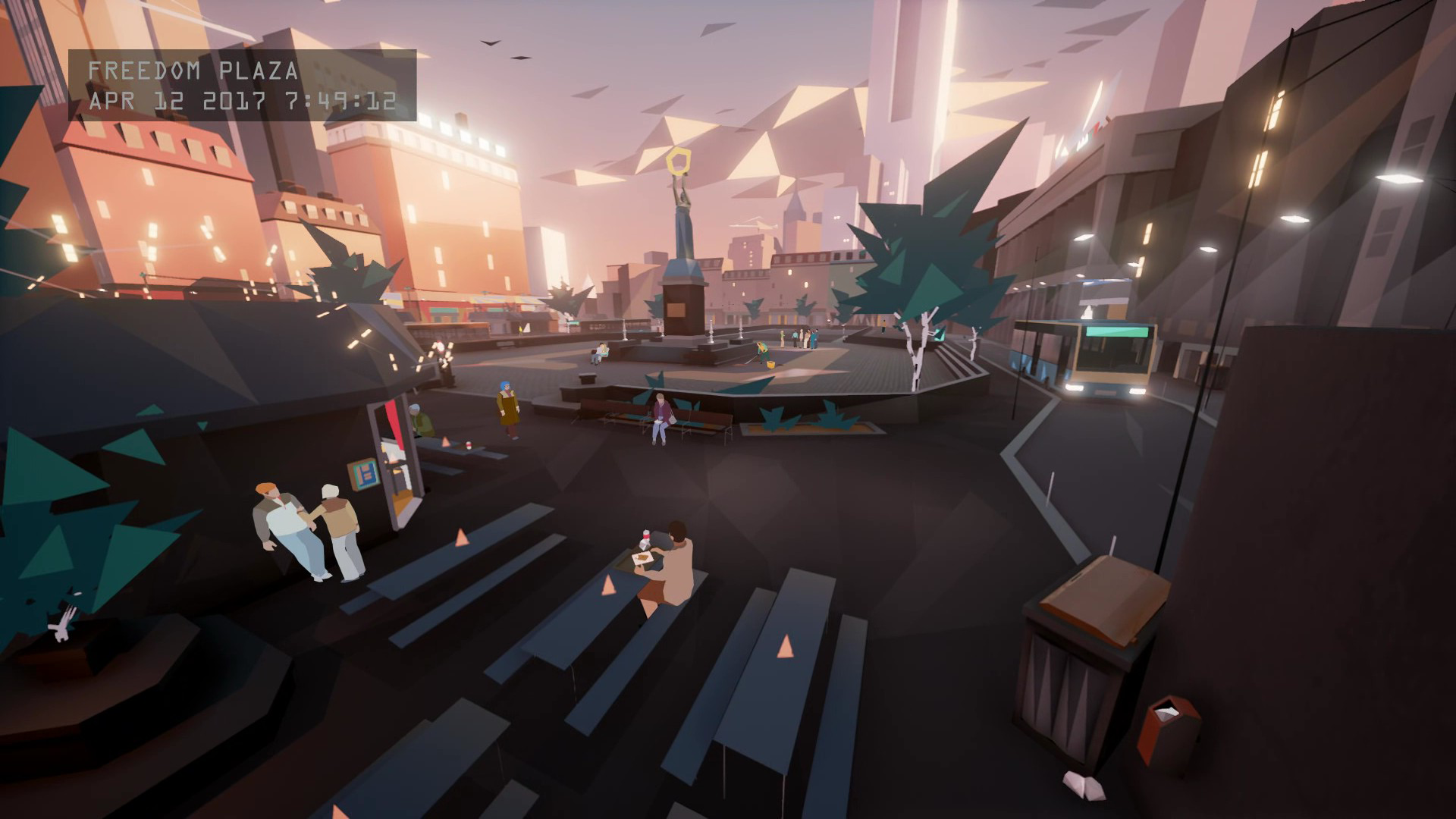 There has been a lot of controversy around games like Pokemon Go and privacy. What do you make of it?
I guess the biggest problem here is the fact that it is not really clear what happens to the data that is requested from the player. It is a difficult question and you have to decide for yourself if you are willing to give up control over your data in order to play the game.

On the other hand, location-based games such as Pokemon Go and Ingres are really interesting and leave great potential for more innovative games of this kind, so I would love to see more of these. Making it clearer for the player which of his personal data is stored and how it is used would probably help to make games like Pokemon Go less controversial.

You’ve said that the purpose of the game is to make people think- what message do you think they will take after a round?
It is really more about the questions the game is asking than sending an actual message. For example: How far can we go in judging people by online information? How far can investigations for reasons of ensuring the safety of people go before invading the privacy of other people too much? How do the dangers of giving away too much information about ourselves restrict freedom of speech (for example by self-censorship because of fear).

Linkedin
RELATED ARTICLES
OTHER ARTICLES
To mark the premiere of his new documentary on surfing giant Gerry Lopez, the filmmaker and former pro skateboarder sits down to share his unique brand of wisdom.
A new series of photos by Johny Pitts shines a light on communities and subcultures that have all too often been overlooked.
Photojournalist Fiora Garenzi spoke with people still living in Eastern Ukraine, an area which seen some of the heaviest fighting since the war began.
After rewriting the indie rulebook with her devastating songs about romantic longing, the singer-songwriter is now imagining a future in which the artist is no longer a product.
The author discusses her new memoir, which offers a sobering reflection on the racism and otherness she’s experienced along with a joyful celebration of her culinary heritage.
Following the release of his latest album, the rapper talks about finding a new approach to songwriting, attitudes to poverty, and why his music is more than a political statement.