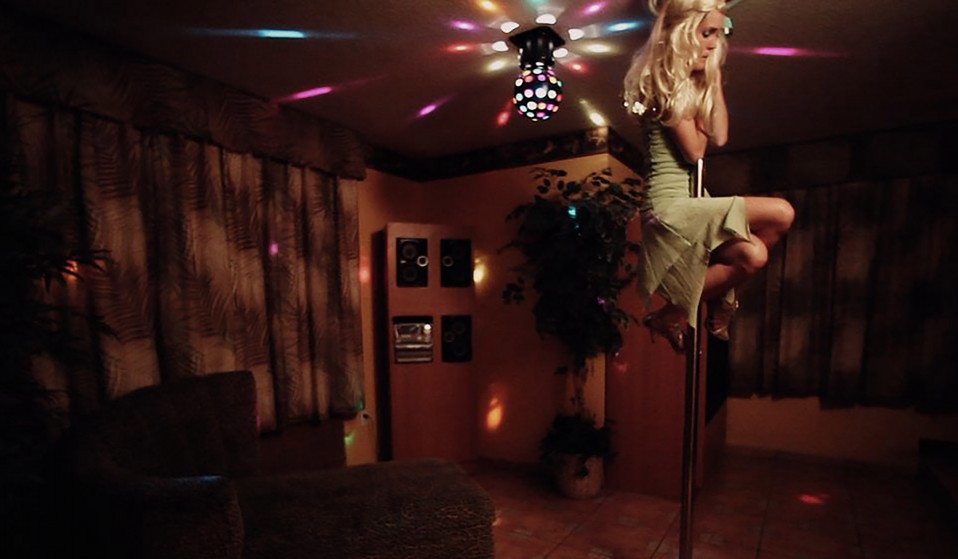 From Gummo to Dogtooth, acclaimed director and choreographer Celia Rowlson-Hall spotlights seven killer moves from off-kilter classics... and nominates the greatest dance movies ever made.

Celia Rowlson-Hall is one of the most refreshing voices in filmed choreography.

Over the past six years, she has written and directed over 50 short films and videos while working with a diverse array of talent, from Gaspar Noé and Lena Dunham to MGMT and Chromeo.

The dancer moved to New York in 2006, having graduated from the North Carolina School of the Arts, and branched into directing while utilising the body as her storytelling vehicle.

Since then, Rowlson-Hall has honed her idiosyncratic style in shorts such as Prom Night (2010), Si Nos Dejan (2013) and the brand new Looking Glass, presented by designer Derek Lam. Her first feature film, Ma, has been touring international film festivals ahead of a wider release in 2016.

In a week dominated by the spectacle of the Oscars, Rowlson-Hall was up for celebrating the more unconventional side of filmmaking. Here are her favourite off-kilter, underrated dance sequences in 21st-century cinema.

Gummo – Harmony Korine (1997)
Context: Two teens search for ways to pass the time in a small, tornado-ravaged town inhabited by a cast of deformed, disturbed and unnerving characters.

“I love everything about this scene. I love his weight-lifting exercises. I love the too-big tap-shoes and her careless performance. I love how it was shot. I love how their arm movements mirror each other in the end. I love the setting… and I love this movie.”

Welcome to the Dollhouse – Todd Solondz (2005)
Context: An unpopular 11-year-old struggles to find her footing in a middle-class suburban community made up of distracted parents and snooty classmates.

“It’s so good because it’s so simple and it’s so her. She’s restricted to sitting on the car because Dawn Wiener is way too self-conscious to be standing in the driveway and dancing… and because her real focus is him, not dancing. But she needs to move. I love this movie too.”

Twin Peaks: Fire Walk With Me – David Lynch (1992)
Context: In a prequel to cult TV series Twin Peaks, an FBI agent disappears while investigating a murder that may be connected to the killing of Laura Palmer one year later.

“People always talk about Audrey’s dance – whatever. This is the dance. It’s so funny and random and such an awesome use of storytelling.”

Fish Tank – Andrea Arnold (2009)
Context: An alienated 15-year-old girl, who’s been expelled from school, begins an uneasy friendship with her mother’s new boyfriend. He encourages her to pursue her one interest: dancing.

“I love how it’s not ‘impressive’ – it just is what it is and she is trying really hard to be good. It’s her release too. Being alone in that room, away from all the shit. This movie is so good. Andrea Arnold is a master storyteller.”

Dogtooth – Yorgos Lanthimos (2009)
Context: A couple raise their three children in an isolated compound where knowledge of the outside world has been kept at bay.

“This scene is pure perfection. Just watch it: she’s mashing up dance moves from movies that have influenced her and forced her to ‘come of age’. You can’t beat the setting either.”

Attenberg – Athina Rachel Tsangari (2010)
Context: An inexperienced 23-year-old lives with her terminally-ill father in an industrial Greek town, where her friend Bella teaches her about sex.

“The two women execute this amazing dance/walking pattern in the courtyard of an apartment building and, for me, it served as a way to mark each chapter of the film – or to act as a palate cleanser of sorts. This movie is amazing. The Greeks know what’s up.”

Somewhere – Sofia Coppola (2010)
Context: A famous actor recuperates from injury at a Hollywood hotel while facing an existential crisis.

“There are three dance scenes in Somewhere and they complement the narrative arc of the film. The first two are the twin strippers, dancing on poles in his hotel room. The third dance scene is him watching his daughter ice-skate. But I love these two scenes; I love their performance and how it was shot: simple, straight on.”

As for the best dance movie ever, it’s a three-way tie.

Sweet Charity – Bob Fosse (1969)
Context: A dance partner, who longs for romance but has been mistreated by men, strikes up a promising connection.

The Red Shoes – Michael Powell and Emeric Pressburger (1948)
Context: A young ballerina becomes the lead dancer at an established ballet company and stars in a new production based on a fairy tale.

“Known collectively as the Archers, Powell and Pressburger made the ultimate dance movie. Such a classic and a must see. No question.”

Dirty Dancing – Emile Ardolino (1987)
Context: A teenager falls for her summer camp’s dance instructor while holidaying at a Catskills resort with her affluent family.

“By far the most influential movie of my life. My babysitter showed it to me way before I was allowed to watch PG-13 movies. I loved it. I felt so dangerous and alive when I was watching it. All the dance moments are amazing but for some reason this will always be my favourite scene. Rehearsal: so much tension and just a little air-guitar and crawling on knees… it says it all. It’s all about intention.”

Linkedin
RELATED ARTICLES
OTHER ARTICLES
Members of the collective share some of their reasons to run as part of #UnitedBySummits, a campaign that looks to uncover transformative power of the outdoors.
New legislation is set to make it more difficult to hold Israel accountable for its human rights abuses.
To mark the anniversary of the mass trespass of Kinder Scout, a group of hikers came together with the intent of creating a new, fully inclusive culture for rural spaces.
The author discusses her blistering new novel about history, revolution and queer love.
The revered showbiz chronicler recalls his journalistic beginnings, documenting subcultural scraps in the ’80s.
Following the release of his newly republished 1991 book, Redheads, the American photographer reflects on his celebration of ginger people and their magnetic power.