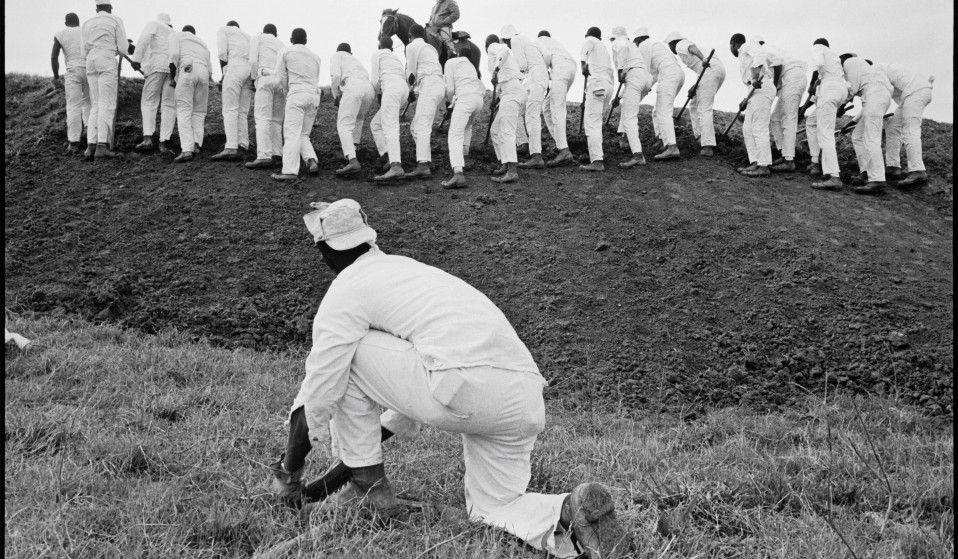 When Danny Lyon infiltrated the Texan prison system during the Vietnam War, he captured a portrait of America that was propaganda free. But he didn’t do it alone. His new book 'Conversations with the Dead' contains the artwork and letters of prisoner #122054, a kid doing life called Billy McCune.

I remember the moment when I first stepped inside the Walls Unit in Huntsville, Texas, with my camera. It was evening and I had passed through the various control points, the massive locked entrance, then more gates and I was walking around inside the large prison yard entirely alone, with my Nikon F over my shoulder. 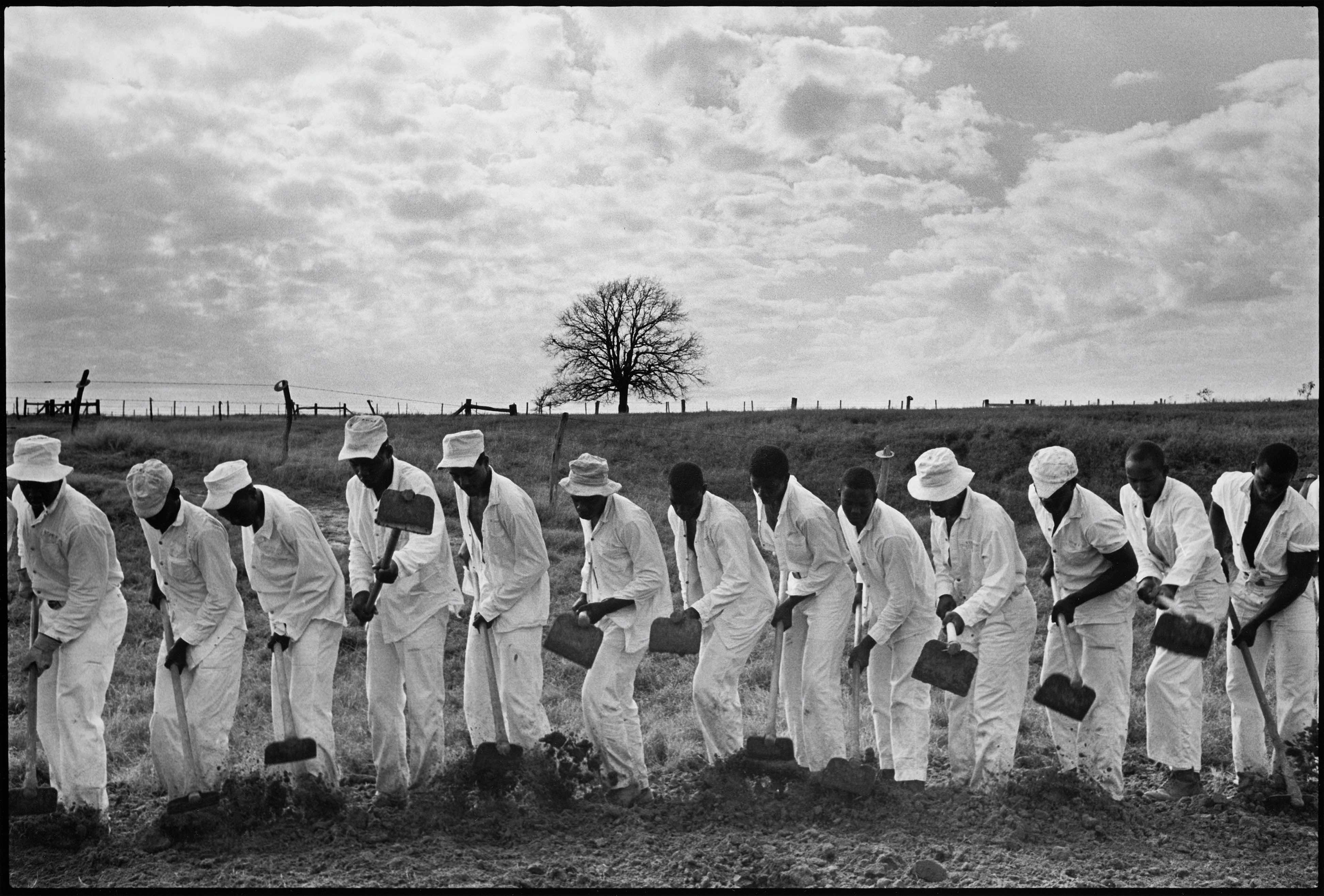 Getting inside the Texas prisons with a camera was my great coup in journalism. What I managed to do was unheard of at the time. I couldn’t believe it. I was also extremely happy, as if I was in a dream. I don’t think I took any pictures at all. I knew what lay ahead. The fox was inside the chicken coop and was going to stay there as long as he wanted. In all, I would spend the next fourteen months moving between six Texan prison units. 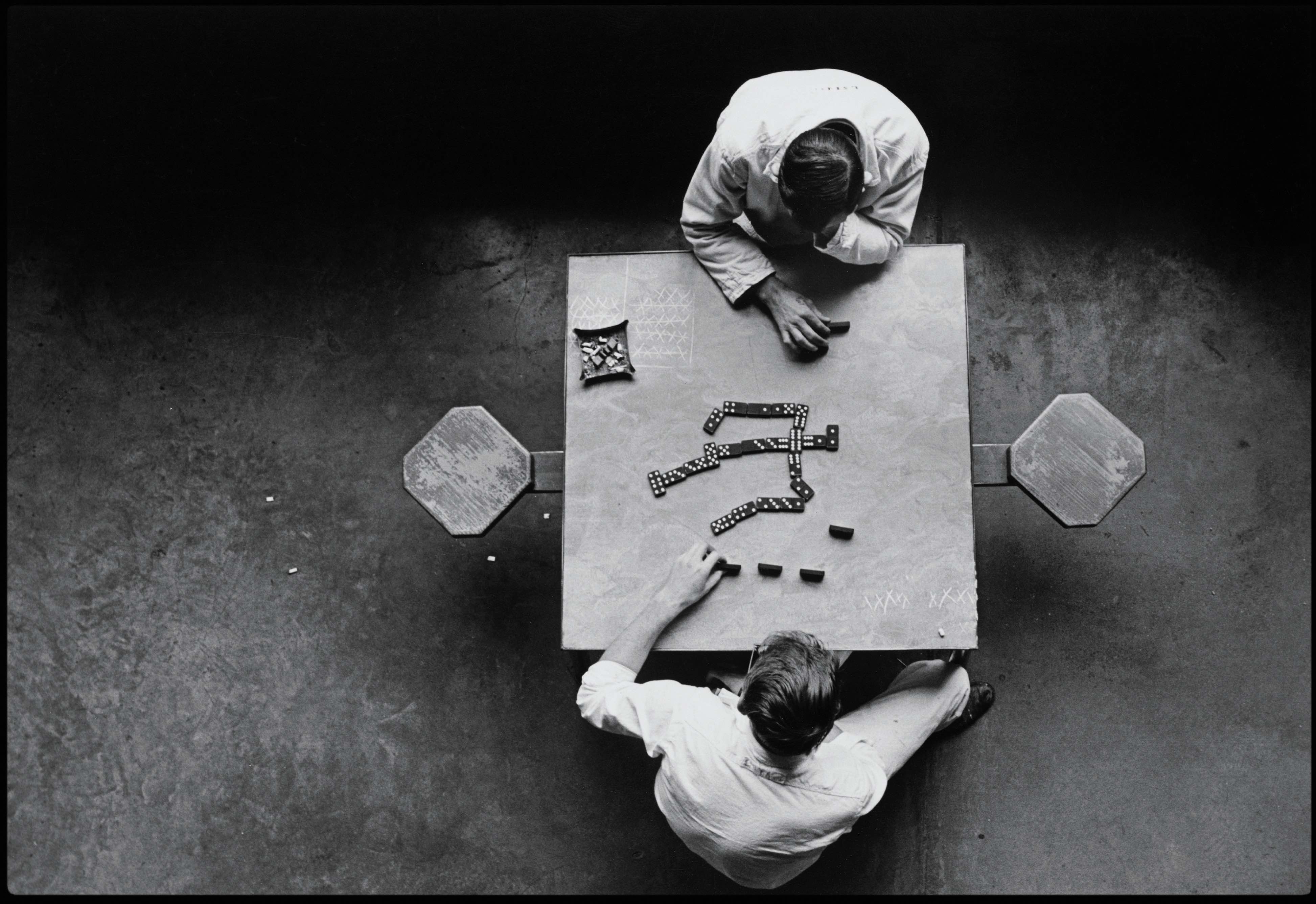 This was December of 1967. The war in Vietnam was raging, as were anti-­war protests. It was the time of the hippies and the ‘Summer of Love’ was about to happen in San Francisco. All of this got tons of press. I was determined to bring things that were not already being discussed into what we now call ‘the media’. I was interested in the inside of America, not the distractions it created on the outside. So prison was a perfect place for me, an unknown world, where no reporters ever went. 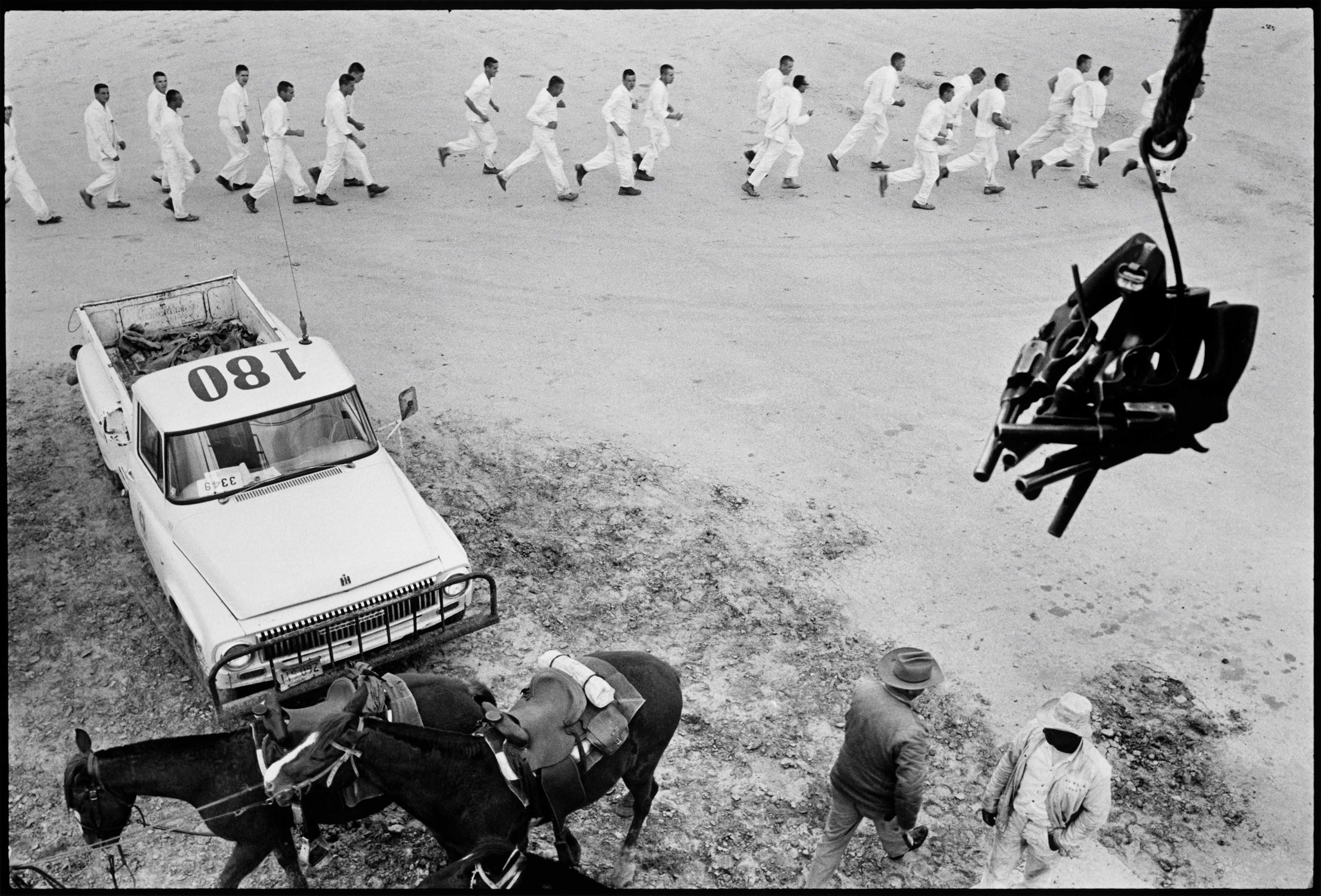 I have never bought into that business of ‘detachment’ in journalism. What does that mean? The SS were told that they were doing Germany’s dirty work and they had to stay detached from their disgusting job of running gas chambers and mass murder. Journalism is supposed to be detached? That’s what is wrong with it. Once I heard a journalist on the radio and he was reporting on yet another bomb going off. Apparently it was pretty gruesome. He started to cry and then he quickly apologised. “Good,” I thought. “He is human.” 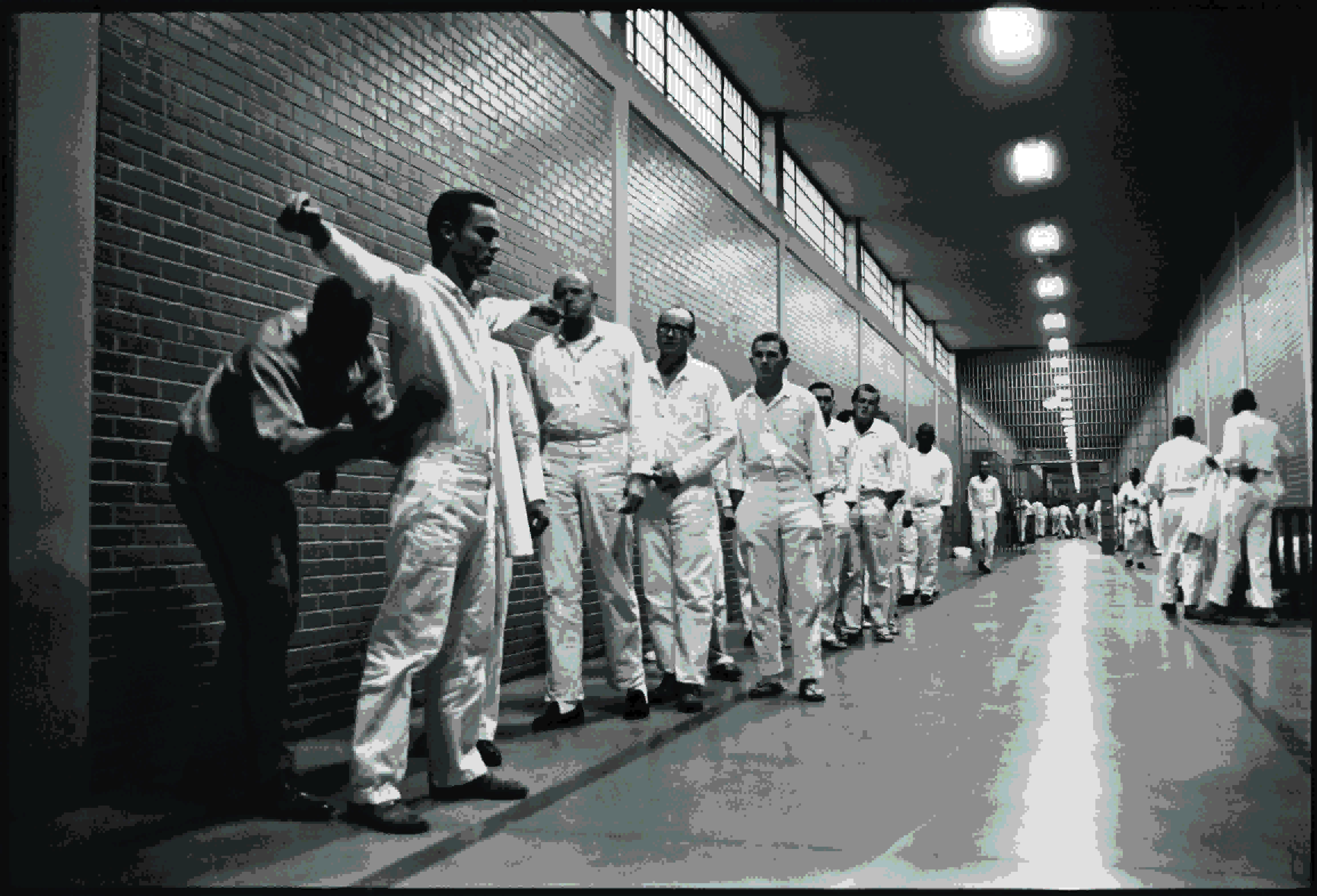 Walter Cronkite, “America’s most trusted journalist”, helped get my country into Vietnam by his dispassionate early reporting, much of it baloney being handing to him by the US Government. Then, in the summer of 1968, when the Chicago PD was throwing young protesters in Chicago through plate glass windows, he starts to cry and says, “Maybe the war is a bad idea.” 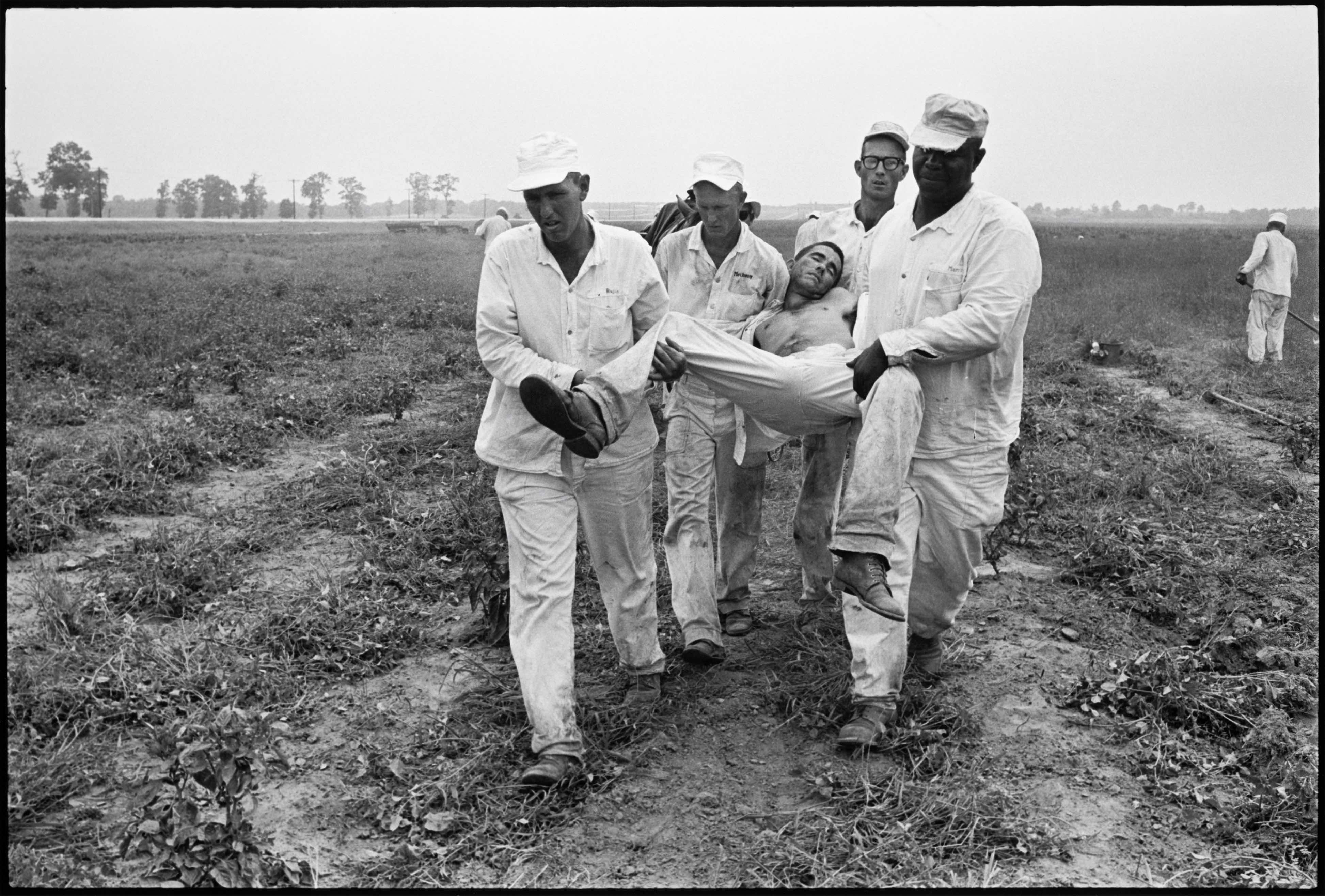 The first thing a reporter needs to do is admit he is human to himself, then make that clear to his audience and in everything he does. What exactly do they teach in journalism school? Do they include a course on ethics? They really must. The absence of ethics is probably the single most glaring problem in American journalism today ­and in America in general. Ethics are our innate sense of right and wrong. 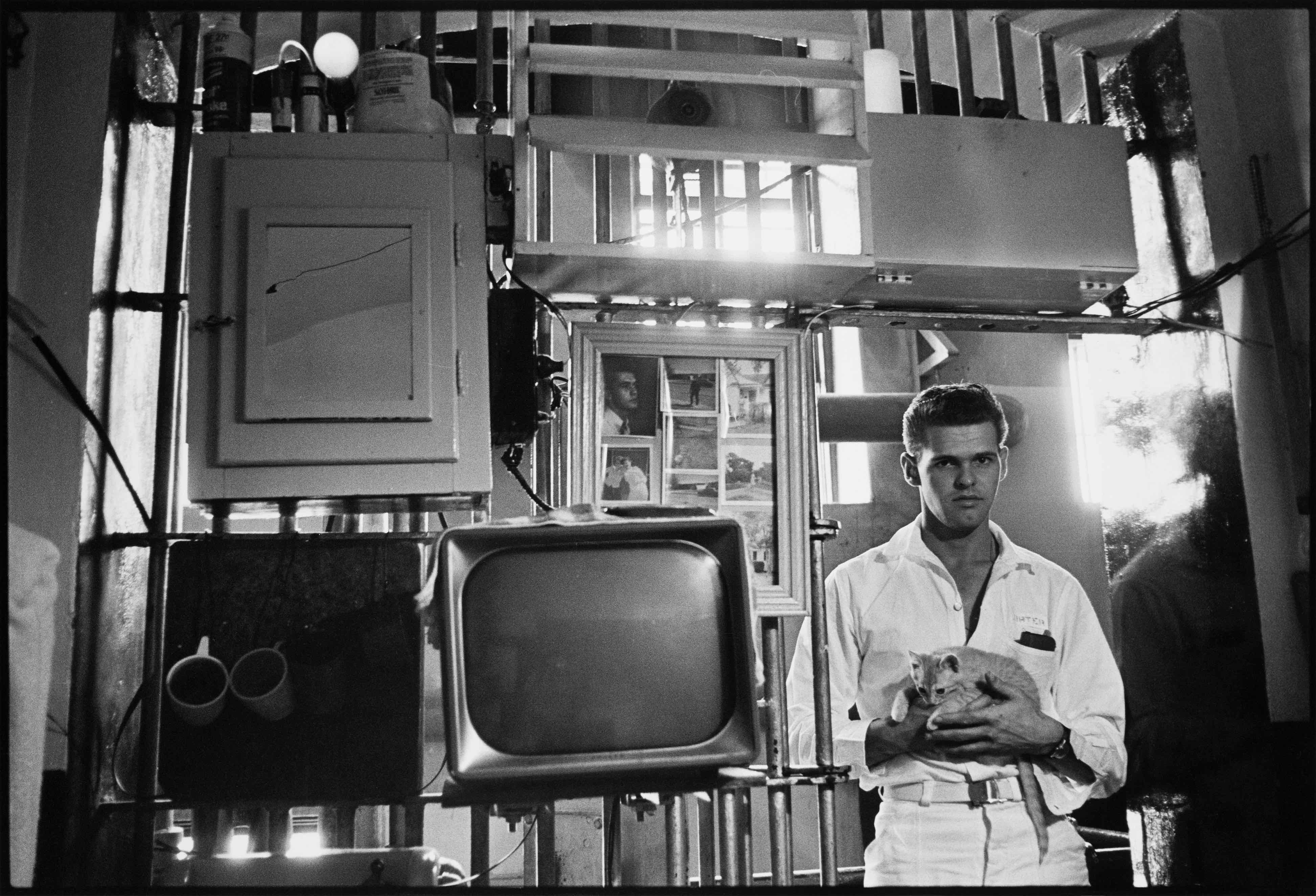 Some people had a problem with my first major project The Bikeriders because they felt I got too close to the story. But I was a bikerider before I joined the Outlaws, the gang I photographed, and I continued to ride after I left the club and did the book. When it came out in 1968, The Bikeriders was the second book published in the English language to use a text made entirely from tape recordings. 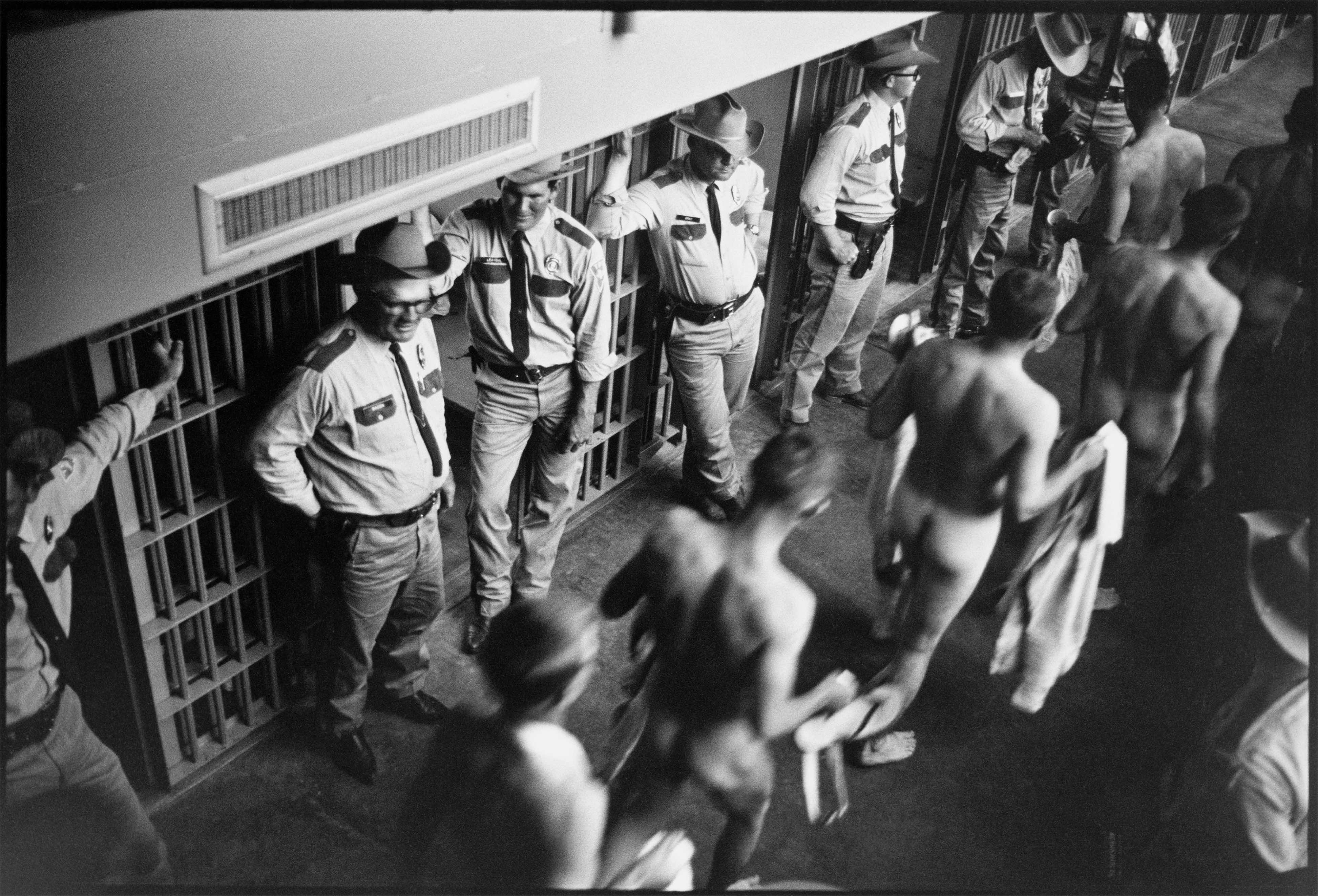 The recordings were of bikeriders and Outlaws telling me their stories onto 1⁄4 inch analogue tape. I have always let people speak for themselves.

In the prisons I was only visiting, but how could I not make friends inside? I could come and go through the thirty-­foot high, six-­foot thick walls any time I wanted. If anything I was a New Yorker, which marked me, as most of the inmates were Texans. But I was also a pothead, as were many of the inmates. A couple of very close friends of mine had done prison time for selling pot or hash. Aaron Evert Jones [who features prominently in the book] once told me that if I brought a lid [an ounce of marijuana] inside the prison, he would arrange for me to photograph two inmates having sex. In the interests of sanity I declined. 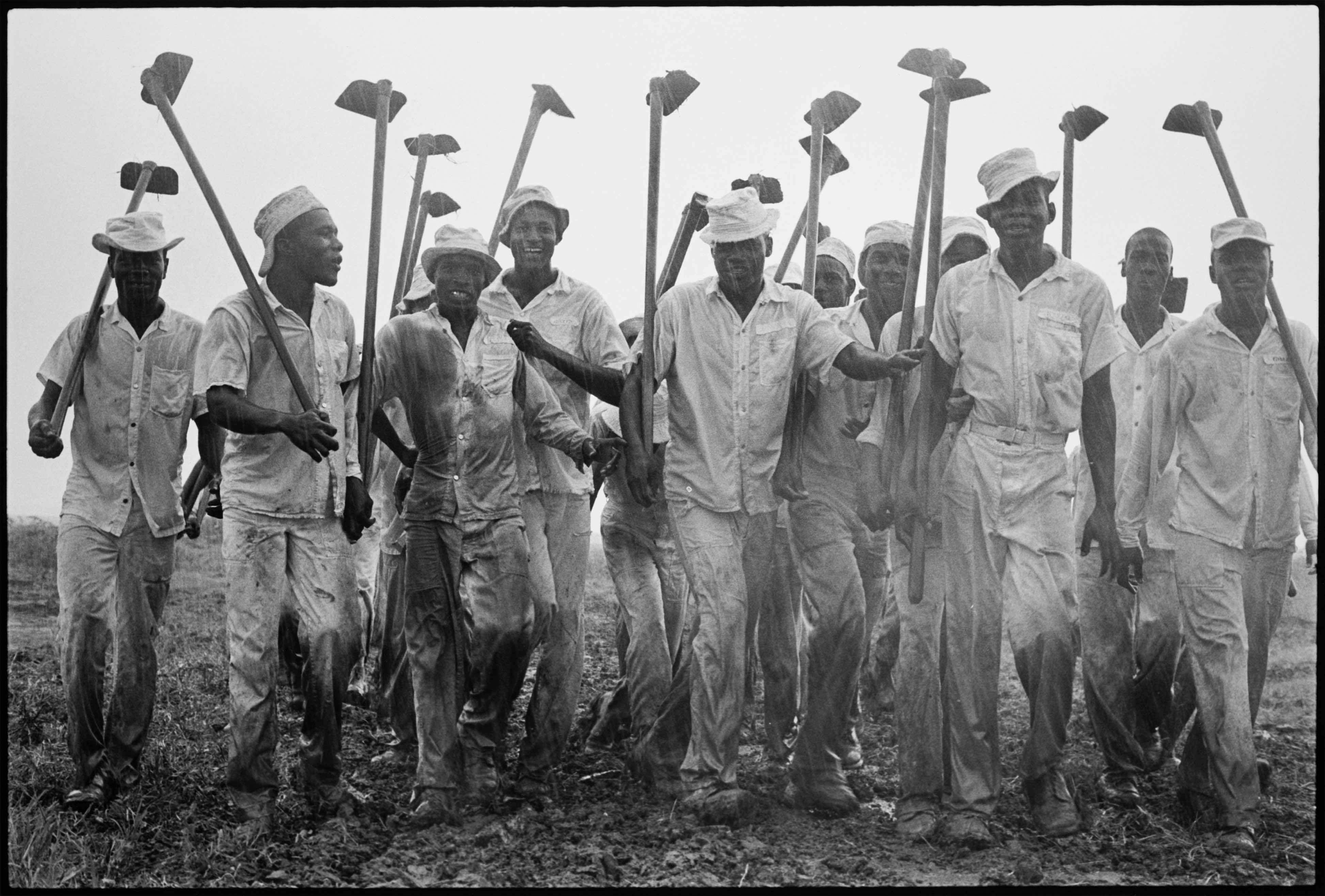 Billy McCune, whose writing and artwork I included in Conversations with the Dead, was already well known inside the prison when we met as he had been sentenced to “death”. He mutilated himself in the Fort Worth prison and later had his sentence changed to “life”. After first meeting him through the bars of his isolation cell, I arranged to visit with him in a prison office. I tape recorded him singing ‘My Last Mile’. 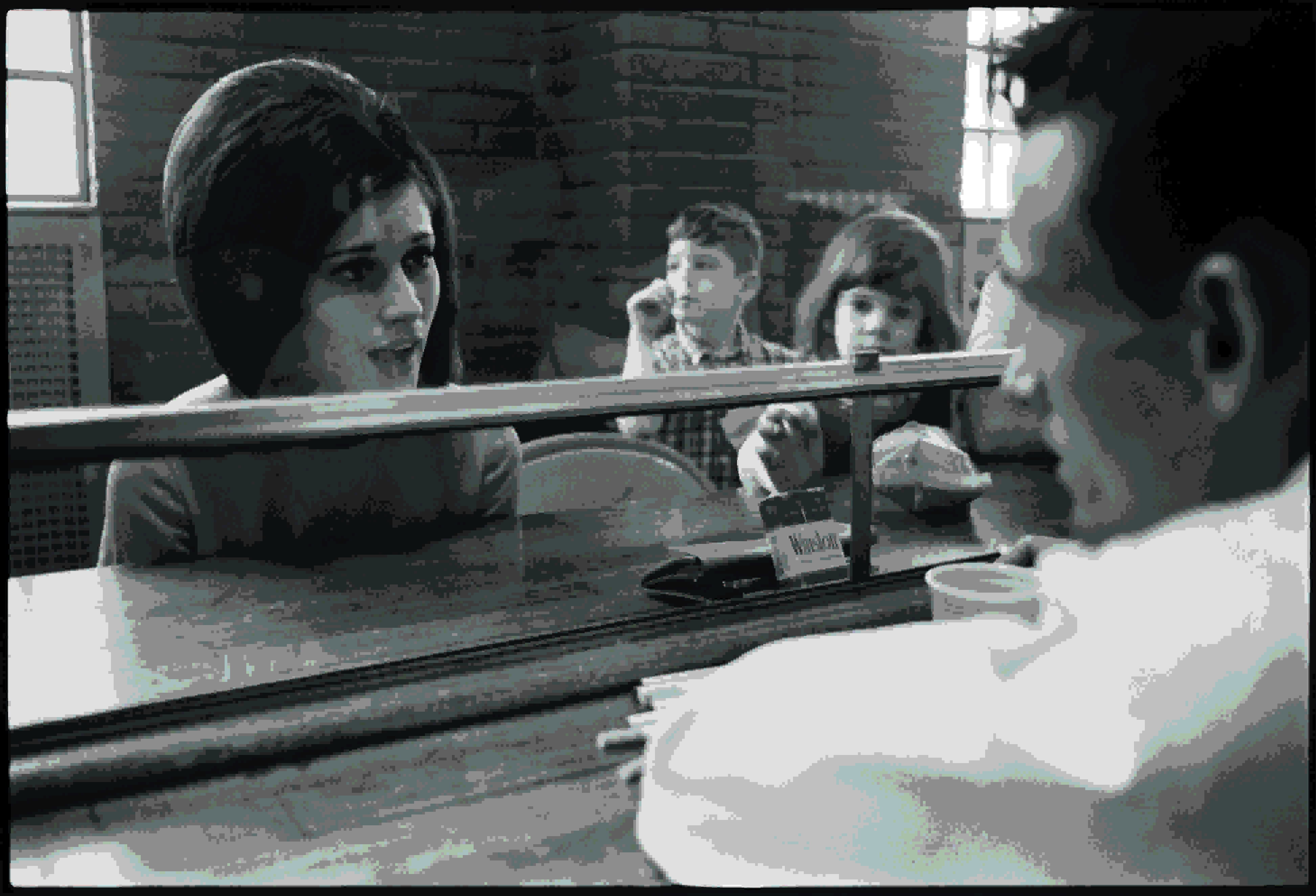 Billy was a powerful creative force and when I argued with the warden in order to save his writings I told the warden they were “a work of genius”. The warden then answered that they were “a pile of crap”. I do think Billy was a genius of sorts. Just think today, when America’s prison population is twenty times what it was when I made the book, how many exceptional people must there be, kept away from us, forever?

Conversations with the Dead: Photographs of Prison Life with the Letters and Drawings of Billy McCune #122054 is published by Phaidon.

Linkedin
RELATED ARTICLES
OTHER ARTICLES
The government’s failure to take long Covid seriously has led to the formation of a group campaigning for the thousands of forgotten victims of the illness.
Following the success of her debut novel, the Tottenham native is restating her commitment to the place that made her.
Following the release of his latest album God Don’t Make Mistakes, the rapper talks horror villains, police brutality and being unafraid to show his vulnerable side.
Members of the collective share some of their reasons to run as part of #UnitedBySummits, a campaign that looks to uncover transformative power of the outdoors.
A group of Ukrainians living in Poland are helping Ukraine withstand Russia’s brutal invasion by buying supplies and shipping them directly to the war’s frontlines.
The revered showbiz chronicler recalls his journalistic beginnings, documenting subcultural scraps in the ’80s.