Art & Culture / Six reasons to not freak out about the future 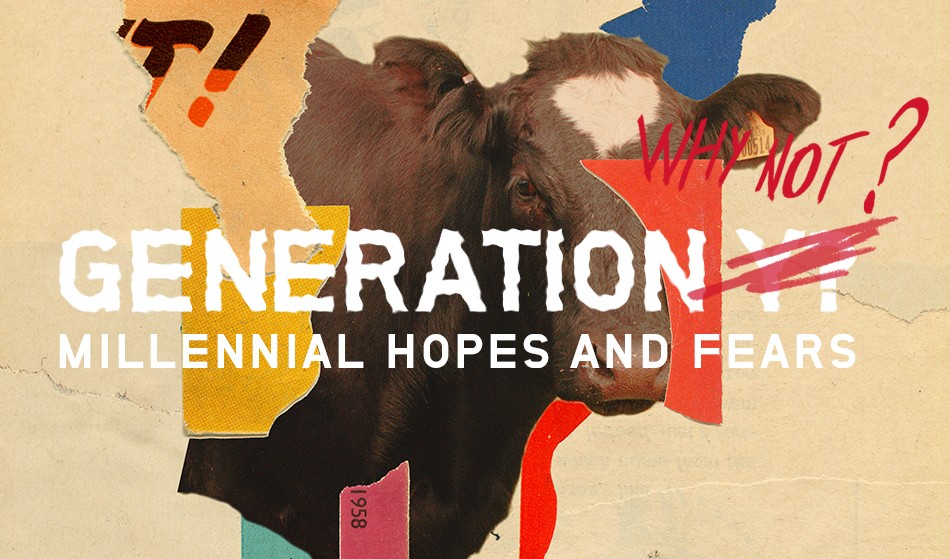 We found two experts who, in this three-part series, will break down your deepest, darkest fears.

If, like us, you lose sleep at night worrying about the future, it’s worth knowing that some good news lies on the horizon. We found two experts who amid all the doom-and-gloom have found reasons to be optimistic. In this three-part series, they'll break down some of your deepest, darkest fears.

Ed Gillespie and Mark Stevenson are both future ‘possiblists’, drawn together through their respective work in cultural change, as well as an inspirational and occasionally irascible belief in building a better tomorrow.

In his best-selling book, An Optimist’s Tour of the Future, Mark Stevenson goes on a whirlwind journey through the future of technology and meets the futurists, farmers and professional geeks tackling the planet’s greatest challenges – from nanotechnology that could spell the end of capitalism, to permaculture systems that suck CO2 out of the sky. Ed Gillespie, meanwhile, is the founder of sustainability agency Futerra and a celebrated ‘slow traveller’ who criss-crosses the world without getting on a plane, then writes about it.

Together as The Future Men, they’ve got their sights set firmly forward – and, contrary to popular belief, everything is still to play for on the path to a brighter future.

In this three-part series we set Mark and Ed the challenge of tackling six of our deepest fears and anxieties – about the state of our planet, the plight of mankind and what at times feels like the death of democracy.

It’s not really about running out of water. We live on a blue planet which has quite a lot of the stuff, although the vast majority of it is rather salty! It’s more about where we source it from and how we use it.

Olivier De Schutter, the United Nations’ representative on the right to food between 2008-2014, said that family farmers (collectively responsible for fifty-six per cent of global agriculture) could double food production within a decade using low-water, low-fertiliser methods. That’s a hell of a statistic, and not one you’ll hear the agribusiness lobby quoting often. It’s a statistic that could change the world, because it can help save it. We’re heading towards 10 billion people by the end of the century and our current system can’t hack it. As De Schutter says: “Conventional farming relies on expensive inputs, fuels climate change and is not resilient to climatic shocks. It simply is not the best choice anymore. We won’t solve hunger and stop climate change with industrial farming on large plantations. The solution lies in supporting small-scale farmers’ knowledge and experimentation, and in raising incomes of smallholders so as to contribute to rural development.”

Luckily, water is the ultimate recyclable resource. Fine mesh nets in hot climates can ‘harvest’ moisture from the air overnight, and personal condensing technologies (like water bottles) fill themselves from ambient water droplets in the atmosphere. Using clean, green renewable energy – which, with the Enernet up and running, we should have an abundance of – we can desalinate sea water. It’s a race against time, of course, as we deplete our freshwater at an alarming rate – but it’s a race we can win with a little technology and a lot of love for small farmers.

2. Will corporate interests block the rise of renewable energies?

They can try, but they will lose.

The key battleground in every country will be access to energy markets, allowing any generator to buy and sell freely. That battleground has a name: ‘the Enernet’, essentially a peer-to-peer energy marketplace that already exists in fledgling form in the Netherlands. Called Vandebron, it currently boasts thirty-five small green energy producers selling to 80,000 homes more cheaply than the big utilities. Open Utility is just finishing the first trial of UK Enernet (backed by government grants). The Chinese are investing billions in the idea. US company Geli is building what it calls an ‘energy operating system’. It’s the next step on a journey that Germany started decades ago, where half of electricity supply companies are owned by local government, communities and small businesses – all of whom are increasingly competing privately owned utilities out of the market, offering cheaper tariffs than the incumbent behemoths.

It’s an approach that will become increasingly popular with governments, investors, industry think-tanks and banks. Why? Because cheap energy boosts the economy like nothing else, meaning corporate energy interests in their current form will find themselves flipped – no longer seen as powering growth, but throttling it. Those who don’t adapt sharpish will be finished. (Ask yourself why Germany’s biggest utility, E.On, is trying to split itself in two and tool up to supply mega-cheap renewables. It gets it.)

What’s great about the coming energy market reboot is we don’t need to worry about slavishly cutting back fossil fuels, because it creates a system where community green energy can flourish uncontrollably, nudging out its dirtier cousin. (There is a problem with smoothing out the supply that comes with renewables, which generate at the whim of nature, not man. Luckily, battery technologies, on current trends, will solve that problem by 2025.) The end game is that we won’t need to use less energy but in fact will have a squanderable abundance of green energy to play with, and that’s the foundation of solving a lot of the world’s woes.

The Dubai Electricity and Water Authority is claiming their new solar power plant, opening in April 2017 will (at peak times) provide energy at six cents per kilowatt hour, undercutting both coal and gas. It brings an observation by former Saudi Arabian oil minister Sheikh Zaki Yamani into sharp relief: “The Stone Age did not end for lack of stone, and the Oil Age will end long before the world runs out of oil.” In fact, we seem to have already decoupled global emissions and economic growth. Thanks to renewables, world CO2 emission has been flat for the last two years, even as energy consumption has gone up. So the question you need to be asking is what should we do when we have too much energy?

Stay tuned for parts two and three of The Optimist’s Guide to Tomorrow.

Linkedin
RELATED ARTICLES
OTHER ARTICLES
Following the release of his debut single, Deyaz talks battling addiction, dealing with his struggles through music, and building a budding music career from his living room.
A new law change is enabling Britain’s donor-conceived children to know the truth about their origins – but campaigners say the fertility industry must do more to protect people.
After building his reputation covering the US civil rights movement in the 1960s, the photographer went on to produce some of the most enduring images of the past century.
A new film from Berghaus traces the story of Adam Raja, who left behind a turbulent upbringing to discover the healing power of climbing.
Photographer Sean Maung reflects on documenting a small town in Pennsylvania afflicted by high levels of unemployment, poverty, violence, crime, and addiction.
Author Edward Banches dicusses his new book, which examines the hard rock and metal scenes in five African countries: Botswana, Togo, South Africa, Kenya and Ghana.