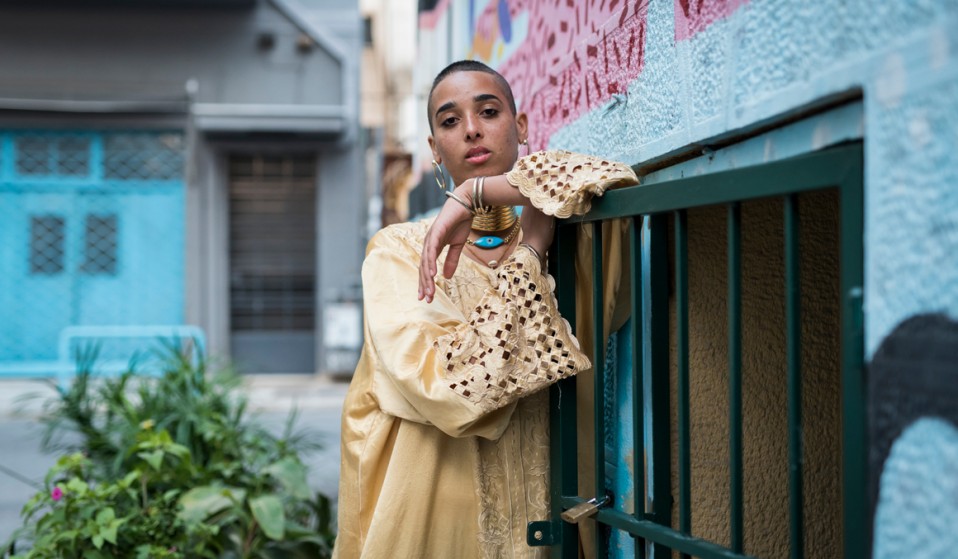 Artist Tabita Rezaire is as unconventional as it gets. Using a mix of technology and traditional African practices, she’s determined to counteract the oppressive forces of the internet – finding herself in the process.

In a candle-lit basement in central Athens, artist Tabita Rezaire is surrounded by a circle of slightly perplexed faces.

Near an open laptop screen and a large bronze gong, she stands still and focused in the centre of a cosmogram drawn with grains of rice and lavender, wearing a flowing dress patterned with screenshots of her videos. A projector bathes her in light as she stares into the distance and lightly plucks a mbira (finger piano) that echoes eerily around the room.

Tabita is a French artist of Guyanese and Danish descent who grew up in the Parisian suburb of Vincennes, but is now based in Johannesburg.

Her videos and virtual reality installations use things like CGI animation and GIFs to explore the politics of technology, to critique negative representation of the black female body as well as to highlight how colonial structures of power and oppression continue to endure. 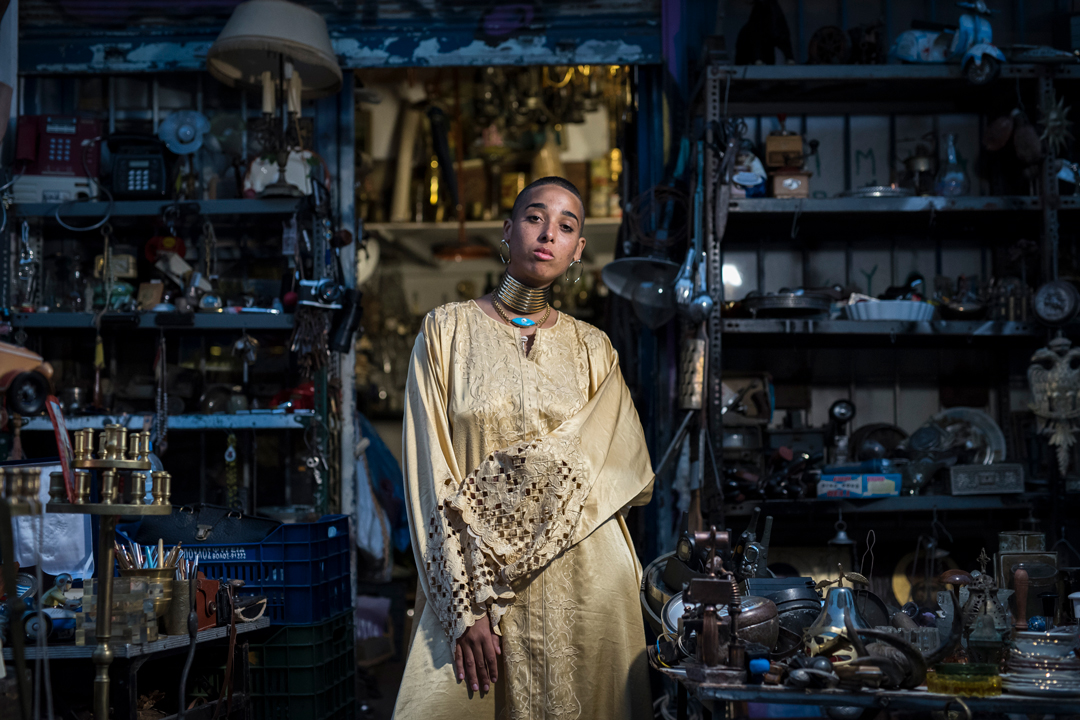 Tabita is in Athens to present at the Enter Afrofuturism festival. Afrofuturism is a broad artistic movement that encompasses everything from film and literature to graffiti and dub reggae. It uses elements of science and fiction to revise and reclaim African diasporas’ histories while constructing emancipatory visions of the future.

Tabita doesn’t define herself as an Afrofuturist – and refuses to be labelled at all – but her work deals with similar themes, like challenging Western attitudes toward ‘primitive’ cultures. Today’s presentation is the latest evolution of Tabita’s practice, which combines video, breathing exercises, traditional African ‘cosmological knowledge’ and, of course, the giant gong.

“Our collective consciousness is traumatised,” she explains. “We are still today dealing with the legacies of hierarchies between systems of knowledge as they have been integrated into the post-colonial social order.”

Tabita addresses some pretty intense concepts, but in person she expresses them with a sense of lightness and an ability to laugh at herself. 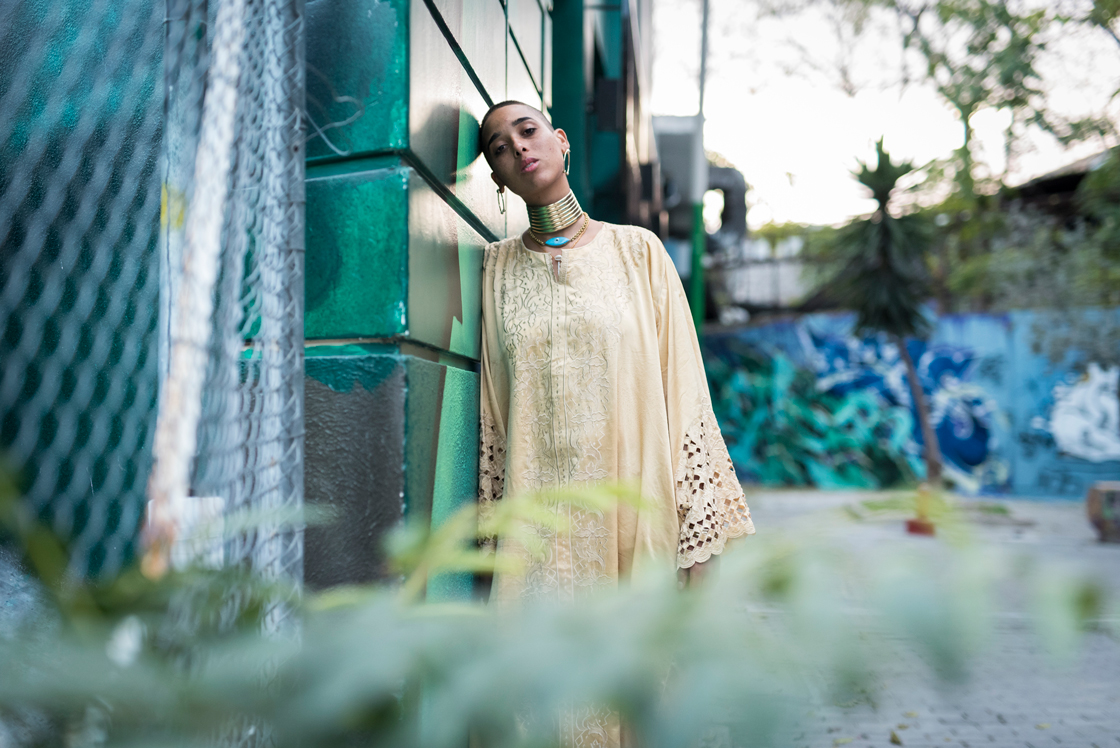 As she walks breezily through Athens’ flea-market district during our photoshoot, with onlookers gawking at her flowing robes and shaved head, the sight of a Grace Jones record seems like a natural cue to ask about style inspirations. “God,” she replies with a playful standoffishness, stopping the attempt at small talk dead.

Tabita once struggled to understand her identity and purpose in life. Growing up as a woman of colour – part of a generation who have never lived without the internet – she was confronted with abuse both online and off. “The internet only mirrors real life and, in the real world, it sucks to be a woman right now,” she says.

Tabita comes from a non-religious family, but tried to find god in a search for answers as a teen. When that didn’t work, she withdrew into depression until she began to find solutions in her own creativity.

“Art is a healing technology,” Tabita explains. “Through my practice and the research involved, I have been able to make sense of the world around me and that’s had a tremendous impact on my own healing. I began to understand the mechanisms of oppression and the violence inflicted on us as black people. My video works became a way to ‘unlearn’: to peel off the layers of this coercive history.”

She began by using the aesthetics of internet lolz to question dominant Western historical narratives. Sorry For Real, for instance, imagines the ‘Western world’ asking to make amends after calling to apologise for colonisation. 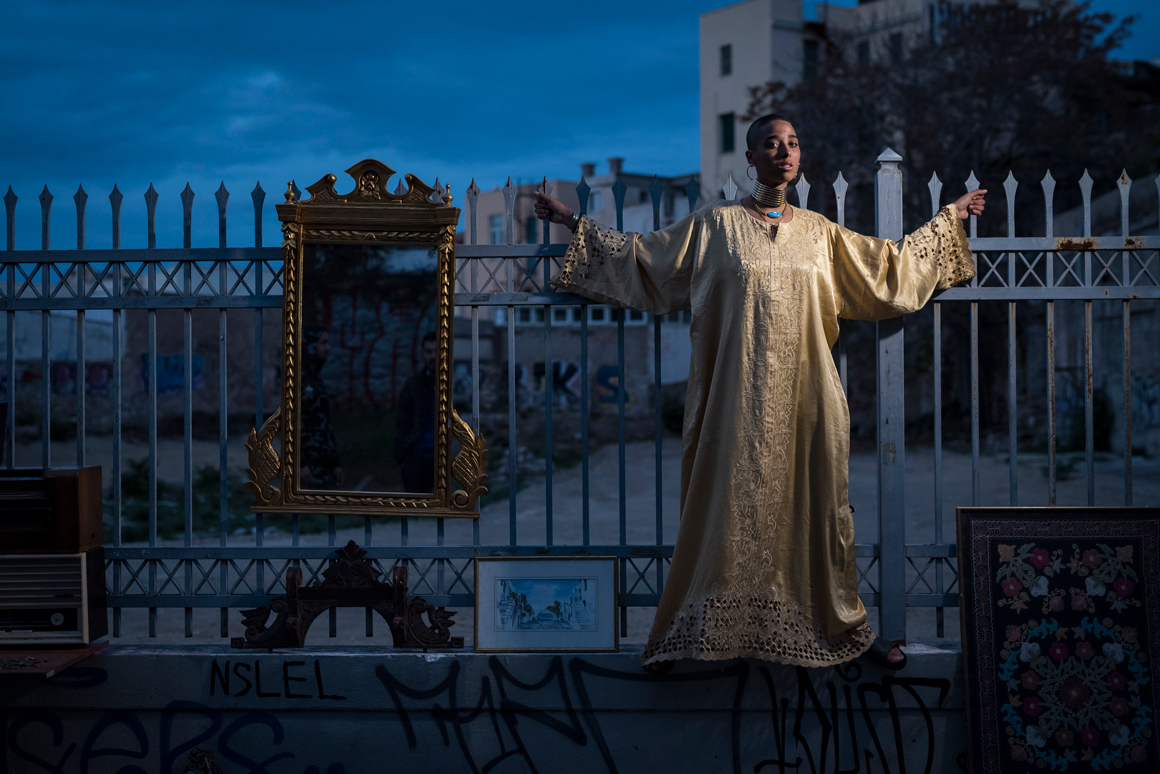 “Without romanticising blackness or pre-colonial Africa, my work seeks to honour the contributions of black people and cultures over time and space,” she says.

“Those contributions have been either erased, vilified or appropriated; my practice is one of healing our historical memory and recovering from manufactured amnesia.”

Less than half of the world has access to the internet. Only 31 per cent of the African continent is connected, usually at low speeds and high prices. Tabita argues that, far from being an economic and social leveller, the web just reinforces the hegemony of the West.

“It’s electronic colonialism,” she says. “It’s not the liberalising tool we’ve been sold. Instead it reproduces oppression and inequality; from racism, misogyny and homophobia to economic and racial exclusion. We are no longer colonial subjects, but we have become cyber slaves. Even the physical structure of the internet, the undersea fibre optic cables, is laid out onto colonial trade routes. The architecture of the internet is based on pain.”

In 2014, Tabita moved to Johannesburg, where she began practicing Kemetic yoga and consulting with a Sangoma, a traditional South African healer. These rituals, she explains, helped her connect with her ancestors and discover an alternative way to spread her message: by teaching.

We may never be able to rid the internet of oppressive forces, she says, but presenting her work through circles of healing helps “create ways of being outside structures of domination”. 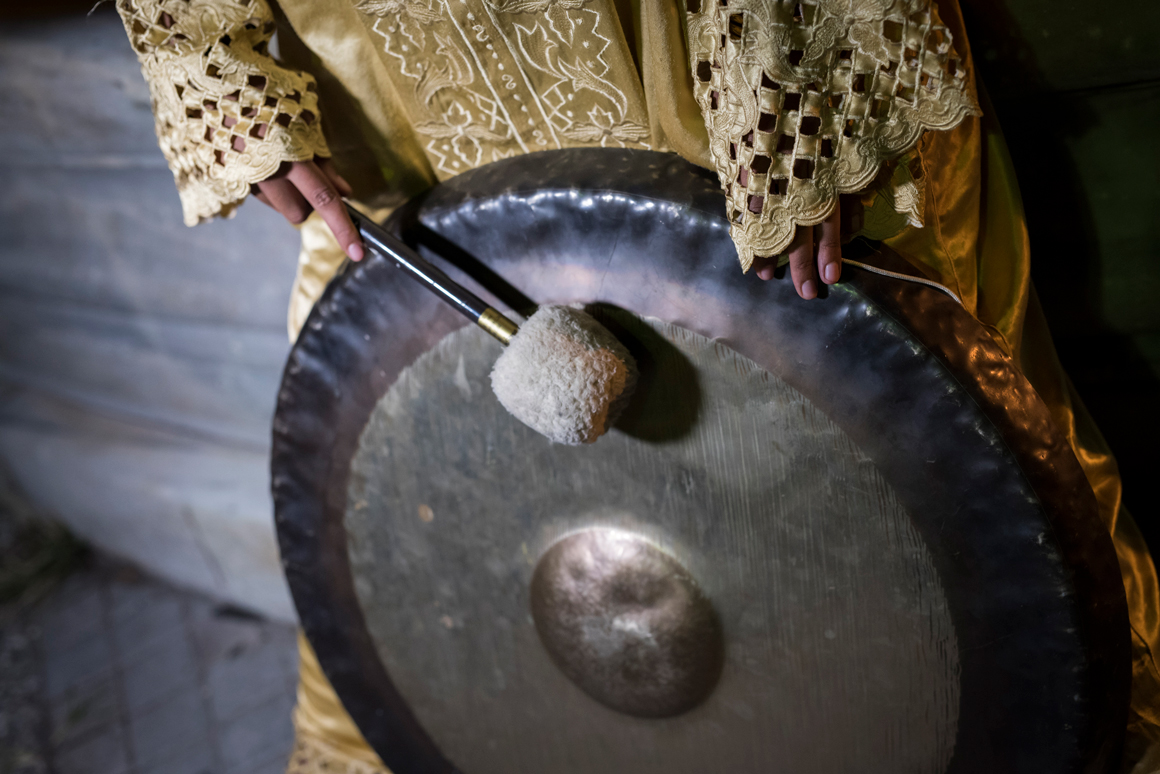 As Tabita’s hour-long offering comes to a close in the basement, she pours water over the rice and instructs us to close our eyes. The gong reverberates into one continuous, undulating sound. Her ritual may be over, but for Tabita, it’s part of a wider mission to teach us how to decolonise our body-mind-spirits and embrace spiritual connection.

“It’s a journey of acceptance, of love and compassion for self,” she says. “How can you be at peace with what and who you are when the world tells you that you are not worthy? It’s a struggle of resilience. I’m still trying to overcome that inner-voice which sometimes tells me I’m not enough.”

Find out more about Tabita Rezaire.

Linkedin
RELATED ARTICLES
OTHER ARTICLES
Filmmaker Laura Poitras discusses her new documentary which traces the remarkable life of the artist-activist and the impact of her battle against the US opioid crisis.
A recent High Court ruling against the right to wild camp in Dartmoor National Park sparked the largest land protest in history – and campaigners say their fight is not over yet.
Theo McInnes’s photos of the annual event provide an intriguing snapshot of contemporary Britain.
Tristan O’Neill’s shots of dancers caught in moments of reverie at the height of rave’s golden age are a testament to the UK’s legendary club culture.
At his West Bank restaurant, Fadi Kattan established himself as the voice of modern Palestinian cuisine. Now, he’s bringing his innovative, bold flavours to the UK’s capital.
A new law change is enabling Britain’s donor-conceived children to know the truth about their origins – but campaigners say the fertility industry must do more to protect people.