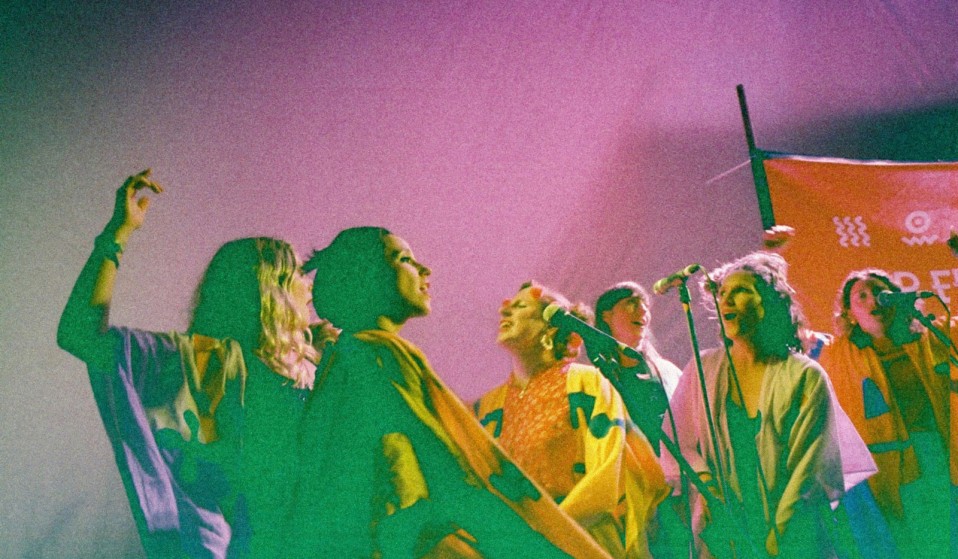 This 25-strong collective showcases the strength of badass female voices: musically, personally and in the wider world. But this week they face another challenge: bringing the legendary sounds of DJs Horse Meat Disco to life.

This 25-strong collective showcases the strength of badass female voices: musically, personally and in the wider world. Now, ahead of their debut album, they face a different kind of challenge: bringing the legendary sounds of DJs Horse Meat Disco to life.

It’s a cold Wednesday morning at a warehouse in East London, where a dusky room scattered with amps and instruments is filled with stillness.

This is Total Refreshment Centre: a spot favoured by musicians for recording, rehearsing and performing their work in a creative environment that isn’t prohibitively expensive.

Luisa Gerstein is one of them. She keeps a small studio space here to hone various projects, including the band Landshapes, but today she’s here to talk about something quite unlike anything else.

Deep Throat Choir is a collective of 25 women who meet every week to plug into the harmonic power of their voices.

Whether it’s Bjork’s ‘Stonemilker’, MK’s house classic ‘Burning’ or an original written by Luisa, the material is transformed into an uplifting rush.

“I’d been playing in bands and just wanted to do something a bit more stripped, to minimise the tools involved,” says Luisa, sitting cross-legged on a wooden bench, wearing docker trousers, a blue wooly jumper and grey socks.

“There has been a sense of wanting to be basic about music again. I like the fact that we don’t need laptops, effects pedals or anything else that needs to be plugged in. We can do a show anywhere with no PA – and that feels good.”

The lights flick off as Luisa says this. Her shaved head becomes a silhouette, the light outside so dim that it illuminates just one side of her face. 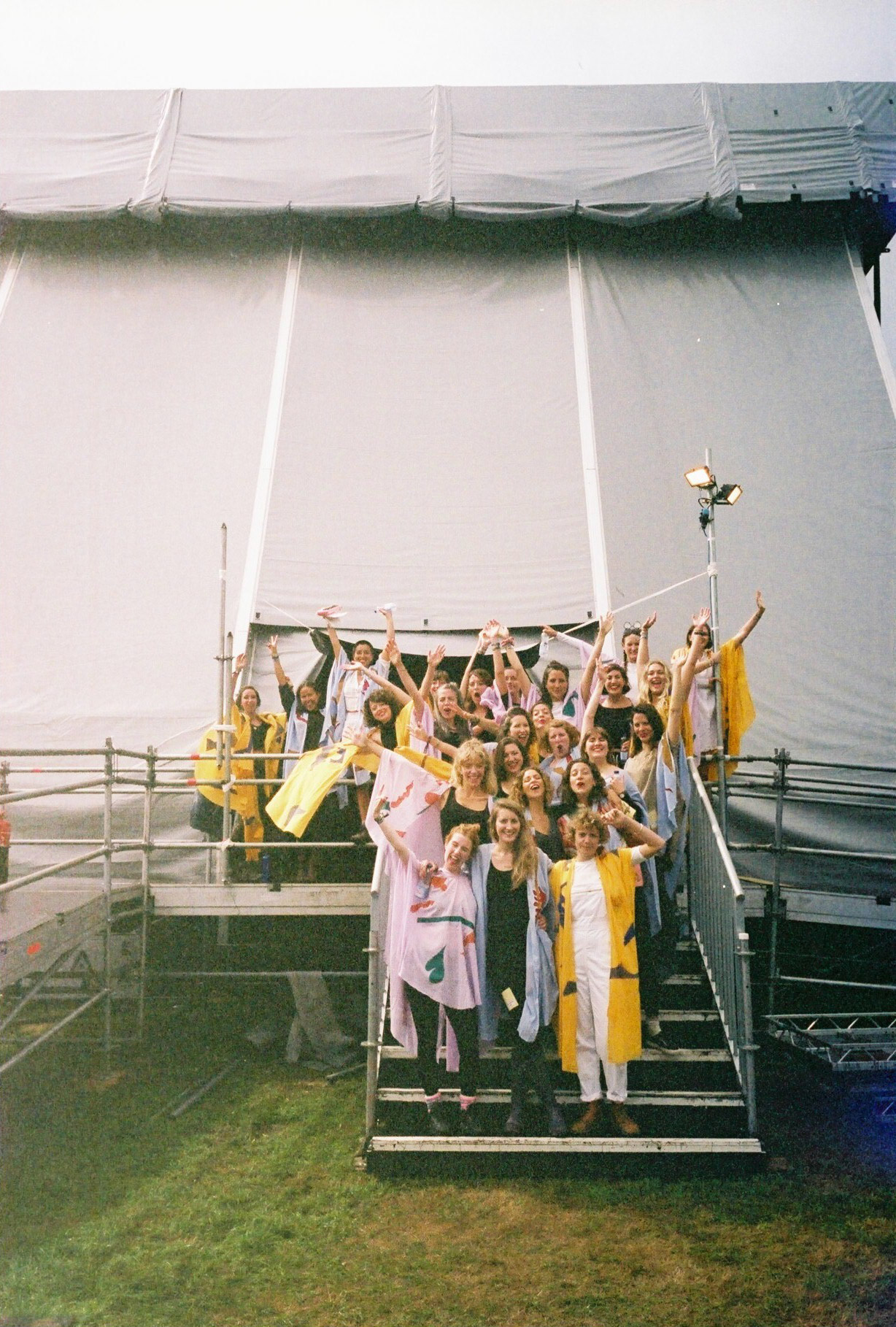 There’s something about her nature – bright, good humoured, easy to speak with – that makes it easy to imagine her in the role of ringleader.

But although she started the whole thing in 2013, extending a word-of-mouth invitation to friends of friends who wanted to sing, she doesn’t want to be the mouthpiece for the group.

There are too many personalities for one voice to do it justice, she says. Just being asked what they all might have in common stumps her.

[In a follow-up email, following rehearsal, the group settles on: “a belief in the collective power of female voices; musically, personally and in the wider world.”]

One thing central to Deep Throat Choir is togetherness, Luisa says. Although they’re about to release debut album Be OK on Bella Union, there are no egos to manage; no squabbles to negotiate.

Everyone pitches in with an idea on how to make something work.

In contrast to your typical four-piece band desperate to ‘make it’ in the industry, the members range from women in their early twenties to late thirties, from professional musicians to people who have never sung in public before.

“It’s nerve-wracking, getting on stage for the first time and performing in front of people,” says Luisa. “But together, I think everyone gets something from being part of a huge gang.

“You engender a community just by getting together regularly. Whatever I’m feeling before I arrive, I always come away lighter and happier. I read that heartbeats can synchronise when you’re singing as a group, so I think it feels good even at a chemical level.” 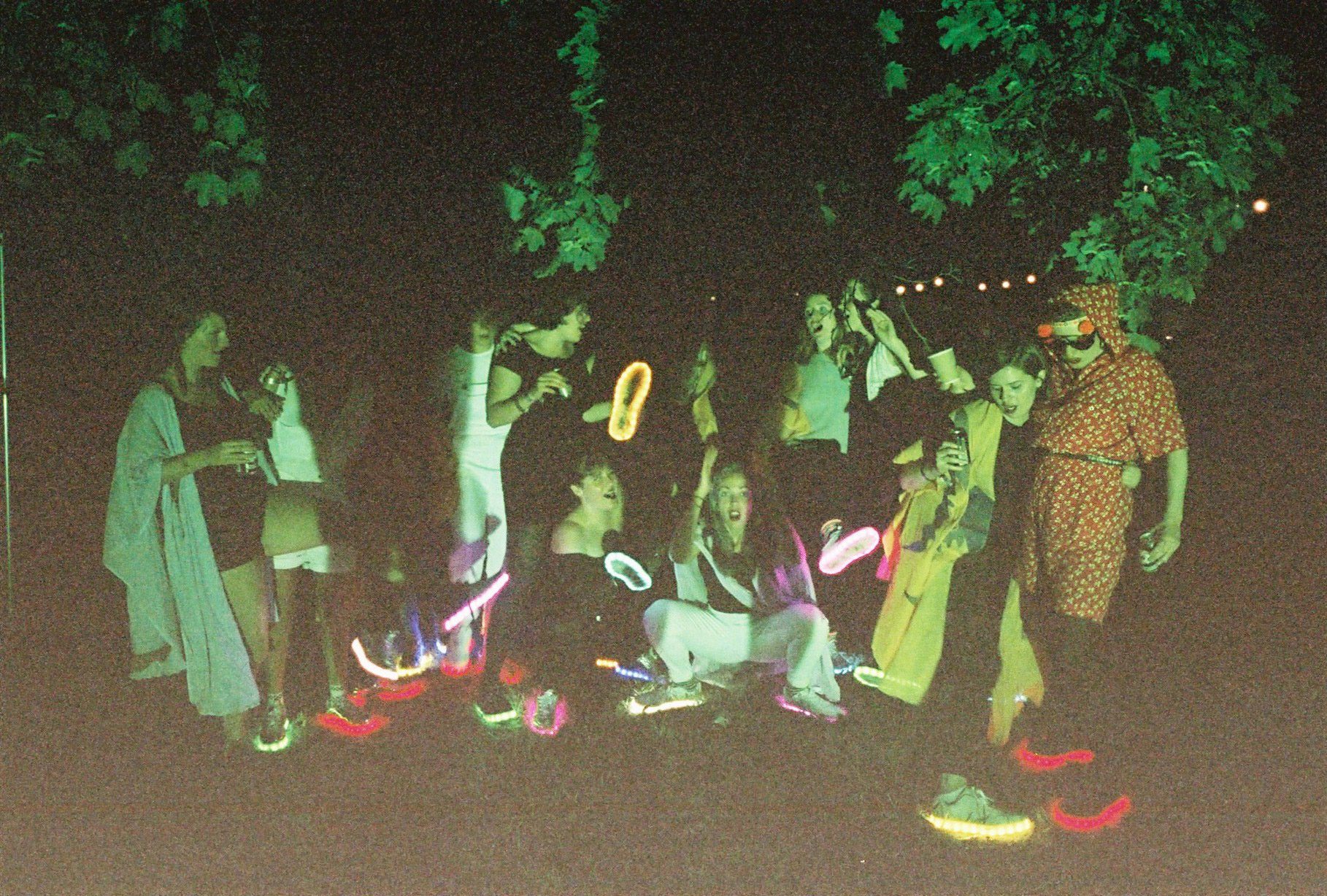 In an age of instant gratification and apocalyptic forecasts, Be OK feels like a much-needed antidote. It unfolds over repeated listens, the layered vocals transforming an idiosyncratic set of songs into something warm, fresh and comforting.

But it doesn’t feel like a collection of covers. It feels like a group of friends doing what comes naturally, sharing it with the world without caring too much what the world offers back.

“Regardless of what we put out, the community has a purpose now – it has legs,” Luisa says.

“There’s a strong connection there and people will want to continue getting together every week for a long time. There’s also a really good pool of musicians, so it’d be crazy not to take advantage of that, to jam things out and see where else we can take it.”

This week brings a new challenge: the choir has been tasked with performing a live set curated by legendary DJ outfit Horse Meat Disco.

For two sold-out shows at London’s Jazz Cafe, the collective will put their stamp on a mix of disco classics and underground oddities by the likes of Donna Summer, Candi Staton, Barbra Streisand and Q Lazzarus. 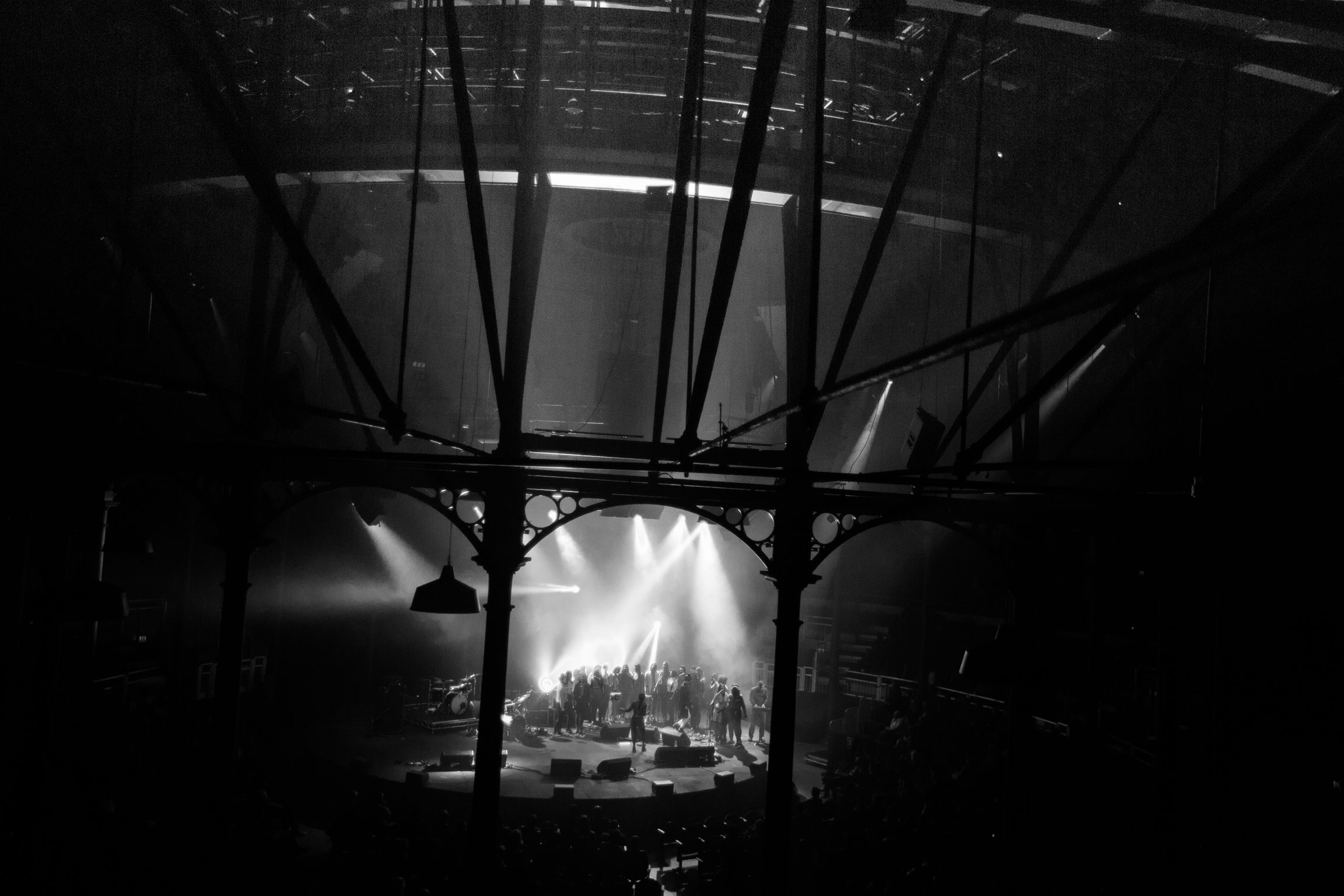 It’s an opportunity to show what they can do to a slightly different audience and introduce people to what is undeniably a memorable name.

“It started as a joke,” says Luisa. “But taken literally, it works. Deep. Singing.” She breaks into laughter.

“We did have a lot of discussions over the connotations and how we felt about being called that, whether people would misunderstand.

“Most people get the joke; it’s easy to see who we are and what we’re about. There are very few occasions where it causes the wrong kind of laugh.

“But ultimately we like the idea of reclaiming it. Maybe one day you’ll Google that and find empowered women singing empowered songs.”

Deep Throat Choir play Camden’s Jazz Cafe on 20 and 21 January.
Be OK is out on 17 February through Bella Union.

Linkedin
RELATED ARTICLES
OTHER ARTICLES
As the Criminal Bar Association enters its fifth week of action, criminal barrister Russel Fraser explains why the legal professionals have walked out and how action is likely to escalate.
As spiralling inflation sees a sharp rise in industrial action, hospitality staff in LGBTQ+ venues are demanding better pay and working conditions.
Last week, Tower Hamlets council removed its nudity-restricting licensing conditions in a huge win for London’s kink community.
A sharp increase in officers armed with the electrical weapon is resulting in serious injuries and deaths.
Ahead of the release of his new album, the producer reflects on his battle with drug use, getting into painting and what Madonna taught him.
The Conservative leadership contest has exposed an obvious truth: whether our next prime minister is a woman, or a British-Asian man, they will continue to fan the flames of division.