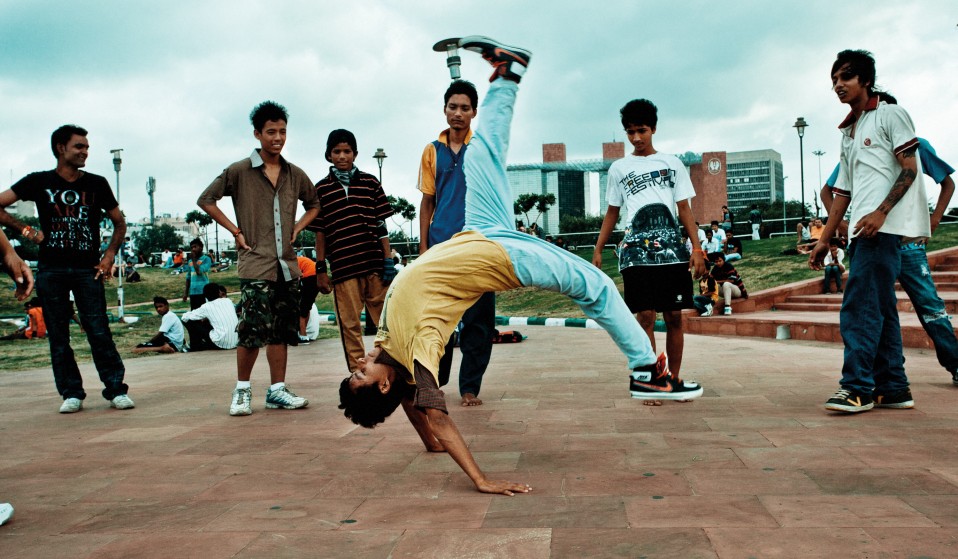 Think New York City is hip hop’s only home? Meet the b-boy pioneers determined to put India on the map.

Think New York City is hip hop’s only home? In cities across India, from Delhi to Mumbai, a new generation of b-boy pioneers are taking over abandoned spaces and transforming them into energetic block parties that transcend both caste and class.

A world away from the streets of New York, in abandoned spaces in Delhi and Mumbai, groups of b-boys are practising their moves. Over the last few years, dozens of crews have sprung up across India, rocking names like Slumgods, Roc Fresh Crew and Agnastik Crew. And it’s all thanks to a b-boy from the States called He Ra.

Netrapal Singh, aka He Ra, grew up immersed in New York hip hop. In October 2001, he and his mother were deported after their case for political asylum was rejected. In India, He Ra continued to dance in his spare time. Then one day, in 2007, he was invited to visit an after-school centre in the Dharavi slum and decided to start an impromptu throwdown. The kids joined in and b-boying project Tiny Drops was born.

With projects in Mumbai, Delhi and Dharavi, He Ra is constantly amazed by the talented kids who come to Tiny Drops to hang out and learn new moves – kids like local orphan, Rishi. “He’s a really quiet kid with a lot of soul,” explains He Ra. “He’s doing footwork and I’m like, ‘Where did you get that?’ and he’s like, ‘Oh, I just made it up.’”

For He Ra, the beauty of b-boying is that you don’t need money to join in; the kids dance anywhere, accompanied by hip hop tracks buzzing out of cheap mobile phones. “You can feel really lost here,” explains He Ra. “You’re just, like, one in 1.3 billion and you’re poor. It can feel a bit like, ‘Who are you? Who am I?’”

India is a country divided along hierarchical lines, but He Ra says b-boying gives the kids a way to connect: “It’s starting to break class and caste walls, because you’re connecting, like, ‘Yo, you rock a headspin, I rock a headspin!’ which is amazing. It’s just straight human-to-human communication that didn’t exist before. There used to be massive walls, but these kids are just obliterating them.”

Of course, there are those who see hip hop’s global spread as a form of ‘cultural imperialism’, but He Ra is quick to point out that similar Indian dance forms date back to the eighties. “I’m Punjabi and we also have a form of freestyling dance where we get down on the floor,” explains He Ra, who says he’s keen to help the kids embrace their own heritage.

And with plans to expand their programs to include filmmaking, music production and a multi-lingual hip hop magazine, Tiny Drops is determined to create a culture of its own. “Yesterday we were beat- making with a friend of mine who’s a deejay from LA and he was blown away,” says He Ra. “He was like, ‘Yo, how did they pick it up so fast?’ And I’m like, ‘Because, here, you have nothing else.’ If I was in New York I could do a million things, but here you’re like, ‘Give me anything and I’ll rock it.’”

This story originally appeared in Huck 31 – The No Heroes Issue.

For an update on this story, check out   tinydrops.org.