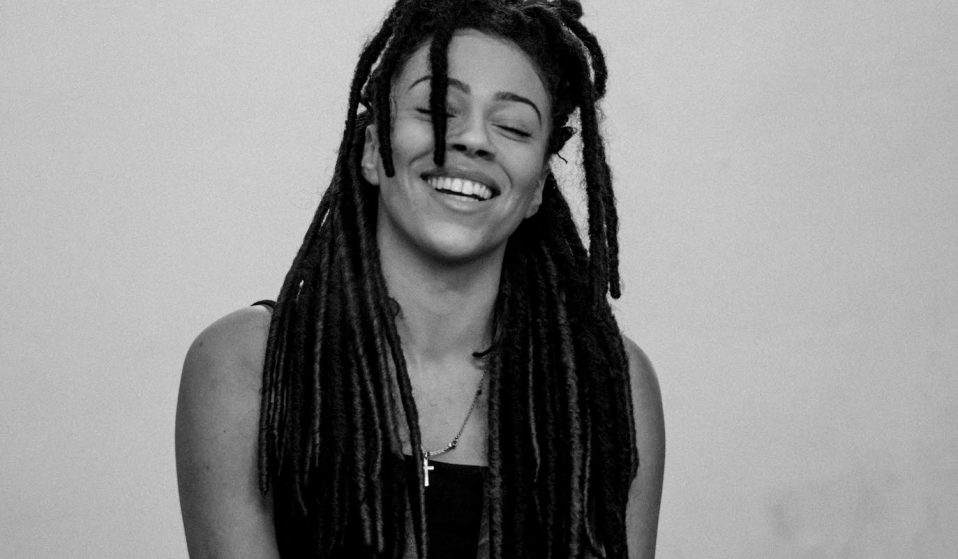 The winner of this year’s Welsh Music Prize speaks to Huck about overcoming hardship and finding her own sound within Wales' overlooked hip-hop scene.

The winner of this year’s Welsh Music Prize speaks to Huck about overcoming hardship and finding her own sound within Wales' overlooked hip-hop scene.

Deyah has covered more ground than the average 25 year old. Childhood trauma, pain, suffering. Addiction, loneliness, and more addiction. She has found God, nearly lost God, and lost a community of friends. She’s spiralled, spent time in rehab (again). And then, recovered. Renewed faith. She’s healing, giving, and growing. There’s health, there’s love, there’s optimism. You don’t need to speak with her to know this. It’s right there, in her music.

‘Deyah’ means ‘I’m there’. According to another source, it also means ‘from God’. It isn’t her real name, but it’s apt. “I’m a person of faith,” she says. In her Twitter bio, Deyah calls herself a disciple. “My purpose is to serve and do good by people, by sharing whatever it is I’ve learned,” she says. Deyah serves on the daily. Musically, through vivid bars, and in her 9 to 5 as a support work advocate: “I work with people who have learning disabilities and mental health illnesses.”

We’re speaking because Deyah recently won the Welsh Music Prize for her eight-track LP Care City, released last April. Despite being in its tenth year, she’s the first artist that isn’t loosely folk or indie to win the prize, one of two hip-hop/alternative RnB artists to ever be nominated, the only to be nominated twice, and the first non-white artist to win.

In Wales, the rap scene has been overlooked to the point of non-existence – until very recently. When Deyah was growing up on Cardiff’s outskirts, she knew one place that encouraged rap: Urban Circle, an independent youth arts organisation which allowed teens to use their on-site recording studio for free. Deyah found that in her mid-teens.

The musical education came from her dad, who would play music constantly – “but literally, like all through the night, it was sometimes annoying” – and school her on rap groups, sounds, samples, subgenres and anything else. The writing came partly from rhyming games her mum devised to cure boredom, and partly because, she explains: “My childhood was a bit mashed up. So, a lot of the time I would write stuff down to deal with it instead of going around punching other kids.”

“I failed all music classes up to GCSE,” she says with a nervous laugh. Deyah didn’t study music at all from there, instead studying theology, including Greek and Hebrew, with the intent of becoming a preacher or a minister. She studied at Newbold College of Higher Education in Bracknell, where she still lives today. At the time of writing, the university offers five courses all within biblical, theological and pastoral education. These are just some of the events that have shaped her.

“I think being unique is a blessing. It works very well for me: my music stands out. There were no other mixed-race women rappers in the area.” Standing out might have helped, but it’s Deyah’s ability that secured a spot on the radio.

The catharsis in Deyah’s writing never left. You can hear the refinement in how she speaks, too. Her tone is always warm yet matter-of-fact. The words are candid yet polished, full of reflection and core-hitting emotion, the result of someone who has spent a lot of time working out who they are. Along with preaching in church, her writing process also helps: “I usually know I have something I want to say, so I’ll listen through my beats until one compliments it. I’ll put it on surround sound, then I’ll walk around the flat getting lyrics off my head for an hour or so. Then I’ll sit and write.”

Care City is just the latest manifestation of this. It’s an album which encompasses many of themes explored on her previous record, Lover Loner, and  ‘Therapy Sessions 77’ – an 18-track album she uploaded to SoundCloud in 2017 under a former moniker, NONAMEDISCIPLE.

In total, Deyah’s output is 36 songs. She submits additional records monthly to radio stations “to keep airplay going”, and has a vault of 911 tracks – some unfinished, and some are “years old”.  The studio work generally comprises neo-soulful vocals, melancholy rap, and spoken word over enchanting beats (a combination of beat packs bought online and her own produced on GarageBand 2012) that evoke a sense of reflection, perhaps purgatory.

Then there’s Deyah’s Instagram, which is full of freestyles and hard, grime-adjacent bars (flexing French as well as English). In each instance her flow is unique, she can switch from grit to light in a nanosecond.

“It’s difficult. At the moment I’m known 50-50 for bars and the spoken shit. I’m trying to find my way of bringing hard bars into songs that don’t have to be associated with grime.” She says this not from frustration, more in awareness of where she wants to be and content with taking the time to get there. 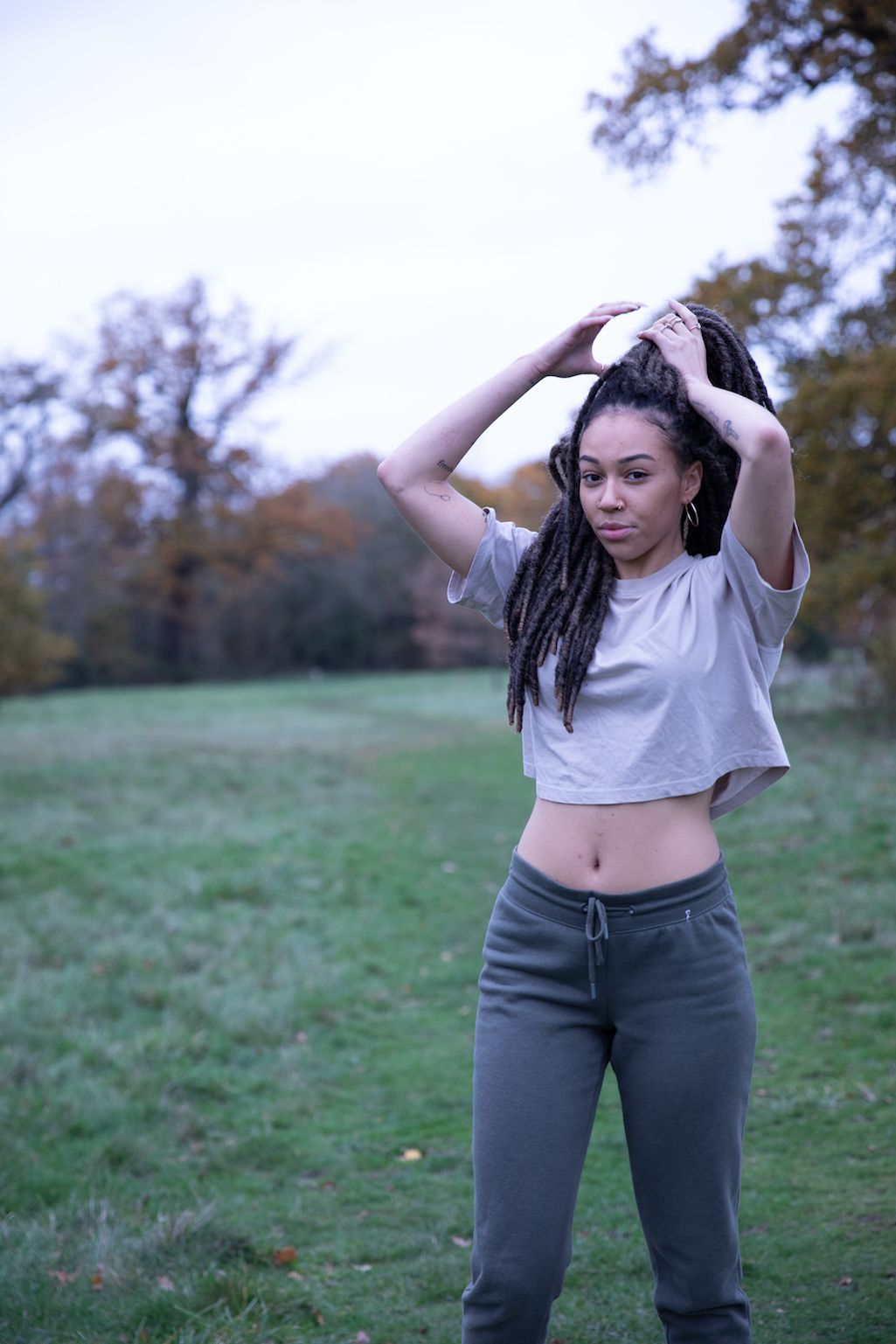 Deyah openly admits she doesn’t know the difference between trap and drill: “I don’t really listen to anything new because I don’t want to get swept up in it. I’m easily influenced.” Recently, she turned down collaborating on a track with a well-known drill rapper, because it isn’t her style. When I ask what she is listening to, she responds: “There’s a lot of suffering in old hip-hop, it has a real gift for making conscious lyrics super wavy – that speaks to me. In an ideal world, I want people to listen to a track and know it’s me because only I sound like that.”

One thing that unifies Deyah’s work is the lyrical content. “Everything in there is about me. It’s all raw, the only thing I change is the name of a person or place.” Care City was written during “one of the worst times” in Deyah’s life. “Honestly, last year I just didn’t turn up to work for months. My head was a bit warped.” She spent June 2019 to March 2020 recording a series of tracks about what she went through, which would become Care City.

It deals with being forced away from her church community, her subsequent spiral, the premature death of her pastor – her only friend left from that world, and bouncing back. The storytelling is kept general on the album, allowing listeners to take snippets of learned wisdom with them at ease.  The tone is set from the start, ‘Terminal 7 (Intro)’: ‘All hope seems swallowed into the orifice of the planet, but after dark, light does prevail.’

And the future does look bright for Deyah. There’s the award, of course, another EP in the works, mainly addressing “drugs and the reality of what I went through there”, and a load of other collaborations lined up.

“I want to utilise my day more. When you use drugs and alcohol as much as I did, everything becomes a blur. I had no concept of time,” she says. Being Deyah is to have high mileage, low life. Incidentally, that’s the name of her record company. So far, she’s the label’s only artist, but she’s fine with that. Her journey is just beginning.

Linkedin
RELATED ARTICLES
OTHER ARTICLES
Photographer Phyllis Christopher recalls capturing sex and protest at a time when the city had become a haven for the queer community.
A group of Ukrainians living in Poland are helping Ukraine withstand Russia’s brutal invasion by buying supplies and shipping them directly to the war’s frontlines.
The revered showbiz chronicler recalls his journalistic beginnings, documenting subcultural scraps in the ’80s.
Over the weekend, London locals came together to resist a pre-planned police raid targeting delivery drivers.
After news broke last week around an expected reversal of the 1973 landmark law that made abortion legal in the US, protestors gathered in the UK in support of American women.
Members of the collective share some of their reasons to run as part of #UnitedBySummits, a campaign that looks to uncover transformative power of the outdoors.