Art & Culture / A Difficult Truth: America is entrenched in a race war 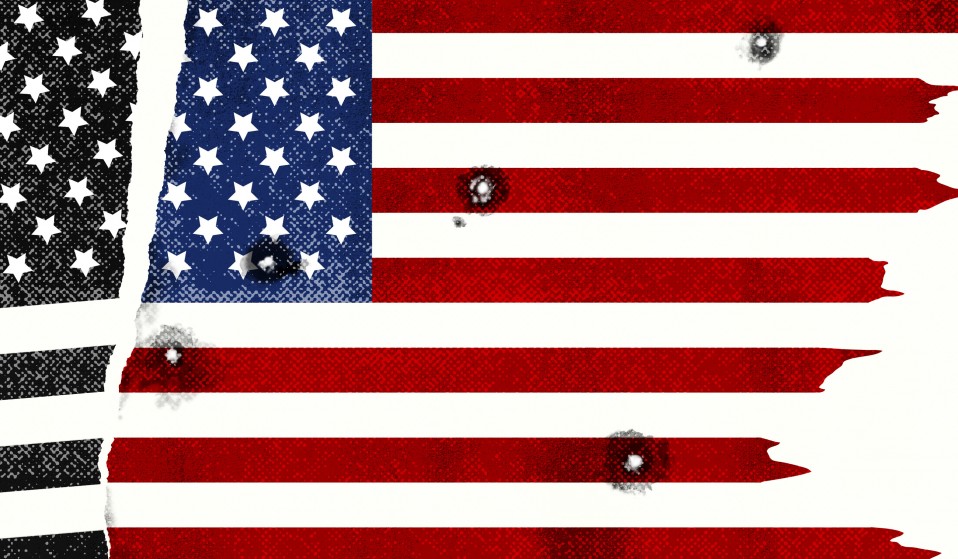 The shooting of Philando Castille in Minnesota and Alton Sterling in Baton Rouge are the latest chapter in a story of state violence that stretches back to the invention of 'race'.

The shooting of Philando Castille in Minnesota and Alton Sterling in Baton Rouge - black men killed at the hands of US police - are the latest chapter in a story of state violence that stretches back to the invention of 'race'. Now, after five police officers were shot and killed during a protest in Dallas, it's time to face a difficult home truth: America is at war.

The time has come to stop talking about “America” and to start talking about White America and Black America. All Americans, regardless of their phenotypes, fall into one camp or the other. The separation is essential because the moral, spiritual and physical destruction of Black America is one of the rocks upon which White America is founded and still functions. Without it, the edifice would never have been built and would have long ago crumbled to the ground. And when that foundation stone of broken black bodies shakes, as it does now, White America trembles with it. For this very reason it cannot remove that stone and elevate it, for to do so would undermine the corrupt but precisely calibrated integrity of the entire structure. And so White America makes a spectacle of its hand ringing, but it makes no move to alleviate the suffering of Black America.

The time has come to shrug off the pretense that White America cares for the wellbeing of its black citizens. Do not be deceived by all the thinking and praying White America does for its victims. Conspicuous caring is a modern delicacy; it fills newspapers and social media feeds with shock-and-awe triteness to show the generosity and faultlessness of two-faced empathy. You are not Trayvon Martin; you are not Michael Brown. America is one land divided by the colour of its skins, the features of its faces and the sins of its forefathers. The self-deception inherent in White America’s concept of unity is ancient immense. It has never bothered to differentiate unity from domination. 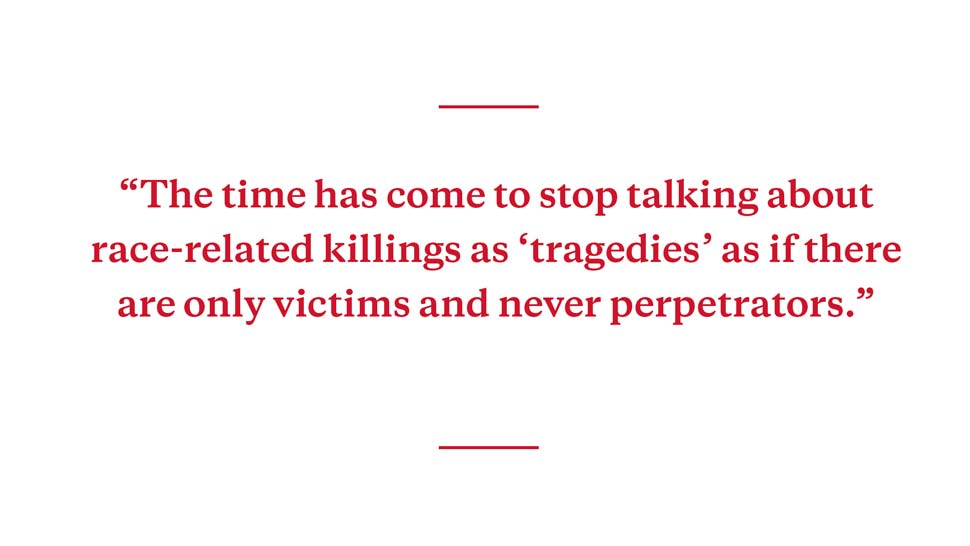 This is not a “black problem”; it is a problem thrust upon Black people but born in the hearts and minds of white people; this is a white problem. It is the particular pathology of the worldview that nurtured the global embrace of economic systems that rely on exploitation. It is the fear-driven will to dominate others for material gain. It is the willingness to assign arbitrary characteristics to large groups of people while simultaneously insisting on being judged as an individual. These are White traits, but not biological traits – biological determinism is another White invention. These are the obsessions of a nebulous, and ever-changing group of people and they can be unlearned.

The time has come to speak of genocide, from the millions slaughtered crossing the Middle Passage and the millions more broken in the concentration camps of the Old South, to the great black ghettos (named for their ancient Jewish counterparts, lest you forget) of the 20th century, and the incessant lynchings, by citizens, or police, that carry on to this day. Unless America reckons with this home-grown genocide – unless they force themselves to swallow the bitter medicine of their own depravity – they will not survive the fallout of this national nightmare.

The time has come to stop talking about race-related killings as “tragedies” as if there are only victims and never perpetrators. As if lightning bolts rain down from the heavens or holes open in the earth and smite random people walking down the street. An un-armed black man is killed by the police because of a complicated, but easily verifiable history of racism that energises the thoughts and actions of his killers. The Dallas police officers were killed by a gunman who wanted revenge for the fact that people he identified with had been getting slaughtered like animals in their own country since their first ancestors were brought there in chains. Neither type of killing is “senseless” or “unimaginable”; White America and Black America are at war and wars demand the destruction of lives. What has changed, indeed, is the nature of this war, in which White America has long held a monopoly on the moral imperative and the legitimate use of force. They are not killing more black men than usual; everyone else is simply more aware. And for the first time, their actions look less like a moral crusade and more like what they are: the desperate bid to fight off a tide of cultural change. Whether we use guns or keyboards, this is the war that will define this era of American history. 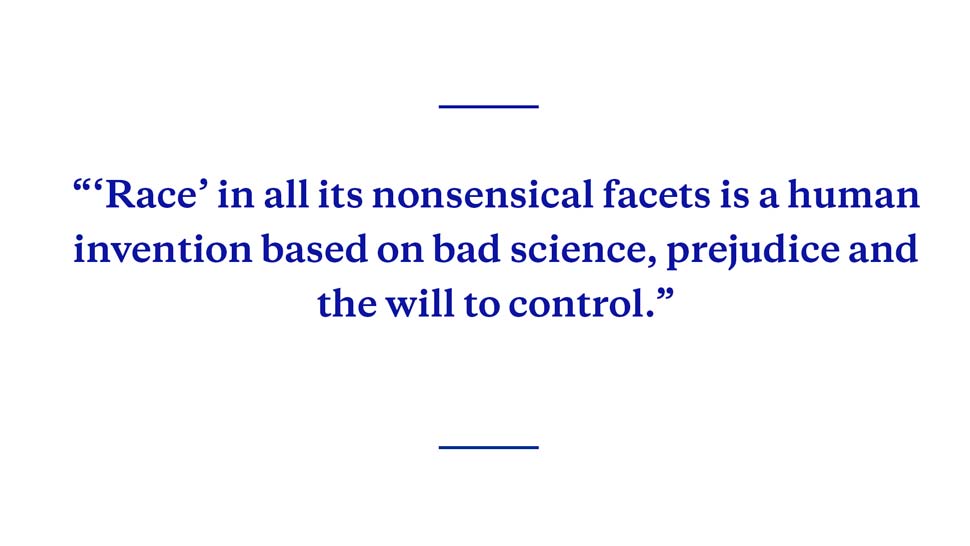 The time has come for black intellectuals to stop explaining themselves to white Americans, to stop bearing their souls in op ed pieces as if all that is needed is to convince White America of the depth of their suffering, and all will be healed. White America is blinded by its Aryan hero myths and its lust for “progress”. It has no room for black brothers, regardless of how eloquent they are. It can grudgingly accept a white man of African descent, but it can never accept a black man on his own cultural terms, because that would reveal the sham of Whiteness, destroy his carefully cultivated superiority complex. Blackness does not need to be explained: it flows from most of the best American art of the last 100 years. It is evident to anyone with the ears to hear it and the eyes to see it. It is Whiteness that needs accounting for.

It is long past time to begin the process of changing the way we talk about race. The myth of Whiteness – of some urr-colour of which all others are aberrations – is a lie that propagates while concealing the corruption of its own heart. It is the bludgeon that slowly destroys both those it labels as “Other,” and those who sit, fossilized and inured within its cosseting embrace. People look different, have always looked different, but “race” in all its nonsensical facets is a human invention based on bad science, prejudice and the will to control. We cannot ignore it anymore than we can ignore the history that begat it. But that which we have willed into being we can, with enough time and effort, unwill.

The time has come to stop viewing police as murderers and begin to see them as executioners carrying out the sentences imposed upon blacks by White America. Surely they are still culpable for their actions, but theirs is the culpability of the Auschwitz guard, the sharp point at the end of an entire machine bent on the destruction of a people. Their predations would not be possible without the immaculate sophistry of the lawyers who defend them, without the carefully neutral language of discriminatory drug laws and segregationist real estate policies, without the curious white monochrome of Hollywood. Every time they put another bullet into a black body they do so with the support, both tacit and overt, of the society they represent.

The time has come to stop elevating one type of murder over another. Black Americans have been fighting for life with White America – for the very right, supposedly inalienable, “to be” as unimpeachable men and women – every day for over 250 years. There can be no doubt that this is a war, one made no less real by the fact that the casualties have been disproportionately suffered by black Americans. Only in a country in which we can accept that the killing of police is (im)morally equivalent to the killing of unarmed black men, can we begin the search for a cure to our social ills.

Tetsuhiko Endo writes about race and the death of the American dream. He has a masters degree in Postcolonial Studies from the School of Oriental and African Studies but didn’t have the chops to get a PhD.

Linkedin
RELATED ARTICLES
OTHER ARTICLES
With the UK now set to run out of vaccines, people working in the sex industry – particularly outside of major cities – have been left especially vulnerable, reports Brit Dawson.
Students are being left to languish in unsafe housing, in some cases leading to serious health complications.
In the latest instalment of Photographers in Conversation, the creator talks portraiture, platforms and taking inspiration from Little Simz.
Photojournalist Fiora Garenzi spoke with people still living in Eastern Ukraine, an area which seen some of the heaviest fighting since the war began.
The author discusses her new memoir, which offers a sobering reflection on the racism and otherness she’s experienced along with a joyful celebration of her culinary heritage.
After rewriting the indie rulebook with her devastating songs about romantic longing, the singer-songwriter is now imagining a future in which the artist is no longer a product.