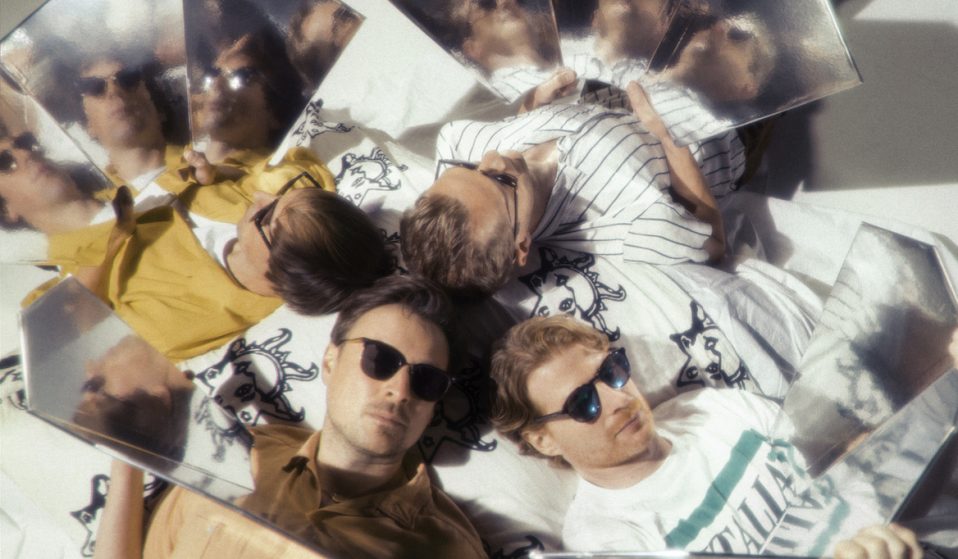 Founding band members Dave Maclean and Vinny Neff discuss the making of their latest album, Glowing in the Dark, and how the small mistakes that happen along the way often make for the best tracks.

Founding band members Dave Maclean and Vinny Neff discuss the making of their latest album, Glowing in the Dark, and how the small mistakes that happen along the way often make for the best tracks.

Django Django was born out of friendship. Like-minded people who liked to create, and to create together. They were pals with a purpose, with little clue on how to do things. After plugging a few instruments into the back of an old PC and pouring their significantly wide-ranging influences together for the best part of two years, the four guys who met at art college made an album. It propelled them into the indie spotlight.

Hailed as “boundlessly imaginative”, the self-titled first album signalled to the world the arrival of a slightly kooky, super-eclectic band who sound as comfortable on a playlist with Kraftwerk as they do the Rolling Stones. The preceding two records were also stacked high and wide with a library of sounds, a universe of ideas and references from folk to techno. Genre is quickly becoming a redundant term, but categorising this band has never happened. It has rewarded them with a sustained following both on wax and live.

Nine years and four albums on, the beat of their drum, coconut, gong, etcetera has not started to fade. They’ve described their latest album Glowing in the Dark as “coming full circle, the end of a chapter”. To mark the occasion, we sat down with founding members Dave Maclean (drums and production) and Vinny Neff (guitar and vocals) to see what they’ve learned from their journey so far.

You have to be in the room

Maclean: I go to the studio every day. It’s not like I get there at nine and leave at five, but you have to go in and make an attempt at something. If you don’t have the inspiration and you’re not in the mood, it’s important to go in anyway to be in the room. Even if you’re tidying up or painting a desk or writing stuff down while listening to things.

Neff: You have to go in. As long as you’re running the equipment and picking up a guitar, even if you spend the whole time just daydreaming about other things while messing around, it’s worthwhile. Something might click. For example, ‘Right the Wrongs’ was me going in to do a load of stuff for the label, but I started playing a little ascending chord thing on the organ. I wasn’t really thinking about what I was doing but it sounded nice so I figured I’d record it just to have for the future.

Maclean: Now more than ever, I’m quite brutal about deleting stuff. I think it’s important – albums can be eclectic but each song needs its own palette. I get rid of all my own stuff all the time. I like to let the track breathe a bit. It’s all about what the song needs. We’ve also got loads of good tracks that aren’t on the album, because the album doesn’t need them. Most of the music I listen to is stripped back, whether it’s techno or hip hop – the few elements there make the track. It takes confidence, I guess, to leave that and not over polish it.

Neff: Yeah, Dave is a bit of a reluctant drummer and similarly I’m not a precious guitar player; it’s a means to an end for me. For example, Dave did ‘The Ark’. It’s really fresh and doesn’t involve any of us. That’s cool, for me that’s pressure off, it isn’t personal. It also means that when we play live, we can swap and change stuff around. It’s all about trying to get the idea across and not being stuck to the place that you’re just meant to be in. As time has gone on, I’ve probably played less and less guitar. Instead, I find a place where I’m more useful for the record, whether it’s a bit of percussion or singing. 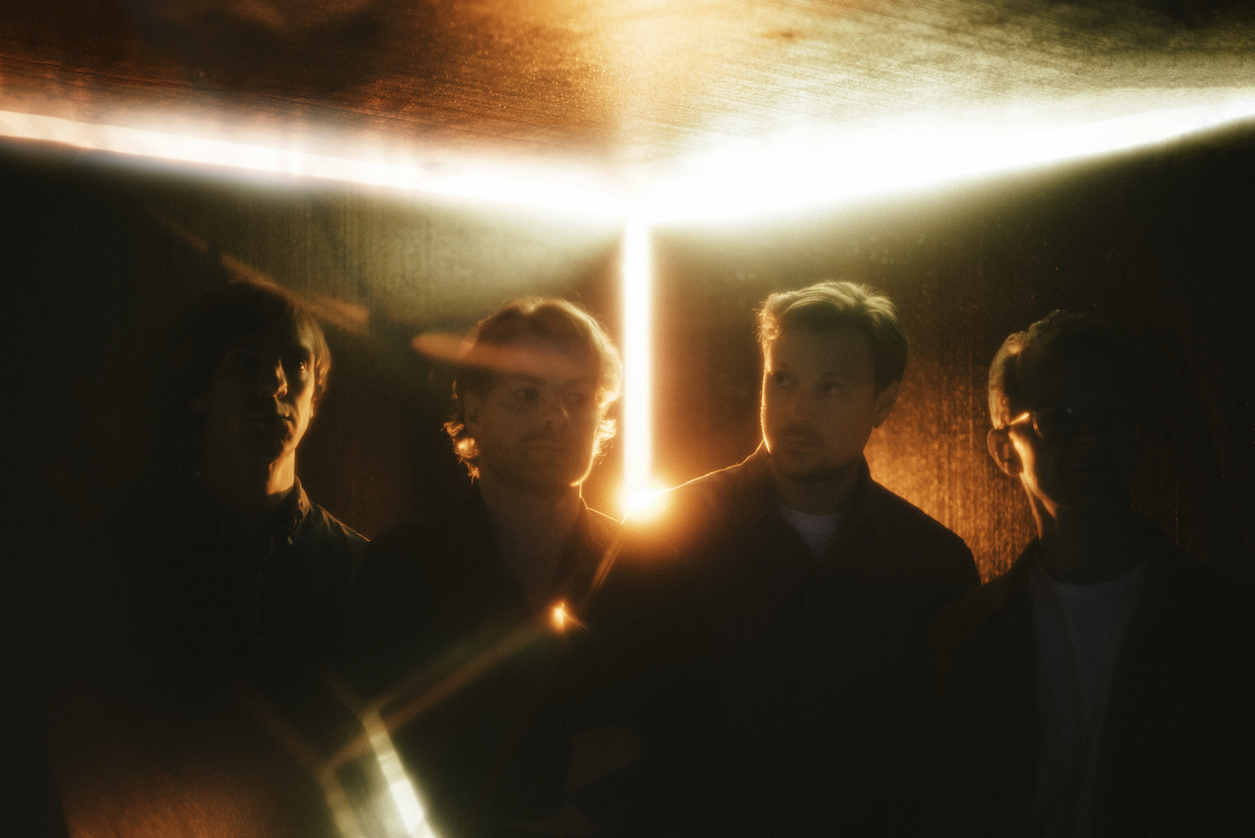 Let the song tell you what it wants

Maclean: I think we’ve learned that the journey is as important as the destination with our music, you know, it’s the little mistakes that happen along the way that make the tracks. It’s us messing around, asking, ‘What happens if we put this through that, and then hang the mic there’. We let the song dictate to us what it needs and wants, we don’t worry about genre, or how it’s going to turn out.

For me, it stems back to art college – there the fun was doing the painting in whatever way was needed, and not worrying about doing it ‘right’. Across all our music there have been instances where the end result wasn’t what we expected, but instead of forcing it, we went with whatever sounded better.

Neff: Say somebody goes to a chord that’s accidental but it sounds better than what we’d already come up with, we harness that. That’s the fun part of what you’re doing. Often you pull stuff across on the computer and it lands in the wrong place but sounds really good. Those accidents are sometimes the special moment in a song.

There’s no harm in arguing

Maclean: I don’t understand bands who split up because they argue about the music. If you didn’t argue you either wouldn’t get anywhere or you wouldn’t be passionate enough about it. You’d have to plod along accepting a crap drum track so that you don’t hurt someone’s feelings. We’re happy to argue all day, it’s really healthy because it stops passive-aggressiveness. It gets everything out in the open. Usually the person that’s most passionate about it or knows best will win and that’s good for the song.

I lived with Tommy (synth) for years and we’ve all known each other so long that we can happily just come in and have a big argument but then ten minutes later have a laugh over a cup of coffee you know? It’s just part of the process. We’re lucky in that way. We know each other’s limitations, but we also know it’s always about making the best piece of music.

Glowing in the Dark is out now on Because Music

Linkedin
RELATED ARTICLES
OTHER ARTICLES
For over a decade, gamblers have won big by employing people to place live bets from the court. But does this dubious method still work?
Photographer David Corio’s archive offers a glimpse inside a revolutionary era of music and nightlife.
Birdy Chu reflects on documenting the historic moment in which the territory was formally passed back from the UK to China.
Financial turmoil is pushing people who work in the sex industry into more dangerous and desperate situations as a means of survival.
Sean Maung’s photos are a love letter to the Black and brown communities that make up New York.
As the Scottish government announces a rent freeze, an activist with Living Rent who fought and won shares how they did it, and what must come next.