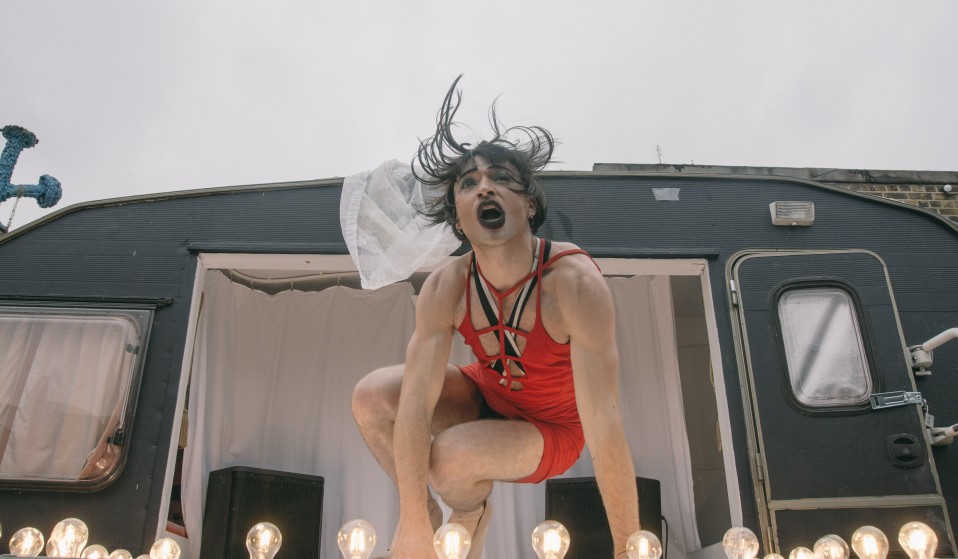 With LGBT venues, and nightlife more broadly under threat across the United Kingdom, one activist and performer has taken maters into his own hands.

LGBT venues, and nightlife more broadly, are under threat across the United Kingdom. It poses a threat to all of us, but for queer people the loss of spaces of sanctuary is even more alarming. Samuel Douek, a London based artist and performer, has created a travelling venue in a caravan that's exceeding his wildest dreams.

It was at 8pm on Saturday. After 15 hours of tirelessly running around, installing electrics, erecting gazebos, desperately avoiding the pouring rain all while rolling on and off of a soggy stage during a barrage of severely unrehearsed performances, I could finally take a moment to drink something behind the cheering crowds at the end of the second CAMP-er-VAN Spectacular, and pause for a moment of reflection.

Standing next to me was Johnny, another owner of a modified vehicle and my neighbour for the weekend at Peckham Festival in South London. As we looked towards the heaving voguing battle popping off in front of us, illuminated by the few lights on the caravan that had survived a stream of over-enthusiastic dancers, he leaned over and whispered something into my ear. “look at what you’ve done”, he said smiling. 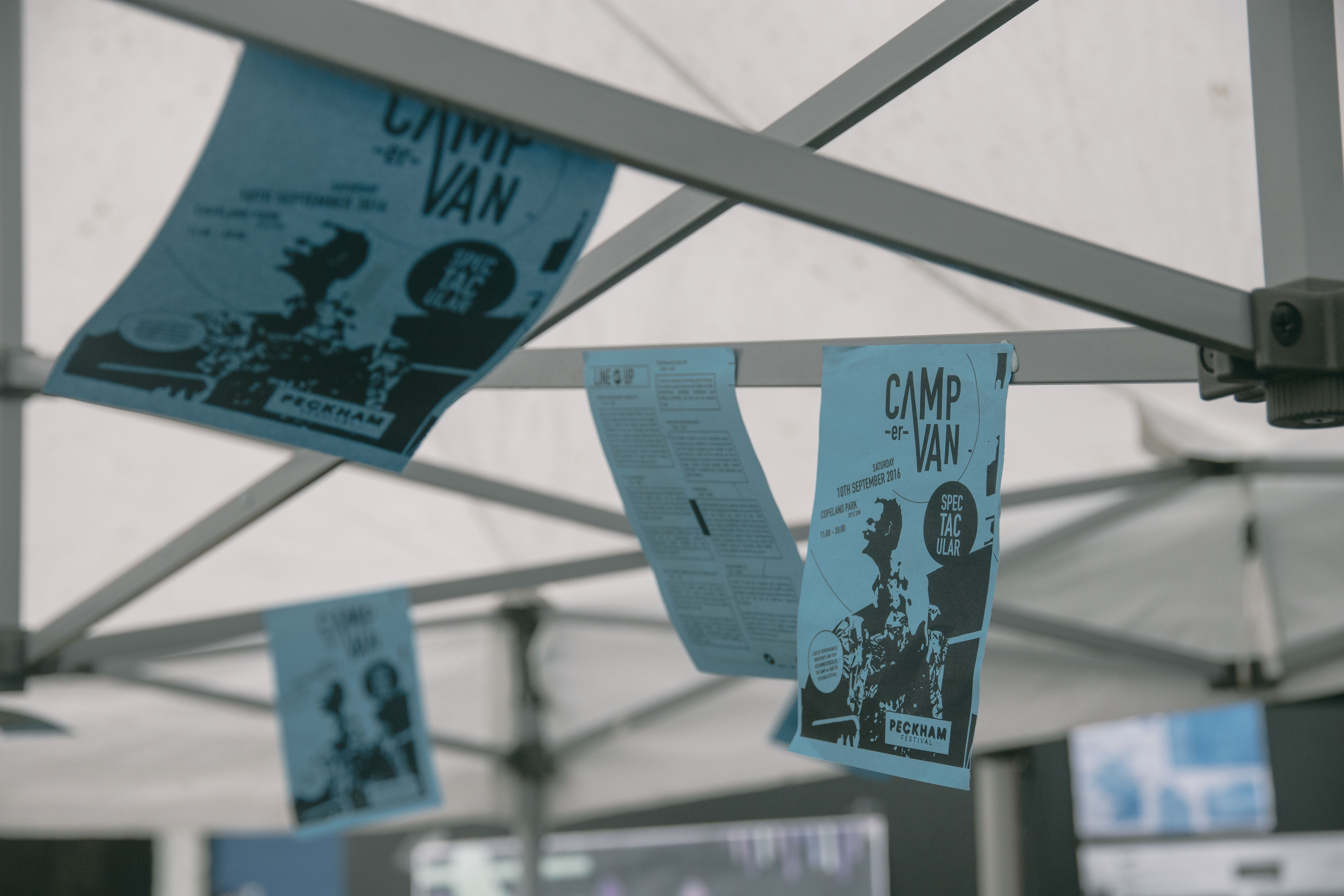 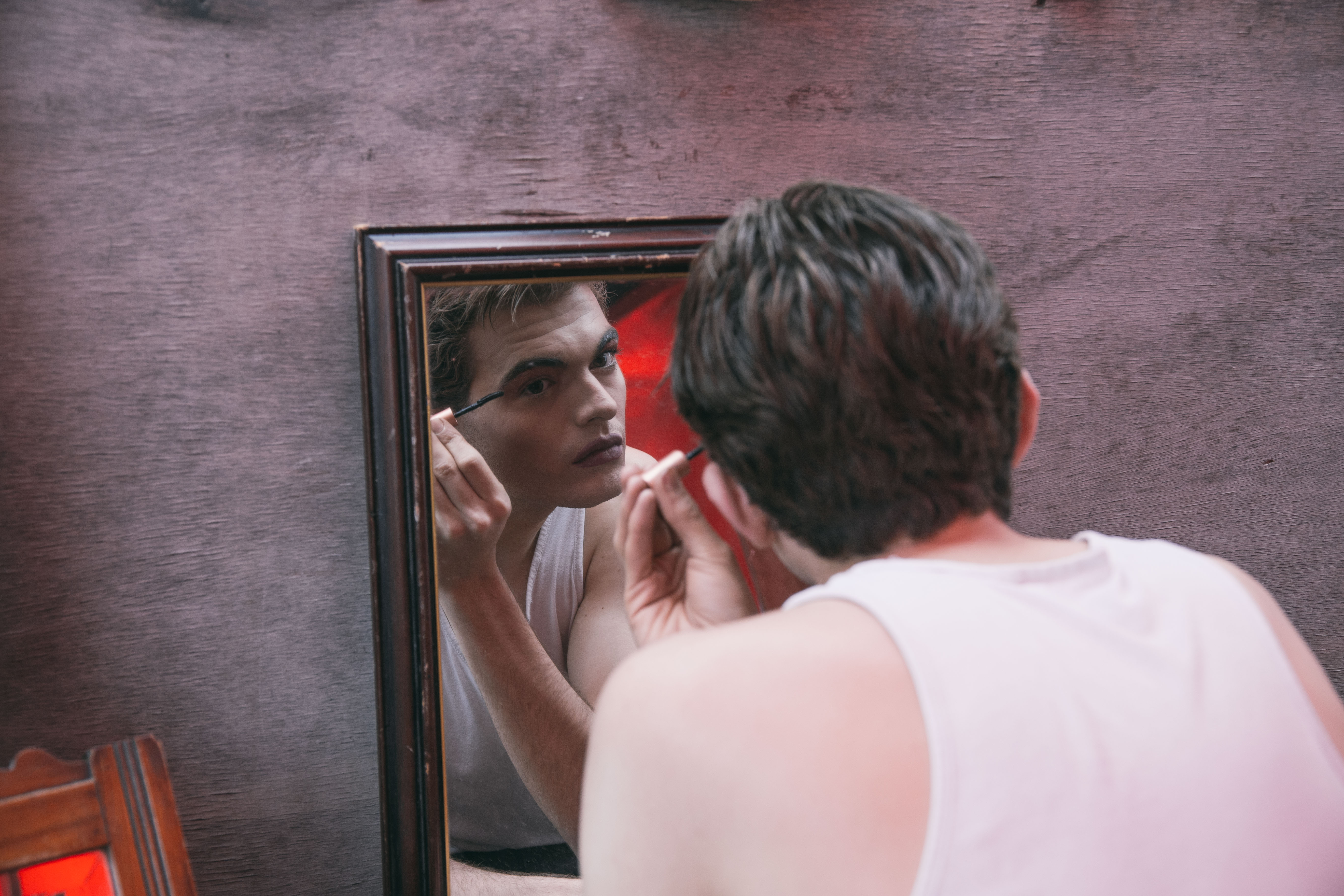 It was the first time that I had stopped to appreciate what exactly it is that has essentially taken over my life for the past seven months. It was the first time I realised that my ambitions for the CAMP-er-VAN had gone way above and beyond what I could have ever imagined them to be. And without sounding boastful, I felt proud.

In March, half way through the final year of my MA in Architecture at the Royal College of Art, I decided to purchase a caravan. Whilst at the time it felt like one of the most spontaneous and reckless things that I’ve ever done, it reality it was the culmination of two years of documentary filmmaking, research and writing about LGBTQ+ nightlife. 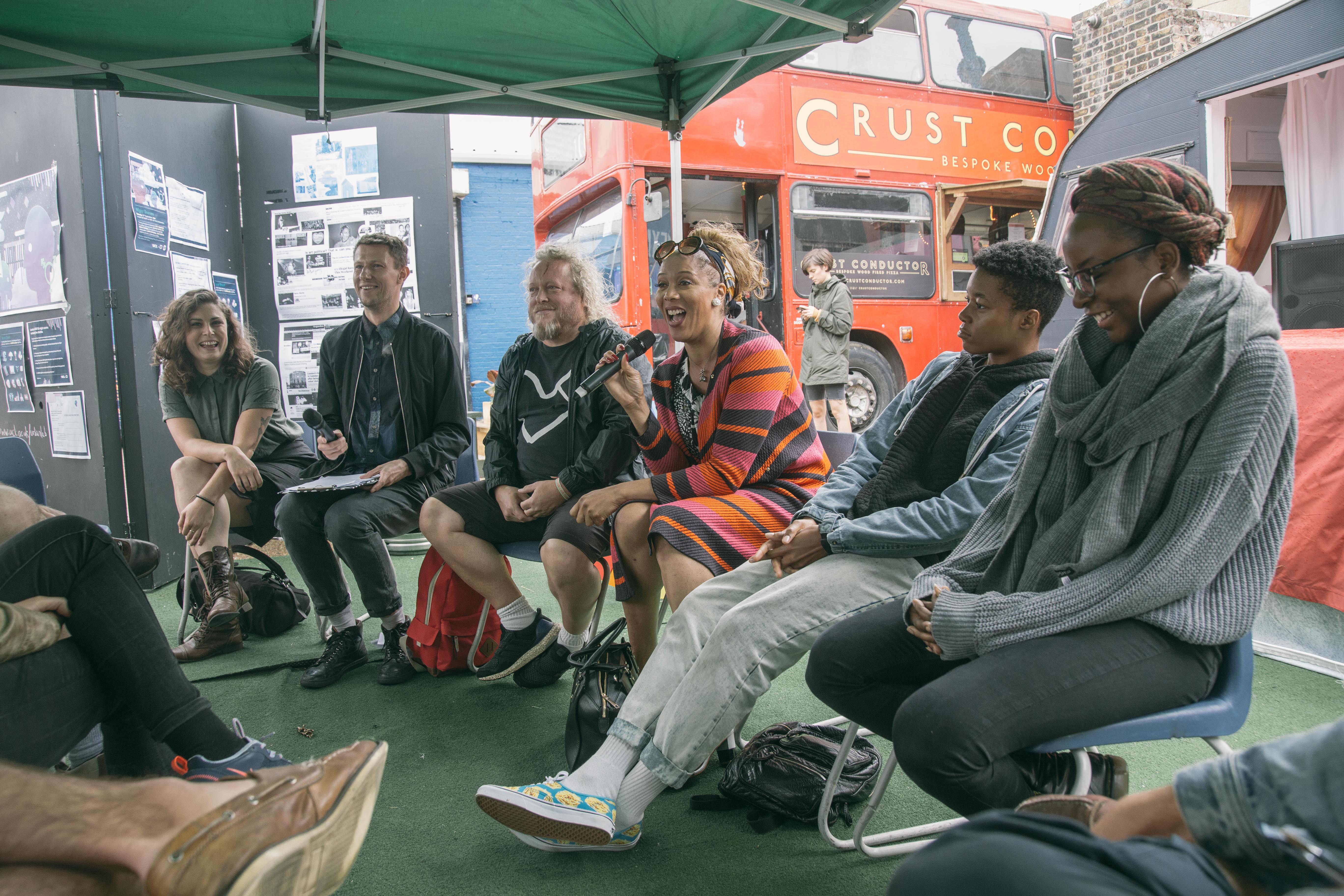 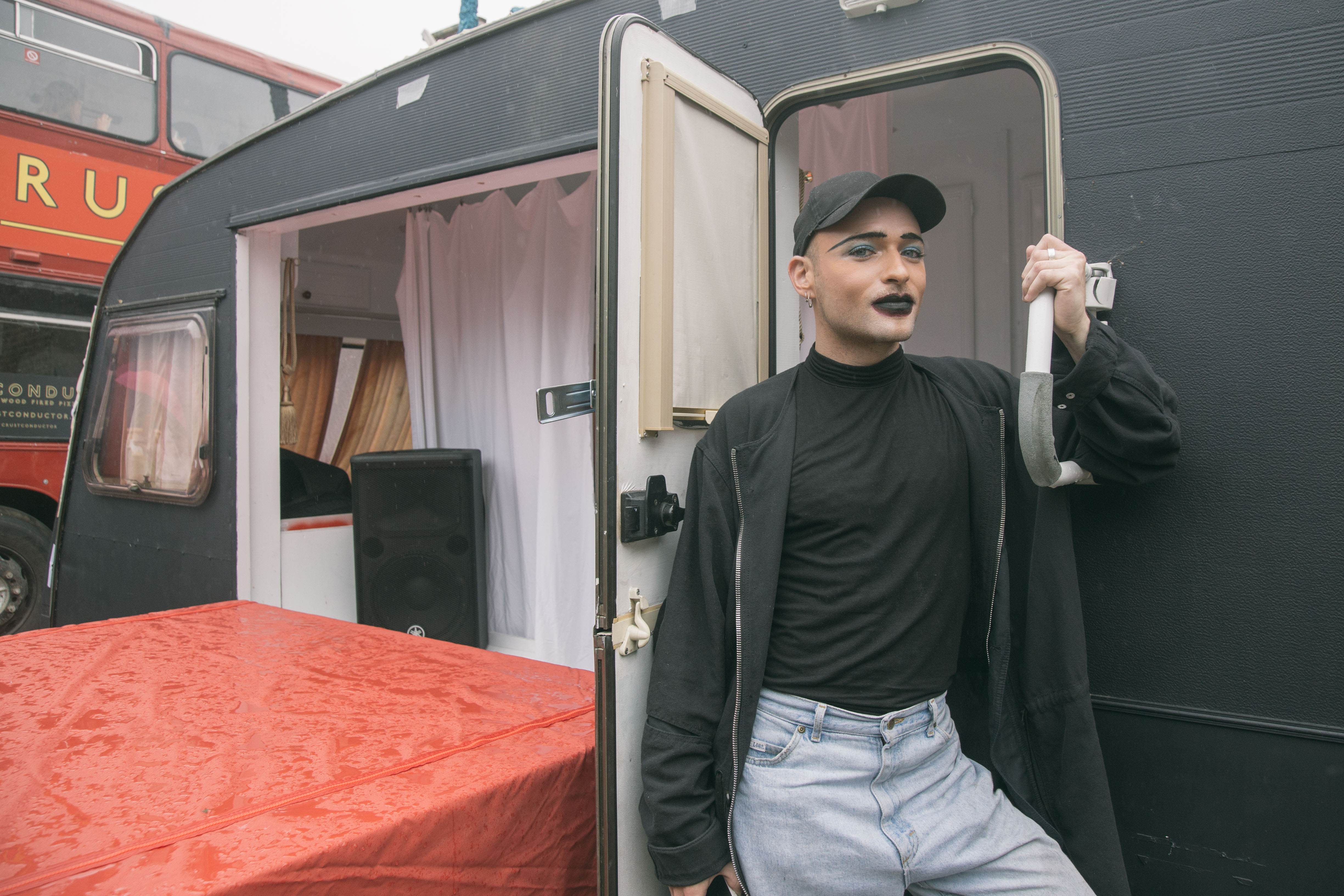 Initially, the desire to build my own queer space was a response to the ominous discourse that London was, and still is, experiencing an epidemic of sweeping closures when it comes to nightlife venues (a phenomenon that particularly affects the LGBTQ community who depend on these spaces for socialisation). But soon it evolved into an exercise in distilling the characteristics of queer space into fundamental principles extracted from my own personal experiences.

In October 2015, a close friend and I hosted the first BUM.P, a bi-monthly queer event, at Vogue Fabrics in Dalston, East London. Inspired by London’s inclusive cabaret and performance nights such as the infamous Bar Wotever at the Royal Vauxhall Tavern, and the quality dance nights such as Boom Box and Trailer Trash that dominated the East London scene in 2010, we aspired to create a place where anyone and everyone could lose themselves. 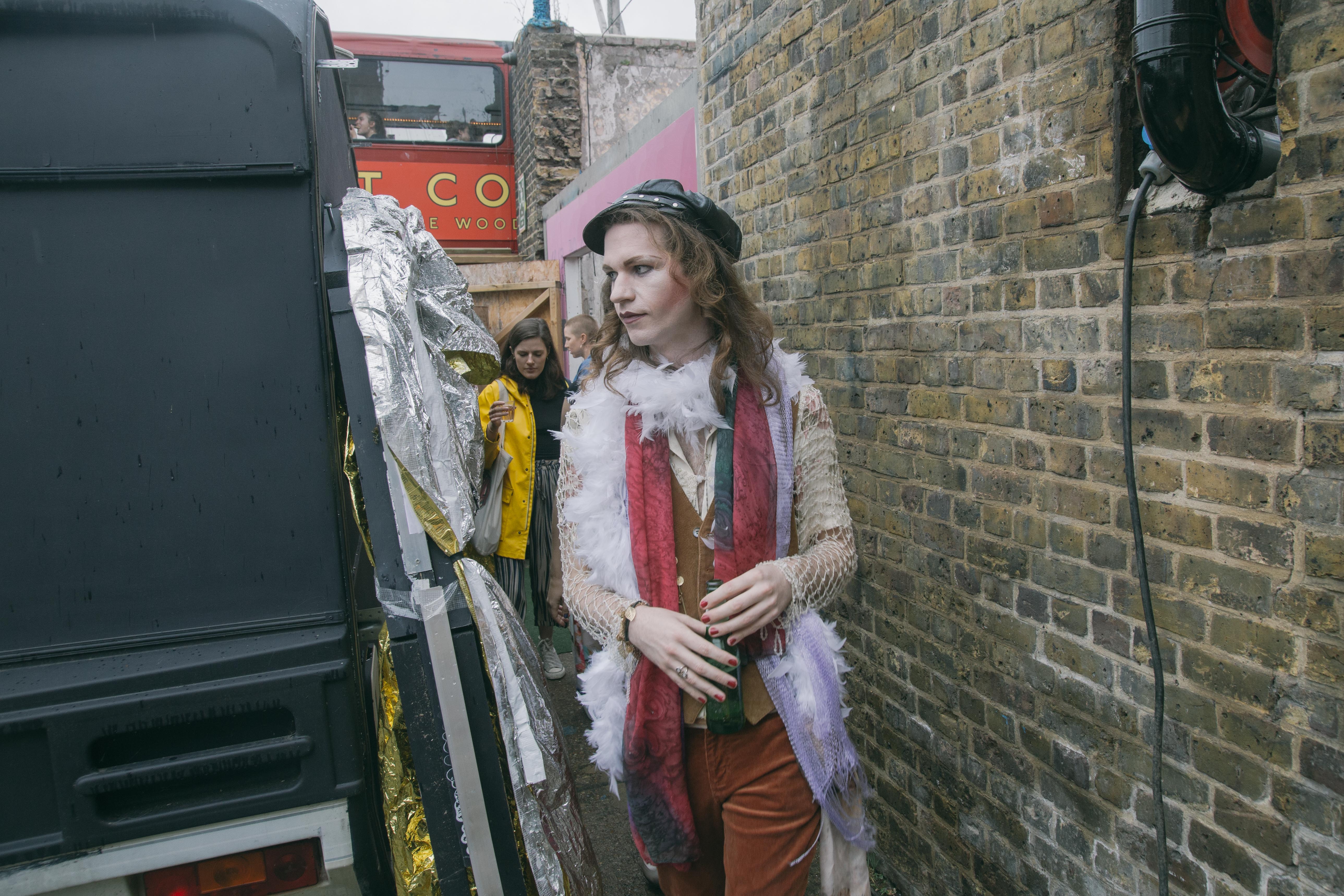 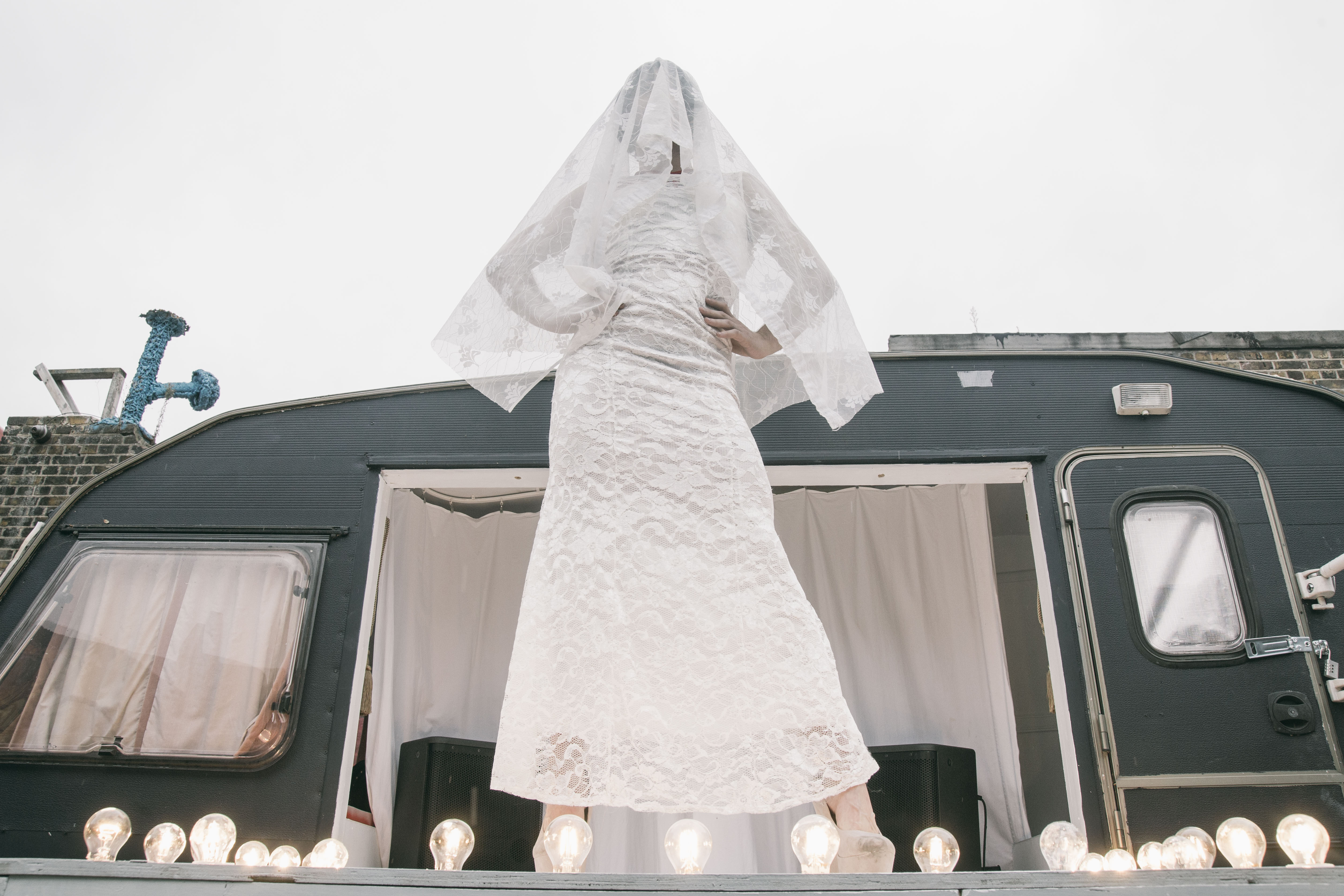 This is typical of many emerging nights that have appeared in the wake of the closure of permanent venues such as the George and Dragon and most recently, Fabric. However, while new, temporary nights and the ethics they promote should be celebrated, spatial ownership, the fact that the caravan would be mine, meant that it could theoretically be immune to the all too real threat of gentrification.

By appropriating the caravan, with its pejorative connotations, queer space becomes a process of reclamation; transforming what has been abandoned by mainstream culture, utilising its capabilities to deploy itself anywhere in the city or beyond. But how could the modification of a vehicle replicate the clubs where I had danced around in a leotard all night and met some of my closest friends? 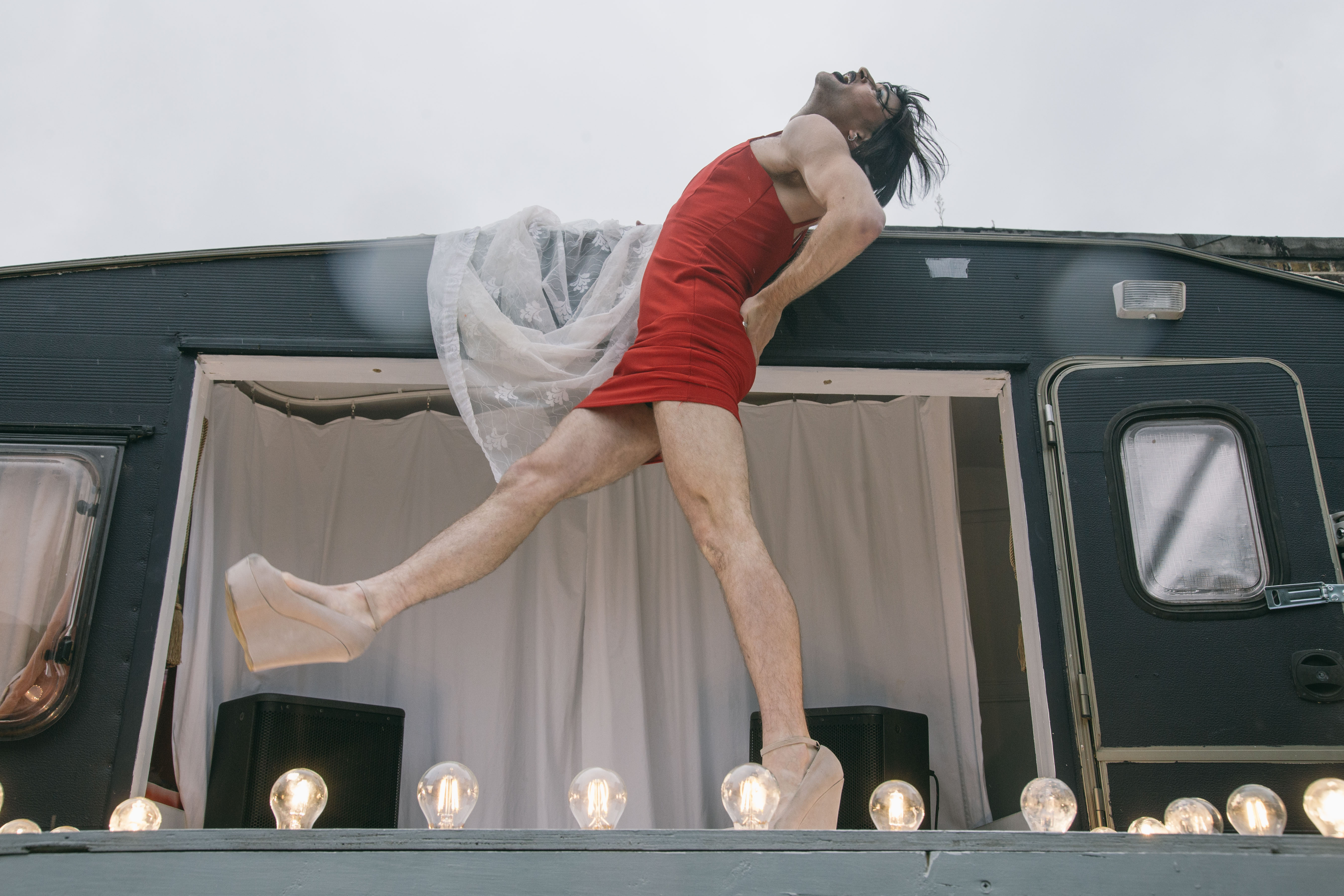 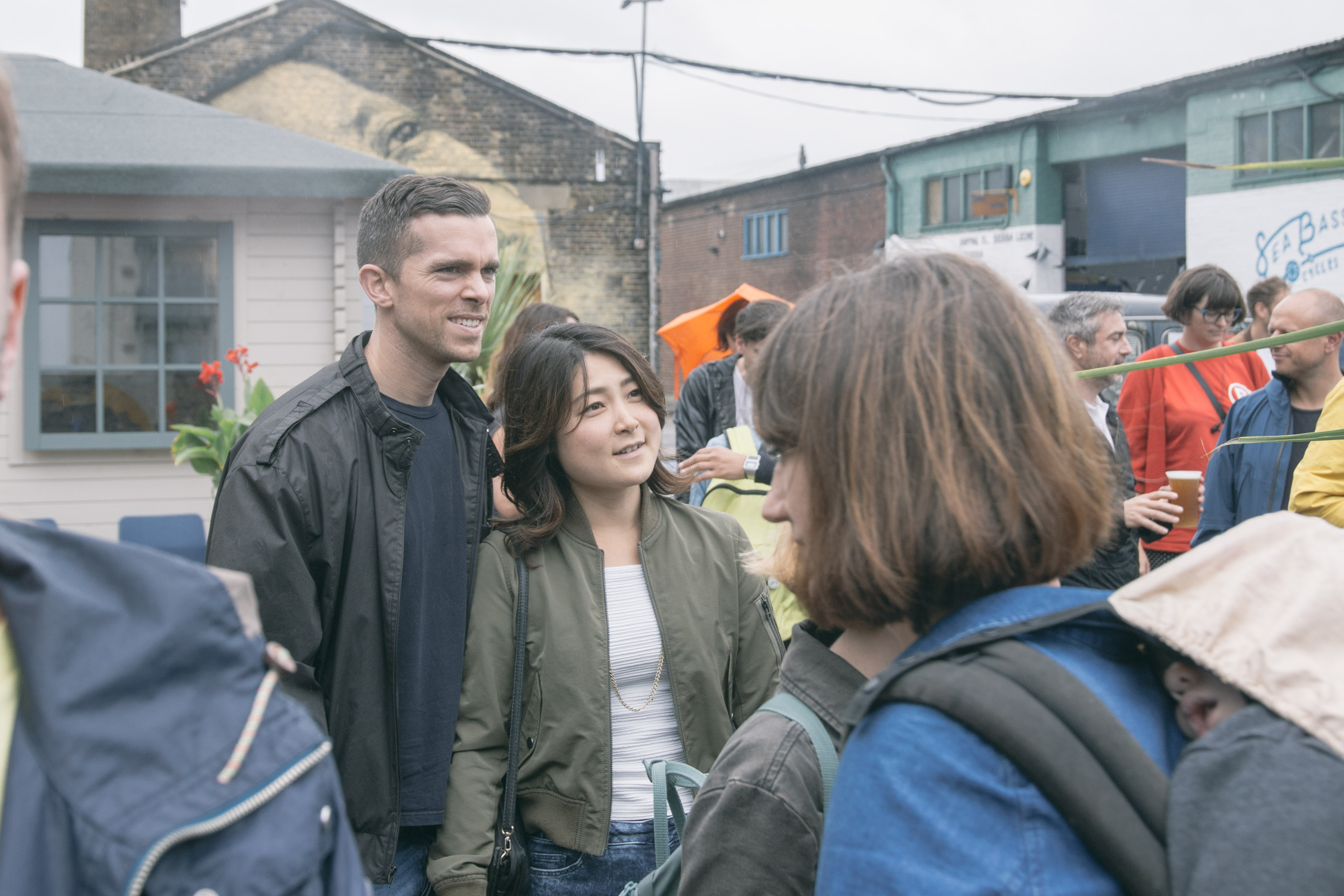 Well, the most fundamental modification was the provision of entertainment. So, equipped with a jigsaw I cut a large square out of the side of the caravan to install a hinged stage with lighting. Elevated from the audience, this platform facilitates all forms of self-expression as witnessed on Saturday, from drag to spoken word, rap to burlesque, attracting a wide and varied demographic.

But moving beyond this, queer spaces are not merely sites for entertainment, they also provide vital social support. The extendable translucent gold awning can partition space to provide intimate, private environments for workshops, film screenings and discussion groups. In a similar vein to the popular queer pubs of the 1990s, the CAMP-er-VAN becomes a nurturing site for local communities. 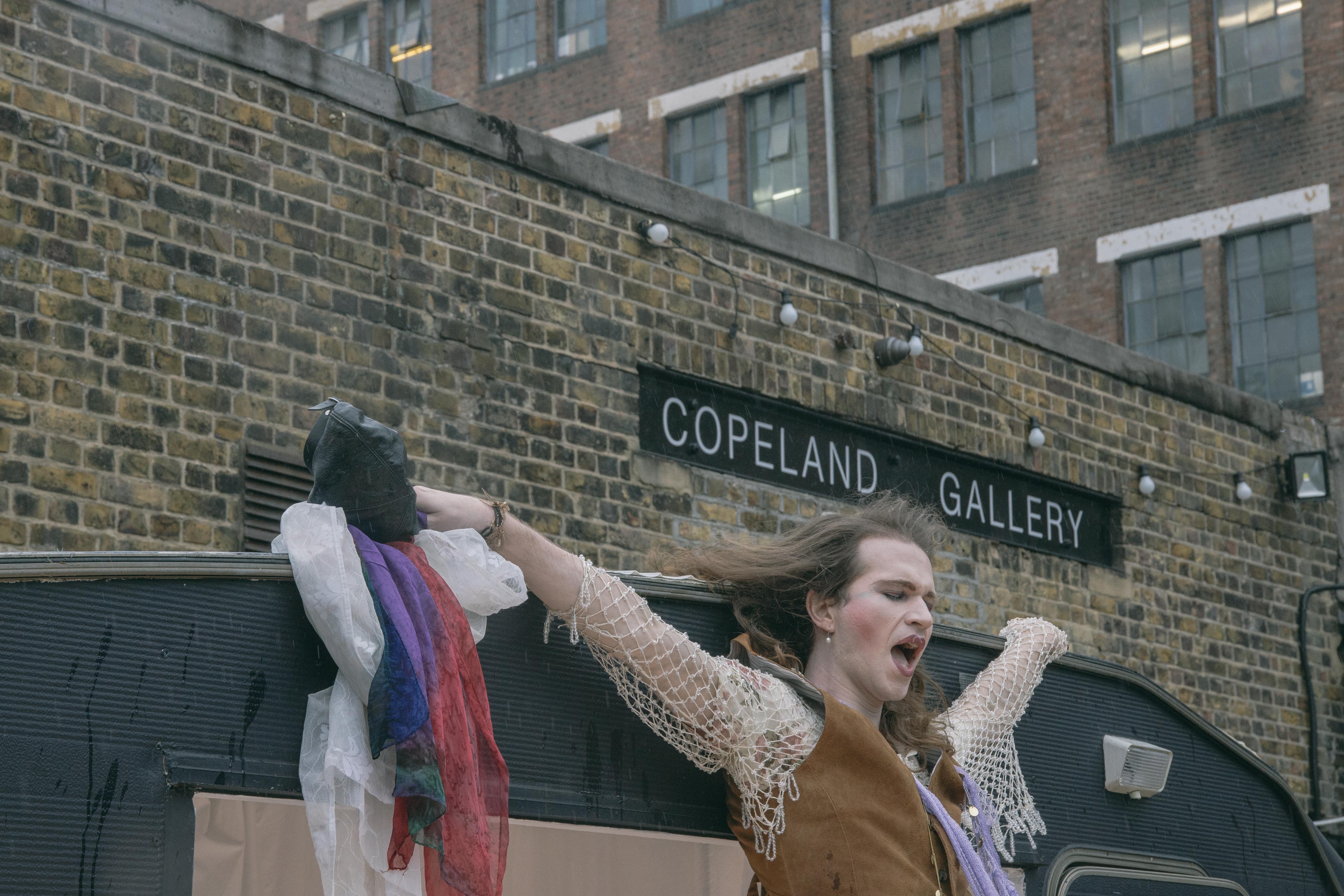 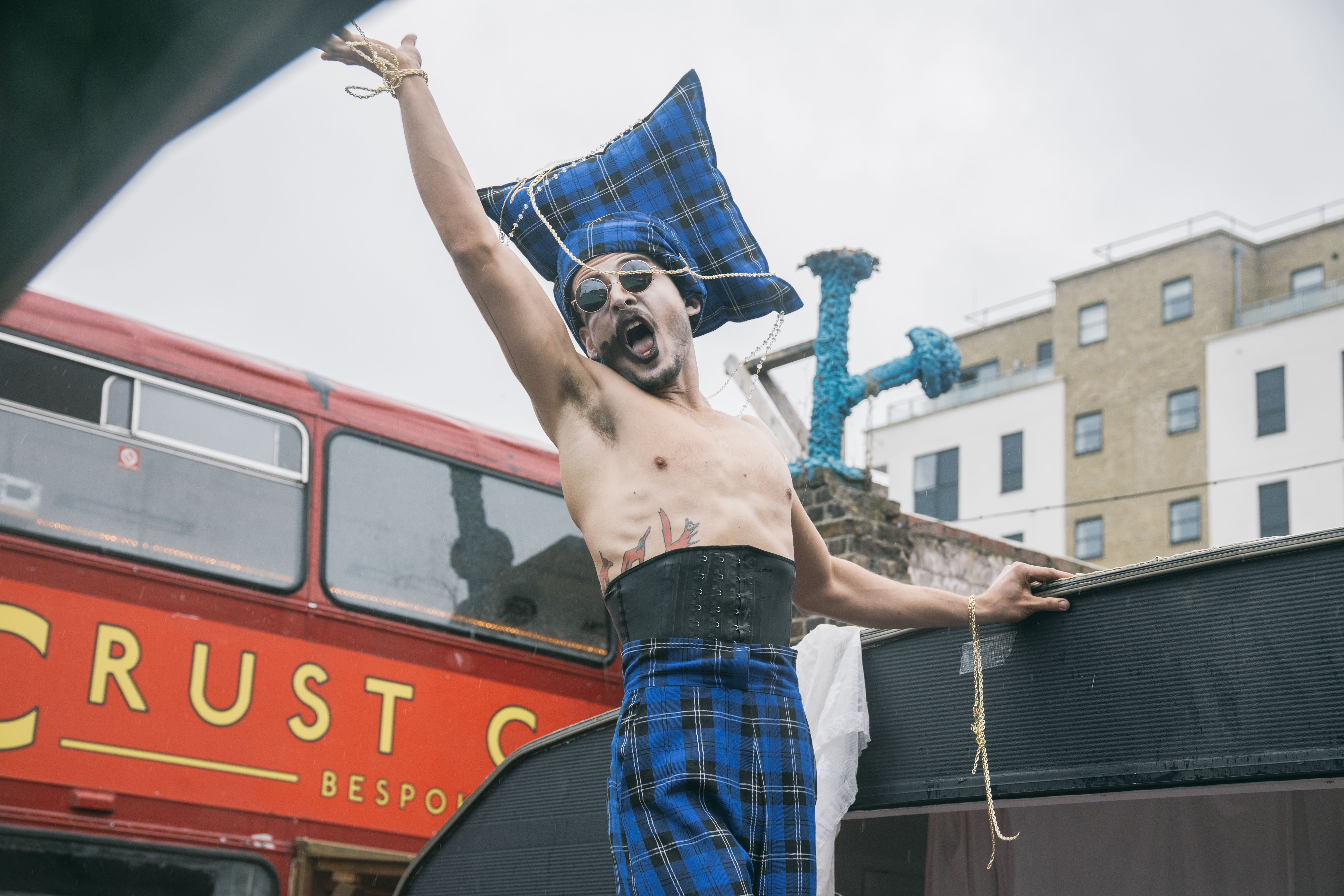 As I was packing away the CAMP-er-VAN in the late hours of Saturday night and Sunday morning, a friend of mine noted the respect and admiration of the audience towards the performers. So many people who passed by or came especially did not leave despite the horrendous weather, showing unimaginable support, and eventually immersing themselves in the raucous dancing of the voguing battle.

The fact that the CAMP-er-VAN, positioned in the middle of a busy, mainstream festival in Peckham on a rainy Saturday could command the attention and respect of anyone who came to witness the events, made me realise that the potential of this project is far greater than a response to a closure epidemic of queer venues in London. 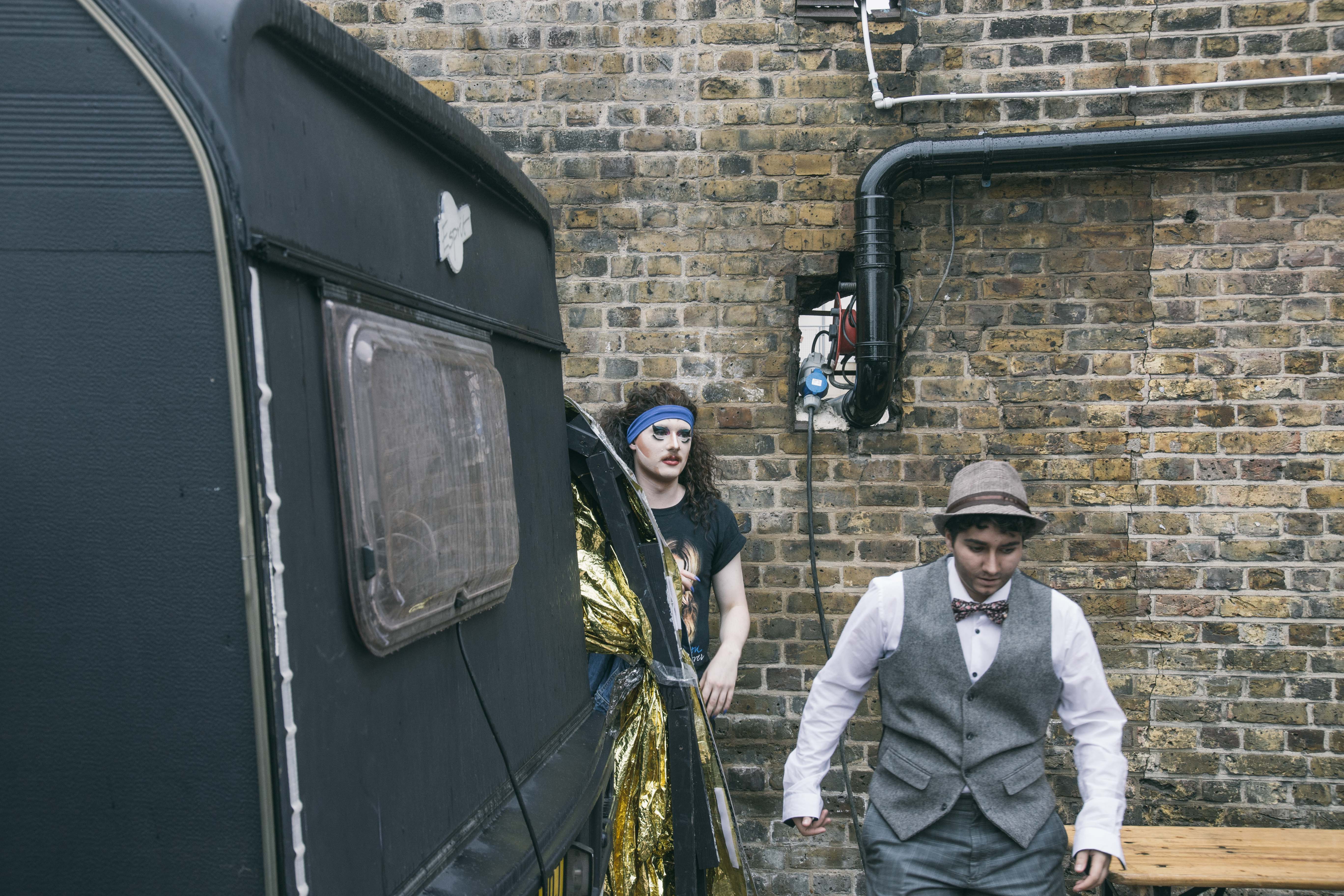 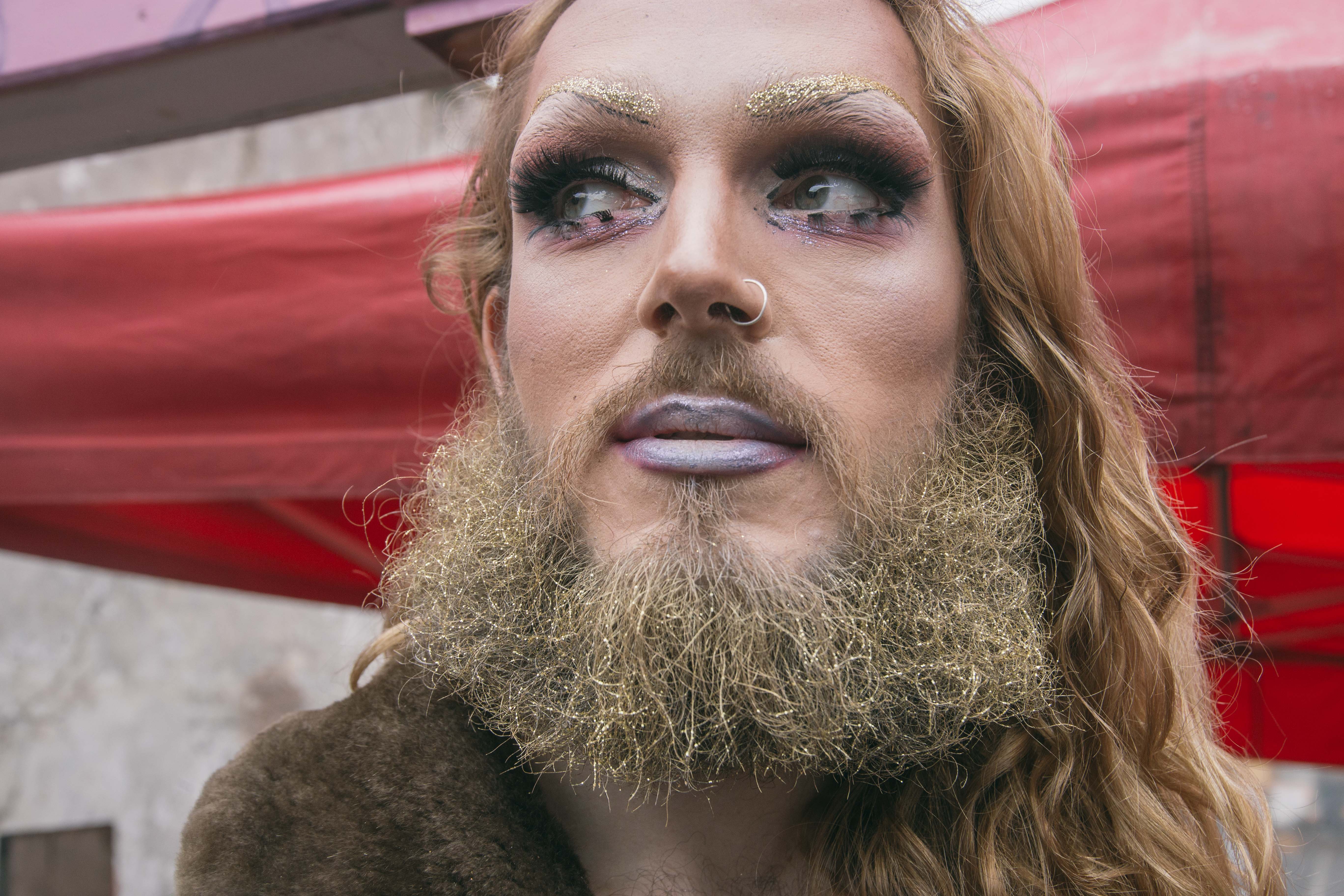 Now, as I look towards the applying for funding for a UK tour in 2017, during which I will travel to areas in the country that do not typically have access to queer performance, I reflect on what the process of designing and building the caravan has done for me.

Two years ago, I had never performed before. For me, spaces like the CAMP-er-VAN have given me the confidence to experiment without concern for how I am perceived by others. They have taught me to loathe the word tolerance and to only respect and admire things that I have never been exposed to before. In post-Brexit Britain, where xenophobia is on the rise, could spaces like this advocate for wider acceptance, where entertainment, social support and inclusivity can unite us in our diversity? I certainly hope so.

Linkedin
RELATED ARTICLES
OTHER ARTICLES
Thousands attended the annual event this year to wheelie through the city and call for ‘knives down, bikes up’.
Rhiannon Adam spent three months capturing an ageing society wracked by division, isolation, and the aftermath of scandal.
Birdy Chu reflects on documenting the historic moment in which the territory was formally passed back from the UK to China.
Sean Maung’s photos are a love letter to the Black and brown communities that make up New York.
With skyrocketing rents, packed out viewings, bidding wars and more, renting in London has never been harder.
Rogue landlords are exploiting young and inexperienced renters and leaving them in mental and financial turmoil, reports Niall Hignett.