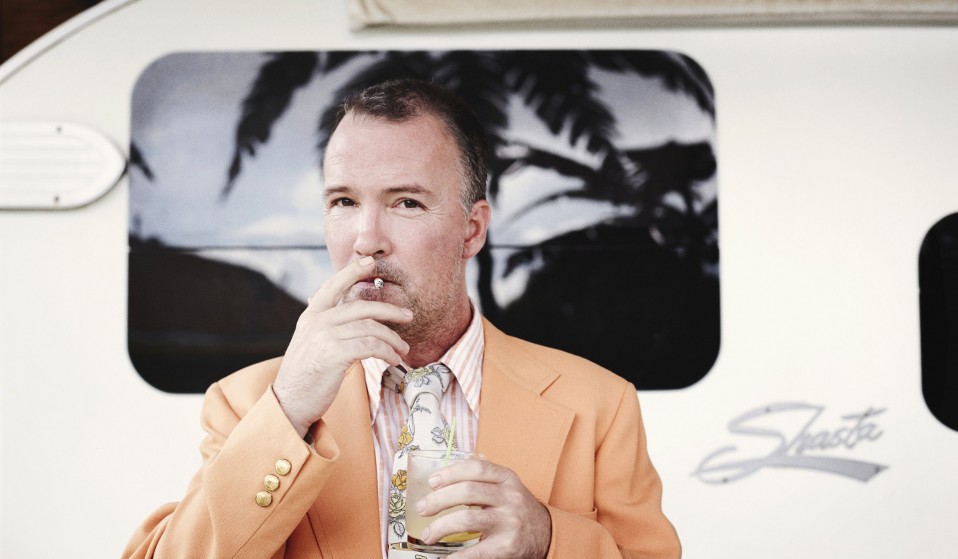 Comedian Doug Stanhope turned his back on LA for a 'tiny-ass town in the middle of nowhere'. It turned out to be the best career move he's ever made.

Comedian Doug Stanhope turned his back on LA for a 'tiny-ass town in the middle of nowhere'. It turned out to be the best career move he's ever made.

Doug Stanhope looks like a washed-up car salesman: the calamitous sort you might find bumbling around a Midwestern town in a Coen brothers film, a down-beaten figure who’s had enough with America and its false promises. But when you catch him on stage – always with a drink firmly in hand – Stanhope is one of the most incendiary and divisive comics you can encounter.

Any sense of apathy his appearance may give off is superseded by a biting wit and contempt for whatever he finds hypocritical, absurd or repugnant in life. As a self-described anarchist, Stanhope’s worldview makes him loathed by right-wing audiences. But nobody is free from the slaughter; no subject is considered off-limits. The comedian likens his shows to leading a crowd into battle – he knows they’re not all going to be there by the end.

Sat behind a desk of scattered papers with piles of esoteric junk and neon-bright walls, Stanhope is at home at his purpose-built compound in Bisbee, Arizona – a former mining town which has become a countercultural outpost for artists and hippies. He moved there 11 years ago to do things his own way. Rather than depend on the outside world for entertainment, he built ‘The Funhouse’ – a string of dwellings complete with its own sports bar – so that the party could come to him.

It’s an attitude he inherited from his mother Bonnie – a truck-driving, chain-smoking figure who took him along to her AA meetings as a child. Their unconventional relationship forms the basis of his new book, Digging Up Mother.

“My mom was so liberal with everything, she just let us be ourselves,” he says in his characteristically croaky voice. “We could smoke cigarettes and read Hustler magazine. I could bring my friends over to show how cool my mom was. There was probably a lot of bad parenting.” He breaks into a laugh. “… Although it was in my favour. I could get away with all the shit other kids couldn’t get away with.”

Bonnie was a fierce proponent of honesty and a disciplinarian in the “right areas”; someone who’d always talk to him the way she would to a peer. Bonnie joined her son in Bisbee, but over time her emphysema worsened until she decided to take her own life. When the time came, Stanhope was on hand to assist her – turning his mother’s final moments into a cocktail party. [He waited until the statute of limitations passed before sharing this story.]

At one point he tried to put his mother’s ashes on eBay, only to discover that selling human remains was a breach of policy. “By society’s standards, anyone would say she’s a shitty mother,” he says, cackling. “But it was that kind of shitty mother who made me who I am today.” 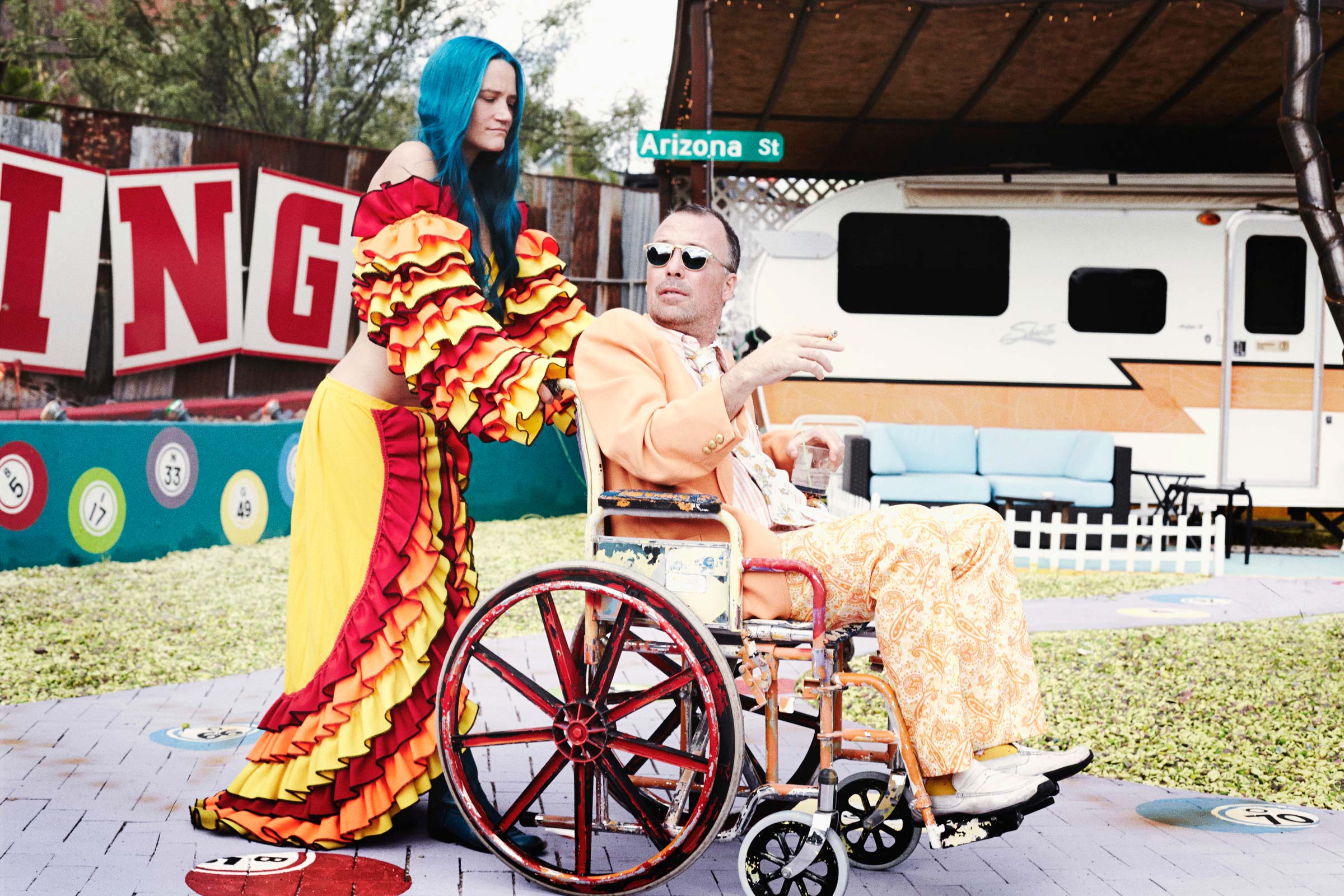 After pursuing a career in comedy, Stanhope quickly grew tired of trying to fit into LA’s world of late-night talk shows and industry kowtowing. “I sort of went from scratch and thought, ‘Let’s just try booking that bar down the street. Fuck this club [I’m playing in]. This club treats me like I should be wearing a nametag on stage. Let’s see what happens if we go down the street.’ That [attitude] just grew little by little over the years.”

While you may have seen Stanhope pop up on a breadth of shows, from Louis C.K.’s Louie to Charlie Brooker’s Screenwipe, he has no interest in fame. And according to Louis C.K., that makes his comedy a gift to the fans who eventually find him “in the shadows of the real world”. Stanhope’s team is lean: it’s just him and his manager, who doesn’t represent anyone else.

In LA, by contrast, Stanhope says agencies will sign as much talent as possible, leaving the comedians to do all their own legwork before taking the credit when someone strikes gold. “When I was making $125 a night, playing four nights a week and driving 800 miles, I was happy as shit,” he says. “I couldn’t believe I was getting by just doing this for a living.

When I did get a couple of TV shows, The Man Show in particular, I go, ‘This is horrible. I don’t want to do this; I want to do stand-up. I don’t have to live in [LA]. It’s fucking terrible here.’ So I moved to this tiny-ass town in the middle of nowhere and I’ve thrived in the industry by leaving it.”

Stanhope believes the showbiz culture he left behind over a decade ago has only grown more nefarious. He still can’t sit through a late-night talk show, even if it’s the only thing on TV – “I’d shoot the TV, like Elvis!” – and finds the idea of an adult aspiring to that world repulsive.

“The business model hasn’t changed,” he says. “There’s still that desperation to be famous. I didn’t move to Bisbee to make it big on TV. I’m not surrounded by fruitless ambition. When you talk to someone here, nobody is angling to further themselves in the industry. It’s just about getting together for the baseball.”

Check out Doug Stanhope’s website or order a signed copy of his book, Digging up Mother.

Linkedin
RELATED ARTICLES
OTHER ARTICLES
A new law change is enabling Britain’s donor-conceived children to know the truth about their origins – but campaigners say the fertility industry must do more to protect people.
Activists and campaigners are fighting back against new laws that would seriously undermine the ability to take industrial action, calling it an attack on fundamental workers' rights.
A recent High Court ruling against the right to wild camp in Dartmoor National Park sparked the largest land protest in history – and campaigners say their fight is not over yet.
AI companies that develop image-generators using copyrighted artwork from the internet are coming under fire from artists who say that it amounts to theft.
A new exhibitions brings together the work of photographers who documented the deep unrest of these pivotal decades.
Photographer Becky Tyrell went down to the fading banger and stock raceway to meet a community desperate to keep it alive.