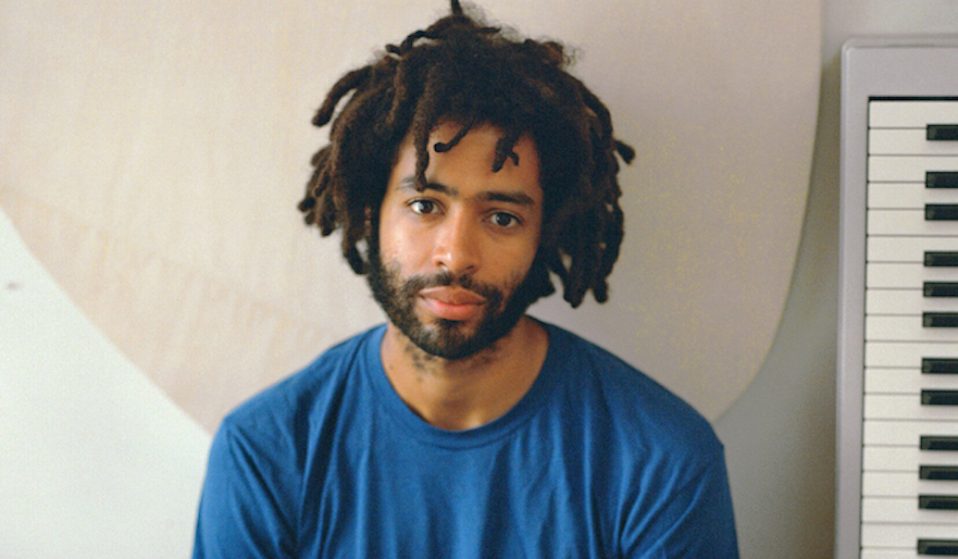 Ahead of the release of his new album with vocalist Rosie Lowe, the polymath artist reflects on incorporating his West African identity into his work.

Ahead of the release of his new album with vocalist Rosie Lowe, the multidisciplinary artist and pianist reflects on incorporating his West African identity into his work and carving out his own sound.

“I like my records to sound like my life. That’s why I always creatively involve the people in it, even if they’re not musicians,” Duval Timothy says. “There’s an atmosphere to each record, an instrumental narrative.”

Emotional nuances and fleeting interactions are the cornerstones of the 32-year-old musician and producer’s work. After self-releasing his debut LP, Dukobanti, in 2012, Timothy has gone on to build a committed following with an ensuing four piano-focused albums that trade in sparse yet engaging melodies interspersed with field recordings and voice samples from his loved ones in Britain and his father’s home country, Sierra Leone. His latest album is a collaborative endeavour with vocalist Rosie Lowe, entitled Son. The nine tracks are comprised almost entirely of vocal harmony, telling the story of a mother and son’s relationship through soaring melodies.

Initially trained as a visual artist, Timothy applies a conceptual sensibility to his works as well as his appearance. He always wears blue, in homage to the “blue borough” of Lewisham where he grew up. When we meet on an overcast afternoon in London’s Somerset House courtyard, he is true to form, striding over in a royal blue that cuts through the grey cobblestones.

Despite his statement clothing, though, Timothy is warm and unassuming in conversation. “Colour is all about concentration – the more of it you wear, the more intense it is,” he explains. Settling down at a nearby café, he tells me how his initial rejection of classical piano lessons as a child led him to learning and repeating chords from favourite songs by ear.

“Eventually these chords became songs in themselves, like a distillation of melodies,” he says. “I decided to record a selection on the piano at my parents’ home, which ended up being Dukobanti.” On its release, the record garnered hype from Bandcamp and Soundcloud communities who were drawn to its deceptive yet earworming minimalism. This drew him further into an interdisciplinary practice.

“I kept making music for myself once I graduated [from Central Saint Martins] and I started to see myself as a bit of an outsider in the art world, working in restaurants and shops and doing a bit of everything,” he says. That ‘bit of everything’ led to a successful supper club-cum-installation, the Groundnut Project, where Duval and two friends would cook food from the African diaspora in venues throughout south London, culminating in a 2015 installation at the Tate Modern’s Turbine Hall and cookbook.

But music still had a background pull, leading to the impromptu recording of his second album, Brown Loop, in 2016. “The food project was still happening and getting really busy at that point, so sitting at the piano felt like a chance to let off some steam,” he says. “Brown Loop was about visualising different frequencies, or notes, as primary colours that would then meld together in my head to make a form of muddied brown.” The result is a series of looping piano melodies that bring to mind rhythm-stripped versions of the formative ‘90s hip hop that Timothy grew up on.

The record was picked up for a vinyl pressing by an indie label and Timothy signed away his masters – a decision he would later come to regret and explore on 2020’s Help, which offered a searing critique of the music industry.

At the time, though, he was busy exploring his heritage and incorporating it further into his work. “I went to Sierra Leone a few times when I was a kid, but it was on a trip when I was 16 that it really blew my mind,” he says, smiling. “Me, my brother and sister all said that one day we would move back and so when I got a bit older, I decided to start spending more time there and ultimately to build a studio in my grandma’s house.”

He made his first solo trip to Freetown in 2016. “It was really emotional because I just had a ticket out and I didn’t know what was waiting for me when I got there or when I was coming back,” he says. Luckily, the experience was revivifying and ever since, Timothy has split his time between London and Freetown, making music in both places.

“Every time I go back I get a slightly different and more nuanced take on it,” he says, pausing for thought. “When we were 16 I remember riding in the back of a car with my brother and people were just screaming out, ‘Hey white boy’ to us, which was a bit of a shock. I’ve got a really strong connection there but people can of course see I’m not ‘from’ there, which makes you forge this new relationship with yourself. It feels like you’re being pushed away sometimes.”

It is an experience any child of the diaspora can relate to and one that has ultimately led to some of Timothy’s strongest and most popular work to date: 2017’s album Sen Am and 2018’s 2 Sim. Both records explore this cross-cultural mix, with the former interweaving beds of piano melody with fragmented WhatsApp voice notes, and the latter takes its name from the Sierra Leonean nickname for expats who have two sim cards to communicate with their various countries of origin.

“For 2 Sim, I wanted to interview everyone I knew in Freetown who had a similar experience to me and it made me start to accept the reality of my situation,” he says. “I’m proud to be Sierra Leonean but I’m also a Londoner and a person that goes between those places.” 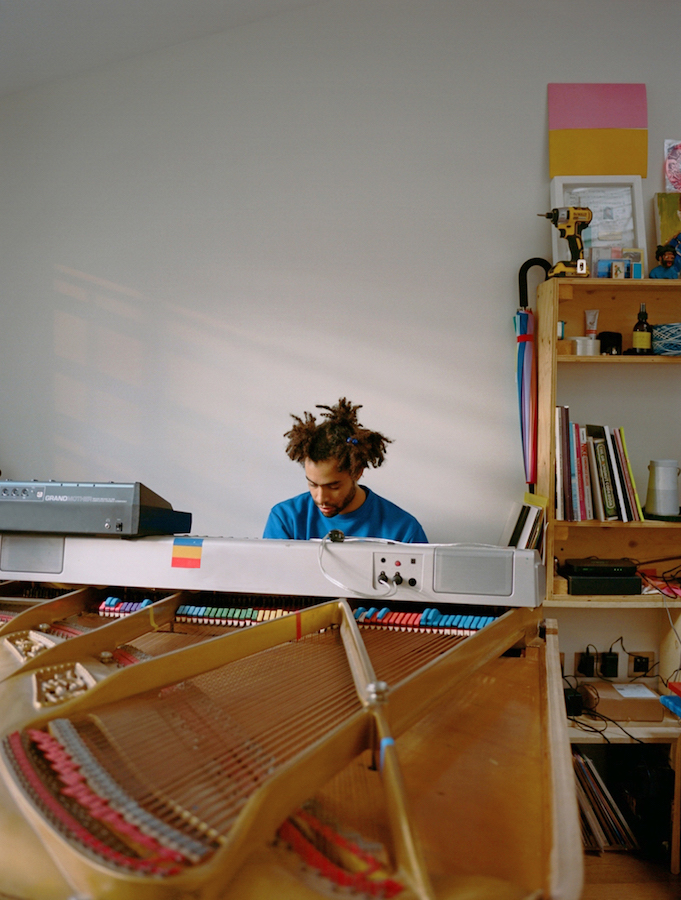 That go-between has also proved vital in establishing a new musical community between Timothy and the musicians in Freetown coalescing around his studio. “The studio is like an international residency slot to invite people out for a few months to work with others locally and to engage with the context,” he explains.

The first of these impromptu residencies came from longtime friend Rosie Lowe in January 2020. In the months preceding the global Covid-19 lockdowns, the pair developed their idea for an album built around a mutual affection for choral music and the narrative of a mother and child’s love. “Rosie was really comfortable out there and we’d have fun trying things like going into the hills to perform weird vocal experiments amongst these ancient trees,” he laughs. “It’s really raw recording in Freetown because the studio is on a busy street, it’s also so humid that the piano sounds crazy and there’s only electricity half the time. That’s what’s so great about it – it adds a different texture.”

For such a visceral recording experience, Son is a beautifully polished collection of tracks showcasing Timothy’s deft ear for melodic improvisations and Lowe’s crystalline voice. The pair are also hoping to build on the project with an upcoming hand-illustrated children’s book expanding on the album’s musical themes.

Despite having released six albums in nine years and multiple art projects, Timothy shows no sign of slowing down. He has recently completed a residency in Italy at the Mahler & LeWitt Studios, indulging his love of classical symphony to produce a selection of compositions that might form the foundations for a new project. He is also producing for other artists – that he cannot name yet – and is looking to create site-specific sound installations for the release of Son.

“Sound is such an affecting medium that I am always drawn to,” he says. “But I suppose all of my work is about creating a kind of story, since they are the most powerful thing that brings people together.”

Linkedin
RELATED ARTICLES
OTHER ARTICLES
A group of aid workers face prison for helping to save people fleeing their homes at sea. If they are charged, it will have a chilling effect on humanitarian efforts.
After building his reputation covering the US civil rights movement in the 1960s, the photographer went on to produce some of the most enduring images of the past century.
After a two-year hiatus and a new album, the Nigerian artist is riding high. Now, he wants to bring his alternative, genre-bending sound to the world.
Activists and campaigners are fighting back against new laws that would seriously undermine the ability to take industrial action, calling it an attack on fundamental workers' rights.
From snake handlers to mardi-gras revellers, Tom “TBow” Bowden’s photos provide a snapshot of the wonderful and weird people who make up America.
A new film from Berghaus traces the story of Adam Raja, who left behind a turbulent upbringing to discover the healing power of climbing.