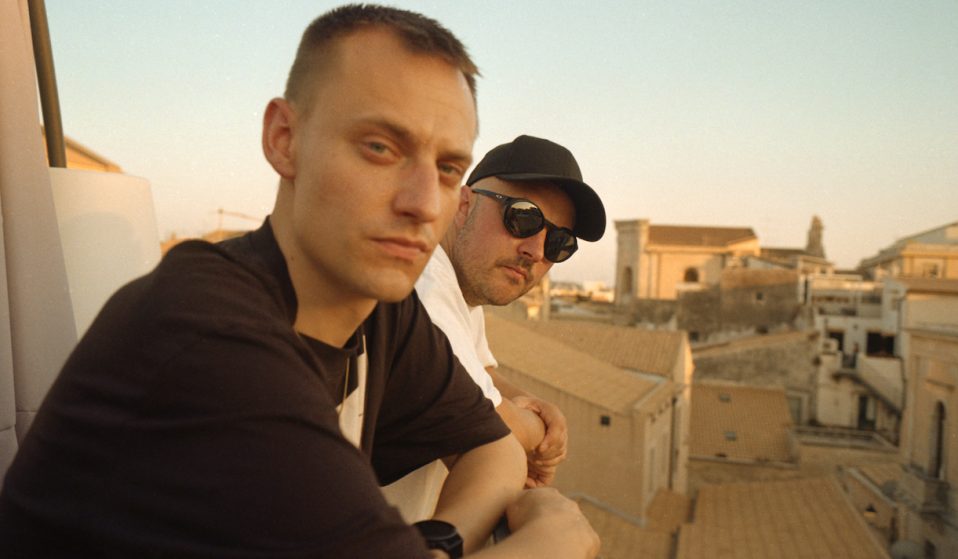 Brothers Tom and Ed Russell have produced some of the most distinctive dancefloor hits over recent years. They look back on how it all started.

Brothers Tom and Ed Russell have produced some of the most distinctive dancefloor hits over recent years. They look back on how it all started.

The main stage of the Ortigia Sound System Festival in Sicily is surrounded by the Maniace Castle. Through the years internationally renowned artists – including Giorgio Moroder, Virgil Abloh, Hot Chip, James Holden, Kamaal Williams – have taken to the stage there for the festival which runs over the last weekend in July. After parties, with John Talabot and Francesco Del Garda, took place in a beautiful garden on the outskirts of the city, where Fosbury Architecture built a DJ booth consisting of a kinetic box that transforms during the event. A cage of light progressively unveils the stage from sunrise onwards.

Brothers Tom and Ed Russell, aka Overmono, were on the bill for their first live set in Italy since the two started making music together, attracting a crowd of thousands for their Saturday night set atop the main stage. Formerly known as Truss and Tessela, the duo started collaborating in 2016, hiring a cottage in the middle of nowhere for a week of making music and of very little sleep.

The Overmono experience combines house, trance and techno sounds with high-pitched vocal samples. A few synths, a glitched vocal sample, and a 2-step drum machine made their track ‘So U Kno’ an instant dancefloor classic. Their latest release, the EP ‘Cash Romantic’ had a big impact in the UK electronic music realm.

Huck caught up with the brothers before their Ortigia set to find out how their collaboration started, how they escaped classical music as kids, and how two young boys from rural Wales got into electronic music.

You’re both from rural Wales so I wanted to start by asking how you got into electronic music? What was the spark?

Tom: My friend’s older brother. He started to get hold of some tapes, all sorts of UK hardcore stuff and I just kind of got into it from that. It wasn’t like I heard that and it was like, ‘Wow, this is amazing’. To begin with, it just didn’t really make much sense to me. I was only 10 years old and I’d been listening to heavy metal music. But over the course, like a year or two, it really started to permeate within me. And then I heard a distorted kick drum for the first time and I just thought it was the best thing ever. So I started with hard techno and I just went from there and took over. For both of us, there was an element of escaping. Our dad’s a classical musician, so classical music was a big part of our lives growing up. And I think discovering electronic music, especially really repetitive stuff, was perhaps a way of rebelling against classical music and our dad.

Ed: Exactly. Like trying to find the thing that’s the furthest away from that.

Tom: When I heard a 180 BPM distorted gabber kick drum I was like, ‘Yeah, I found it!’ [laughs]. Electronic music is one of those things that never left either of us, even though we’ve got quite a broad taste in music and stuff. We got turntables and bought records and then started to get into production. Loads of parties as well! We lived in a rural area, so we had to sort of make our own fun. And so we’d go and set up a sound system in a Woodland clearing or a disused quarry and that was cool. That had a big impact on us. We have to make up our own stuff. I don’t think either of us ever felt part of a scene like you might do if you’d grow up in a more populated area.

Ed: We’ve always felt like we can pull in from a few different influences because there’s not really like one scene in particular that we feel that we grew up with at all. There was no scene whatsoever.

Tom: We basically like whatever tapes that we could get hold of. It could be anything from hardcore jungle, but then also European trance and handbag house, hard house, whatever. Some of us preferred this or that, but as far as we were concerned, it was all just dance music. It was all electronic music and we loved it all. 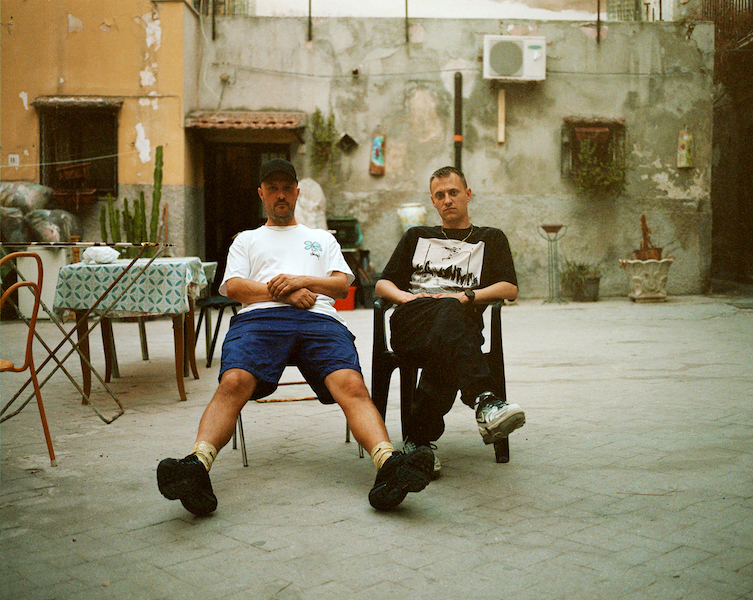 And did your dad end up enjoying the repetitive stuff you were playing as kids?

Ed: No, not at all! Only now he’s into it. He came to a gig of ours in Wales, near where he lives and that was the turning point for him. He was like, ‘Oh, okay, I get it now!’ It was really nice actually. I think it caught him off guard how much he enjoyed it. Since then he’s been fully on board, which is really nice because for years he just didn’t understand it at all.

Let’s talk collaboration. How did you guys end up making music together?

Tom: We’ve been asked this a few times and each time we’re asked it feels a bit weird to say, but, we never really thought about collaborating for years. We’re both into making music and we’re both really into pretty much the same music, or very similar music. But as much as we sort of played around with music together, or sent each other tracks all the time – and we’d have stupid things like who can make the biggest beat or who can make the best track in 20-minute competitions – we never really tried proper collaboration.

Tom: But then we went to this gig and Surgeon was playing under his own name, Anthony Child, with some visuals by his friend Ali Wade. And it was about an hour of the most sort of deep mind-cleansing music sound. I dunno, we both came away feeling like all the junk had been removed. And we were like, ‘Oh yeah, maybe neither of us are particularly fulfilled with what we’re doing solo. Why don’t we hire a cottage in the middle of nowhere and take some equipment with us and have a week of writing music.’ There were no preconceptions about starting a new project together or anything. And it ended up being an incredibly productive few days and we just got a mountain of music. We were just staying up an unhealthy amount of time without sleeping and just eating chicken wings. And, I don’t know, it was just a wicked few days of bright music. It was the first time in a long time either of us had done anything like that. It felt really liberating. That was basically how it started. Once we had a collection of music together, we both felt there was a thread there. There was a theme. It didn’t seem like a random collection of tracks. There was definitely a sound there. And then we thought, ‘Maybe we should actually think about taking this forward and see what happens’. 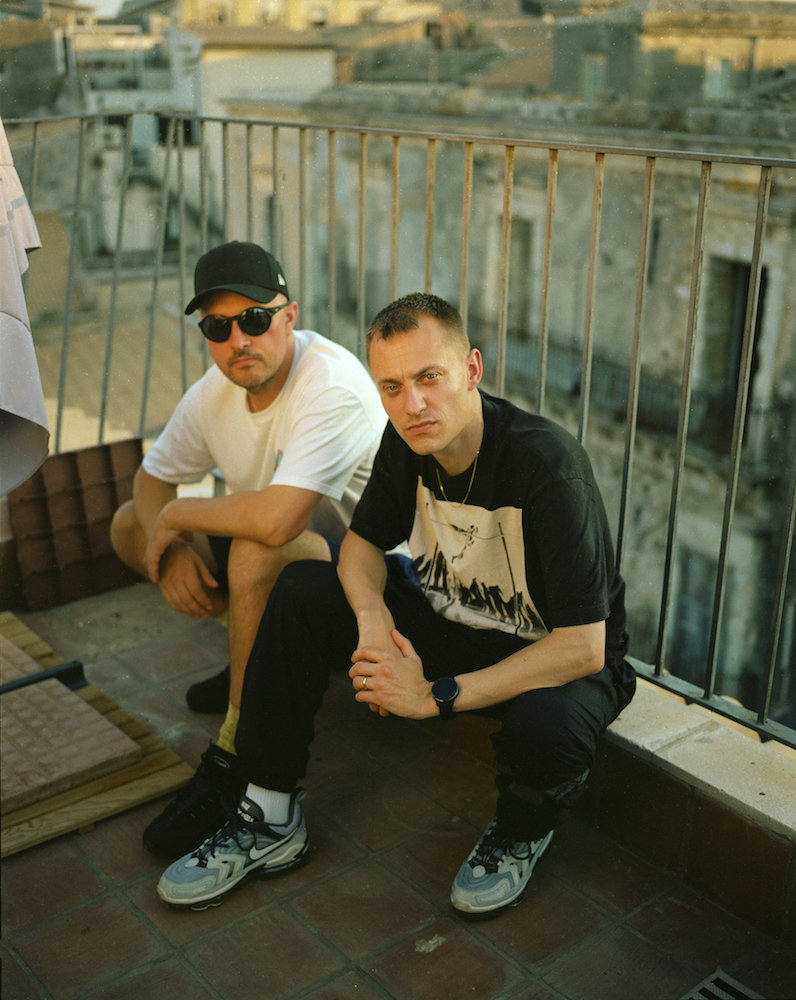 And the Overmono sound was born!

Ed: I remember being surprised at how cohesive it sounded. We had that batch of like 10 or 11 tracks from the first cottage session. And we’d never really discussed what we wanted it to sound like or anything. We were like, ‘Right, let’s just make some music’. There was something there that sounded quite different from anything either of us had done before, but it all had a really common thread throughout it.

When it comes to collaboration, how does it work for you?

Ed: I think it’s quite difficult to define it very clearly. We definitely have different approaches to making music and we can kind of lean on each other for certain things. So I’ll often lean on Tom for chord progressions or some synth parts and stuff like that. We definitely do things together that are only achievable when there are both of us together.

Tom: I think when we’re able to get in together for quite an intense writing session, like the one we had last week in Devon, we always just get so much done. And we might have a few ideas which we think are quite strong, but we’re not really sure what it’s gonna take to finish them for instance. But when we get in a room together, we figure it out pretty quickly. Like Ed said, we both have quite different approaches to making music, but we share a common goal of what we wanna achieve. But it’s just a different route to get in there. And so it’s always kind of fun to see what ideas the other ones have to try and achieve what we wanna achieve with the track.

I’ve been listening to a lot of new underground music coming from the UK, like speed garage and loads of UK bass, and many young artists are getting into it. Coming from the underground, what would advice would you give to a younger generation?

Ed: Don’t listen to the shit that people say online about how to make music, ’cos most of it it’s bollocks.

Tom: Yeah. Definitely. Don’t pay attention to people on production forums and social networks. Just be really confident in your own thing. Try to do stuff that you want to do for whatever reason that might be, and not because you think that your friends, your peers, or whoever your idols are, might like it. And I think if you stay true to what it is that you really like, you’re gonna get there. You’re gonna find something, you’re going to find the sound that no one else has.

Overmono are on tour across the UK, Europe and North America from 22 September – 5 November 2022. Full details or tickets, head to overmono.com.

Cash Romantic is available on most major streaming platforms.

Linkedin
OTHER ARTICLES
Swimmers and local residents are escalating their battle against the UK water industry with some refusing to pay their bills to Southern Water, reports Sam Haddad.
The idea that a younger generation is abandoning work has become a popular narrative online, but it doesn’t necessarily reflect reality.
Photographer David Corio’s archive offers a glimpse inside a revolutionary era of music and nightlife.
Brothers Tom and Ed Russell have produced some of the most distinctive dancefloor hits over recent years. They look back on how it all started.
Their drinking habits have seen them derided as ‘generation sensible’, but this overlooks the complex and nuanced reasons people are turning their back on alcohol.
Following the death of the monarch, a 12-day period of mourning began in Britain. Photographer Julian Zerressen was there to capture the surreal scenes unfolding in London.