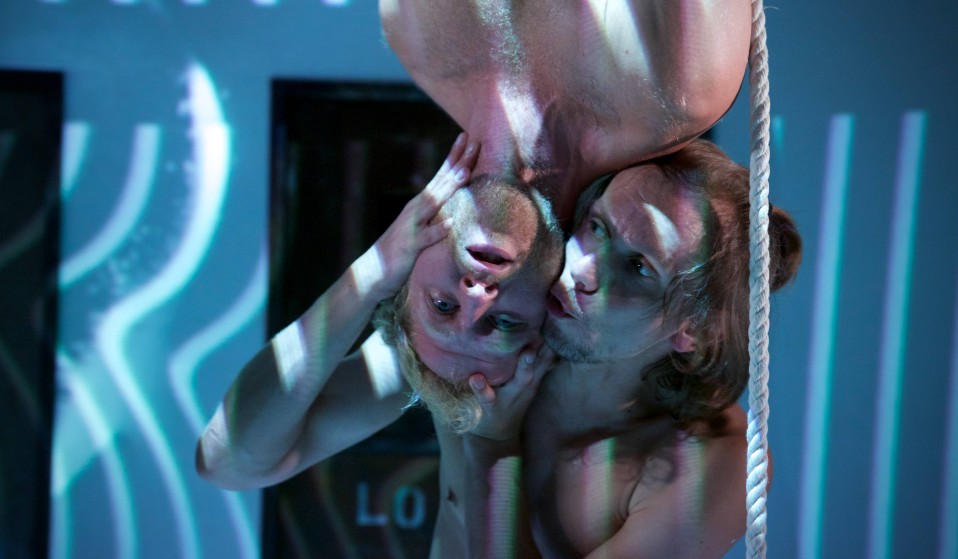 Vladimir Shcherban, Nikolai Khalezhin and Natalia Kaliada may be exiled from their home country of Belarus, but their theatre company is pushing boundaries at home and abroad.

Vladimir Shcherban, Nikolai Khalezhin and Natalia Kaliada may be exiled from their home country of Belarus, by the leaders of Europe's last dictatorship, but their underground networks in their home country and abroad have seen the Belarus Free Theatre company blossom, producing work that confronts society's most pressing concerns.

There is screaming and banging coming from the rehearsal stage of the New Diorama Theatre in North London. Belarus Free Theatre’s Associate Director, Vladimir Shcherban, quietly beckons me in. “They’re fighting against the system,” he grins.

Inside, four actors in white coats and matching scrub clogs are piled on top of a fifth.

The actors have been schooled in face-down restraint, a dangerous technique for immobilising a patient face-down. Deployed in psychiatric institutions, it was responsible for eight deaths in the UK in 2011 alone. For patients who have experienced sexual assault, it can also be all too reminiscent of the experience.

Between 2013 and 2016, despite calls to eliminate it, incidents of face-down restraint had grown by 16%. While the old method involved knocking a patient to the ground and tranquilising them, the new method is subtler. “It’s like contemporary politics,” an actor comments. “All very polite. It’s just that you can’t move.”

Staging the experiences of schizophrenic turned psychologist, Arnhild Lauveng, Tomorrow I was Always a Lion, which opens this week at London’s Arcola Theatre, takes audiences behind the closed doors of the psychiatric institution. Based on Lauveng’s book A Road Back from Schizophrenia, this piece explores the experience of illness, of the system, and of overcoming both. 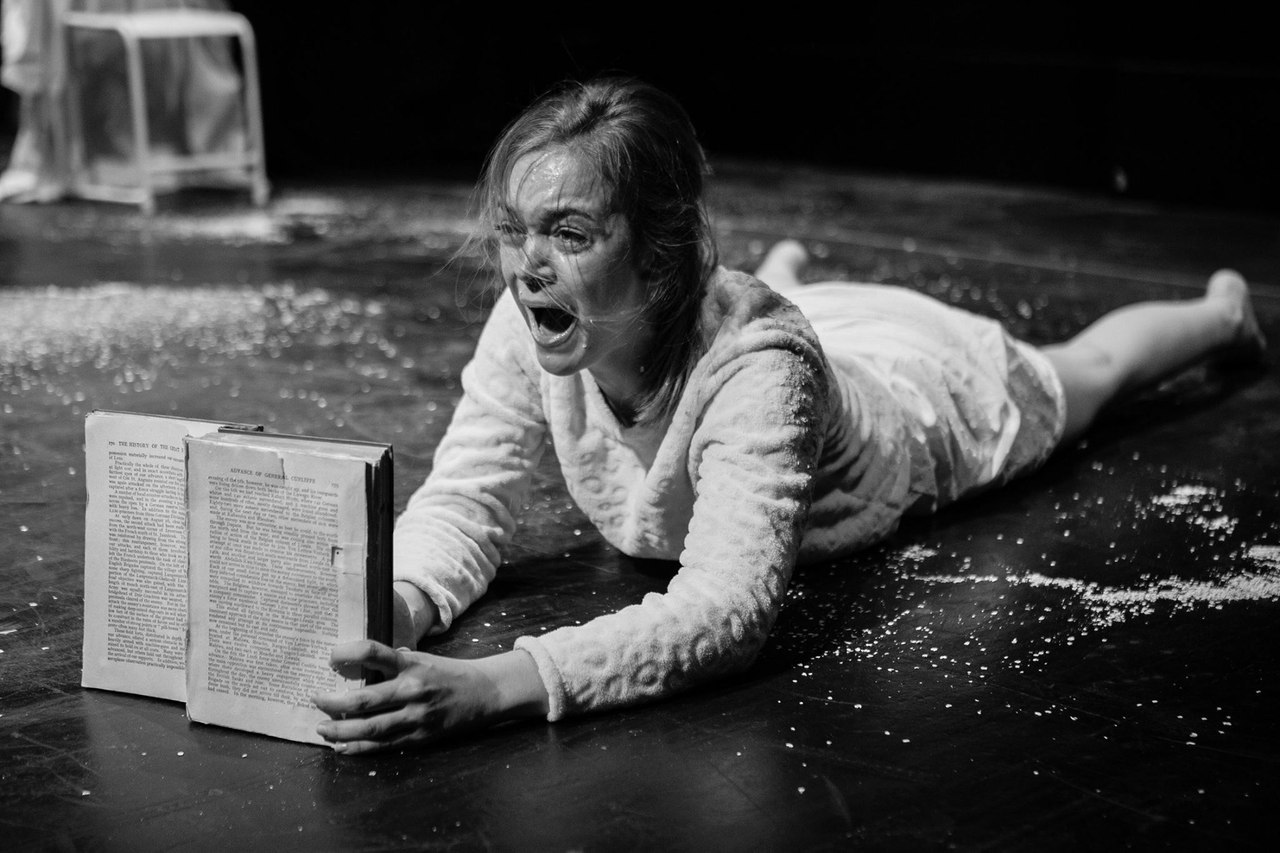 One in four people experiences an episode of mental illness in England every year. During our lifetimes, between one and three of us in every 100 will suffer from schizophrenia. What happens when a system breaks down and turns a person into a lifelong patient? These are taboos BFT are determined to challenge.

Five actors embody the voices that assault Lauveng, both inside the institution and within her own mind. “For our brains, there’s not much difference between reality and imagination: the imaginary can be just as painful,” Shcherban explains. 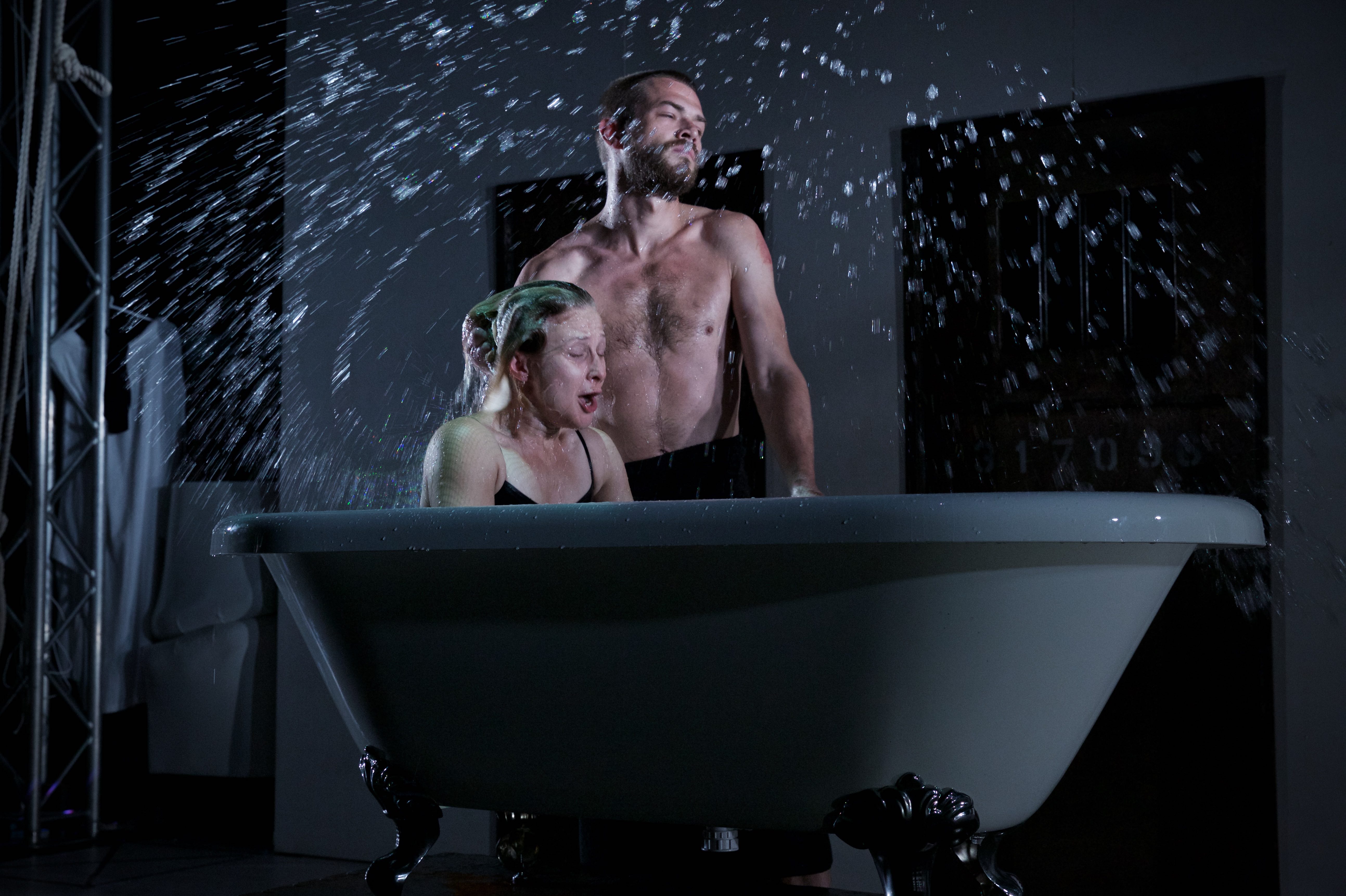 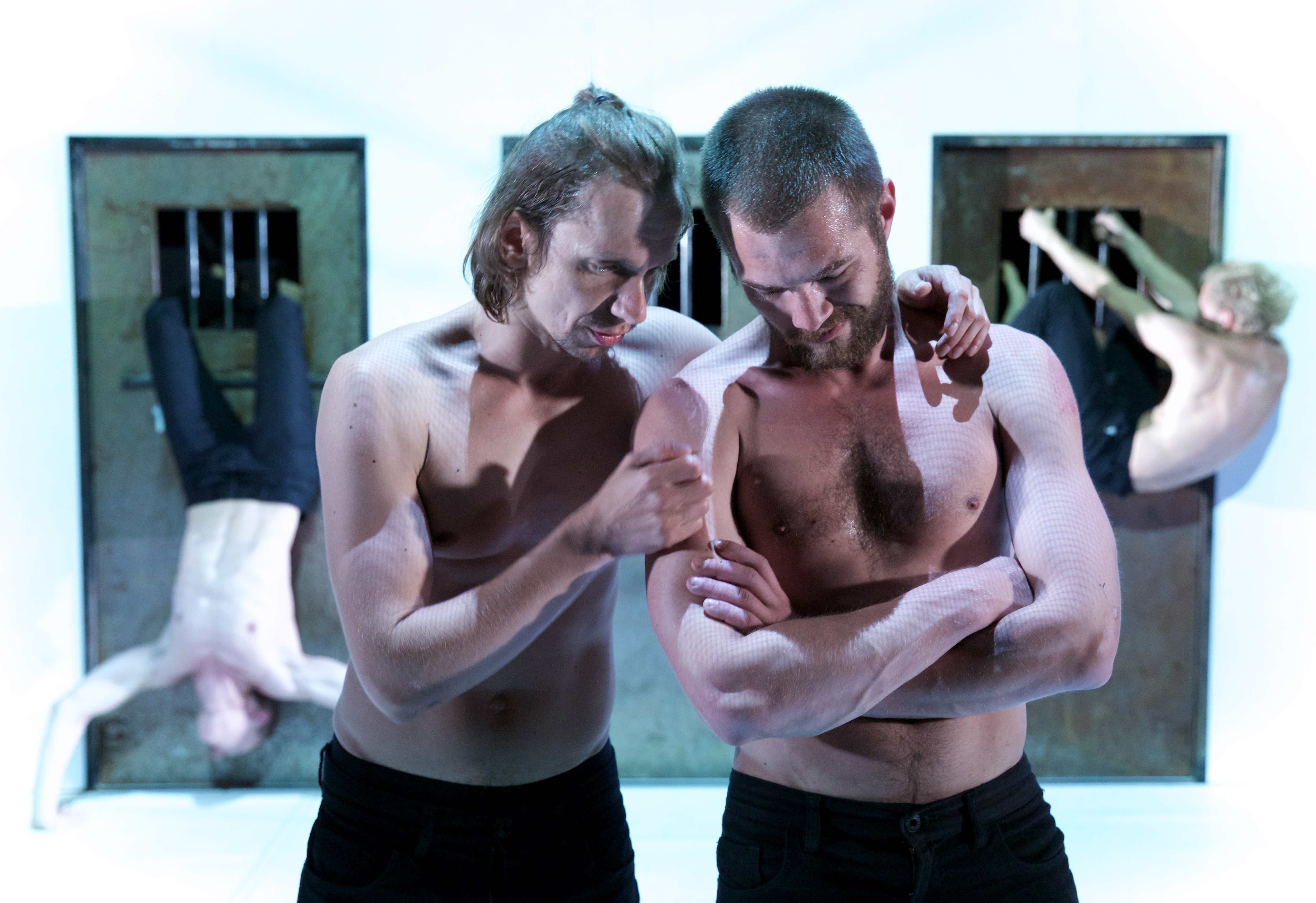 This is the first production with English actors by the Belarusian company, assembled in 2004. When a raft of former Soviet states joined the EU, Belarus remained as Europe’s last dictatorship. A group of friends – writers, journalists, doctors, and business people – gathered in an apartment in downtown Minsk to discuss how to make it ‘free’. Among them were Nikolai Khalezhin and Natalia Kaliada, now BFT’s artistic directors, both living in exile in London.

They hit on the idea of playwrights as “x-ray machines”, scanning their societies to reveal their inner workings, and borrowed their operation manual from the Soviet publishing movement Samizdat – dissident literature passed hand-to-hand between friends, and neatly summarised by Vladimir Bukovsky: “I write it myself, edit it myself, censor it myself, distribute it myself, and do the jail-time myself.”

Tight networks of friends and family introduced them to sympathetic actors and a young director at the state-run National Theatre of Belarus. Vladimir Shcherban was its hot young thing, winning awards for classical adaptations. “I didn’t come to the theatre from the barricades,” he says. “So when I started doing this stuff about gays and crazies, people got scared, because these are taboo topics. People stopped speaking to me. The artistic director of the National Theatre thought I’d gone mad.”

Shcherban was at work on 4.48 Psychosis, British dramatist Sarah Kane’s account of the knotted fabrics of mental and social disorder at the point of suicide. “That play described exactly what I was experiencing at that time – working in a system that didn’t fit with how I feel, how I think.” Prohibited by the Belarusian National Theatre, 4.48 became BFT’s first show. Shcherban was expelled from the National Theatre and joined BFT. “I lost my warm, comfortable place,” he says. But I gained creative freedom.”

In March 2005 Kaliada wrote two letters – to former dissident and Czech President, Vaclav Havel, and British playwright Tom Stoppard. Stoppard replied within 15 minutes. With their support, and royalties from Khalezhin’s plays, BFT held a press conference and made an announcement: They didn’t have a building, any money, or anything else, just an idea of using theatre to speak freely.

In the early days Kaliada and Khalezhin left flyers in university toilets. Performances took place in apartments, restaurants, co-ops, even forests. Later they used LiveJournal, Facebook and Twitter to build a community online. Audiences of 80 crammed into a friend’s house until, in 2013, the KGB threatened to demolish it unless they were evicted.

A new kind of theatre grew out of this forced destitution – stripped to its barest essentials. The aim was not to “do theatre”, but to “do life” and to confront audiences with taboos: refugees, the death penalty, climate change, imprisonment, madness, torture, and sex.

Their success outside Belarus – becoming regulars at New York’s Public Theater and London’s Young Vic, their London home since 2011 – made them more threatening in Belarus. Comments sections of online publications and Wikipedia were filled with disinformation by the KGB. Friends and fellow activists were killed. Raids spiralled out of control.

When widespread demonstrations broke out in Belarus against the falsification of elections that were violently put down in 2010, Kaliada was among those arrested. “When they realised they’d let me go, the KGB organised raids on the apartments of my parents and friends… My husband was taken into hiding. His friend and our younger daughter covered Nikolai and me under many blankets. Overnight on 31 December, we used three types of different transportation. We left Belarus at 00.20 in the new year of 2011.”

Two days later, when the KGB surrounded Minsk airport, they were already in New York for the Under the Radar Festival. They have not been back. In 2011, Shcherban joined them.

Although its directors were forced into exile, BFT is as above ground in Minsk as it’s possible for an underground operation to be. “If you want the regime to continue, by all means whisper,” Vaclav Havel advised them. “If you want things to change, you must speak out loud.” Performances, workshops and screenings are held daily in the same Minsk garage – all for free, as selling tickets is punishable by a six-year prison sentence. It’s risky, but they continue. 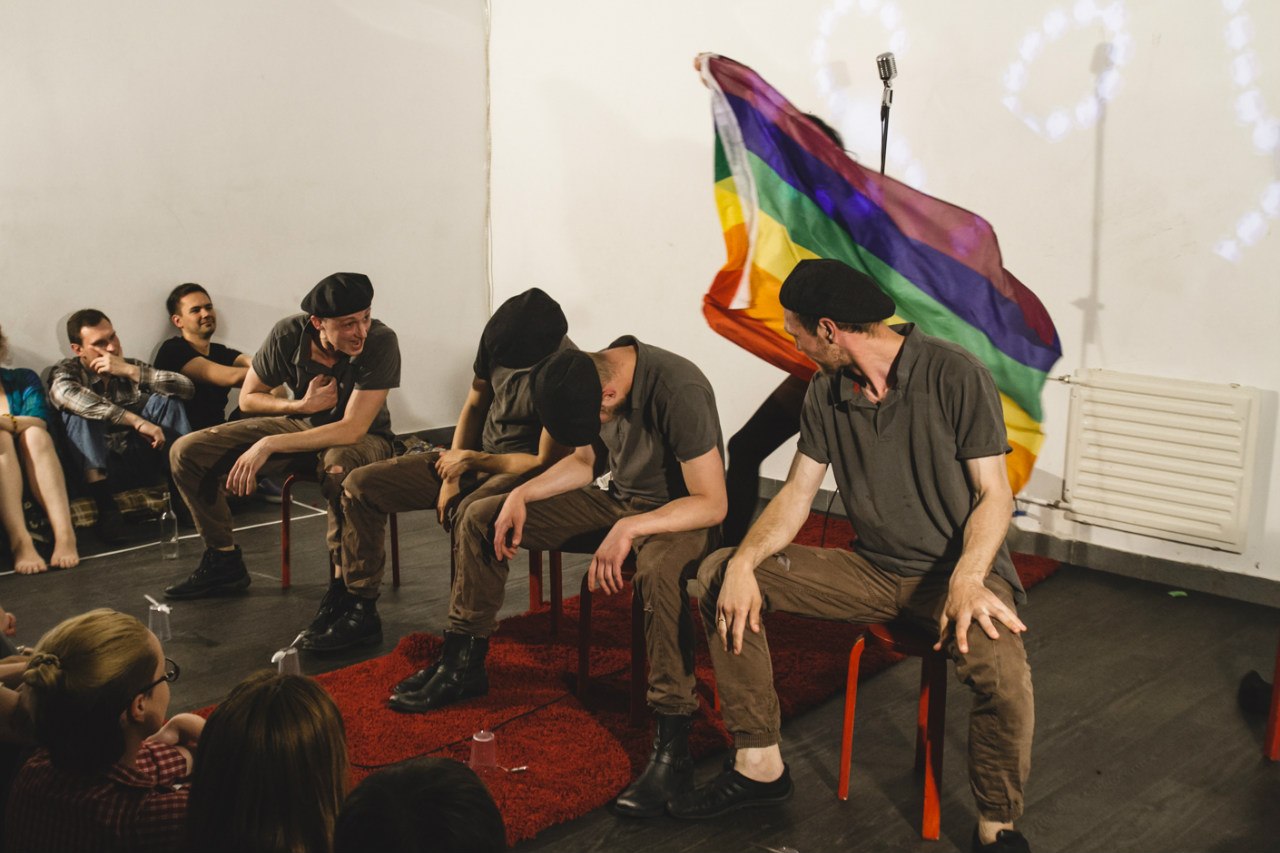 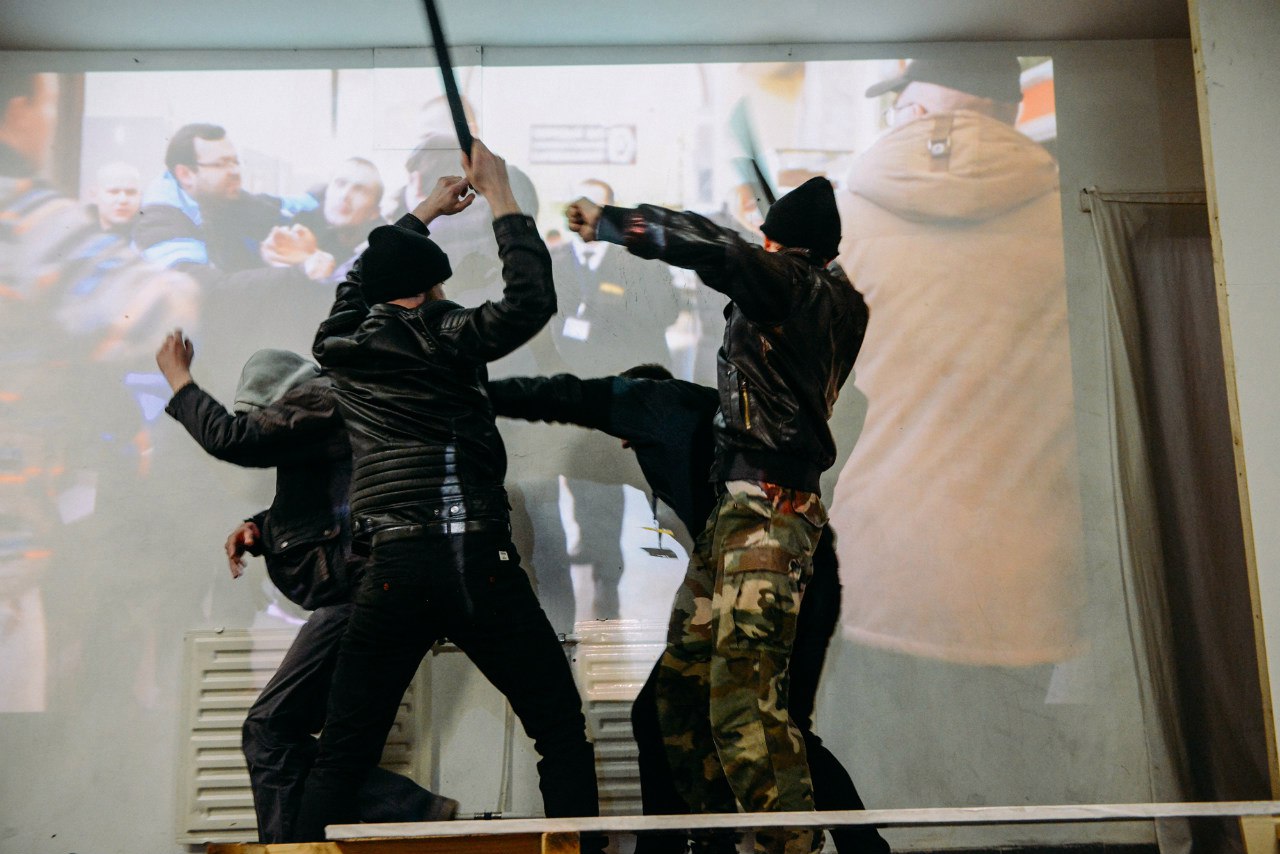 In Minsk, BFT’s ensemble of 15 actors and two managers – a young female couple, a massive provocation to the homophobic regime – raids and harassment have become routine. Audiences as well as actors are arrested. Yet within an hour of each show being announced, every ticket is taken. 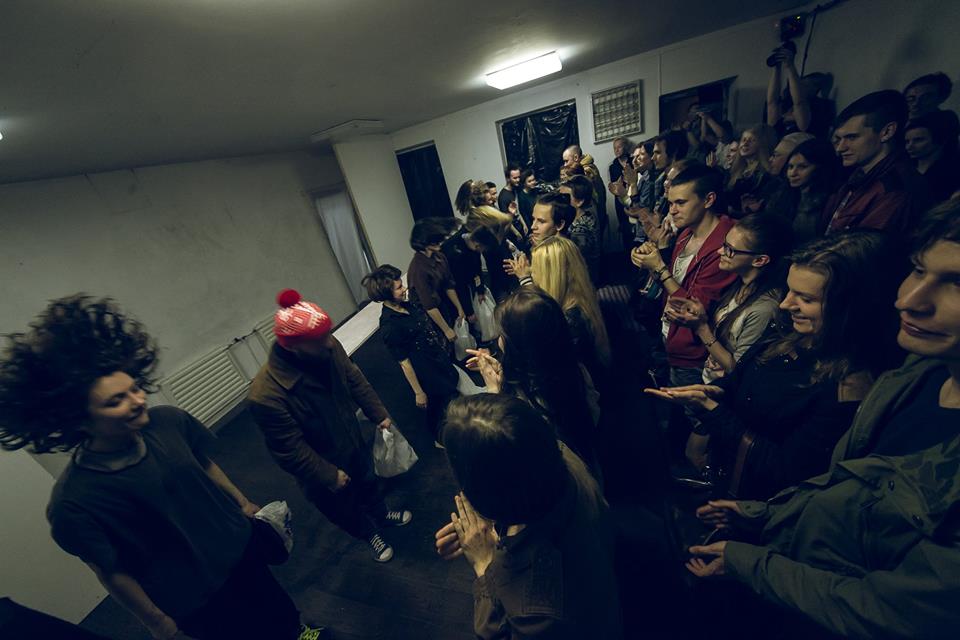 In the UK  too, their relentless examination of taboos and freedom provokes: Their 2014 show Red Forest, researched on four continents, connected climate change and war, and anticipated the refugee crisis. Though popular with audiences, it left critics cold. Their approach of tackling systems instead of ‘issues’ irritated the British theatre establishment, where censorship often operates as formal convention. “I know the death penalty is bad,” wrote one critic. “But not as bad as this. Fuck off back to Belarus.”

But telling people what they think they do not want to hear is important – what they are afraid of, where they are silent. A human being has an immense need to see articulated onstage what they’re unable to voice in their own lives, Shcherban believes: “For an ordinary person being pushed through a system, scared to say what they think, scared that they might not be ‘normal’, to hear a personal experience onstage – and it’s just an experience, but it resonates – that is a serious liberation.”

Linkedin
RELATED ARTICLES
OTHER ARTICLES
Financial turmoil is pushing people who work in the sex industry into more dangerous and desperate situations as a means of survival.
Ahead of the release of their first collaborative album, the producer and rapper talk psychedelics and the state of UK hip hop.
With skyrocketing rents, packed out viewings, bidding wars and more, renting in London has never been harder.
Following the announcement of an 80% hike in the energy price cap from 1st October, crowds gathered outside the offices of energy regulator Ofgem to protest and declare their intention to undertake a payment strike.
By turning a real-life crisis into daytime television fodder, TV bosses have once again shown themselves to be completely out of touch with audiences.
Rogue landlords are exploiting young and inexperienced renters and leaving them in mental and financial turmoil, reports Niall Hignett.