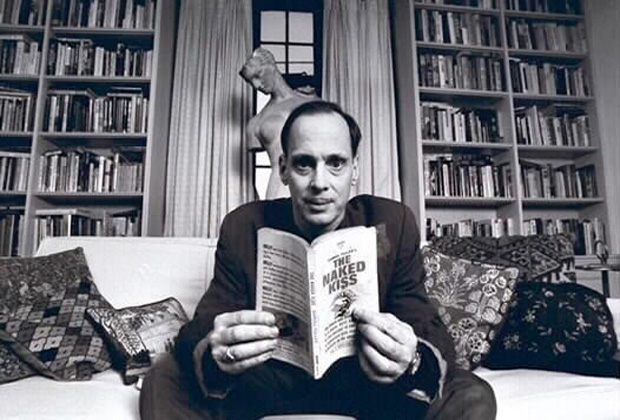 How to filth up your life.

How to filth up your life.

Cult filmmaker John Waters – who cut his teeth making exploitation films like Mondo Trasho and Pink Flamingos in the 60s and 70s and hit the bigtime with camp classics like Hairspray and Cry-Baby in the 80s and 90s – recently visited London to promote his new book Carsick, a series of stories from hitchhiking across America.

Here are some things we learnt from the most charismatic man to ever discuss a high-brow charity gala for genital warts.

Apparently suffering from something of a mid-life crisis Waters embarked on a hitchhiking adventure two years ago that seemed to renew his faith and interest in the human race. He got picked up by ‘wheeler-dealer potheads’, truckers, parents and tons of other characters. One Republican kid even drove four hours out of his way to drop him at his destination and then drove back at a later date and joined him for a bit longer on his travels. All kinds of adventures happen, Waters suggests, when you hit the road with no agenda and no direction home. 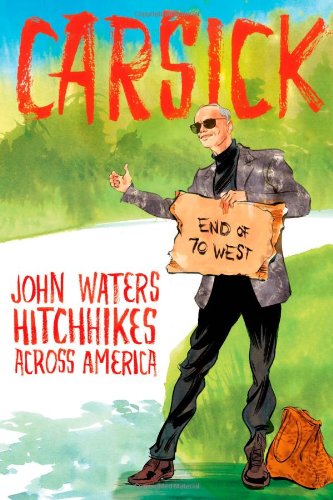 “If you go home with somebody and they don’t have books, don’t fuck ’em!” Waters is pretty famous for this line he drops at talks and interviews sometimes. In fact, the sixty-eight-year-old is a compulsive reader who starts everyday with a stack of newspapers and devours all kinds of reading material with a rampant curiosity. A lot of his work is inspired by things he reads as truth, he says, is often stranger than fiction. Just google (NSFW) feeders, gainers, bears, cubs and blossoms if you need proof. But do so at your own risk, says Waters, because you might get arrested next time you go to fix your computer. 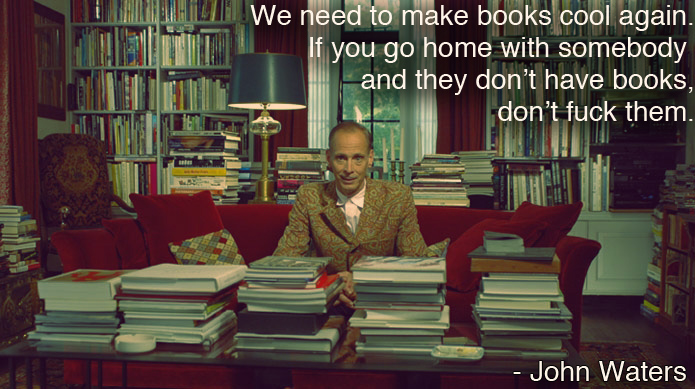 If there’s one thing John Waters is, it’s open-minded. Every shocking scene and ‘bad taste’ joke he puts out into the world goes some way to de-stigmatising some position, ridiculing some taboo. Or as he told Russh magazine: “I think if anything Mind Your Own Business is my message. Don’t judge other people until you know the whole story.” Apart from grown men who dress as babies, he told us on Tuesday, because that’s just fucked up.

Does that sound wrong? Spend too long with the ‘prince of puke’ and you start to see an innuendo in everything but, sort of innocently, this one is all about keeping non-sexually playful in the marketplace. One game, Waters tells us, is ‘Shopping For Others’ – where you put something funny in someone else’s basket (basket is Waters’ favourite word for balls, fyi) and watch their reaction at the checkout. All kinds of hilarity obviously ensues (see his 1998 art world satire Pecker). Waters himself got played recently when someone Tampax bombed him, lol. Another game is ‘Dropping’ where you go and buy some really rank ‘meatball-coloured maxi skirt’ from a charity shop and hang it up in the Hermés shop. Too good.

Hahhahaha. Sorry, this should probably be labelled ‘have a sense of humour’ but ‘turd terrorism’ is so great. I feel like every great dinner party ends with a story about a poo turning up somewhere it shouldn’t. Anyway, in Tuesday’s talk Waters suggested leaving an upper decker (Urban Dictionary: The act of defecating in the upper tank of the toilet) in the loo of some film company that tried to censor him. The genius, he says, is that no one knows where the smell is coming from. The genius, I feel, is getting the poo up there. Either way, make funny of bad things that happen to you, Waters is saying, and life will probably be a whole lot better. 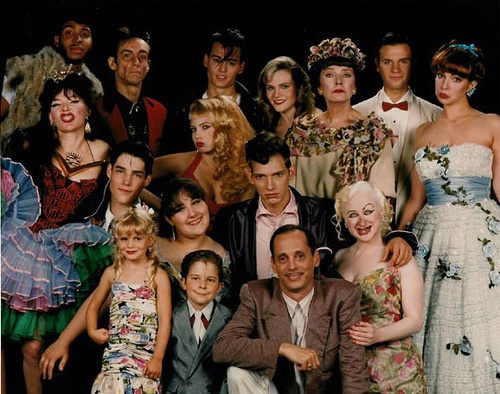 Linkedin
RELATED ARTICLES
OTHER ARTICLES
As Slint re-release their 1991 masterpiece Spiderland, Huck drops our interview with Lance Bangs, director of The Breadcrumb Trail - the story behind the enigmatic band and the making of their fabled album.
HUCK speaks to the legendary director about films and skateboarding, and shows why he prefers the doing instead of the talking.
HUCK travels to West Chester, Pennsylvania, to get up-close and personal with Bam Margera, skating’s most recognisable star.