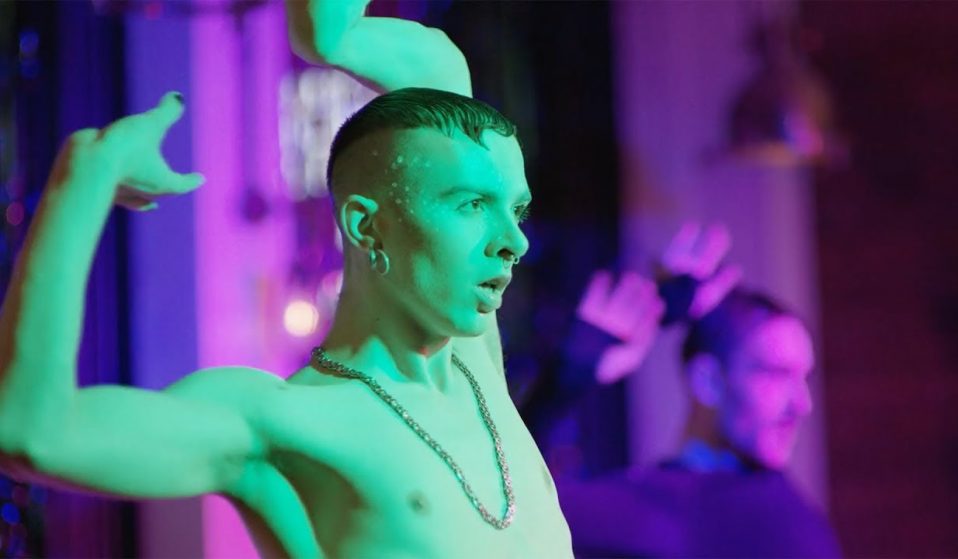 Vogue was synonymous with the gay clubs of ’80s New York, but it’s now in the midst of an unlikely renaissance in the North of England. A new documentary explores why.

Vogue was synonymous with the gay clubs of ’80s New York, but it’s now in the midst of an unlikely renaissance in the North of England. A new documentary explores why.

Under a spotlight at Manchester’s Gorilla nightclub, performers are pulling shapes on a catwalk. Fake eyelashes, spandex, sequins, lipstick, face paint and platform heels shimmer as dancers gyrate, strut and vogue, whilst a glittery MC shouts out “every single one of us can be more than people see on the outside.” Over 3,000 miles away from where it originated in New York, the vogue ball finds a new home in 2019 in the north of England.

In the midst of the dancefloor, two filmmakers discover themselves agreeing to create a documentary about the dazzling event and the Mancunian vogue performers making a home at the ball decades after it caught alight in America. Five years later and Deep in Vogue traces the history of vogue from New York to the cathedral grounds in Liverpool where a 16-year-old Darren Suarez walked his first “catwalk”. Directors Dennis Keighron-Foster and Amy Watson – who describe the ball as “a birthday party where it is everyone’s birthday” – drop into rehearsals, meet the diverse dance troupes known as “Houses” and hear how the scene has been transformative for those living on the margins of society.

Although it is all empowerment, sass and confidence on the catwalk, it is the oppression these communities experience on a daily basis that fires the vogue ball, serving as both a safe space and creative form of expression. Mother of House of Ghetto Darren Pritchard puts it best when he says: “the vogue ball is just where gay, straight, male, female, black, white, old, young come together and just go ‘you know what, fuck it, let’s celebrate and dance.’”

From their base in Manchester, Dennis Keighron-Foster and Amy Watson speak to Huck about what a world would look like if the vogue ball was mainstream, and “queer culture” was just known as “culture”.

How would you describe the vogue ball to someone who hasn’t been?
Amy: I think the thing that really gets you is that it makes you OK with whoever you are. You see a little slither of that up on stage, and that resonates with you in the audience. Nothing else you see really does that or allows you to see every degree of fabulosity represented and reflected back to you in a positive way.

Dennis: Seeing people being themselves, strutting their stuff in a way that they want to and celebrating themselves is just really infectious. It makes you go away from the vogue ball and think, ‘I want to bring this into my life.’

The vogue ball features a lot of dance but it feels very different to a standard dance performance – why do you think that is?
Amy: A lot of the people dancing have a background in dance so you’re getting that level of accomplishment, but the story being told is the dancers’ own. Vogue is about dancing who you are, so to bring that to a professional level of dancing is just incredible to see. If you were to let any dancer freestyle or dance how they wanted it would be amazing because they would not be dancing anybody else’s vision but their own.

Dennis: The catwalk element as well allows people to show off not just dancing but the fashion side of things because vogue comes from the magazines and emulating that idea that I can be anything I want to be.

The ball has obviously been around for decades – is the fact that it’s still necessary today a bit depressing?
Amy: It is depressing, but great art comes out of times of great strife and oppression. Things are getting worse though. When we were looking into this film we were researching and looking at the stonewall statistics and were just so shocked. Post Brexit I think there has been this push out to the margins and a rising tide of homophobia. There was a homophobic hate crime on my road last week.

Dennis: Yeah, two of my male friends have been beaten up recently.

Amy: The question we asked ourselves when we made this film was why is the vogue ball back in 2019? Why has it come back from the 1980s, and why do we need it now? When we made the film, when we looked at the news headlines and the statistics, when we spoke to our friends and when we asked the voguers and the dancers what was going on, we realised there was this huge push from the right to be intolerant.

Dennis: And also running parallel to that there’s the commercialisation of queer spaces. So, Manchester is sort of famous for its queer spaces, but they are becoming very commercialised and demand that you fit in a certain box – like a macho box for example. There’s no place for truly queer artists and people who just want to be themselves.

Amy: I think Darren Suarez, Mother of the House of Suarez, says it best when he says: ‘I don’t want it to be Queer culture, I want it to be culture.’ We shouldn’t need these specific spaces, they should be everywhere, and it should be part of our culture. Unfortunately, the fact of the matter is that there is this big swing to the right and that’s the post-Brexit populist kind of a world we are in now.

What would society look like if we didn’t need vogue balls?
Amy: I think the vogue ball should move into schools! They shouldn’t be this thing that goes on in the city that no one has ever heard about.

Dennis: It’ll be different groups of people that will need it. I think that’s what we are finding now – originally it was a black and Latino gay male thing, but now there are women and white people doing it. The vogue ball is for anybody who feels marginalised in their lives for any reason.

This doc focuses on the voguing scene in the north of England – is there a big divide between the two parts of the country? How does it manifest differently?
Amy: They take very different hues. I think in London the scene very much takes its cues from Paris and New York – they continue the houses, they continue the names from the original voguers from New York and Paris. It’s a lot closer to the original inception of what vogue was and what it was for.

Dennis: Whereas up north – even though Darren Suarez and Darren Pritchard were original voguers – they are doing this different thing which is more of a celebration of vogue. They are quite honest about that because the vogue community can be quite ruthless. This northern version of vogue is quite accepting, quite tolerant, quite open, but it is not liked by all the rest of the community, so they are very clear that it is a celebration of vogue.

You address issues of cultural appropriation in the film, did you feel it was vital to discuss this?
Amy: It is something we have had to be really careful and sensitive to navigate. We never really thought to argue one way or the other but to show how people in the north felt about that argument. I think the doc shows that there is a stance of acknowledging that the scene is inspired by people who have had different experiences, but it is needed here as much as it was needed in New York in the 1980s. There are similar crushing pressures from a racist, homophobic society that might be subtler than it was in the 1980s, but those prejudices still exist. There might be different prejudices too – black women are the hardest hit by austerity in the UK, for example.

What are your hopes for the documentary? Do you hope lots of young people will see it?
Dennis: Totally. Local Prides are so expensive now, so young queer kids can’t access them. If just one person sees this empowering doc and it resonates with them or they hear Grace Oni Smith’s (Mother of House of Decay) message of “you’re not the only one love”, then we have done our job.

Amy: Grace grew up in rural Cumbria and was getting beaten up every day for wearing a girl’s school uniform – if there had been something on YouTube that showed that a few miles away people like her were being celebrated for everything she was being bullied for it would have made all the difference. So, we just want people to see it in the hopes that it reaches the people that it resonates with.

Deep in Vogue is screening at Sheffield Doc/Fest.

Linkedin
RELATED ARTICLES
OTHER ARTICLES
As the Scottish government announces a rent freeze, an activist with Living Rent who fought and won shares how they did it, and what must come next.
Ahead of the release of their first collaborative album, the producer and rapper talk psychedelics and the state of UK hip hop.
In his 2008 series, the photographer pictured himself as Angela Davis, Martin Luther King Jr., Malcolm X, and other prominent figures.
Yesterday thousands gathered outside Buckingham Palace after news of the Queen’s death broke.
The two-day long event returned to London this year, showcasing a spectacular parade, steel bands and Caribbean food.
Financial turmoil is pushing people who work in the sex industry into more dangerous and desperate situations as a means of survival.