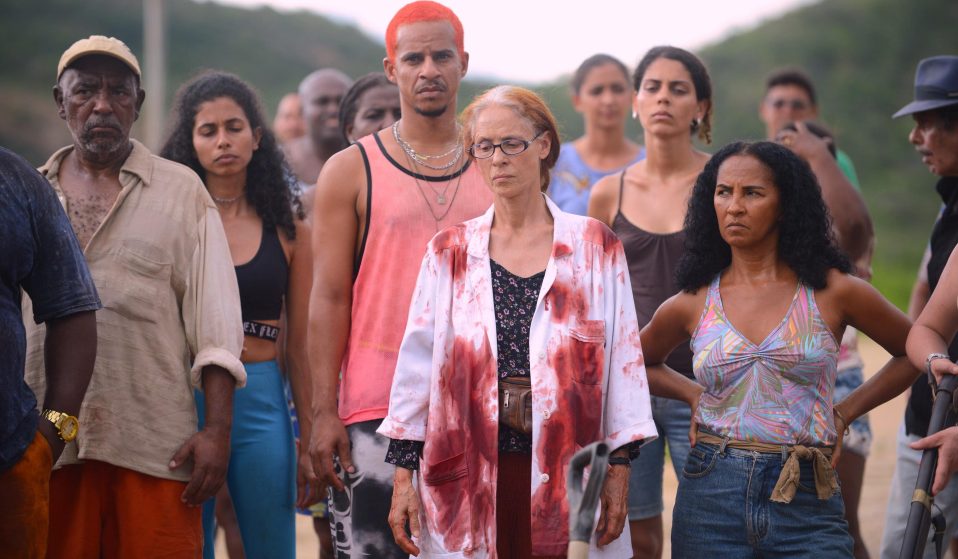 Part-Western and part-thriller, Bacurau tells the story of a small town plagued by strange happenings.

Part-Western and part-thriller, Bacurau tells the story of a small town plagued by strange happenings.

Bacurau is the latest feature from Brazilian director, Kleber Mendonça Filho. Co-directed by Julianao Dornelles, his long term producing partner, the film picked up the coveted Jury Prize at Cannes in 2019, and won widespread admiration from audiences in Brazil when it was released there last summer.

Part-Western and part-thriller, Bacurau is set “a few years from now” in a fictionalised interpretation of Brazil’s outback (the sertão). The action centres around a small village where, following the death of a local matriarch, strange things start to happen.

Ahead of Bacurau’s UK release last Friday, Huck met the directors in London as they neared the end of a busy press tour.

What were the initial conversations that led to Bacarau?
J: We first started to talk about making Bacurau in 2009; we always wanted to make genre films. We wrote a first version of a story, but that mutated a lot because we were always observing the world and our country – Brazil has changed a lot since 2009. We come from a region that suffers a lot of prejudice, so we started like that: let’s make a film about a group that fit in that place of ‘simple people’ but they’re not simple at all – there’s no such thing as ‘simple people’, we don’t believe in that.

You mentioned the changes in Brazil. How would you describe the contrast between Brazil in 2009 and today?
J: I miss that time a lot. Everybody was so happy to be there; we had this idea of a wonderful future, but things start to fall apart. The problems are becoming more serious year on year. In the beginning of Bacurau, the villains were filmmakers and anthropologists, and now the villains are going to a village to kill people. So, it’s escalating together with the reality I think.

K: Everything fell apart politically in Brazil because of a power grab. Lula’s eight years in power were successful, from any way that you look at it. It doesn’t mean he fixed Brazil, because Brazil’s problems have been the result of 500 years of colonisation and the way society has been set up politically and geographically. It’s a very complex society, like all societies are. But Lula’s two terms made the opposition mad, and incredibly jealous.

Power is a prominent theme in your work. As filmmakers, how important is a political message for you?
K: We never think in terms of message, we think in terms of interesting conflicts. In Aquarius, a woman is living her life and somebody knocks on the door and says ‘we have a great offer, we want to buy your flat’ and she says ‘thank you very much but I’m not interested’. That’s a very simple conflict, then it turns out that it’s political because it’s a woman saying no to a man and it involves money and power.

With Bacurau, it’s a classic situation you see in many Westerns. But when you do it in Brazil, there’s so much going on geographically, politically, socially and racially that it becomes political. But we never really elected red button issues. It was never about that. 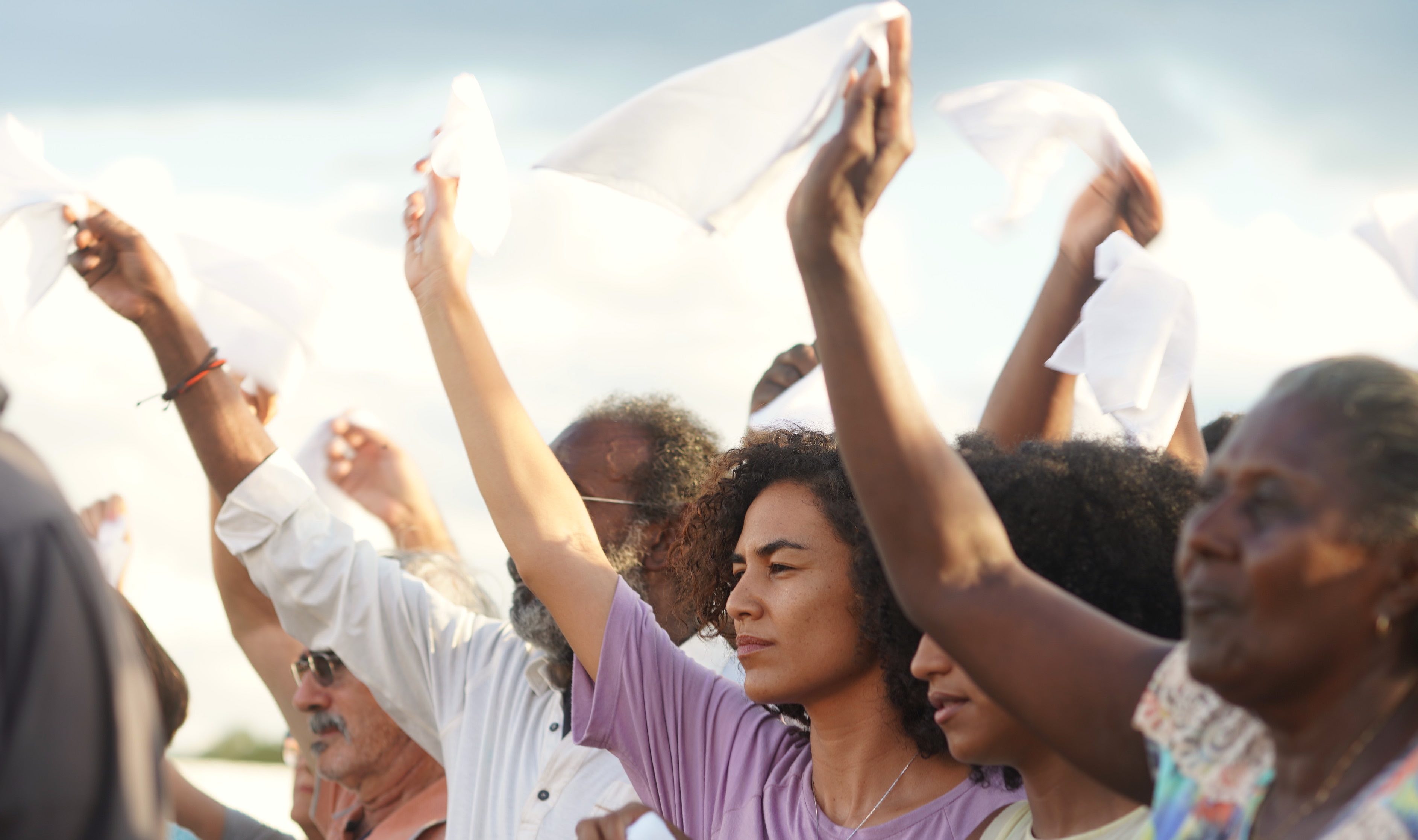 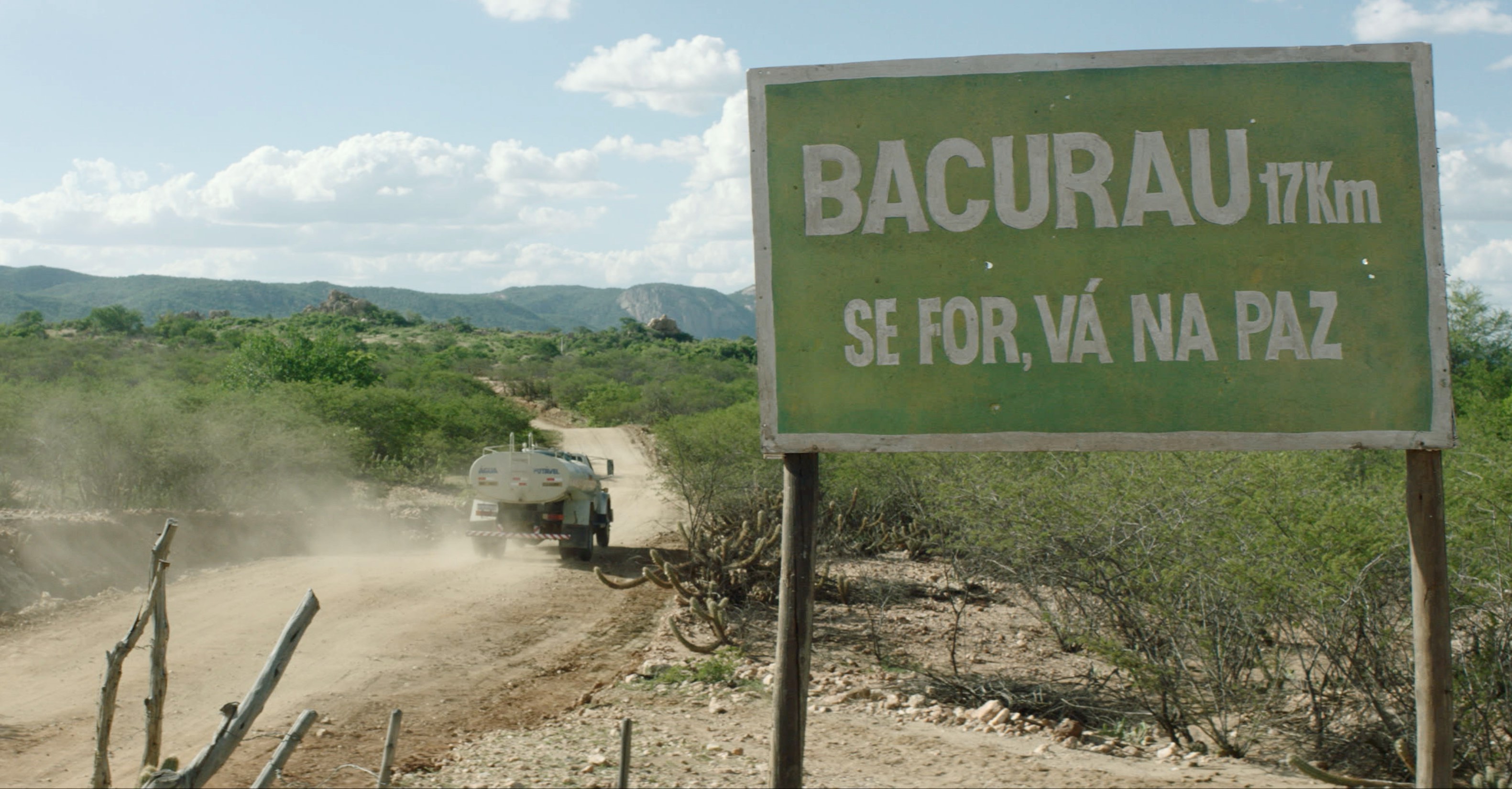 The film ends with a note about the number of jobs it created, both indirectly and more directly in terms of casting. How did people react when you initially approached them and explained the project?
K: The way normally it happens when you bring a film into a little town; some with suspicion, others excitement, but ultimately it was a very happy experience. I was afraid of what sometimes happens, this predatory behaviour from an urban group of technicians, but it was not like this. We talked a lot with the crew. Ultimately, we were interested in them [the locals]; we wanted their ideas. And mixing the non-professionals – creating on the fly roles for them – just doing this huge shoot of people, it was a beautiful experience.

I was reading some of the YouTube comments under the trailer, and several reference subtitles alluding to Parasite’s Oscar win and the subsequent conversations about non-English language films. How conscious are you, or relevant do you think these conversations are, within your own practice?
K: We become conscious because films are automatically put into boxes. If somebody makes a Marvel movie, it will always be a Marvel movie. To make Bacurau, it will always be a foreign language movie or a Western. People always find ways to simplify; it might be just a useful way to describe a film, or it brings your own culture and patronises that film. The success of Parasite is very interesting, because it made a lot of people who don’t normally watch subtitled films, watch subtitled films. Hopefully, that will be an education.

I was asked twice in the United States what is it like to make foreign language movies, which for me, is a bizarre question. It says a lot about the industry, and how the industry wants you to react. So, I was more impressed by how violent people think Bacurau is. I don’t think it’s any more violent than a lot of the other films which seem to have the right to be violent, because the industry has established that standard. Again, because of how the market and the industry has established the roles that each of us have to play as filmmakers and producers.

Bacurau is out now, and able to stream on Mubi from March 19.

Linkedin
RELATED ARTICLES
OTHER ARTICLES
Photographer Sean Maung reflects on documenting a small town in Pennsylvania afflicted by high levels of unemployment, poverty, violence, crime, and addiction.
Zsófia Sivák’s ongoing project documents the country’s tavern culture, preserving a once defining part of rural life.
Taking us through one of the most dynamic years in recent history, Laylah Amatullah Barrayn new photo book contains tender yet confrontational portraits.
Activists and campaigners are fighting back against new laws that would seriously undermine the ability to take industrial action, calling it an attack on fundamental workers' rights.
The pro skateboarder withdrew from the 2020 Olympic Games so he could come out as trans. Now, he’s hoping to encourage others to live as their authentic selves – within the sport and beyond.
A group of aid workers face prison for helping to save people fleeing their homes at sea. If they are charged, it will have a chilling effect on humanitarian efforts.