Art & Culture / Film / ‘Are women too emotional to hold positions of leadership?’ 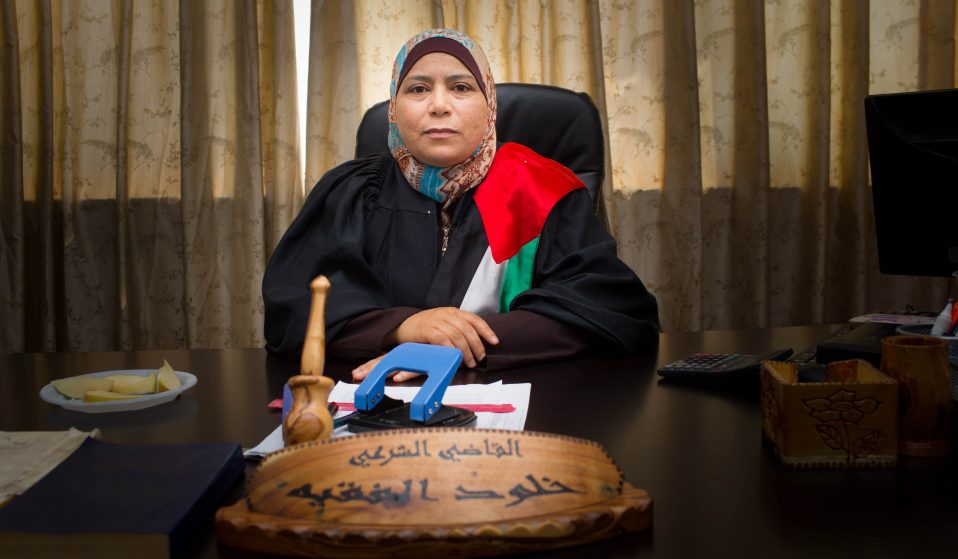 In 2009, Kholoud Al-Faqih became the first female judge to be appointed to the Shari’a courts in Palestine’s West Bank. A new documentary shares her incredible story.

In 2009, Kholoud Al-Faqih became the first female judge to be appointed to the Shari’a courts in Palestine’s West Bank. A new documentary shares her incredible story.

In 2009, Kholoud Al-Faqih was the first female judge to be appointed to the Shari’a courts in the West Bank in Palestine. Although women had worked as judges in the civil courts since the 1970s, the religious courts had been closed off to the female of the sex – and not just in Palestine, but across the Middle East. So when filmmaker Erika Cohn received an invitation to film in Judge Kholoud’s courts she jumped at the chance. The final documentary, fittingly entitled The Judge, follows Al-Faqih in her everyday life as she applies Shari’a law, educates her neighbours on their rights, looks after her children and works to improve the legal system for Palestinian women.

Cohn first met Al-Faqih in 2012 at a Shari’a law reform meeting in Ramallah, and was immediately struck by her presence. “I wanted to know more,” recalls Cohn. “Who was this woman? What was her story?” Her story is certainly a unique one, and one that began with a desire to help other women after spending many years working with battered wives as an attorney in both the criminal and Shari’a courts. As the film opens, Al-Faqih comments on her desire to become a judge: “Women need to be involved. That was the origin of the idea, that I should throw a rock to stir these stagnant waters.”

The Judge celebrates Al-Faqih’s achievements, whilst acknowledging the many obstacles ahead, especially in a society where many women question their own ability to hold such a position. The other judges also perceive her as a troublemaker, but Al-Faqih is fully aware that in order to make any progress, she must find equality herself. “My opinion is that if I don’t achieve justice for myself, I won’t achieve it for the people.”

Huck spoke to director Erika Cohn from her home in LA about Al-Faqih’s journey and the inspirational messages women from all over the world can take from The Judge.

What was it about Judge Kholoud’s story that made you want to shoot a feature film about her?
I met Kholoud at the Palestinian Authority headquarters in Ramallah. A dear friend and colleague had recommended that I see her, and it was a meeting where issues like raising the marriage age, domestic violence, polygamy, divorce, inheritance, custody and essentially every aspect of family life in Palestine. Kholoud had this unbelievable presence that really radiated throughout the room and as she spoke; I knew there was something incredibly special about her. When I met her, she told me she was the first woman judge to be appointed to any of the religious courts in the Middle East, and my jaw literally dropped. I told her I was a filmmaker, and she said: ‘Why don’t you come to my courtroom?’ And the moment that I walked into her courtroom and watched her adjudicate as part judge, part lawyer, part marital therapist, part counsellor, I knew it had to be a film.

Was it easy to convince Judge Kholoud to be involved?
I told her that her experience could provide a more nuanced understanding of Shari’a law for western audiences. I thought it could challenge stereotypes about Muslim women and radically increasing global Islamophobia.  Kholoud is always thinking, and she’s always a billion steps ahead of everyone else. She had been looking for ways to reach women and girls around the world to encourage them to pursue leadership roles in their communities despite whatever cultural norms and traditions might exist. She is a highly sought-after speaker, she gets flown around the world to meet with different women’s groups and Muslim groups to talk about women’s rights according to the Shari’a. This film offered her the opportunity for her to have that message displayed, without her having travel.

Can you explain Shari’a law to me a little?
Shari’a is religious law according to Islam that literally means “the path” or “the way.” Post colonisation, Shari’a law was reserved for family issues. So, in the majority of countries in the Middle East and in the Muslim world, the Shari’a court deals primarily with family issues. But there are different interpretations of the Shari’a depending on the location of the world that you’re in. For example, the West Bank is under a different Islamic school of thought to Gaza. Civil courts deal with issues not related to the family (criminal and administrative law). So, say a couple came into the Shari’a court having marital problems and there were allegations of abuse, they would be tried in the civil court. 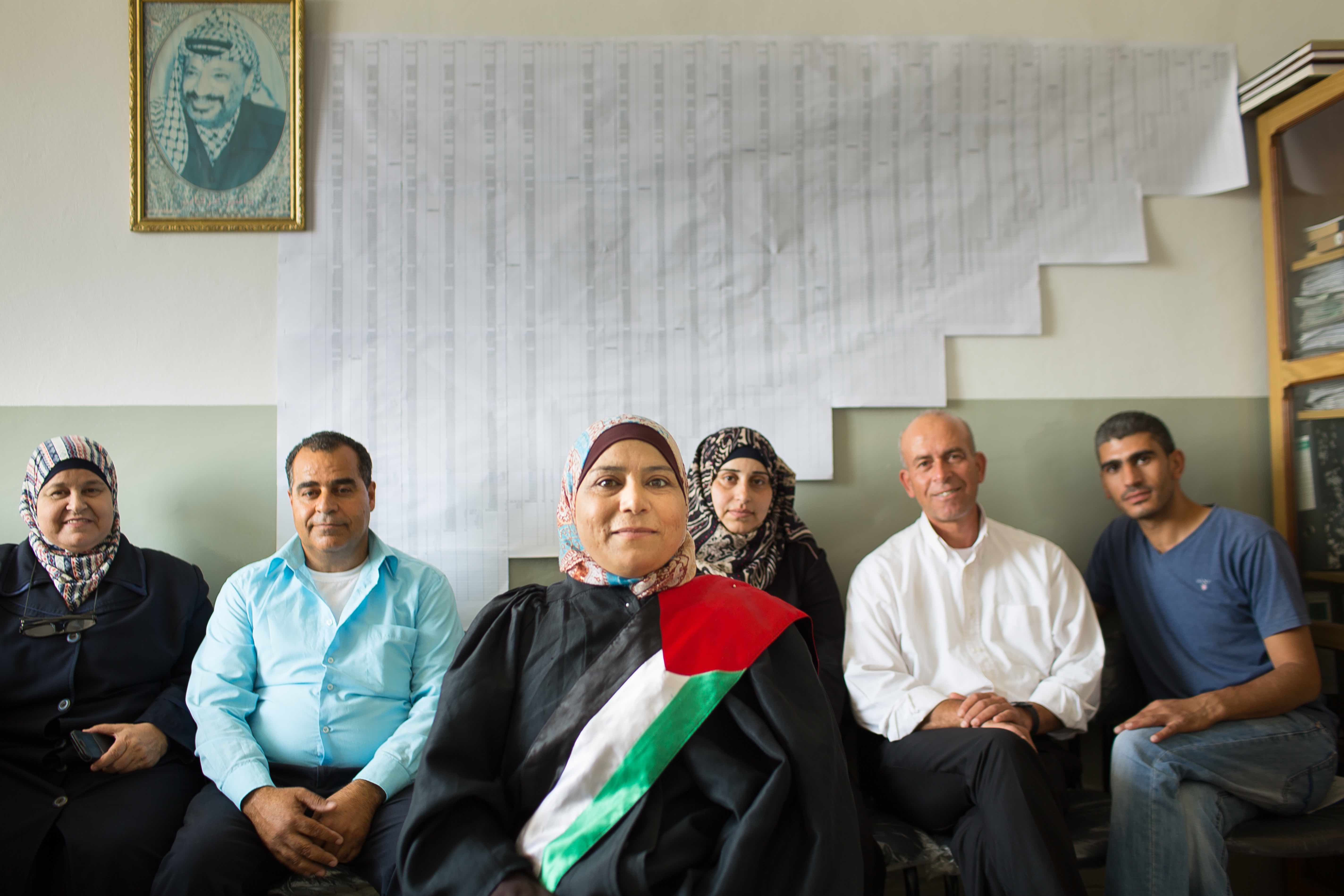 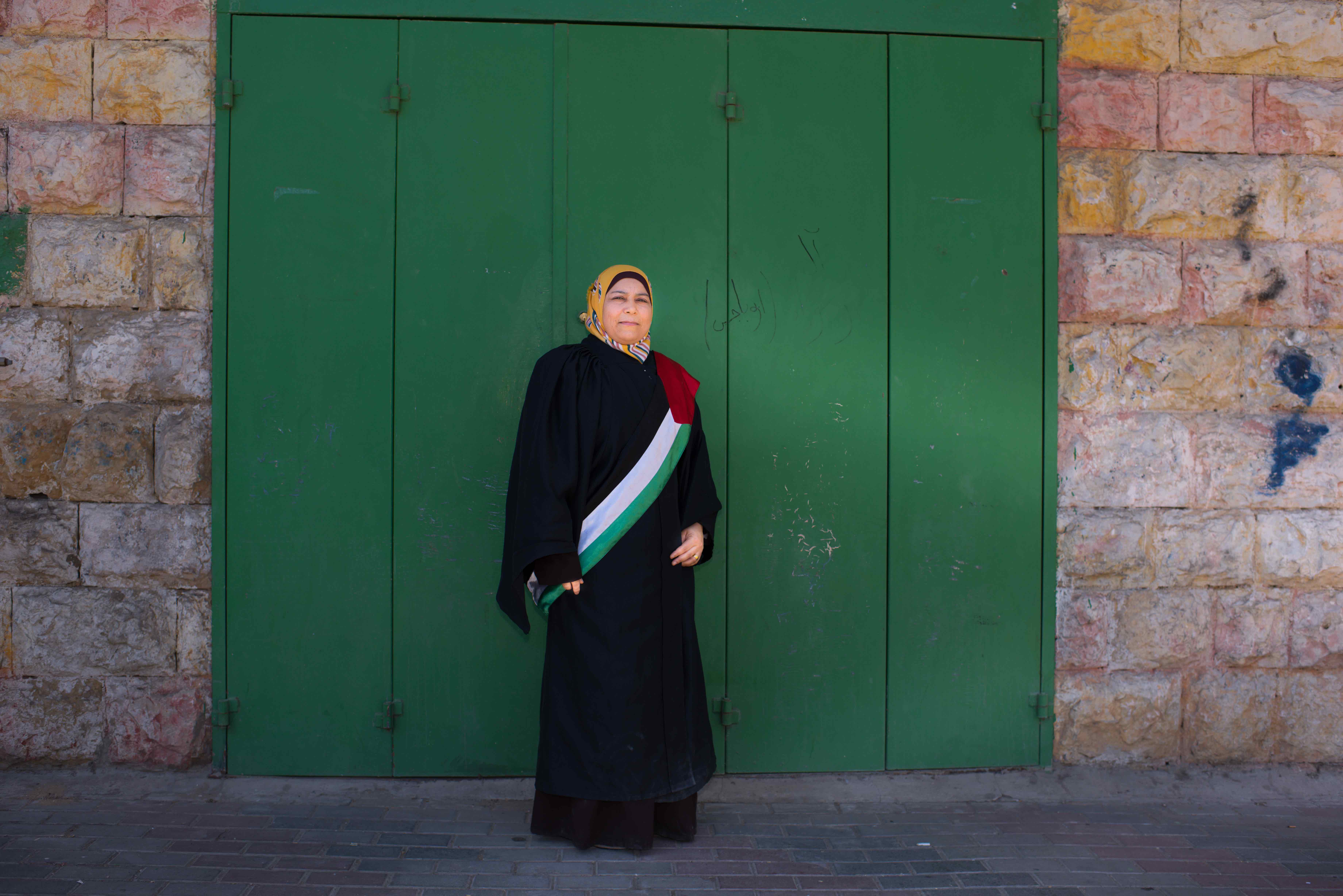 When you visit the Ministry of Women it’s incredible to see the number of women seeking change. Are there any laws Judge Kholoud is specifically trying to alter?
At the heart of it, Kholoud is fighting for equality according to the law and according to society; equality for men and women to be seen and to be treated equally. She worked really, really hard to raise the marriage age and worked really hard to pass a law that requires men to notify their first wife if they plan to take an additional wife.

Judge Kholoud was assisted into her position by the forward-thinking Chief Justice Sheik Tayseer Al-Tamimi, but then had her positioned threatened by Chief Justice Yousef Al Dais. Her place in the courts seems precarious. Does this concern her?
Kholoud is a master of compartmentalising thought and it’s pretty remarkable. When I have asked her if she feels uncertain about her future or uneasy about the leadership in the Shari’a courts she always says yes, but she never dwells on it. She wants to become Chief Justice one day and I believe she can do it. That has been her goal for a very, very long time. There are many obstacles in becoming Chief Justice, but I believe she can do it.

This film demonstrates the benefits to women of women being involved in the justice system – and yet the women you interviewed on the street weren’t convinced it was a good idea. Did you get any sense of whether the women who came to see Kholoud as a judge were grateful?
It is interesting. Some of the conversations I was having on the street in the West Bank were the same conversations we were having in the US during the Hilary Clinton campaign – are women too emotional to be judges? Are women too emotional to hold these positions of leadership? And it’s often women that have those perspectives as well, it’s not just men. I don’t see it as an issue that is unique to the Middle East or unique to Palestine, I see this as being a real global issue right now. Kholoud’s presence in the courts in itself provides an opportunity for women to feel more comfortable talking about the most intimate details of family life. It is more unusual for women to come forwards with allegations of domestic abuse in front of a male judge. I have definitely witnessed a difference in how women describe the challenges of family life or the challenges of a bad marriage or domestic violence. The level of detail in which they describe that to Kholoud versus a male judge is drastically different. In addition, lots of women didn’t know that they had rights according to the Shari’a, and it is Kholoud’s mission to educate women and to provide opportunities for women to speak to other women about their experiences. Outside the court room her job is always ongoing. 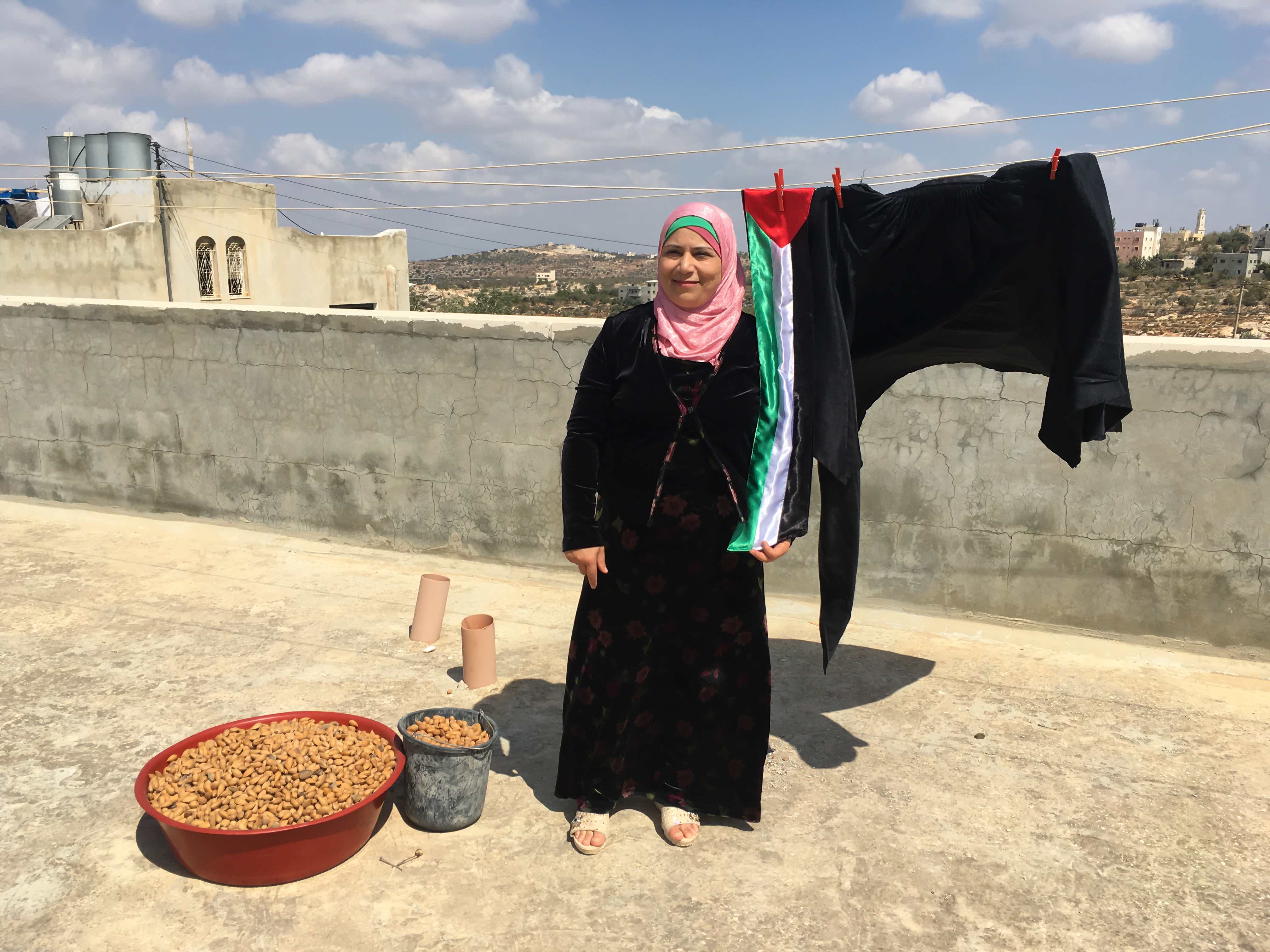 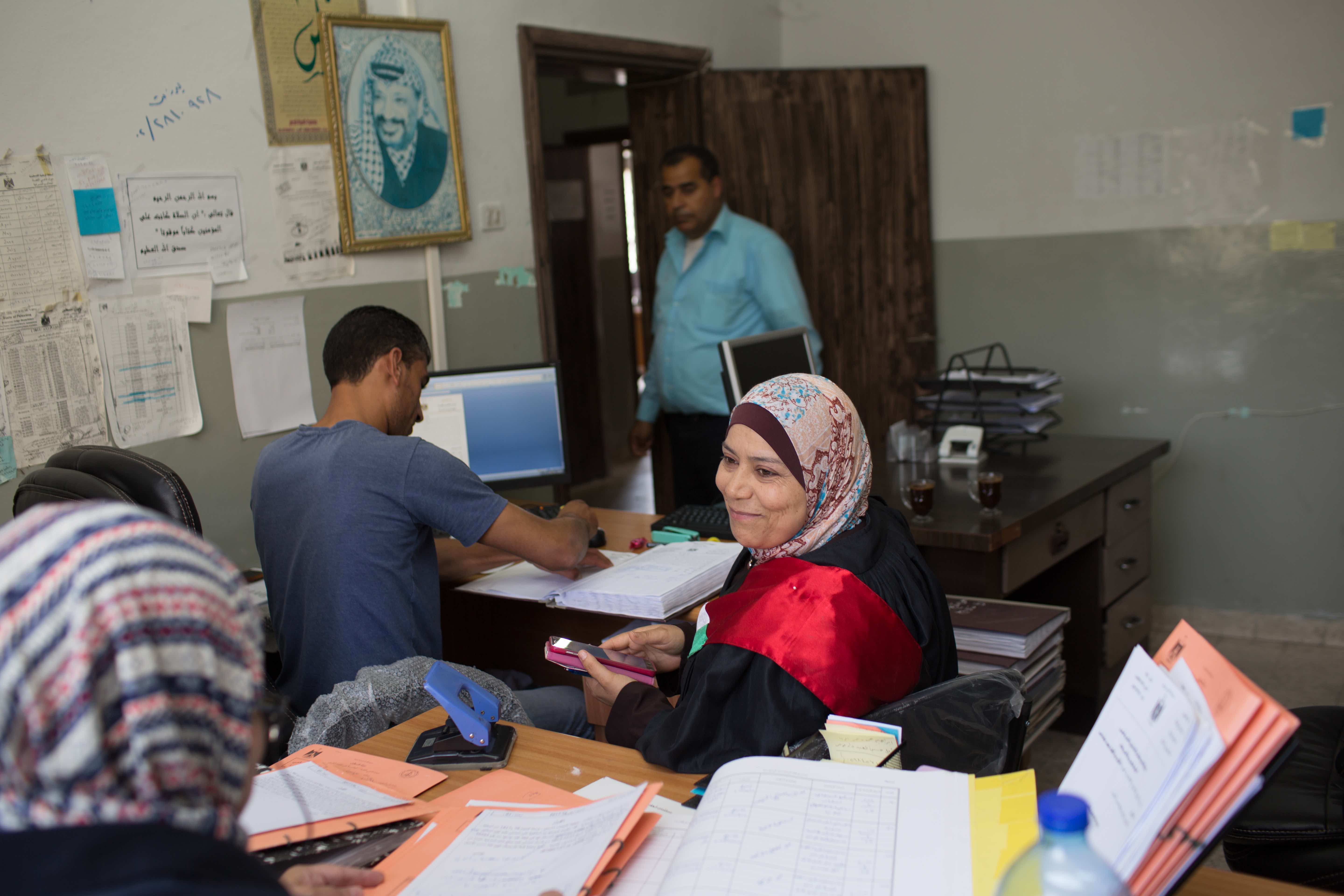 Kholoud’s father says “education is her weapon.” What do you think he means?
It is this beautiful scene, and her father says: “Education is a weapon for women. Education is a weapon.” He wanted to arm all of his daughters with education, and it was a profound moment that I think is so universal. Education really can be used as a weapon and we should be arming our entire globe with education. I don’t think it’s unique in Palestine for fathers to encourage their daughters to be educated in that way, or to push their daughters to be the best they possibly can be. Palestine has one of the highest levels of women who are educated in the Middle East.

Do you think education has been Kholoud’s weapon?
Kholoud is never satisfied with her level of education, she is pursuing another PHD right now. She has mastered English, and now she is learning other languages. Her kids are so brilliant, her youngest daughter wants to follow in Judge Kholoud’s footsteps and become a Judge. All of her kids love studying, and they love studying with their mother. It’s a beautiful thing.

How did people in Palestine respond to the film?
They love it, they have been incredibly supportive. It was important to me to show the vibrancy of life in Palestine, to show the warmth and the love. I wanted to transport viewers into this immersive experience and I did it through sound, colour and cinematography. It was important for us to see Palestine through aerial footage, but putting a drone up in the West Bank is incredibly difficult because you have a lot of limitations and you can’t put a drone up near a wall, a checkpoint or a settlement. But when we did it: people came running out of their homes saying, ‘thank you so much for showing the world a Palestine that they’ve never seen before.’

The Judge is available to watch in various locations around the UK. It will also be screened at Lush Film Festival on November 30.

Linkedin
RELATED ARTICLES
OTHER ARTICLES
Members of the collective share some of their reasons to run as part of #UnitedBySummits, a campaign that looks to uncover transformative power of the outdoors.
The situation in Afghanistan remains dire, with many groups facing persecution at the hands of the Taliban.
The revered showbiz chronicler recalls his journalistic beginnings, documenting subcultural scraps in the ’80s.
The government’s failure to take long Covid seriously has led to the formation of a group campaigning for the thousands of forgotten victims of the illness.
After news broke last week around an expected reversal of the 1973 landmark law that made abortion legal in the US, protestors gathered in the UK in support of American women.
Over the weekend, London locals came together to resist a pre-planned police raid targeting delivery drivers.