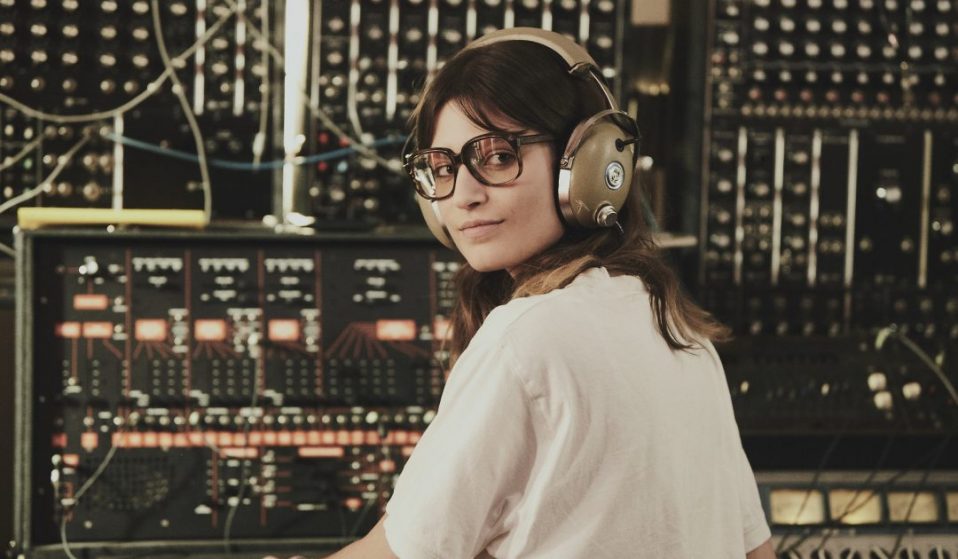 Nouvelle Vague frontman Marc Collin makes his directorial debut with The Shock Of Future: a filmic homage to the power of electronic music.

Nouvelle Vague frontman Marc Collin makes his directorial debut with The Shock Of Future: a filmic homage to the power of electronic music.

The Shock of the Future is set in Paris, 1978: a time when everyone chain-smokes, Jean Luc Godard posters adorn the walls, and people are consumed by giant glasses and shirt lapels.

Amidst these smoke-filled rooms sits Ana who, when not lost in the sounds oozing from her stereo, is a frustrated musician trying to come up with new sounds. She sits surrounded by giant analogue machines, trying to finish work for a commission that is already late as she’s hassled by men telling her what to do. Eventually, a new bit of equipment comes into her possession and she begins on a new sonic voyage of discovery, charting her own path and discovering a new sound in spite of what others say and think.

Directed by musician Marc Collin of the band Nouvelle Vague, The Shock of the Future is a love letter to the transcendent beauty of electronic music during a period when it was seen as radical and earth shifting in its possibilities. As you would hope, the film also has an incredible soundtrack; featuring the likes of Suicide, Devo, The Human League, Throbbing Gristle, Cerrone, Metal Urbain and Jean-Michel Jarre, as well as a stirring and immersive synth score from Collin himself. Playing Ana is Alma Jodorowsky (granddaughter of the pioneering filmmaker Alejandro Jodorowsky). We caught up with the pair to talk about the project.

Marc, why did you want to make this film?
Marc: I wanted to do a movie about electronic music because I’m a musician and really into electronic music. I love all the big modular Moogs and these machines. I thought there isn’t really a movie done around this scene or these kinds of artists – there’s a lot about jazz and rock, but not much about electronic music. Then I thought it would be great to do a portrait of a woman working in those times who was creating not only a new sound, but a new way of making music. I wanted to explore someone who was creating the sound of the future, a sound that we are still listening to now.

Was the film based on a specific woman making electronic music?
Alma: It’s inspired by a woman who existed for real, but it’s almost like a fake biopic of a woman that we fantasised and created. It was a character we wanted to create together that was a tribute to women from that era – the idea being that she would go on a discovery of both finding herself as well as her sound.

The soundtrack plays a large role in this film. Was it easy to assemble? Were you left with artists you couldn’t get?
Marc: At first I would have chosen even more underground things. I was more into Can and Tangerine Dream, for example, but my producer said maybe you should include some more popular songs. So I included Jean-Michel Jarre alongside the likes of Throbbing Gristle. Artists like Kraftwerk and Giorgio Moroder I would have loved to include but they were too expensive.

Music also seems to exist in place of dialogue in some scenes.
Marc: I wanted to have some sequences where we are only listening to music, so you can both see and understand how it is being made. I don’t feel like a lot of films show this process. Music scenes are often guys with a guitar, so it was really important for me to have sequences where it’s only music. 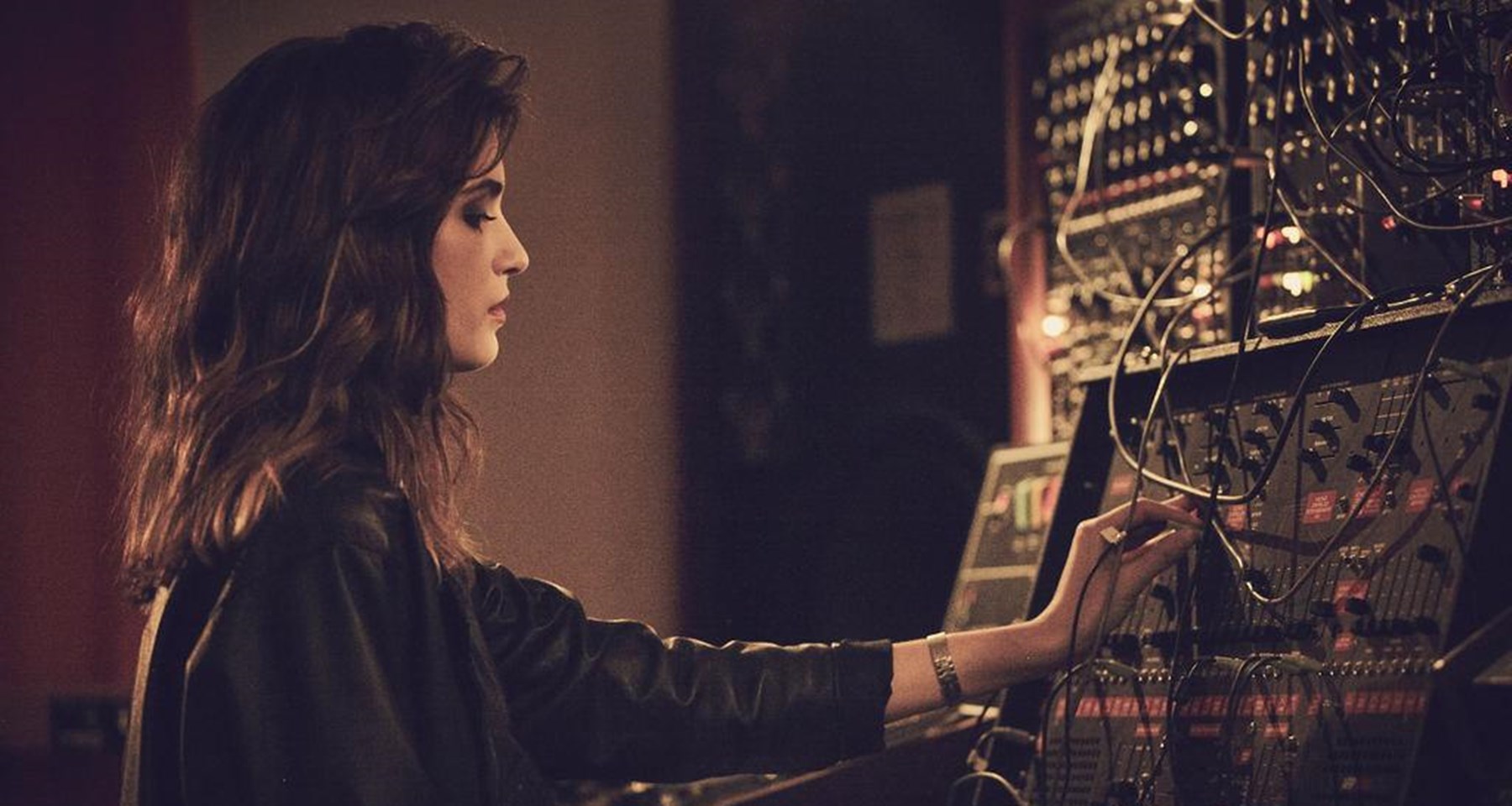 There’s also a real sense of intimacy that comes from this. It’s easy for anyone to make electronic music by themselves now using a computer, but back then access to the equipment wasn’t as great. We really wanted to capture this intimate exchange almost as like a religious experience.

Ana’s relationship to her music in the film seems like a counter to the one she has with all the men in the film, who are always telling her what to do despite being clueless about the technology.
Alma: Definitely. This, and the moments she spends with the singer Clara she collaborates with. They aren’t supposed to be working together but it’s something that becomes a really sweet moment because it would have been rare to have two women together alone on a project like this. There’s also a mutual admiration for one another, there is purity there to that relationship.

The film’s soundtrack is littered with artists who championed autonomy, innovation and forging your own path. Is there a link between these artists and Ana? Is that the message of the film?
Marc: Yeah of course, because I think a lot of people who feature on the soundtrack were all people who struggled but continued to express themselves and find their own audience. Bands like Suicide and Throbbing Gristle keep being discovered by new generations as these great cult artists but at the time they were hugely underground. But I also chose the Human League because of their story; they started with this kind of Kraftwerk style electronic experimental stuff and then they became huge. It’s a way to say never give up your ideas and your vision.

The Shock of the Future is in cinemas from Friday September 13.

Linkedin
RELATED ARTICLES
OTHER ARTICLES
Ahead of the policing bill reaching its final stages in the Lords, protestors came together to rally against the legislation.
Those set to be impacted by the governments ’undemocratic’ bill explain why it risks silencing them.
With abuse of call-centre staff on the rise, many are now speaking out about the hostility they’ve faced.
Hundreds gathered together to protest the policing bill by making as much of a racket as possible.
The musician, DJ and founder of Monika Enterprise reflects on a career defined by revolution and rule-breaking.
Jermain Cikic reflects on his experience of visiting the island of Samos, Greece, in the summer of 2021.