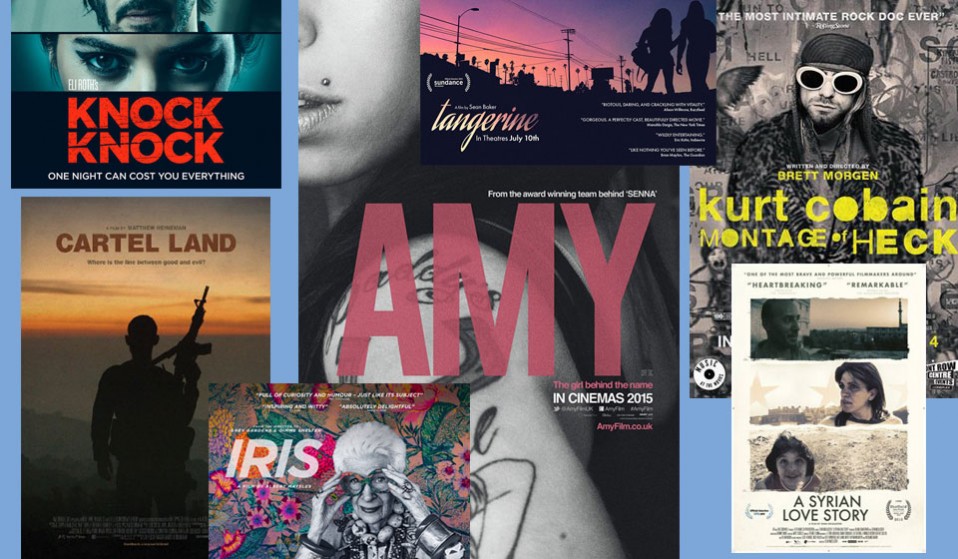 Documentaries really stole the show this year with disturbing dispatches from places like war-torn Syria, where families are fleeing in droves, and the middle of the drug trade in Mexico, where the authorities are no better than vigilantes. Strong women took their place at the top with self-named narratives such as Iris, about an incredibly influential elderly fashion icon, and Amy, about a rare star who would never make it to old age. Montage of Heck paid tribute to another 27 Club member Kurt Cobain and Tangerine told a bold and brash transgender sex worker story. Here’s some of our faves.

Director Sean McAllister must have had a sixth sense about the fate of Syria when he started filming this five-year opus about the journey of one family from before the civil war, through the revolution, into European exile. He unfathomably manages to capture some of the most traumatic events of modern history (the Arab Spring, the fall of Raqqa, the rise of ISIS and the ensuing refugee crisis) in real time, through the very personal lens of a secular family who are not just trying to survive, but trying to live good lives. The youngest child in the family Bob, is an ingenue through which the emotional impact of the crisis can be felt, heart-wrenchingly. (SJ)

Courtney Love approached Brett Morgen with the idea for this film in 2007, and gave Morgen and his team access to the entirety of Cobain’s personal and family archives: 200 hours of audio, 4,000 pages of diaries and home videos. When the film was finished, Morgen showed it to Love and Cobain’s daughter, Frances Bean, who is listed as executive producer; neither asked for a single edit. The film is an unfiltered celebration of Kurt Cobain’s life, giving viewers glimpses of him as a human being, not as a famous musician. Unlike other documentaries, Morgen’s film doesn’t focus on Cobain’s death, but is a celebration of his life. (MW)

Through profiling two charismatic but flawed vigilante leaders taking on drug cartels on opposite sides of the US-Mexico border, documentary Cartel Land explores what happens when government institutions fail, when citizens feel forced to take the law into their own hands and the ramifications of what happens when they do so. Although cartel violence does spill over into the US, the two movements are operating in very different contexts and the levels of violence between the US and Mexico are incomparable. Seeing their two struggles play out side by side leaves us to question who, if anybody, is really justified in taking up arms. (AK)

From director Asif Kapadia, who brought us the incredible and tragic racing documentary Senna – about Brazilian F1 legend Ayrton Senna – came another epic this year about controversial British singer Amy Winehouse. Patched together from intimate footage from Winehouse’s nearest and dearest, Amy is a difficult-to-watch insight into the rise and fall of a modern musical genius. She is as charismatic, and destructive, off stage as on but Kapadia takes special effort to consider the external forces that contributed to her untimely demise. Stand-out moments occur in the studio where Winehouse’s extraordinary creative process is laid bare. Beautiful and very sad. (SJ)

It’s been over a year since Time Magazine’s groundbreaking cover story on ‘the transgender tipping point’, but it’s still hard to see much truly radical progress in the mainstream transgender narrative. The kind that doesn’t bow to the fey, fragile primness of The Danish Girl, or the 24-carat glitz of Caitlyn Jenner. Which all makes Sean Baker’s Tangerine such an important departure, with its bold, brash, sexually aggressive and occasionally monstrous trans leads. The story of two sex workers working the scene on a long Christmas Eve, one just out of jail and in pursuit of the cisgender hooker sleeping with her pimp boyfriend, it’s a rapturous and wildly funny ‘day-in-the-life’ story. Shot entirely on an iPhone (though you’d never know it), Tangerine also builds to one of the most tender codas in recent film memory. (AW)

Iris Apfel is a designer, lecturer and fashion icon based in New York. If you don’t know her name, you’ll doubtless recognise her outlandish appearance, full of bright colours, her trademark oversized black spectacles and the seemingly disparate collection of patterns, jewels and accessories she drapes herself in. Iris chronicles her early beginnings as a textiles maven and subsequent entrance into the New York fashion elite, her plans to downsize the enormous collection of clothes she’s accumulated over the years, and her continued penchant for a good street-market haggle. It’s also one of the final documentaries directed by the late Albert Maysles, of Grey Gardens and Gimme Shelter fame, and a fantastic testament to his skills of observation. (AW)

A world away from the relentless grim of his Hostel movies is Eli Roth’s Knock Knock, an absurd, subversive throwback to ’70s exploitation pictures. Keanu Reeves is a hapless house-husband seduced by two Eurotrash vixens who knock on his door in the middle of a rainy night. But the morning after their illicit ménage, the women prove to be completely unhinged, literally tearing apart the fabric of Reeves’ all-American family home, initiating a deadly game to punish cheating husbands. Roth’s film starts off sexy and funny, before descending into frenzied, ridiculous mania capped by an appropriate rendition of the Pixies classic, ‘Where Is My Mind?’. (AW)

Linkedin
RELATED ARTICLES
OTHER ARTICLES
Documentarian Sean McAllister describes his long journey with a Syrian family during the unfathomable fall of an entire country.
Cartel Land profiles two vigilante movements who took up arms against drug cartels on opposite sides of the US-Mexico border, and asks what would you do in their shoes?
Brett Morgen explains how unprecedented access to the Cobain family archives took him on a powerful journey in search of the real Kurt Cobain.