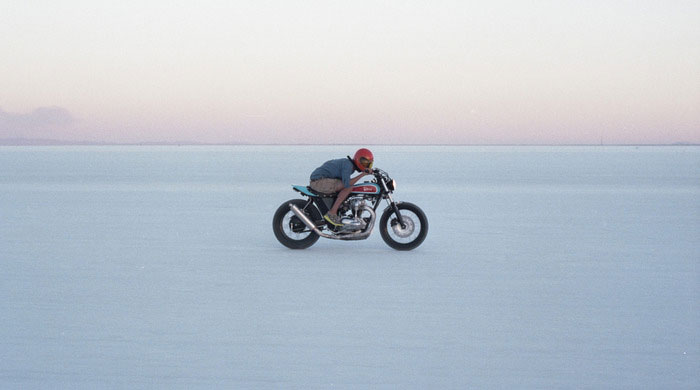 Custom motorcycle culture caught on 16mm, epic skiing with Buddhist teachings, an ageing skateboarder on downwards spiral and more in this year's celebration of the best new action sports films.

Custom motorcycle culture caught on 16mm, epic skiing with Buddhist teachings, an ageing skateboarder on downwards spiral and more in this year's celebration of the best new action sports films.

Savage Cinema is a strand of the San Sebastian Film Festival – September 19-27, 2014 – that deals with action sports-related features and documentaries.

Now in its second year, Savage Cinema aims to showcase the most exciting and progressive visionaries in the game and this year’s stellar line-up is the best yet.

Quite possibly the most beautiful motorcycle film ever made, The Greasy Hands Preacher is an 87-minute paean to the culture of custom bikes shot around the world – California, Utah, Nevada, France, Scotland, Spain and Indonesia – entirely on 16mm. With a mission statement to “explore the revival of manual work through the passion of motorcycle enthusiasts who have found their way to a happy life”, the film challenges us to rethink the importance we put on ‘intellectual’ careers and celebrate the beauty of quality manufacturing.

Danger Dave is a fictional film that deals with the most existential question in skateboarding: how the fuck are you supposed to get old? Chronicling the trials and tribulations of a professional skateboarder who is on his last legs, yet still has no desire to end his career, the film follows the five-year demise of a man – played by Carhartt WIP pro David Martelleur – who is unable to maintain a professional career as his life descends into a downward spiral of parties and debauchery.

The third, and final, installment of backcountry snowboarder Jeremy Jones’ Deeper, Further, Higher trilogy, traces Jones’ snowboarding journey from hiking Cape Cod’s Jailhouse Hill as a child to pioneering new descents in remote regions like the Eastern Alaska Range and the Himalayas of Nepal. In this denouement, Jones reflects on what all his adventures – which have earned him many environmental accolades – have taught him and showcases the skills and determination of his big mountain explorer-snowboarder friends.

On Any Sunday – The Next Chapter

Endless Summer visionary Bruce Brown made Oscar-nominated motorcycle racing documentary On Any Sunday in 1971. Now his daughter Dana Brown is revising the phenomenal athletes and revolutionary innovators documented 40 years ago and tracing their lineage to the present day. What does it mean to a motorcycle racer in 2014? This film is a true insight into the mindset of one of the most high-octane sports in the world.

To be a climber in Yosemite National Park in the ’60s and ’70s was to be at odds with the American Dream. A true story of the counterculture, these radical adventurers are immortalised in new doc Valley Uprising which captures the last 50 years of “explorers and madmen leaving materialism behind and venturing onto the high, lonesome granite”.

Days Of My Youth

This emotional film, shot over two years using state-of-the-art techniques and technologies, offers a “unique glimpse into the journey of self-discovery that every skier experiences”. Complete with narration of readings by British-born Buddhist philosopher Alan Watts, the visual poem draws parallels with Werner Herzog’s The Great Ecstasy of Woodcarver Steiner and seems sure to make you reassess your dedication to your passions.

Find out more by heading to the San Sebastian Film Festival website.

Linkedin
RELATED ARTICLES
OTHER ARTICLES
Over the weekend, the United Families & Friends Campaign organised a protest calling for an end to deaths at the hands of the police.
A campaign led by ex-torture survivors and refugee organisations has left the Tories with no planes left to carry out their callous scheme.
After voting to strike across England, prison teachers explain why they’ve been pushed to a breaking point.
We catch up with the singer in her London studio to connect the dots between music, painting and her relationship with the city.
The Egyptian government are continuing the repressive mistreatment of environmental campaigners.
Whether it was seacoalers in Northumberland or the miners’ strike, the photographer was always fully immersed in the story he sought to capture.