Surfer and filmmaker Cyrus Sutton turns his lens to the Hawaiians fighting to protect their sustainable way of life in the face of mass-industrialisation.

Surfer and filmmaker Cyrus Sutton turns his lens to the Hawaiians fighting to protect their sustainable way of life in the face of mass-industrialisation.

Cyrus Sutton is a big fan of independence. In the past decade, the California-based surfer-filmmaker has been building, among other things, a van from scratch alongside a quiver of hand-shaped wooden boards, spearheading a return to surfing’s anti-capitalist, DIY roots.

He’s also built a reputation for himself as an accomplished documentary director, making beautifully crafted films on surf and sustainability (see Korduroy.tv if you’re curious). He’s motivated by – in his own words – a mix of a wanting to learn and “the challenge of putting a story together”.

Narrated by local scientist Cliff Kapono, Island Earth is the product of the latest story Cyrus set out to tell. Delving deep into the heart of the Hawaiian food crisis, the film offers a nuanced and personal look into the complex relationship between the agricultural companies that have settled on the island and the local activists being forced to fight back; reclaiming Hawaii’s ancestral forms of cultivation and declaring independence through self-sufficiency.

How did you first come across the subject of GMOs in Hawaii and why did you decide to make the documentary about them?
I’d gone to Hawaii on surf trips before, when I was younger, and it always felt like I was taking – not integrating much with the community there. I’d heard about the protests against Genetically Modified Organisms that had been happening, and the grassroots legislation that was being drafted, all around trying to kick certain large agricultural companies out of the area.

At the same time, I was looking for a topic for a new film that was broader than just surfing. With that idea in mind, I went over for my first trip and… I learned a lot. I was kind of overwhelmed by the complexity of the issue, but I decided to set up a Kickstarter for the documentary and go from there. I’ve been working on it for three years.

Talk me through the process of creating a documentary with such a massive issue at its heart.
I knew that the audience for this film was mostly going to be people who eat organic and who think GMOs are bad, who think Monsanto is bad. But in making this film I learned that the GMO issue isn’t black and white.

After talking with a variety of scientists and farmers I realised I had to check my preconceptions at the door. This allowed for a more nuanced answer to reveal itself and the end the film reflects this. 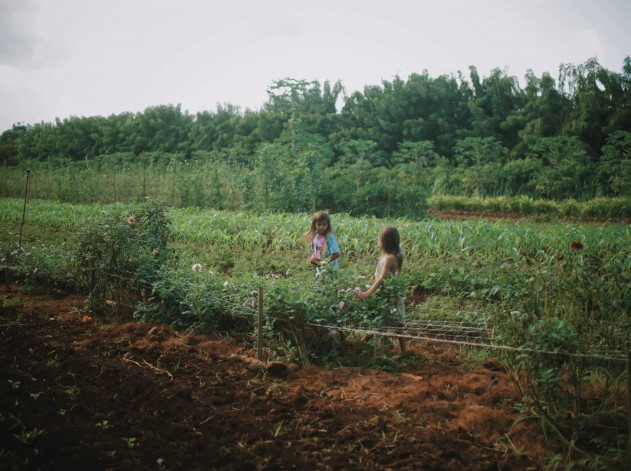 Why did you choose Cliff Kapono as the narrator?
Cliff and I met organically through surfing, at my own home in San Diego during the time he was finishing his PHD. Because we met so long ago I hadn’t really envisioned him being the main character – when you’re exploring a new subject, you don’t feel like somebody you surfed with and met in your hometown would be the best narrator of a film about a completely different place.

I looked for someone to try and thread the story together for two years, and I just kept coming back with the idea that we needed somebody on the inside who shared the experiences shown in the documentary. I didn’t have access to employees who worked for any of the companies, and I couldn’t trust what they were saying would be unbiased, but I knew Cliff since we had that surfing connection. He’s also a scientist, so he became the narrator and the connection between everything.

Having a personal insight, but still not making it biased?
Yeah. The culture in Hawaii is very closed, and the people who work for those companies, they have their own justifications for working there, and they definitely don’t share those. Be it for fear of being attacked, misunderstood or maybe just their own consciousness. 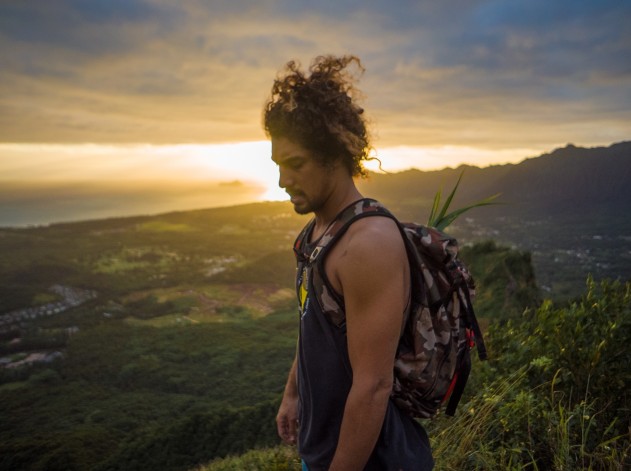 How do you feel the community changed over the three years you’ve been filming?
The people in Hawaii started this process not knowing too much about policy and being pretty insular – a lot of Hawaiians don’t even recognise the United States as their government. I think this issue has inspired the people in Hawaii to look at civics on a local level and engage with policy; they’ve educated themselves about how their government works at a state and county level.

I think they understand that actions, such as growing their own food, building their own shelter, celebrating their culture are an acts of resiliency and acts of sovereignty. But at the same time, they now also understand about working within the system and how to leverage grassroots momentum into shifting laws that affect their lives. 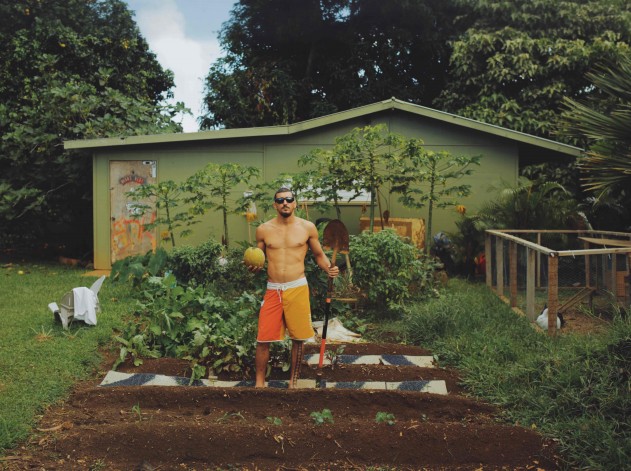 You’re considered a figurehead of the DIY movement in the surfing community – do you see a parallel between what you’ve been doing for the past decades and the actions of the communities shown in the documentary?
DIY is such a broad term – I think true anarchy is really about both growing your own food, and creating art or acts of expression that are subversive. True anarchy isn’t about rioting in the streets and violence, it’s lessening dependence on an ever-growing and ever powerful central state.

I think all of these actions are reactions to a way of life where we’re increasingly dependent on the state to provide everything for us. It’s about taking these necessities back into our own hands, even if they might not be as slick – because we know where it’s made, we know the environmental cost, we know that we make it ourselves. Those resources are going back to the community, instead of providing more power to something that we don’t always agree with. 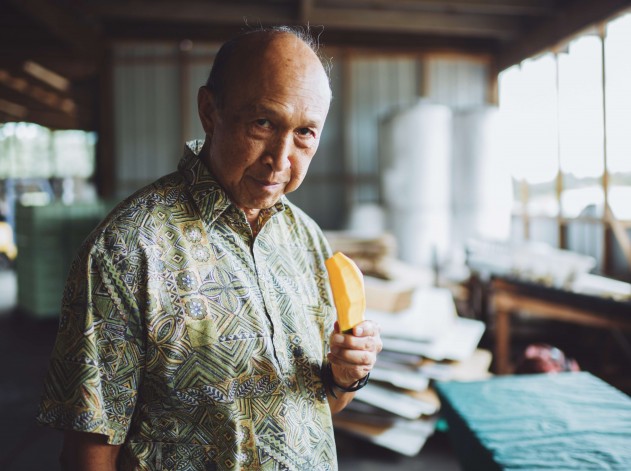 Dennis with his GMO Papaya

Why should the surf community care about sustainability in Hawaii?
Surfers in Hawaii are becoming more and more active about the resources that allow them to live, experience and enjoy the ocean. Hawaii’s a unique place because it’s so finite. The land is such a small inhabitable space in a vast sea, and in order to insure their long-term survival, Hawaiians need to protect it.

Surfers interact intimately with our environment, because of this we too are forced to recognise the affects of our civilisation. For myself as a surfer questioning the path forward, Hawaiian values offer a blueprint of how to interact with the places we love. 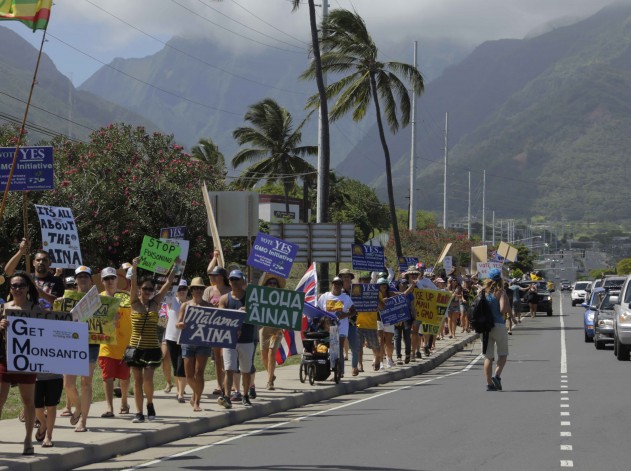 What have the reactions to the documentary been so far?
They’ve been great! I was nervous because it’s such a complex issue, and I’m not Hawaiian. There’ve been a lot standing ovations, some hard questions being asked within the community about how they can replicate it and take what’s being shown on the film. Although it is a locally focused film, I think the efforts of Hawaiians to reclaim their food sovereignty and push back against very large corporations evoke a common feeling, that is easy to relate to around the world.

I’d hope there’s more conversations about resource management, especially around Southern California, where the water is so scarce and the population is so dense compared to the carrying capacity of the land. I think there’s going to be conversations about organising at a local level and creating community. It doesn’t matter if it’s in Australia or in Massachusetts these issues will spark a common dialogue.

Linkedin
RELATED ARTICLES
OTHER ARTICLES
A group of Ukrainians living in Poland are helping Ukraine withstand Russia’s brutal invasion by buying supplies and shipping them directly to the war’s frontlines.
The government is scrapping the Human Rights Act in a move that will hit marginalised people hardest.
Following the release of his newly republished 1991 book, Redheads, the American photographer reflects on his celebration of ginger people and their magnetic power.
After news broke last week around an expected reversal of the 1973 landmark law that made abortion legal in the US, protestors gathered in the UK in support of American women.
Our new magazine is here, starring the inimitable Mitski. Order your copy now and join us on a trip around the world.
In the latest OFFF Dispatch, the enigmatic designer dives into his process, connecting the dots between his unique and varied creative output.