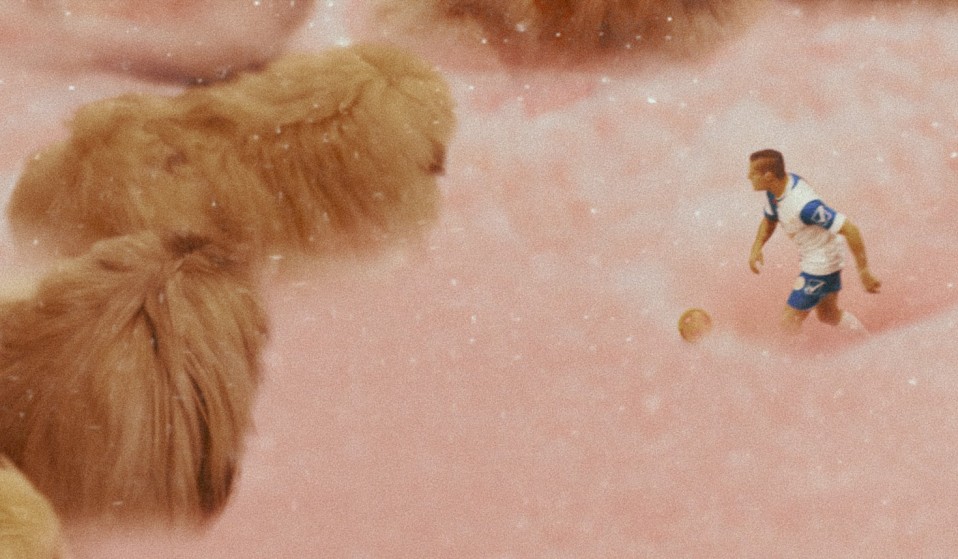 We sit down with Portuguese-American filmmaking duo Gabriel Abrantes and Daniel Schmidt to discuss their endearingly bizarre debut feature – one of the most exciting films to screen at this year’s Cannes.

We sit down with Portuguese-American filmmaking duo Gabriel Abrantes and Daniel Schmidt to discuss their endearingly bizarre debut feature – one of the most exciting films to screen at this year’s Cannes.

Diamantino is the debut feature from Gabriel Abrantes and Daniel Schmidt, a Portuguese-American double-act, previously best-known for their experimental queer shorts.

The film’s world premiere, taking place in the Critics’ Week strand of the Cannes Film Festival, marked a colossal expansion into wider public consciousness. This big-hearted depiction of a star footballer – the titular Diamantino – whose losses lead to a journey of discovery into life beyond his fame-bubble won hearts and minds, while still existing out on the limb of wild imagination.

“If our films try to carry any flag it’s the flag of ambiguity,” says Gabriel Abrantes, the more talkative of Diamatino’s two directors. The other, Daniel Schmidt, is wearing coral nail varnish when we meet for a 15 minute blast of a conversation before the joyously unlikely news that Joachim Trier’s jury awarded it the Grand Prize, making it the 2018 winner of Critics’ Week.

I don’t want to ask questions too specifically about the film because it’s good for people to discover it, so I’m going to ask about thematic stuff. What was the inspiration for the bodily and sexuality subplots?
Gabriel Abrantes: Daniel and I have always made films that talk a lot about gender, sexuality and especially ambiguity. Even in our narratives, and in the genres that we use, we’re trying to make a mix of genres, something that’s not one clear thing. If our films try to carry any flag it’s the flag of ambiguity. That’s what we’re really interested in.

People are always asking about the scenes with refugees or the propaganda campaign, the more obvious political moments. For us, that’s the context that this one character, this naïve hero Diamantino, is operating within, but the most political scene is the last one when he’s on the beach and has his new body. He’s transitioning from man to woman.

The reason Diamantino is a hero for us is that his simplicity allows him to be open enough to accept an ambiguous position. He doesn’t consider himself a trans-woman. He’s in a limbo but he’s open to that.

You mock Diamantino a lot, but you also clearly love him.
GA: That makes me really happy to hear that you feel that love.

How do you create that tonal balance between mockery and love?
Daniel Schmidt: We conceived the film from the beginning wanting to satirise celebrities and celebrity culture and the way that they integrate with the rest of the crises of today, but also to lift them up. These characters are often denigrated by the public, whether they’re Lance Armstrong, Cristiano Ronaldo or Madonna, and we wanted to raise them up into mythological characters.

Is Carlotto Cotta, the actor who plays Diamantino, usually in such incredible shape?
GA: He was with a personal trainer for, like, three months. He’s a strong, beautiful actor, but he worked really hard, physically and mentally, to transform himself. He was only eating almonds, nuts – no carbs for two months.

So he didn’t eat waffles with Nutella and bongo juice like Diamantino does?!
GA: We took that from Michael Phelps, the Olympic swimmer. He says that he only eats pizza, so that was our reference. And also Britney Spears. They asked her what she eats and she’s like, “I don’t know… Doritos? Oreos?” I always found that very funny.

Coming from the UK, the nationalist campaign to leave the EU resonated a great deal. Is this a fate that you feel is also on the cards for Portugal?
GA: No, actually we’re one of the only states in Europe which has a Communist Party in parliament. The extreme right-wing is very feeble in Portugal in contrast to many other countries, but it was a topic that we really wanted to broach more broadly about Europe and about the States.

Our propaganda campaign was based on a real Brexit one. Specifically, the UKIP advert that starts with a hospital disintegrating into dollars and then those dollars fly to Europe from the UK, and there are arrows pointing at the money going away. Our little van is a version of that bus that went around saying that you send the EU £350 million per week.

I was at Critics’ Week screening where you described the film as “overstuffed” with ideas. Were there any limits or were you very open to just adding stuff
GA: There’s a tonne of ideas and if all of these ideas do manage to be packaged as a whole film to make sense then it’s because of the character and because of Carloto. One of our biggest references was Au Hasard Balthazar, the Robert Bresson film. Diamantino is kind of like the donkey.

There are all of these social and political pressures impacting this poor star that he’s oblivious to and innocent to. He isn’t responsible for any of these things, or he might be but by proxy. That story, this innocent creature at the middle of the bunch of conflicts of today is really what ties everything together.

Is he a symbol, or can a person actually be that innocent in real life?
GA: I think a lot of people are. We based it on some stories about real sport stars. There’s this one text by David Foster Wallace called ‘How Tracy Austin Broke My Heart’. Tracy Austin was a tennis star. She was on the cover of Tennis World when she was 14. She won the US Championship when she was 16, won Wimbledon when she was 17. Then she got in an accident and couldn’t play any more and she wrote a memoir.

Wallace went to get the memoir because he’s a big tennis fan. He was trying to find the secret to her genius. On page one it’s just her saying how important her family was, and teamwork, how not important money is, how important working hard is, all these banal cliches, and at the end of the book it’s the same but in between it’s just a totally empty book for 200 pages.

He understood that to be a sports-star who can react to 120 km/ph tennis balls coming from the opposite side of the court – with 40,000 people watching you – in a split-second, you have to be in some way autistic. I do think that there are people whose way of seeing the world is far more pure in a way.

Finally, what were the breed of the giant puppies that Diamantino hallucinates?
GA: They’re called Pekinese.

What were the logistics of creating those hallucinated images of the Pekinese?
GA: Originally Daniel wanted it to be piglets.

Why did you want them to be piglets?
DS: Pure intuition. Just a base desire.

GA: Then we discussed doing dogs and the production company got these Pekinese which are the most ridiculous dogs. We asked for any kinds of cute puppies, but they got this breed so they really nailed it. The owner brought them to the green screen studio, he brought seven but he had 20 more at home, so he has a whole army of Pekinese and he really takes care of them. He was always combing and perfuming them on set.

Linkedin
RELATED ARTICLES
OTHER ARTICLES
The musician, DJ and founder of Monika Enterprise reflects on a career defined by revolution and rule-breaking.
The New York MC reflects on his experience with Trumpian US immigration policy, and how it impacted his career.
Hundreds gathered together to protest the policing bill by making as much of a racket as possible.
While the Colston 4 verdict is worth celebrating, it‘s debatable whether the law would’ve had such empathy for Black people in the same position.
Photographer Alice Mann reflects on capturing the camaraderie and discipline it takes to succeed in a highly-competitive sport.
From Brooklyn gang members, to Welsh miners and the residents of East Harlem, Bruce Davidson used his camera to shine a light on the most marginalised.