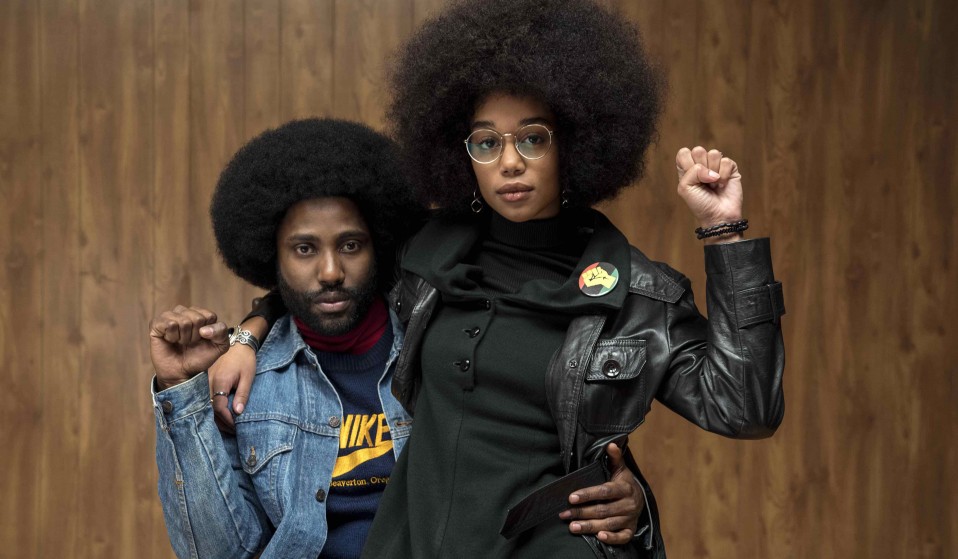 Social critiques are the unifying factor in this dispatch. From lesbians in Madrid, to pregnancy outside of marriage in Casablanca, to being black in white America, the following three films are reminders (as if we needed them) that societies too often unfold along inhumane lines.

While – to quote Jenny Holzer – “abuse of power comes as no surprise” what does enervate is the application of cinematic techniques to stories of injustice or the alchemy of activism into art. All three of the feature films covered below possess moments of transcendence, through beauty, character or comedy in unexpected places.

And some folks reckon that the third film in this dispatch, BlacKkKlansman by a certain Spike Lee (ushered in with the intertitle “THIS JOINT IS BASED ON SOME REAL NEXT SHIT”) may win the big prize here in Cannes.

For her first solo feature film, Spanish writer/director Arantxa Echevarria levels broad stroke criticisms at the socially regressive attitudes of a gypsy community in Madrid. Using a cast that, with one exception, is from this milieu, Echevarria bluntly sets out the rules for young women in her vision of this world: marriage, loyal service to husband, and domesticity. They are certainly not supposed to fall in love with other women.

Carmen (Rosy Rodriguez) and Lola (Zaira Morales) have a meet-cute in a thunderstorm. Lola is tending to the family fruit stall. “Wake up,” says her mother, noticing that Lola has been struck dumb, but not realising it’s because of Carmen. In a masterstroke of romantic understanding, the sound levels of the film are turned down, as the girls lock eyes, and the rest of the world fades away. Pilar Sánchez Díaz shoots close-up on different parts of Carmen to reflect the smitten gaze of Lola. In the background, bright yellow bananas are splattered with rain.

Carmen & Lola is a headily shot film in thrall to the beauty of its lead teenage actresses. There are too many striking compositions – utilising light, colour and love – to mention. Teresa Mora does vital work as costume designer capturing a look that only the young and tight-skinned can make glamorous: garish halters tops, ass-skimming denim cut-offs, diamante for years. Rodriguez and Morales are complementary in looks and temperament, and the hair-raising chemistry between them is a visual study in tenderness. Where the film is less impressive is in the shrill pitch of how Carmen and Lola’s nearest and dearest react. While these two girls are characters, those around them are cliches.

Out-of-the-blocks Meryem Benm’Barek-Aloïsi lets you know which aspect of Moroccan society her Casablanca-set tale of teenage pregnancy is going to tackle. An extract from the penal code appears on screen. Article 490 stipulates that sex out of wedlock is punishable by one month to one year in prison. Inevitably, Sofia (Maha Alemi), a sullenly expressive woman-child, gives birth within the opening stretch. She is in denial over the existence of the baby virtually until her waters break, a defence mechanism activated by fear of her parent’s reaction, as a sympathetic medical professional tells her later. To avoid jail-time for Sofia, and defend their own honour, her family focus energetically on trying to score a husband for a shotgun wedding.

This contained and lowkey film sometimes succumbs to stasis as a result of bluntly literal dialogue and a narrative which centres Sofia at the cost of a richer breadth of worldbuilding. Alemi is engagingly watchable, giving a performance that is totally without vanity. She doesn’t crack a smile until half-way through, and her go-to look is hair scraped into a pony-tail and a rotation of block-coloured hoodies.

Still, just as the film seems to have made its bed as an exercise in social realism by numbers, there is a twist. Audience patience is repaid with the revelation of something unexpected about our leading lady which drives home the fact that when marriage becomes a strategic and loveless decision, the very thing being defended – honour – is destroyed and the acceptance of deep soul corruption normalised. By the finale, a wedding day celebration, Sofia is loaded with chilling duplicity.

Spike Lee is competing for the Palme d’Or with an unabashed state-of-the-nation address. Set amid racism in 1970s America it takes aim at present-day America, with knowing nods eventually leading to a furiously upsetting coda of footage from the the white supremacist rallies which ended in violence and death in Charlottesville in 2017.

Adapted from a 2014 book by Ron Stallworth, Black Klansman (the additional lower case ‘k’ is Lee’s own provocation) details the implausible true story of a black cop managing not only to join the Colorado branch of the Ku Klux Klan, but to become one of its brightest stars and a regular telephone confidante of the Grand Wizard, David Duke (Topher Grace).

Denzel’s son John David Washington steps up to play Stallworth, whose infiltration is enabled by a white police colleague acting as his proxy in meetings. As an additional twist this colleague, Flip Zimmerman (Adam Driver), is Jewish. He“passes” amidst most Klansmen but has to endure the suspicious threats of glassy-eyed loose cannon Felix.

This is satire at its most tragic. Lee skewers his oppressors’ values by having them speak in torrents of hate speech. This racist abuse is brushed off, and even parroted by undercover Stallworth, who is riding high on the glee of duplicity. Juxtaposed against his private victories are the values of the more explicitly freedom-seeking Black Power movement.

BlacKkKlansman ends up as a seething mass of contradictions: a history lesson and a contemporary address; a multi-faceted comedy and a blunt depiction of hate.

Linkedin
RELATED ARTICLES
OTHER ARTICLES
Thousands attended the annual event this year to wheelie through the city and call for ‘knives down, bikes up’.
By turning a real-life crisis into daytime television fodder, TV bosses have once again shown themselves to be completely out of touch with audiences.
Financial turmoil is pushing people who work in the sex industry into more dangerous and desperate situations as a means of survival.
Rhiannon Adam spent three months capturing an ageing society wracked by division, isolation, and the aftermath of scandal.
In his 2008 series, the photographer pictured himself as Angela Davis, Martin Luther King Jr., Malcolm X, and other prominent figures.
For over a decade, gamblers have won big by employing people to place live bets from the court. But does this dubious method still work?